It had been a a stormy night previous with a huge storm sweeping the Irwell Valley, being out in it was quite refreshing to be honest but my plans for fishing on Thursday, i knew, had been scarpered.

None the less i decided to go for a walk on my stretch to clear the debris that had no doubt flooded down with the flash flood, it had been a short burst of rain so the water level had almost returned to its summer level within 12 hours.  The water was still thick and colored from the overflow pipes according to the smell, visibility was less than half a foot but i had still took my rod with my 'just in case'. I worked my whole stretch clearing debris and several trees, i even hooked a few under the water in the pools and somehow landed full tree branches on 4lb line. Why won't it hold a damned fish when i want it too?

I reached the end of my stretch where i hit my first bite and caught a very small trout, nice purplish hue however, couple of metres upstream and i hooked and lost a second.  Was happy with that considering the conditions and i wasn't really out fishing.

As i was out i decided to walk the canal and was greeted by carp, carp and more carp. Switching to a white cased caddis nymph which looked like a big white maggot and using a twist on indicator as a 'float' i cast in front of them. There was a hive of activity all down the stretch from carp and tench and my indicator was bobbing up and down under the water as something was clearly playing with it.

With no solid takes only brief hits 2 older gentleman arrived, map in hand.  They were from Stockport and was trying to walk from Moses Gate to Ringley but had got lost, thanks to previous bad directions from earlier. Luckily i showed them there route but not before i let them try on the poloroids so they could witness the activity they were missing.

Not long after they had gone i had a take and caught a very small perch, this was what was probably playing with my fly for the past half hour.  Then one of the paler carp swam under my indicator, round and round, before sinking into the murky waters, the indicator went under and i struck. I had a damned carp on, i was aware of my 4lb line and the sheer size of the carp but was surprised to see it not fighting but swimming slowly off. Unaware why i kept the line tight and tried to steer it towards me, and as it's head turned the hook came out.  The fly must of literally just been right on the edge which is why it wasn't too bothered.

Not long after it began to rain, i knew this was here to stay for a bit so i headed off home. Hopefully my stretch will be debris free still next week.

Oh and clearing the debris i caught my waders and almost ripped the whole leg off. So looks like i need some new ones. Again. 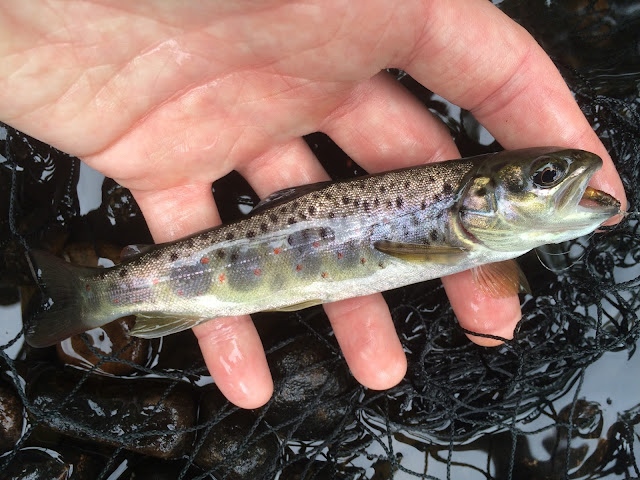 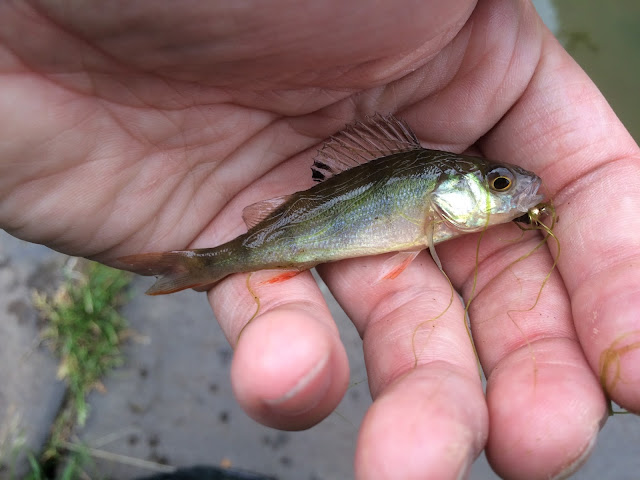