Had made plans with Mark who I've fly fished with previously to check out a new stretch of the river, Google maps can only give you an outdated perspective of what to expect and upon arrival in a heavy fine rain we made our way through the overgrowth to the river. It was alot narrower than we had fished before as we were in the upper reaches of the Irwell but it was clean, alot of plant life lined the banks and in the river which would make for tactical fishing.

We had arrived at a footbridge but we decided to head downstream a little to fish under the bridge only to spot a nice 'fishy' looking run, a small weir with bulrushes and cow parsley lined the banks. After planning our method of attack, Mark below the weir and i above we fished our way around the sides and channels. Both using the klink and dink at barely a foot as the water was shallow.  As i reached the weed bed at the top of the pool i looked to check on Mark, the river bed was slippy were the rocks were and very silty, suddenly i felt a hit and i turned to see my klinkhammer shoot under the weeds to the left, 'I'm in' i laughed, what felt like a trout pulled me deeper into the weed and with a sort of jump in the weeds it lost the hook and gave me a nice blob of weed.

A great start, was going to be pulling them out all day if it was like this. However, it wasn't. We both worked our way back upto the footbridge but saw no movement. Despairingly i checked under rocks, nothing, nothing, 2 decent freshwater shrimp, cased caddis. Interesting. So it seemed there was little food but it was big, but then again i only checked one section. With nothing to report after the first hour we decided the weed was choking the river to much and decided to trek downstream. 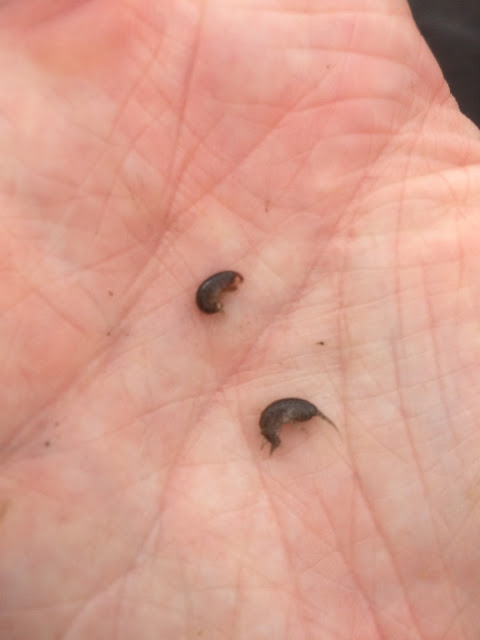 We followed a sort of path till it began to lead from the river so we headed through 6ft+ grass trying to find the river again. I lead the way being 6ft 8 i could see the direction we was heading.  Once we reached the water we discovered a strange tree, twisted and torn it wove itself like rope.  With the grass being shorter on the opposite bank we scaled the tree and climbed across.  Agreeing to head downstream for more of a mooch than fish, as it was new water we wanted to find where the best spots where and despite it all looking good with clarity of the water and the depth pretty much showed us there was nothing there. 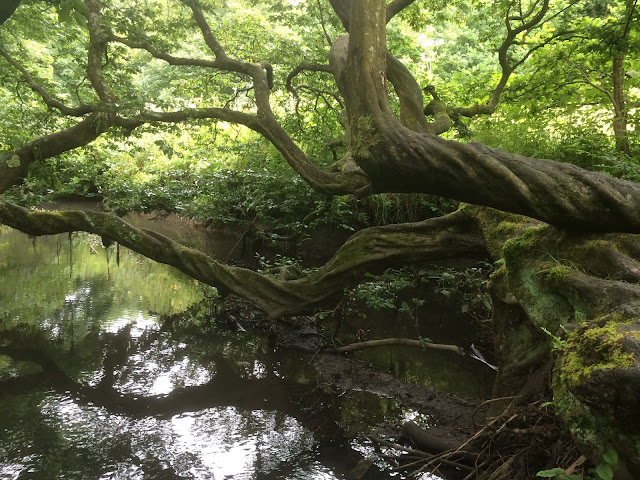 Finding a small clearing we edged to the bank to check it out, in our horror we saw a large trout easily 6 or 7lb spook and swim downstream. Damnit! it had been on our nearside so as we had edged to the bank we had scared it, if it had been on the opposite side we would of seen it.  We followed it 20m up the river until we found it again, Mark seen it swim under a willow so we positioned our selves at either side of the swim and tried to tempt it out.  As i watched i noticed a shoal of silver fish feeding on the bottom, roach? dace? they would not look at the fly though so i switched my olive to a red copper john, it hadn't been in the water long when i saw a fish swim from under the tree and grab my fly, i struck! i was in! but not to what i expected. it was a perch! first perch from a river so i wasn't bothered at all. 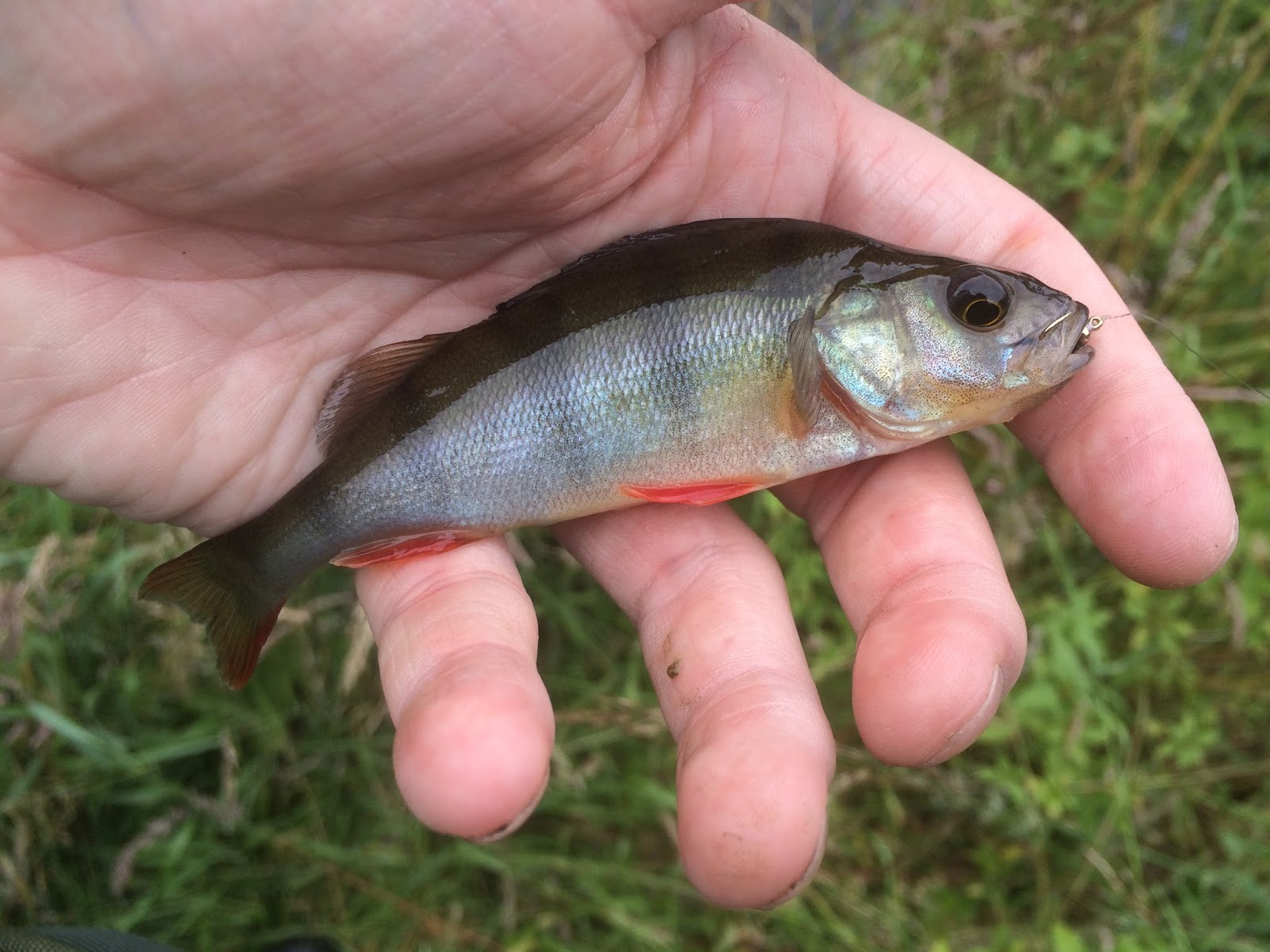 i tried to tempt the silver fish to see what they were but they would not give up the food from the bottom. a  kingfisher sped along past like a motorbike on the highway  We continued downstream round the bends of the river, until we met a fence, crossing over we had to duck under a pipe barely above the water but that wasn't the last of our limbo moments.

We fished a few spots downstream but still nothing, removing rubbish, trolleys and full trees that blocked the flow and were in danger of damming it up with any future rain until we reached another footbridge. this was barely 4 feet high and that doesn't include the water, we both managed to edge our way under the bridge, faces only a foot above the water when we spotted a long run, now the silt we kicked up was dirtying the river so agreed to climb the steep banking and follow it, it eventually reached an industrial estate and was choked with weed. We decided to go upstream of where we started and see where the weed ended.

Stopping at where i lost the fish we decided to have a quick dab at it and i set up to my original set up. Just as Mark had stopped fishing his run a fish rose just downstream of him.  He cast and let his fly drift over again and again, nothing. I decided to have a pop at it, several casts and my line lay on a cow parsley, i flicked it off and was planning on fishing the weedy section when whoosh my klinkhammer shot under towards the reeds on our near side, i was already leaning over as we was on the bank.  I managed to get it out and it tried to swim across to the far side but i had got it on its side now on the surface. Managing to reach a couple of inches of net into the water i managed to slide it in.  Wooo we was chuffed. It had taken the nymph despite it having risen not long ago and it was a nice average trout for the Irwell.  We had seen a fish rise and caught it so we was equally chuffed. 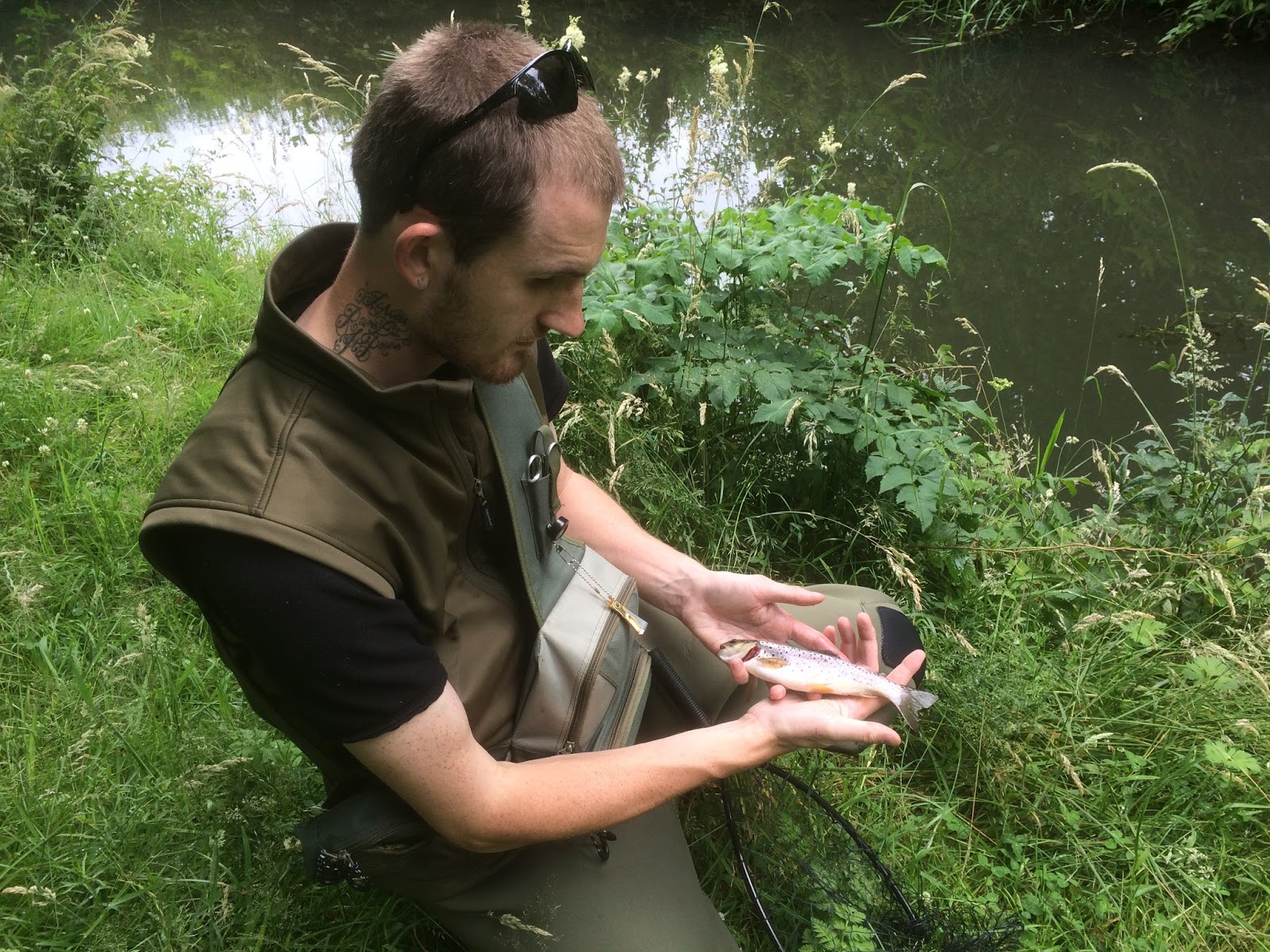 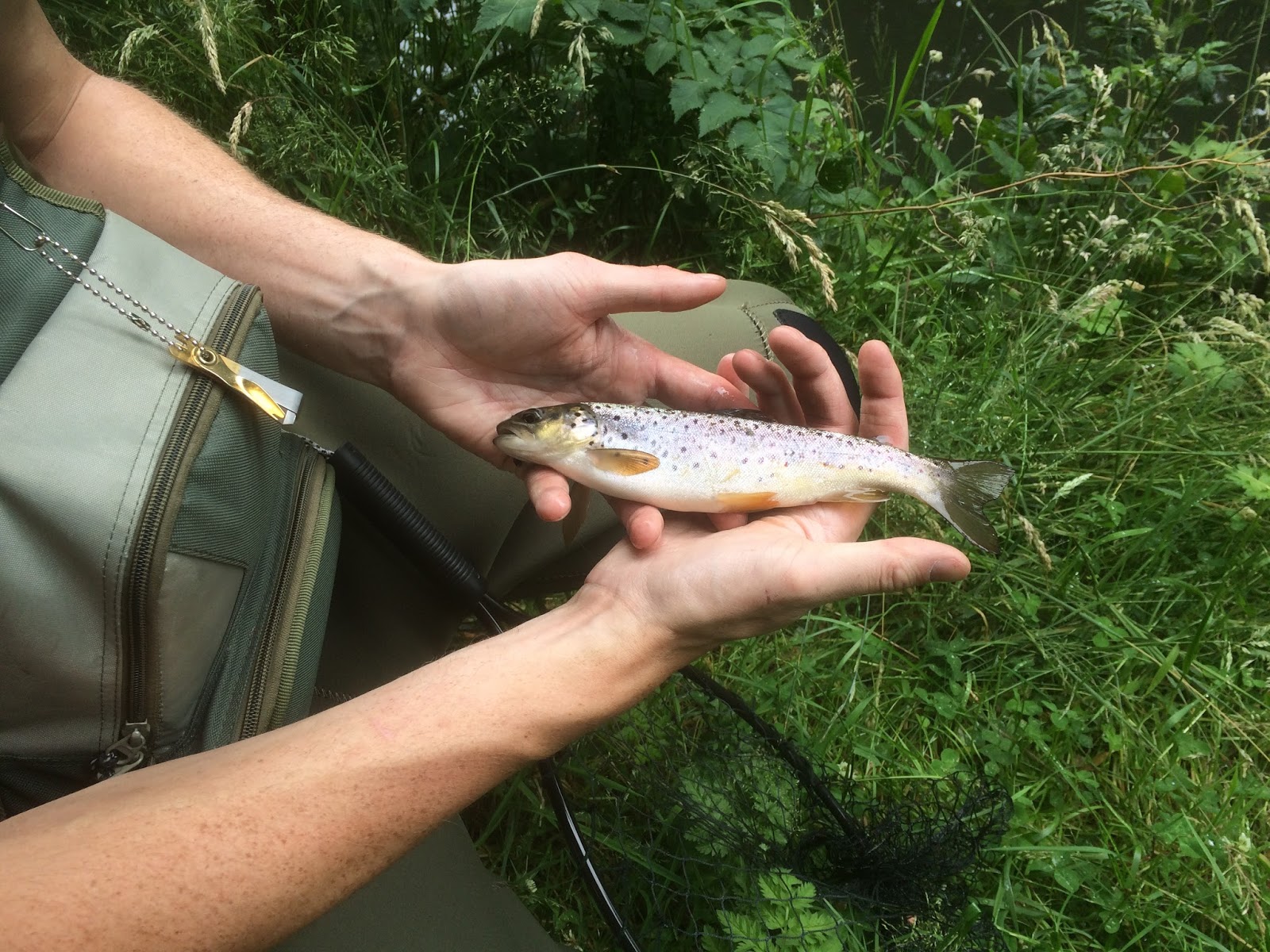 Continuing our search we found a couple deep runs with reeds either side and the odd weed bed. probably about 10-20m of river that was easily fishable but nothing again.  As time drew in and we knew we had done very little fishing to walking we headed back.  It wasn't a bad day, it was a very interesting recce of new water and we have planned our tactic for next time.  With barely any riffles and plenty of slow runs we have to approach it different and we will see if our new tactic works next time we are there.
Posted by David Bendle at 11:41