Fly Fishing - Trout on the dry in march!

Well, technically it is April 1st due to the leap year but considering that extra day puts us still in March i can still talk about this elusive dry fly fishing in March. Now last year i was down on the Irwell practising my casting, nowadays i know what i'm doing, i mean, i can hit a spot almost perfectly almost every cast, even of ly casting method isn't textbook it does work for me. I am trying to refine it but whenever a fish rises i don't piss about and just pop the fly where it's needed without thinking about my cast and that works somehow. It seems the more i think about my technique the more i look like i'm waving a huge wand above my head.

Anyway, back to the fishing, it is still the Easter holidays, it is moderatly warm and it was sunny. Now my beats of the Irwell are not the quietest at the best of times, i can go down at 6am and find someone dunking their head under the water, and those who have read this blog know that it happened! After i got there though it was fairly quiet, around 1pm. I watched the water chose a klink and dink with a stimulator acting as the dry and 2 nymphs below, i needed some weight to get down but also wanted the dry to be heavy enough to hold the weight and pull them through so they wouldn't snag every cast. It worked well and i removed a good dozen baby wipes but nothing was showing, really fishy spots produced nothing and i get into my head that something wrong. Fortunately, after an hour or so i hit into a small brown and landed him fairly quickly, the paths were getting busy but no one was playing near the water nor any dogs!

It was a slow day, it was another hour till my next hit but it jumped clean off as i struck, at least it was sort of working. Bare in mind i wasn't fishing the whole time, alot of water watching and bird watching, 2 kingfishers fand a lone goosander flew past. Still nothing rising, even despite a steady stream of olives across the river, it was a slow steady hatch, maybe 1 every minute or so (that i noticed) but i put this down to the proximity of the paths to the river that puts them off.

The Mrs rang saying she wanted to meet me so i told her where to meet me and i headed upstream, however upon getting there i found 2 people spinning, one sat on a fishing box? So i headed up to a quiet corner and nymphed around but nothing. Thinking i was being called home by the Mrs, hence why she was really coming, i started packing away. At this point i noticed a very small rise tucked into the bank on the far side, so i hastily rerigged my fly rod for a dry fly so i could say "5 more minutes" when the Mrs turned up. Just as i had finished there she was at the top of the hill with my daughter. So i helped them both down and began the dry game.

I started off with a deer hair caddis winged experiment, why? Well it was the smallest dry i had and the olives were pretty small, plus it was good to see how well it floated! However it continued to rise calmy and slowly ignoring it. So i decided to change fly, i actually considered rerigging completely, as in my haste prior i had put my reel on backwards thus the handle was on the opposite side, but i knee the Mrs wouldn't be tol happy with waiting. So i popped on some 6x hardys tippet and the adams i had tied earlier when i first started tying and cast just ahead of the rises.

It ignored it for 3 or 4 rises and i added about 4 inches infront each cast to try to give it longer to notice my fly. Then it was gone, a tiny sip off the top and i struck into it, it splashed and i alerted the Mrs who was convinced i was snagged on the bottom. After reassuring her i had a fish, within maybe 15 seconds it was swimming slowly on the surface, getting within 2 feet of my net reach (which i didn't attempt) i told myself "don't rush it" and within a second it shot off back into the depths of the pool. I was stripping line as i couldn't reel in, i could of swapped hands and wound the reel with my right hand but it wasn't a risk worth taking. I kept control of the fish keeping it in the pool, it only ever stripped line out to go down to the bottom rather than racing off up or downstream. This pool had a fine gravelly bottom so probably held very little cover for it to go behind, plus the fact that when i did land it, it had old v-shaped scars from birds showed that this tactic probably saved it's life when it was smaller.

Withing 3 minutes i had tempted it to my net and was presented with a new personal best and a lovely looking specimen even with the scars. It had been feeding well and was a very healthy fat trout, sipping flies all day will get you like that. It was a brilliant moment as my daughter was there, a nee personal best caught on my own tied flies, and hopefully it would shy off for the rest of the day and avoid being caught by a spinner.  After a safe release i told the Mrs we should go and end the day on a high, and as i made my way out of the woods, 2 more anglers with spinning rods arrived.

It was a job well done and a great start to the year, hopefully there will be more fish to aim dries at and the nymphing game hots up! 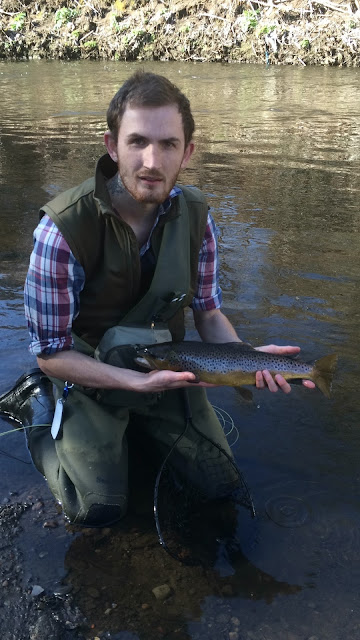 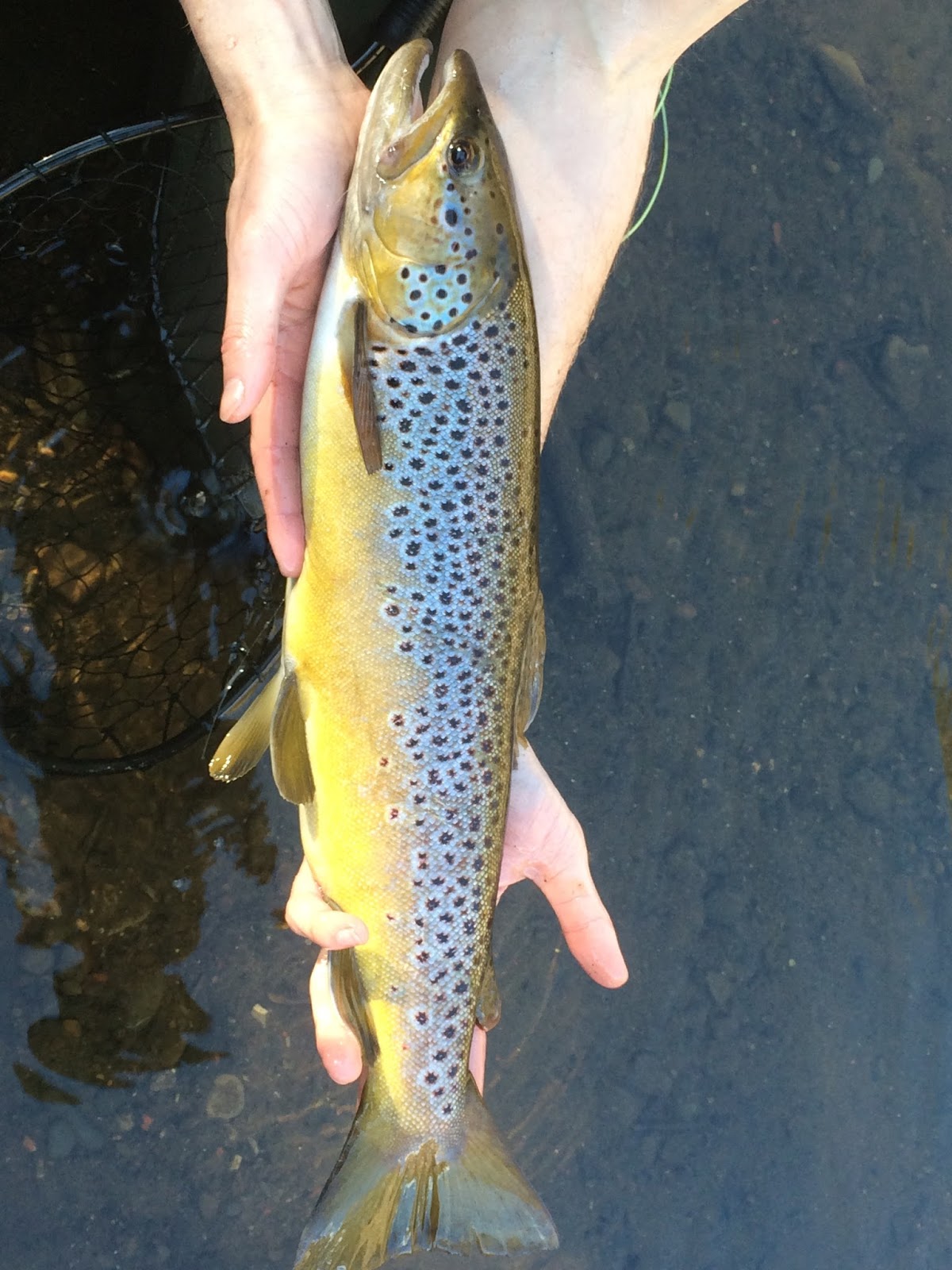