Today was a pretty special day. Since seeing that first trout rise as i walked past the river, to researching the River Irwell and Fly Fishing techniques to finding Arthur Hamer's blog and learning so much about the local river, i finally met the man himself.  Now I'd say from todays meeting that Arthur was a modest guy but in my eyes he is a prolific dry fly fisherman, which is why i was hoping he would be able to show me how to pull these damned trout out of this stretch of river. But it never is simple fishing.

We started fishing upstream of a rise or two and after catching the knotweed weed and hogweed, had to leave a fly in the top of one hogweed plant, we swapped sides due to us being opposite handed. Made things easier but nothing was interested. So off we trotted up to the first riffle section, again nothing, so as i always do at this point with no takes, i changed from the depth charge to a czech nymph and an olive.

We worked up the next slow section but to no avail and it was ever so quiet, barely a fly around either.  Just as i reached the start of the riffle water i got a hit and a nice little trout on the olive. 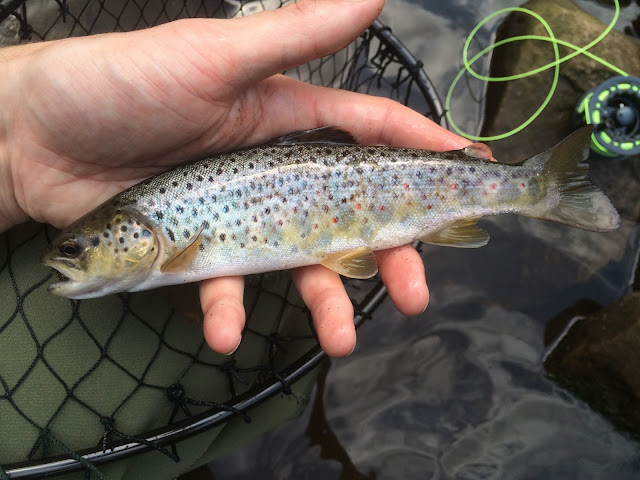 Still no luck for Arthur but we had a little chat and as i cast while we talked i had another take, i saw it run towards the riffle before it pinged off the hook and was away.  A small trout rose up ahead so Arthur went in search of it while i worked the pools and the riffles and as we both worked our way upstream after Arthur found another trout rising i bagged another trout. This one was a funny little fish as it took it in a 5m stretch of water between 2 large riffles and instantly sat under a rock when it was hooked, i waded up so my rod could extend past the rock and the little sod was off darting round my feet and was a tricky little fellow to net. 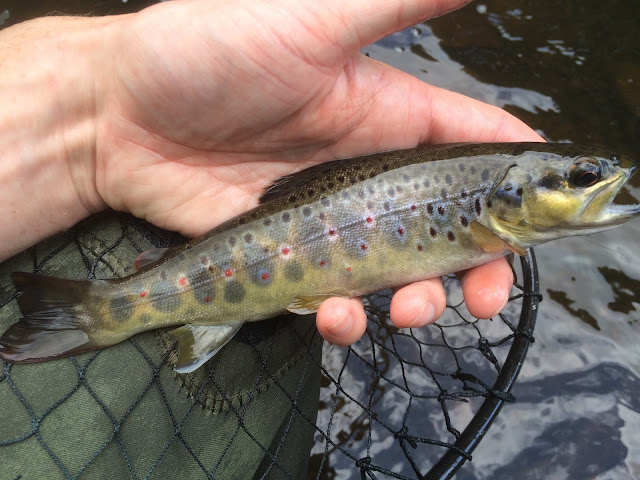 With the fish that Arthur was after now hiding we headed up to a stretch that is prolific in rises and as we got there a fish was rising which i left Arthur to chase. I nymphed upstream and lost a tiny trout and had a big hit but nothing more so i switched to dry and watched Arthur after this 1 trout.  4 times it jumped where his fly had been cast and continued on its crusade to taunt Arthur, who offered me a crack at it, several drifted flies later it had a slight pull on the fly but nothing more and it started rising further downstream.  I headed up with Arthur not far behind and had 2 good rises for the Klinkhammer but they failed to grab the hook and we was left with nothing on the dry fly.

With one final stretch to fish and a trout rising in the slow water, i switched back to the previous nymphs i had been using and fished the riffle water as Arthur went in search of the rising trout, i bagged another trout and that was to be the last of the day. 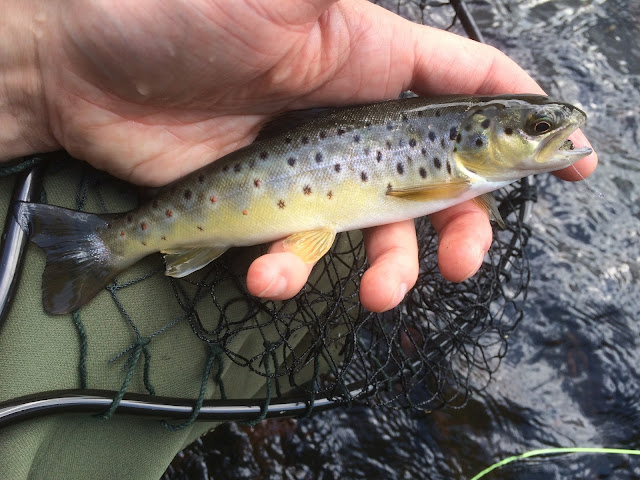 I felt for Arthur as he had taught me so much but i knew this was a difficult stretch on the dry, they are very very picky and stealthy.  With the good deeds we had done all day including tire removal and the removal of over 10metres of 15lb+ line we wasn't repaid and i hope Arthur isn't put off from fishing with me again. Maybe with his Tenkara stick with the nymph next time

Oh and i forgot to mention we found a bright orange inflated lilo in the river, offered the chance to float back down river but instead we binned it to avoid further pollution in the river