A hot summers day with the mercury reaching 30' according to the weather app, kitted up in chest waders, fly jacket and a shirt i felt like i was on some sweat fitness program. Regardless i was keen and made my way down to the river. As i arrived i heard a crash and a splash, confused i looked down the embankment to see a roe deer clambering in the water, luckily it found its footing in the shallows and hurried ungracefully over the rocks into the knotweed downstream. I had ran down the hill as this happened as i thought it was going to be some animal rescue moment, but fortunatly i wasn't needed and i had spotted my first wild deer. strange to see one at midday in hot summer sun surely?

I reached my first run with the intention of testing my new tactics on losing less fish, which basically was let them swim for a bit and avoid getting them to the surface. I felt that alot of the fish were lost during the jumping so i was trying to avoid that as much as possible. I cast into the tail water and was in almost instantly, netted and released i was happy that things had started off quickly. Reaching the riffles i lost a trout but then somehow managed a miracle catch, a damned stone loach.  The first trout had taken the czech nymph but the loach had taken the  shiny black and white ribbed fly, i wasn't using much weight today.

The pool were i have had big trout lost and my biggest trout caught brought nothing though i did lose a fish on a slow stretch before it which had never produced a fish before. just above the pool in a very rocky section were i've had a couple before i pulled out 3 and lost a very small one. all on the shiny black and white ribbed which in fact caught the rest of the fish today.  i saw a trout in the shallows about 20 feet ahead, average size but i was happy to see i was adapting to river fishing noticing trout lay on the bottom, 2 casts it ignored the flies and the 3rd it spooked.

A long wait between my next hit, nothing in the shaded areas strangely, maybe as i had dark flies on or they had moved to warmer waters in the river. my final section i reached were i have had 27 trout so far in had a foreign couple spinning in it and a family with 3 kids around the age of 6.  I had a chat to the guy to see if i was ok fishing with him spinning and he said he was heading down river soon anyway.

Second cast i had a trout on but the families dog raced in the water and tried to grab it, giving it line to swim away it got off the hook and i gave a threatening look to the owner. I could cope with sharing the river as long as they didn't interfere or endanger the fish.  I lost a  few trout, played them for around a minute the 'bigger' ones but all lost when they flopped around as i pulled them towards the net, a couple slipped off while i let them run under water, a small trout swam through my net before i could take it's picture (around 4 inchs) and i managed to land 6 more trout, despite the families kids showering the river with stones.

A few people came down to this stretch as well and a young group of college aged lads and girls had a chat they were respectful saying they were going to move as i was fishing but i said they could stay as they were doing no harm unlike the others.  Shows there is a difference in people, those who have respect and those who don't. i enjoyed my fishing, difficult conditions and difficult people but could of had more had it been quieter but the river isn't private i'm afraid. 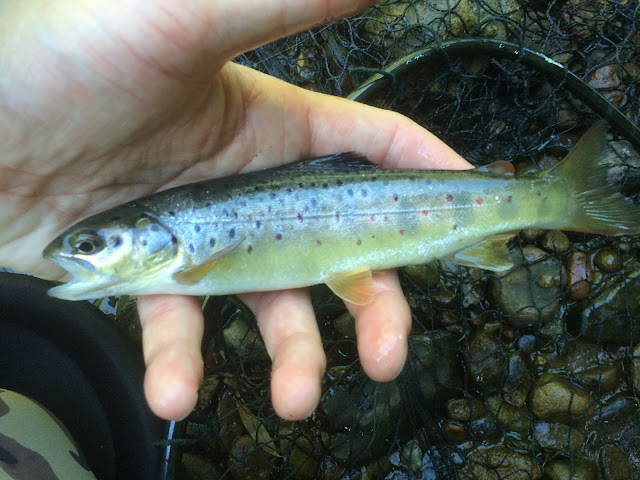 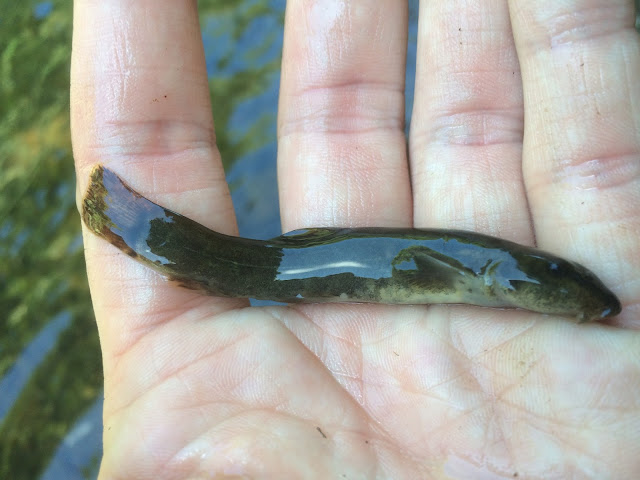 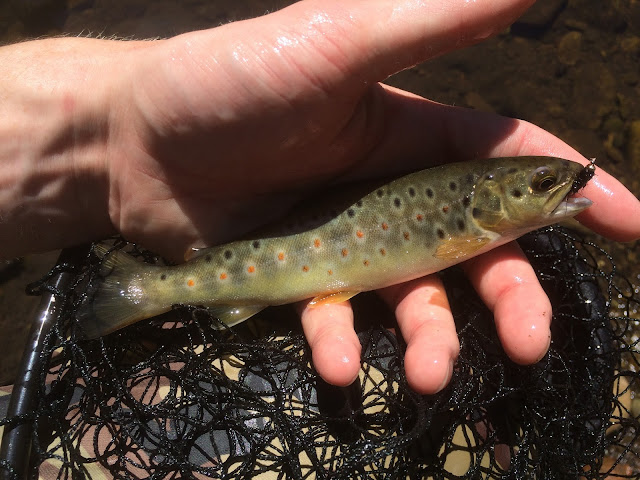 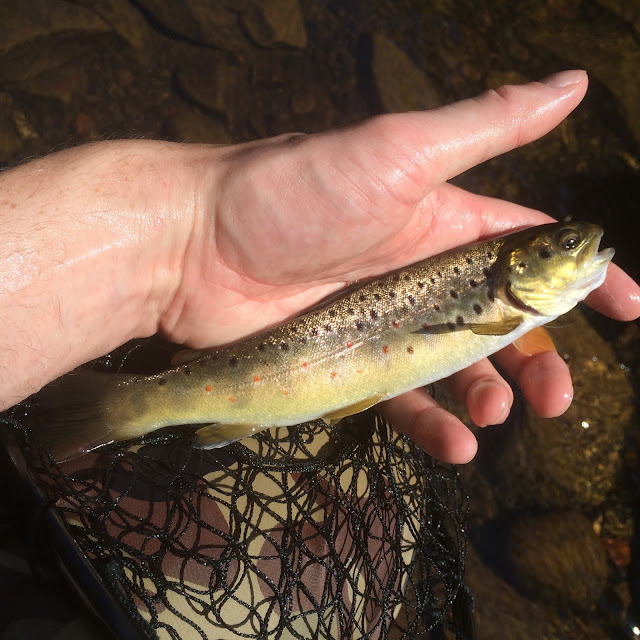 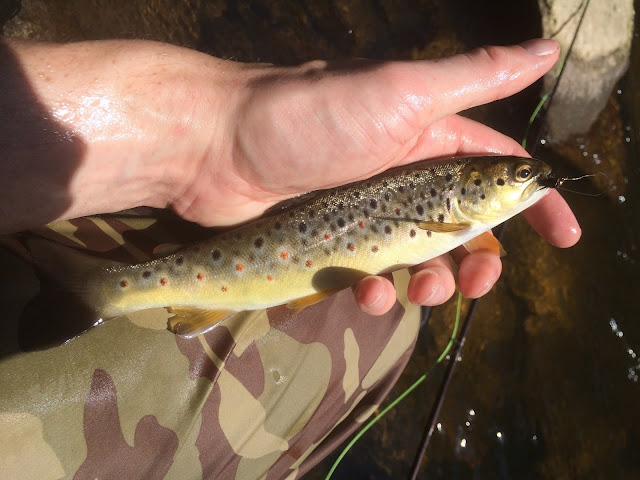 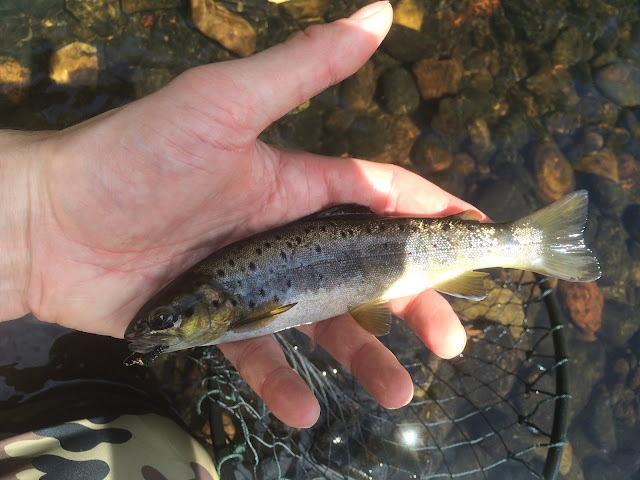 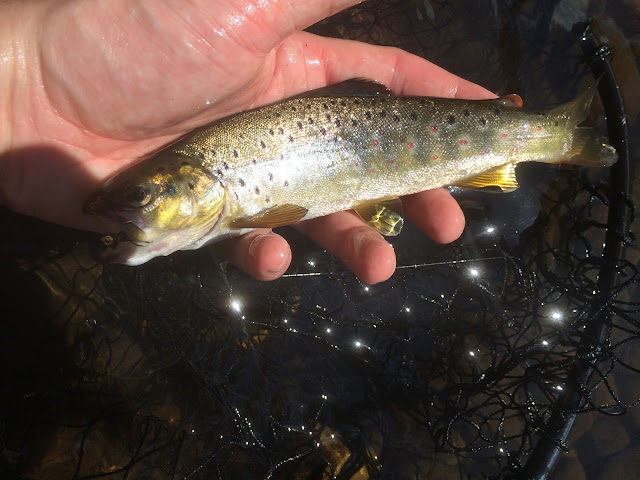 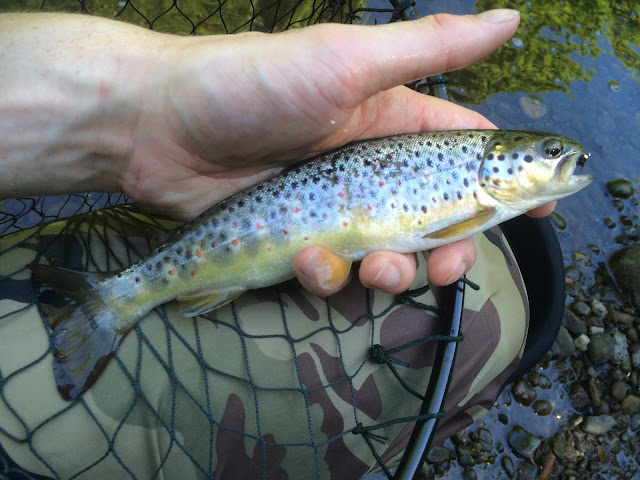 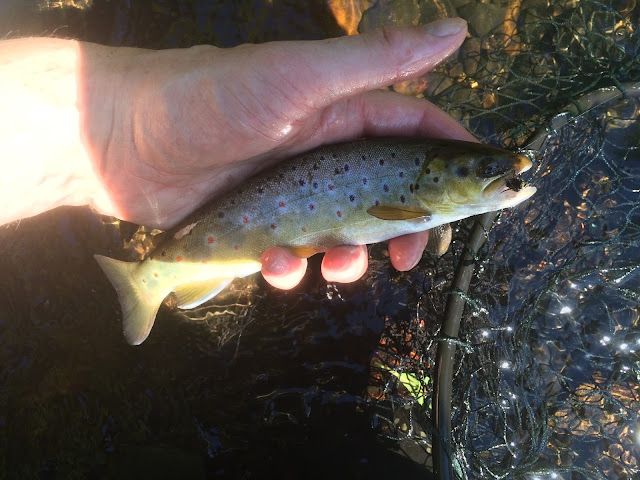 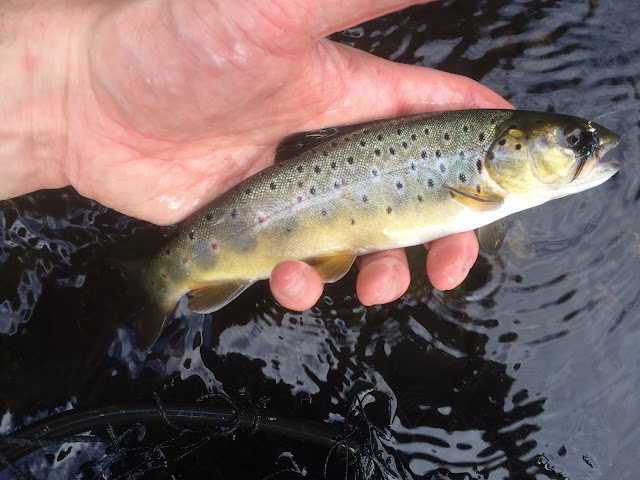