Interesting day fishing, sun was high on my back with a 11am start. Set the camera to film and got a good hit on my 3rd cast running along a back eddy, a short fight with a good bend in the rod despite the shallow water, without no water to run in i readied the net but he had one trick left up his stream and jumped, and jumped the hook unfortunately.

Caught a small one here soon after but nothing else showing. Moved further upstream and the next 100 or so metres was really quiet no hits, considering i'd caught 5 here previously with over a dozen hits. did a single cast in an ankle deep 'pool' between two shallow riffles and caught another small trout. surprised myself but shows how the fish change locations so often.

Caught another small trout in the next pool not much further up. I had changed flies with the few bites several times at this point. From an olive i put on a hares ear. as the water was crystal clear except in the deep sections (around 4-5 feet visibility) to a black nymph. all caught fish but non prolifically. i was catching 1 fish for every 1 lost.

Walked the distance to the next section, the gap between is inaccessible from the banks and unsafe to wade, when you get to around 4 feet the ground becomes silty and you sink, with alot of air bubbles being released. meaning there could be potential sink holes. fished the bend and didn't catch anything till i reached, again, the really shallow runs and managed 2, lost a bigger one again to a jump and a couple of small ones. believe my striking is the cause due to the low trees (i have to cast sideways to go under the tree as it hangs around 3 feet above the water - is the case for most of the section)

Decided, at this point, to talk half hour to a much wider section, as the water level was down here, i expected it to be like when i first fished it when i was learning to cast. Reaching the section i was overwhelmed by hogweed. Standing on the stem bottoms and snapping them so i could safely pass i went down the hill. realising i'd gone down a hill with no true footholds i knew it was to risky to go back up this way, and the only way back up i knew was about an hours walk through the river. The water on the wider section was a torrent. i didn't understand, the EA app said this section was at it's lowest but it was higher than in April. Something had changed to make this happen.

i could wade to about knee height before the force of the water was actually moving me slowly backwards along the bottom, the constant feel of being lifted pushing against me, i fished as many sections as i could but nothing, no movement anywhere. i reached the spot where i hooked my first trout, it was accessable, strangely in a section around 30m wide, 2/3 was safely wadable and i reached the small outcrop that overlooked the pool i hooked that elusive trout. nothing. dejected i headed back, having to find a tree branch to act as a guide as i waded the river as it was unchartered territory and the bank was hogweed central. luckily it was slow in this section as it was above my waist.

Then i ran into an old foe. This damned wire. Where was it coming from, 3 spots i've encountered it, thankfully this wasn't buried so i removed it completely from the river. but someone, somewhere, really fucked up when they put it in the river. even though this bit was small in comparison to the 50m+ wire strands in my usual spot it is a killer. if myself or another fisherman or even someone messing in the river got ensnared on one of these, they would drown. I know i would, i couldn't put my head under to untangle my foot from a wire mess entangled in rocks with the force of the Irwell beating down on me, i only found this as my fly snagged it and i made sure to get it out.

Used my walking branch to beat the crap out of the hogweed on my escape route and decided to have 5 minutes on the first spot i fished to see if i could catch the fish i lost. caught my 6th here but it was just a small one. removed a wardrobe panel from the riffles that had been there since well before i started fly fishing, more natural movement over the rocks now. 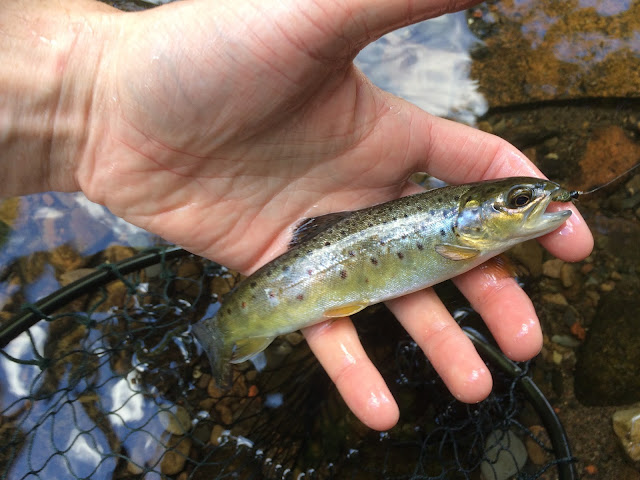 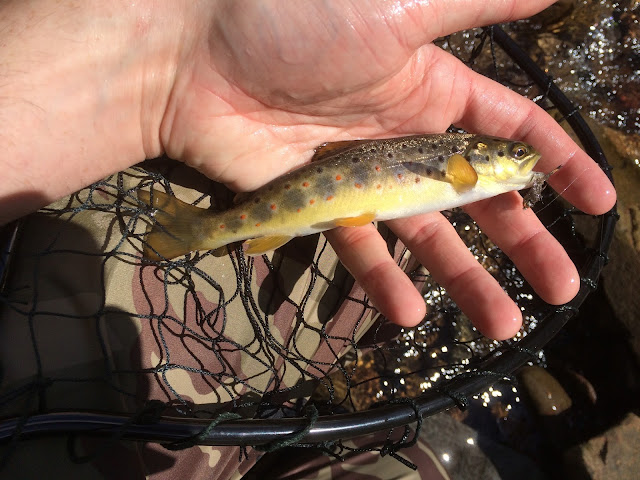 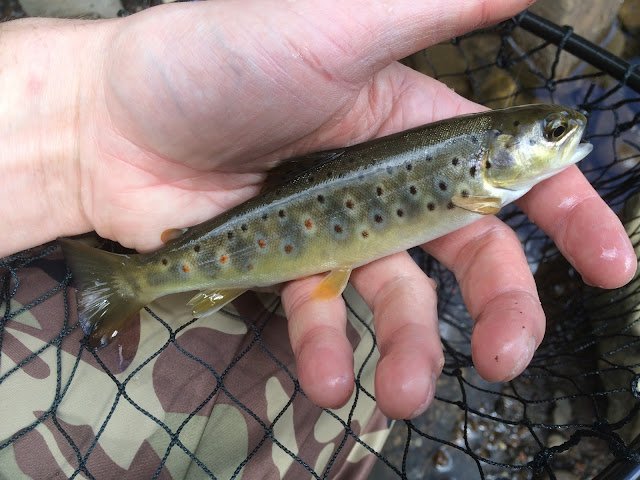 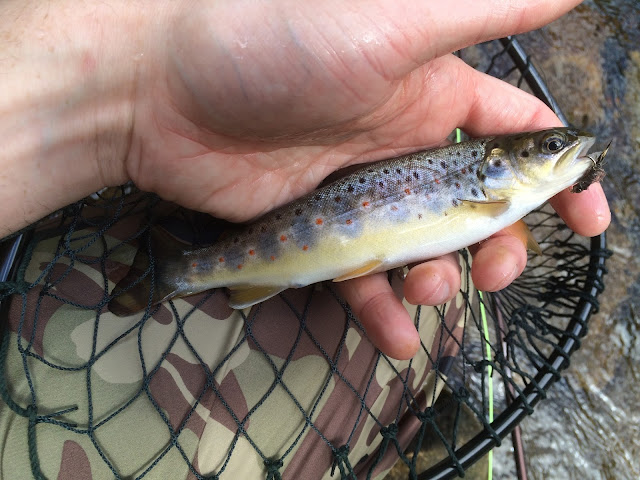 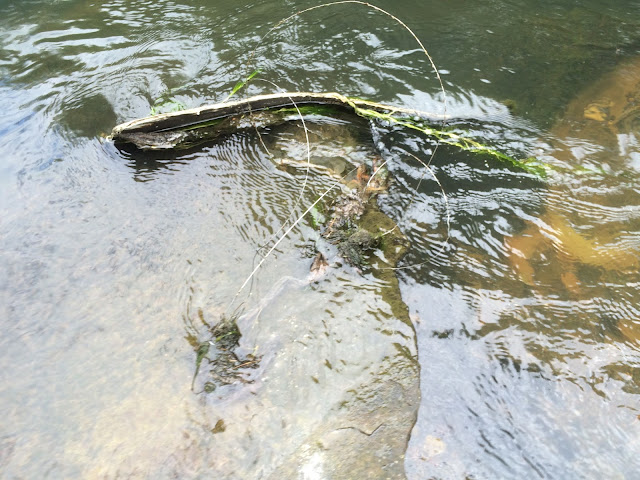 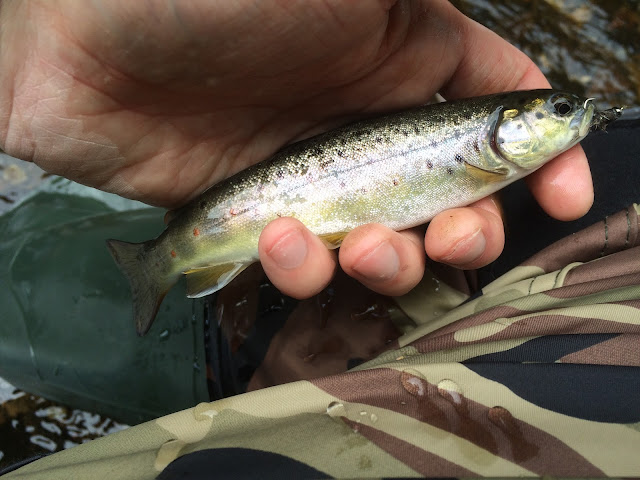 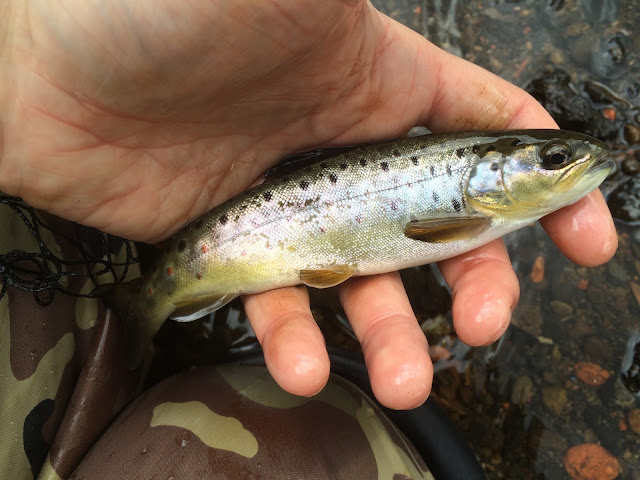