Mid-morning and the rod was out.  River was still crystal clear and was at a point were it probably couldn't get any lower.   Jumping in my usual spot i started with a lone hares ear to test, clear water makes me put dull nymphs on, but nothing. checking to see if it was duo day (were the fish only take a duo despite the same fly in use) i put on a gold head olive on point.  Nothing...

Now earlier on Monday i had ordered several flies and they had come in the morning, i thought hell i'd give one a bash, thus the 'depth charge' was hooked up with the olive on point. making my way up to the next riffle, nothing, hell this depth charge really did get the bottom though in these faster waters, weed, weed, snag, weed, so many caddis and cased caddis in the weed i pulled off the hook.

reaching the still pool that the riffle ran either side of i cast just before it and allowed it to run in, my 2nd cast hit the over hanging tree and snagged, i'm quite silent at wading i think, even shoals of minnows at my feet tend not to scare when i move. so i unsnagged my fly (about 3 feet from the pool) and went back and cast again. I felt the line twitch and i struck. Well holy mother of joseph, i'd hooked a swimming brick. I knew it was a bigger trout that the ones i'd been catching of late but i hadn't seen it yet. the shadows of the over hanging trees prevented this until it ran me downstream and i managed to turn it round.  The dark olive colored back sent my heart racing as my brain unconsciously measured it.  It was a good trout, then my brain told me about the past failures on the duo, all those hooks coming out, i just had to keep the line taught, it dove and raced around, at one point it stopped moving, i did too, scared it was under a rock or snag or even a tree root. It was a little lost i think as it was fighting strong and swimming deep but in circles around the pool, i gained some line and it leaped in desperation, seeing the thickness of it's head as it leapt out made me realise how good it was, the facial change trout change as they get bigger had started on this. that hooked jaw look. after one more jump i had won, lying flat on it's side as it came into the net. like a little kid i practically skipped out of the river to the side in my attempt to capture the trouts size in a picture. (15 inches)

Tired from the battle he was patient with the pictures but soon bolted off when i released him.  I moved upstream and caught a nice trout, bigger than the average ones of late. fought quite well on top of the 'waterfall' seemed it didnt want to go over the edge so stayed deep in the big rocks. 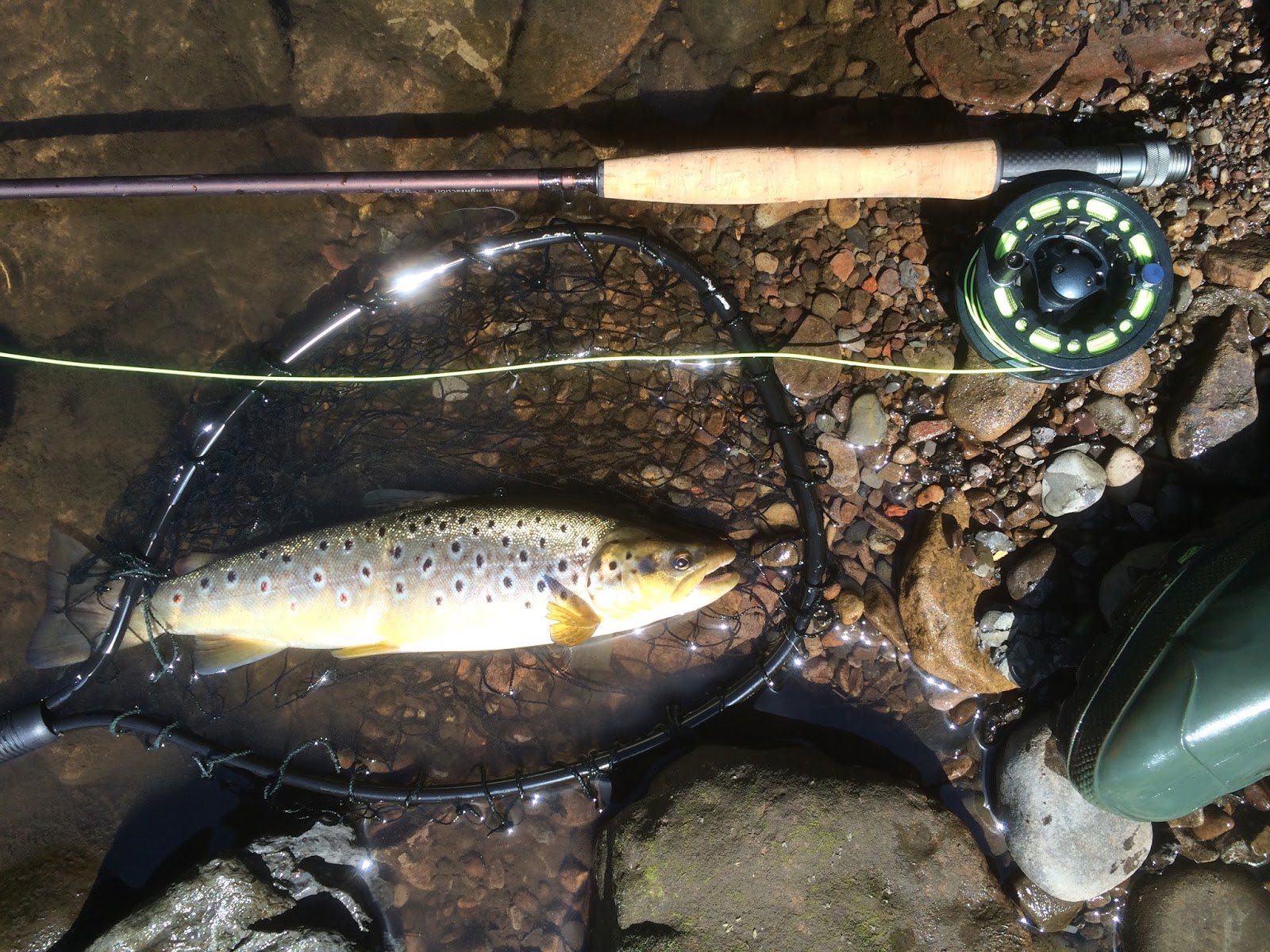 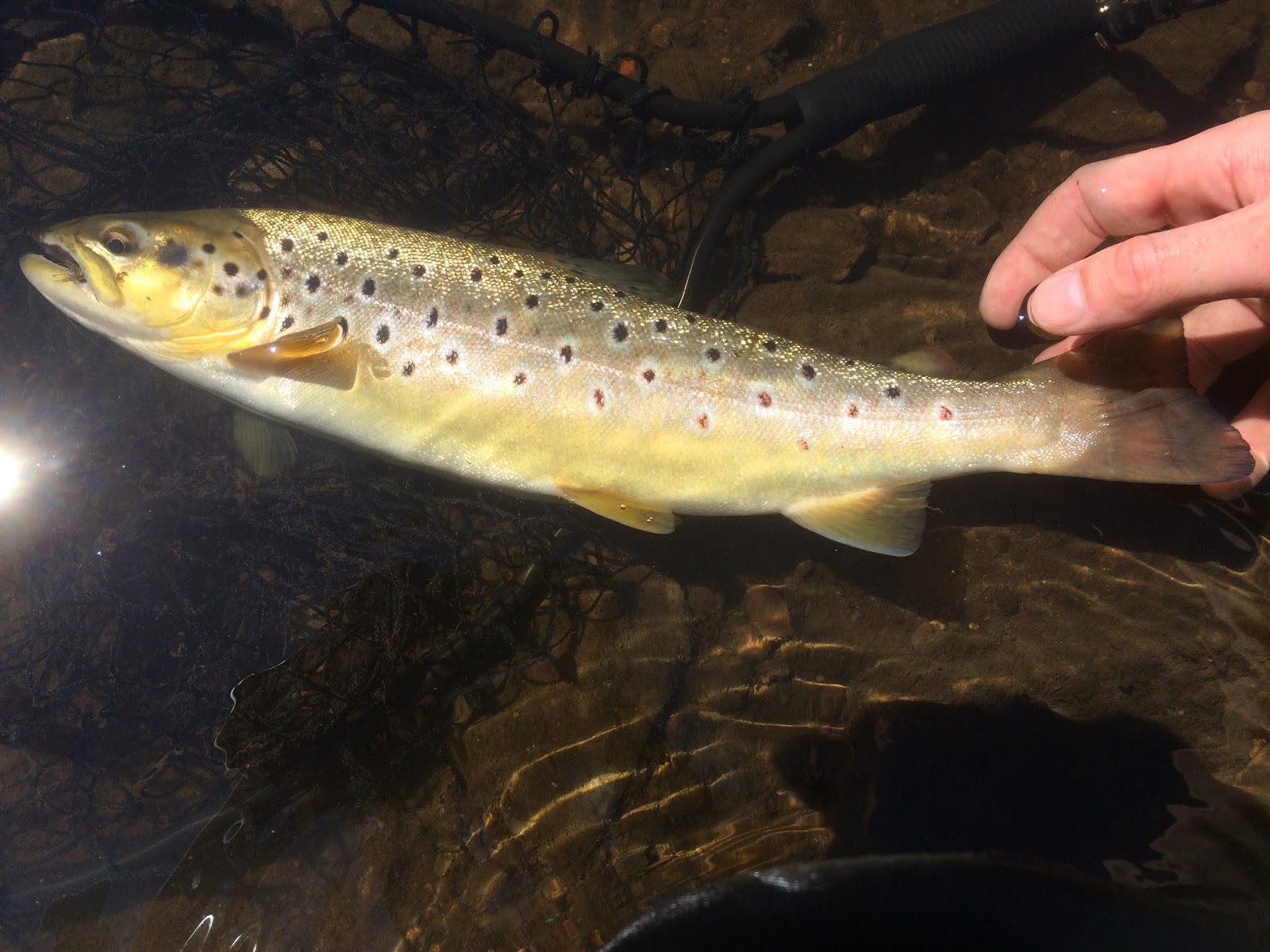 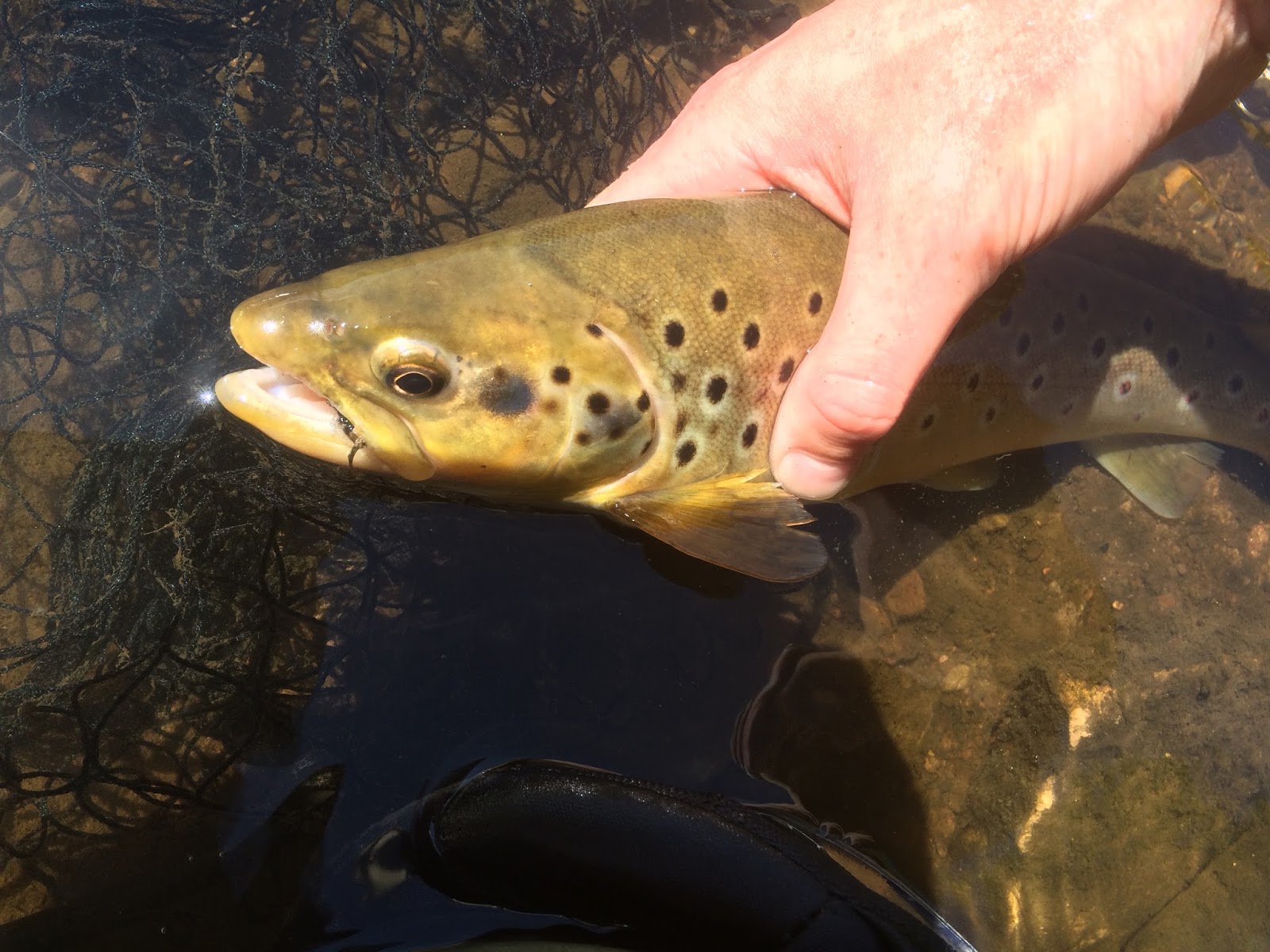 Not much else so reach a bend with a nice back eddy pool, somehow i missed the huge snag that had been washed down in the heavy rain. a large wooden rectangled about 3 metres long 2 metres wide with wrought iron trim. guess who snagged it. i waded forward but as the water reach under my jacket i felt myself start to lift off the bottom, bit scary when you can't swim so i quickly jacked that idea in.  But i couldn't lose this damned fly! so i waded upstream to a shallow section, i was on backing at this point and then hugged the bank all the way down.  I tried to pull the board out, as a corner stuck out of the water, nothing. using a stick i plummed the depth, couldn't feel the bottom so over 6 foot deep.  I then used the stick to push my line and tadaaa i unsnagged myself!

i moved upstream to a section under trees on both sides, never caught here before but i quickly hooked and lost a nice trout similar to the one previously, just as it came to the net. Damned duo! Another cast seen me land a small trout and through this section i had 5 more takes which quickly came off.

Heading upstream i was greated by a woman with a dog in the water, not phased i cast into another eddy pool and caught another nice trout. She soon buggered off, maybe initially hanging around for the laugh as 'the river is dead' and realising i was there for serious business. the opposite end of the pool gave me another trout and the smallest by far trout i'd caught in the shallow riffles.

i moved upstream as i decided to go and caught 2 minnows, which summed up the day of big to small but i could of easily gone home happy after the first fish.  All of them caught on the depth charge. 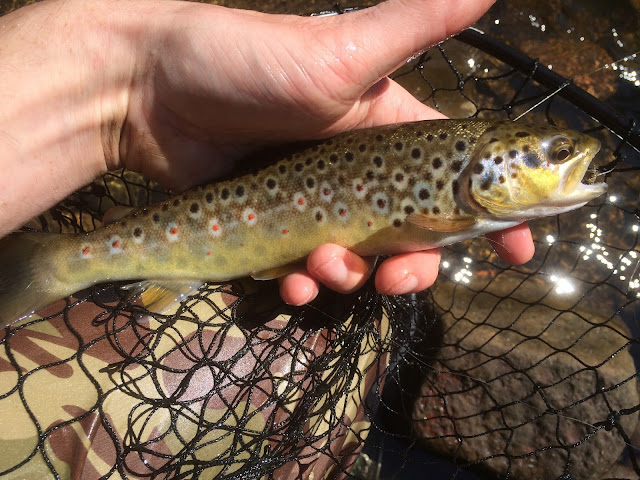 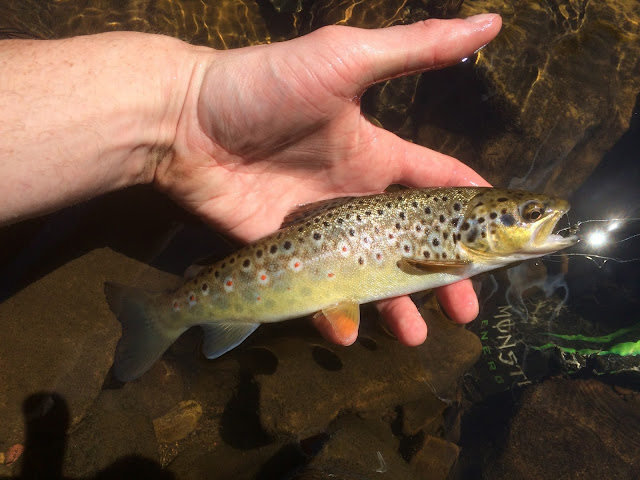 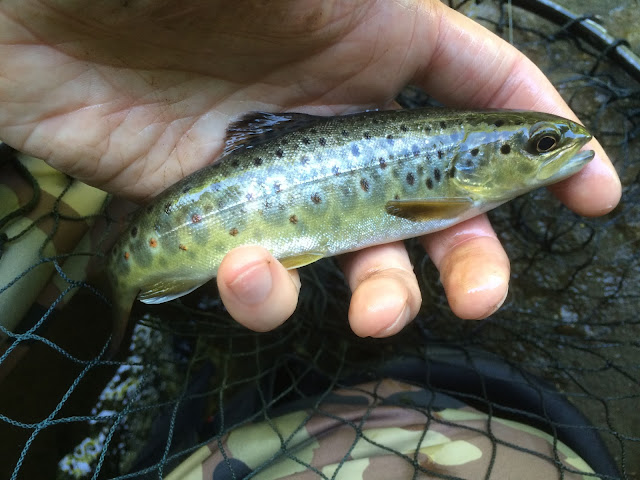 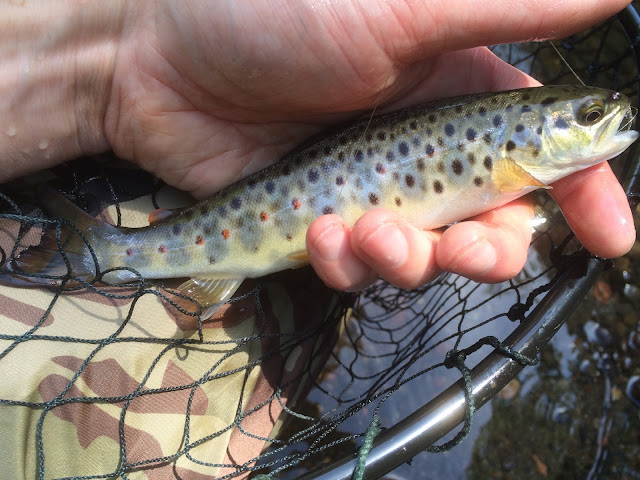 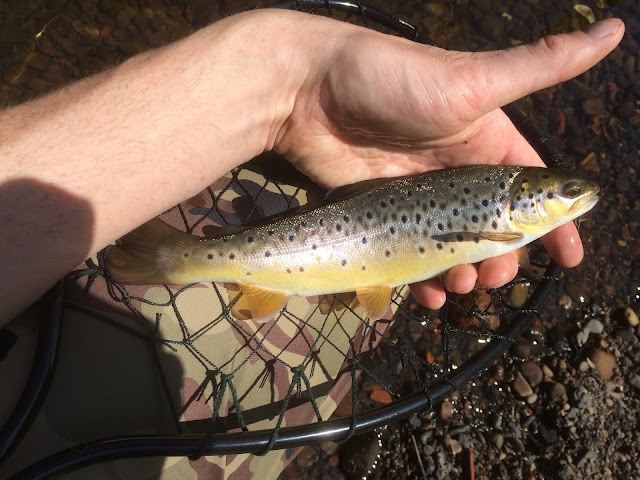 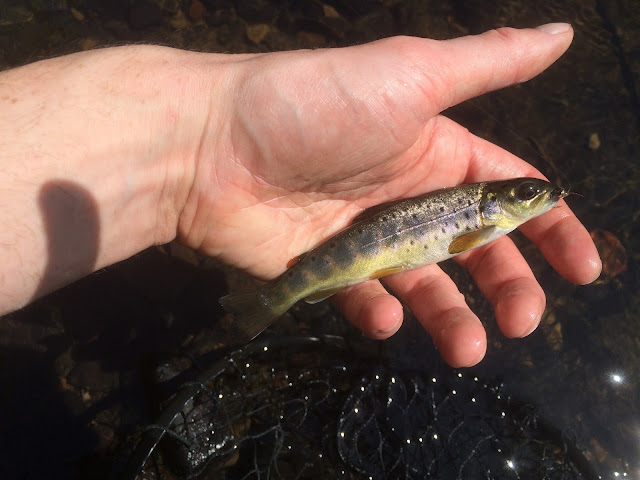 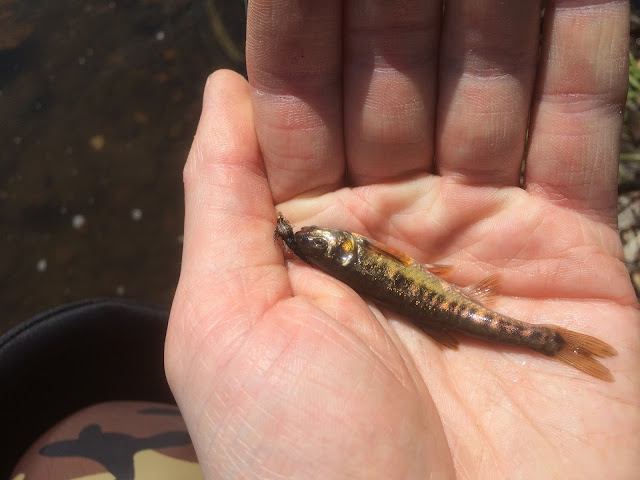