The night previous i stopped being lazy. I unloaded my reel of the line that came pre-loaded and put on a Wychwood presentation line which came part package with my rod. The reel was loaded smooth, no kinks or bumps like previous and with a leader loop on (unglued) i was looking forward to the next days fishing.

Heading down to the river on a cloudy overcast day was a treat. I had waited for Wednesday as the school kids were supposed to be back and i was fortunate that the weather was favorable too. My polaroids had arrived that morning so i was fully ready.  Wasn't much was showing in the river only in the inaccessible sections, too deep to get too and too much hogweed on the banks. I seen a couple of rises near the kingfisher tree so headed straight up there.

A few casts in this pool and the rises stopped and moved to the head of the pool, i was distracted by a squirrel running across the tree next to me and gazed away for a second, only to here a plop and realise i'd missed a hit.  A few more rises but they weren't interested now so i walked off upstream to scout out fish.

I was on the dry again, with the water being low and weedy i've not nymphed as much as i usually would. At the hill top run i saw 2 rises one big one under the tree where i pulled the crazy trout out and a smaller one downstream. a dozen or so casts at the big rise with nothing showing not even another rise i turned my attention to the smaller rise. it was still happily coming up every 10 seconds. it took 5 minutes of casting and watching it rise every time my fly went past as it took it's prey from the surface, eventually it chose mine and i soon had the little guy in the net. 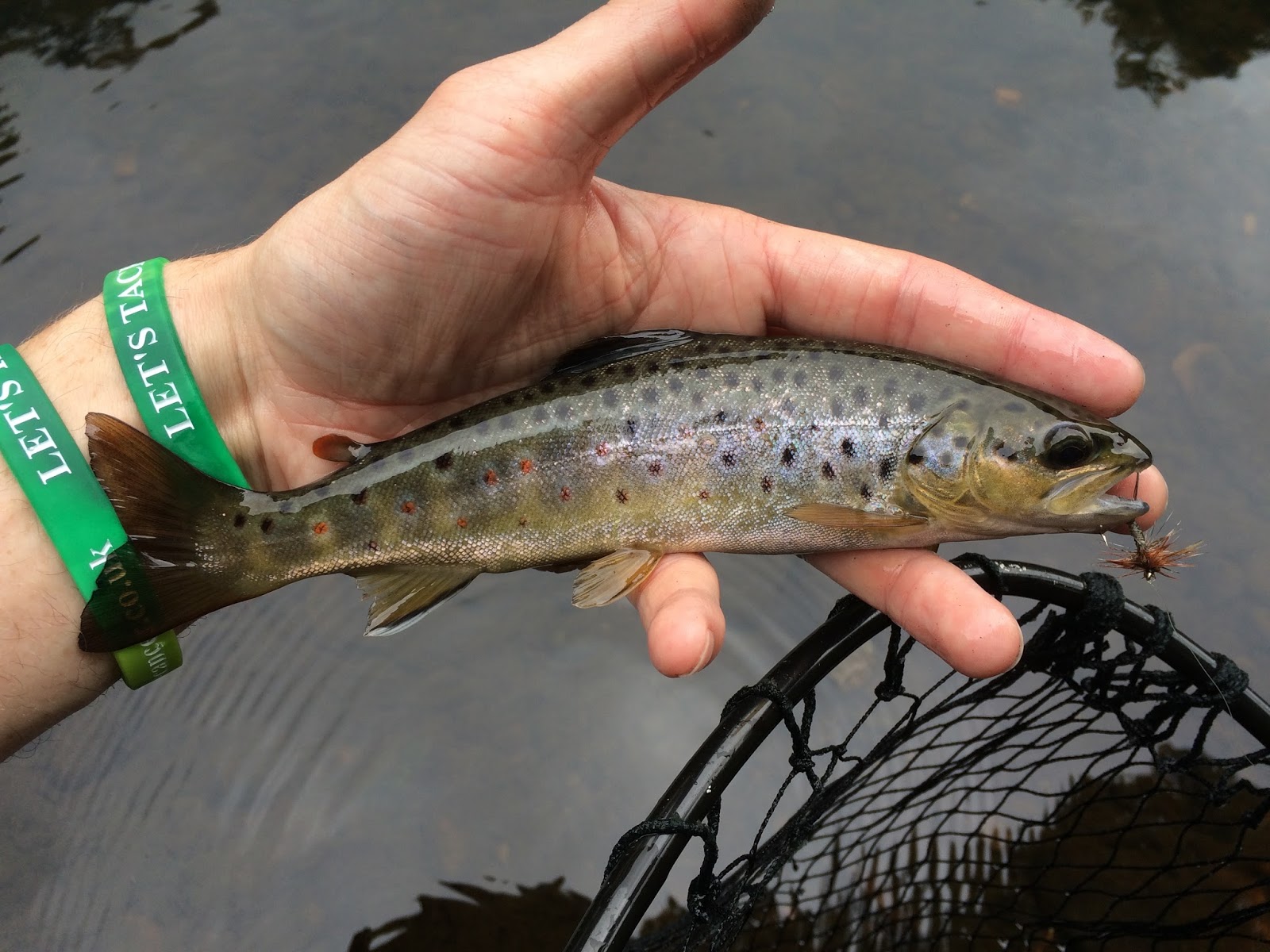 I decided to chance the riffles and tied a nymph under my dry and i was soon in but as it reached the shallower edge of the riffles it leapt out of the water and clean off the hook. Dammit.

I sat and waited after fishing the riffles but the rises had stopped so i headed off further upstream. It was strangely unsettling, barely any rises around but now back on just a dry i was getting them to come up and have a look now. Miss, miss, miss. Even with them less than 15 feet away. They were very cautious despite there smash and grab take. I hooked into a bigger trout that steam powered its way within inches of my right leg then turned back round and swam straight back past me into a weed bed and the hook slipped out. Couple of obscenities were said. I reached another shallow run and as my 9 foot leader had frazzled a little i cut it in half and stuck 2 nymphs on for the riffle before i went back on the dry.

The riffles were very weedy and i was removing it every cast almost but i soon hit a fish. At first it thought it was a minnow but it turned out to be my smallest trout ever! Good to see them this small hitting flies hard, shows they have a good future. 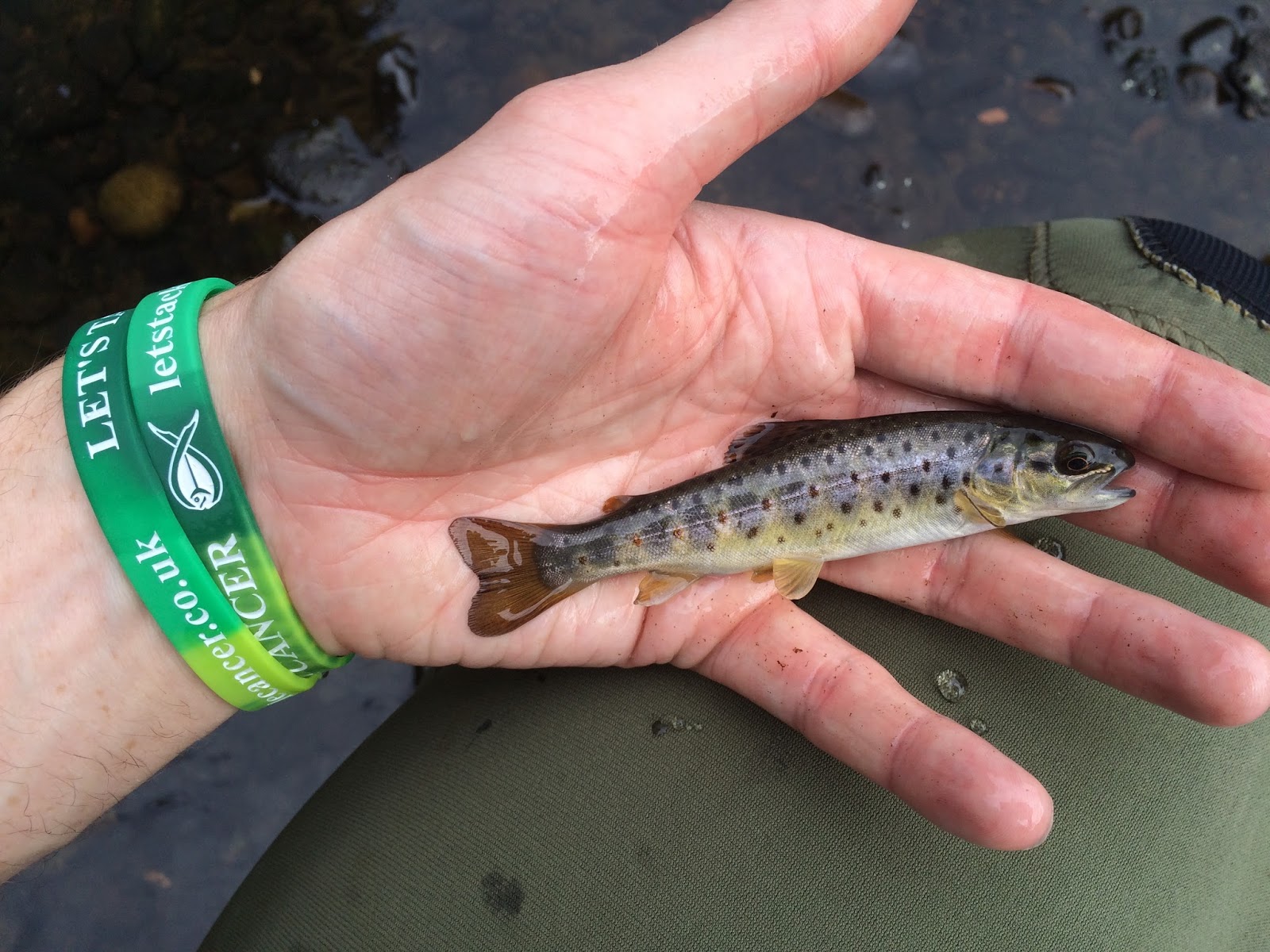 The slower water ahead was full of rises, big and small and it was frustrating how many i missed! (what was going on) i was reacting so quick but it seemed they were even quicker. I hit into a couple of bigger fish that held on for a few seconds and my fly was getting ripped up. I saw a trout silhouette about 3-4lb sat in the shallows. Casting to it it rose up, stopped, its back breaking the surface, and shot back down. Frustrating! Coating leader sink on to my leader every dozen or so casts, sometimes it didn't even sink then. With my fly on it's last legs from all the snapping teeth i hooked into another trout, again it powered straight towards me, with the amount of line out from the distance i had cast i had to wrap the line in my hand to stop it tangling, and then pull the fish towards me holding the line. I will have to think more carefully about trout that swim straight at you before i lose a big one this way.   The fly was totally destroyed after this and i decided to call it a day.

With so many missed opportunities i was kind of disappointing as i could of had a hell of a lot more and bigger sizes but it gives me things to think about. especially my leader sink. 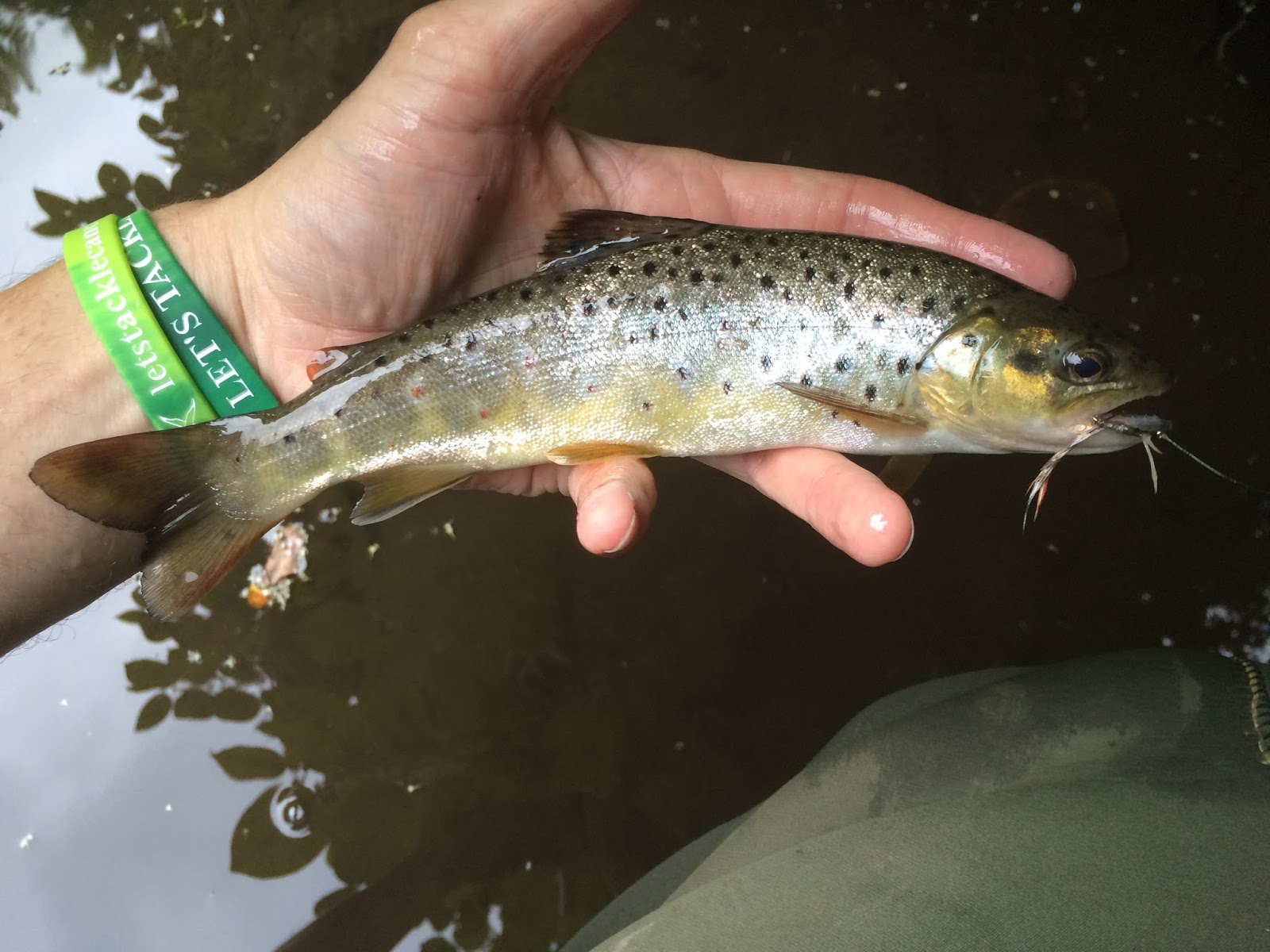