With light rain all day the previous day and a short shower at 1am the river level chart showed good results. A small rise in depth and a quick return to summer level within 2 hours. With the sun shining but large ominous black clouds in the distance i was hopeful the cloud cover would head over to blot out the sun. Not only does it give more favourable condition on the water but it keeps more people away from the river. Upon reaching the river however, i noticed it was up by about half a foot as the shallows were completely covered and without my polaroids (which still haven't come John Norris) i was quite apprehensive about getting in the water. Not only did i have no polaroids but the water visibility was extremely poor but nonetheless i waded across to the gravel bank and set up watching the water.

Several kingfishers were hanging around, flying past, when i noticed a couple of strange rises. There was no 'food lanes' or bubbles nor was there anything on the water. There wasn't really anything flying around but there was these half rises were in my head, i thought, they were just sitting under the surface waiting. So on went the dry fly, i cast and cast steadily getting closer to the rises with each cast. It was 8 minutes on the camera clock when the first take happened. A soft take off the top but a good take nonetheless. With some minor acrobatics it was soon in the net and i tried out my cameras waterproof ability. The clarity of the water is obvious in the video (see bottom). 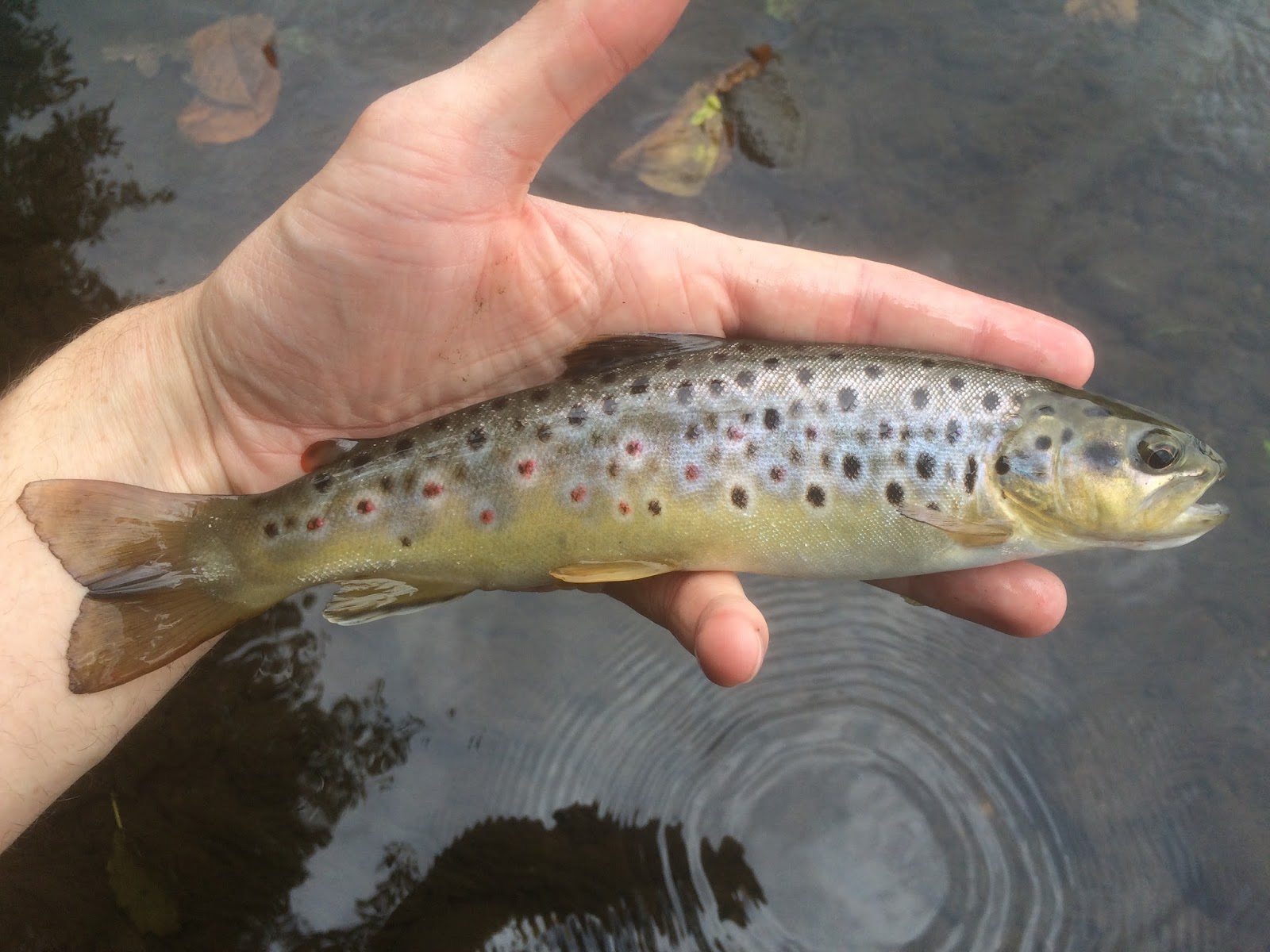 I moved up to where i seen the kingfishers sat as there had been some rises there previously. Casting 30 or so feet to a half submerged tree i was surprised to not get a take, the cast deserved at least a look. I have been happy with my casting of late and now i'm catching on the dry (same dry fly again i should mention) Just then i recieved a call from Mark who asked if i wanted to check out a section of river he'd spotted. So off i went to meet him.

After a brief trip in the car we came out at the river.  A lovely section with a long narrow riffle leading into a wide slow run with another short riffle at the end. Despite all this 'fishy' looking water we only received one hit and Mark lost that after a brief fight. I had said it was strange i hadn't seen a rise as the water looked better here (and about 3 feet clearer) than where i had just been. With time against him Mark dropped me back off near to where i was at the beginning.

The rain was constant now and as i walked down to the river 2 trout swam past within feet of me, flapping through the shallow water, there bodies half covered in the shallow riffle. Was a first seeing them move through riffles this shallow naturally so i tried a nymph.  Fishing the riffles i was constantly getting weed until i reached the edge of the pool right at the end where i got my first hit. A small trout, very pale and spotless compared to most of the trout i catch, I released it with the camera under water again and it swam around checked out the camera and came back to me, i turned it back round and it swam off properly back into the main river. 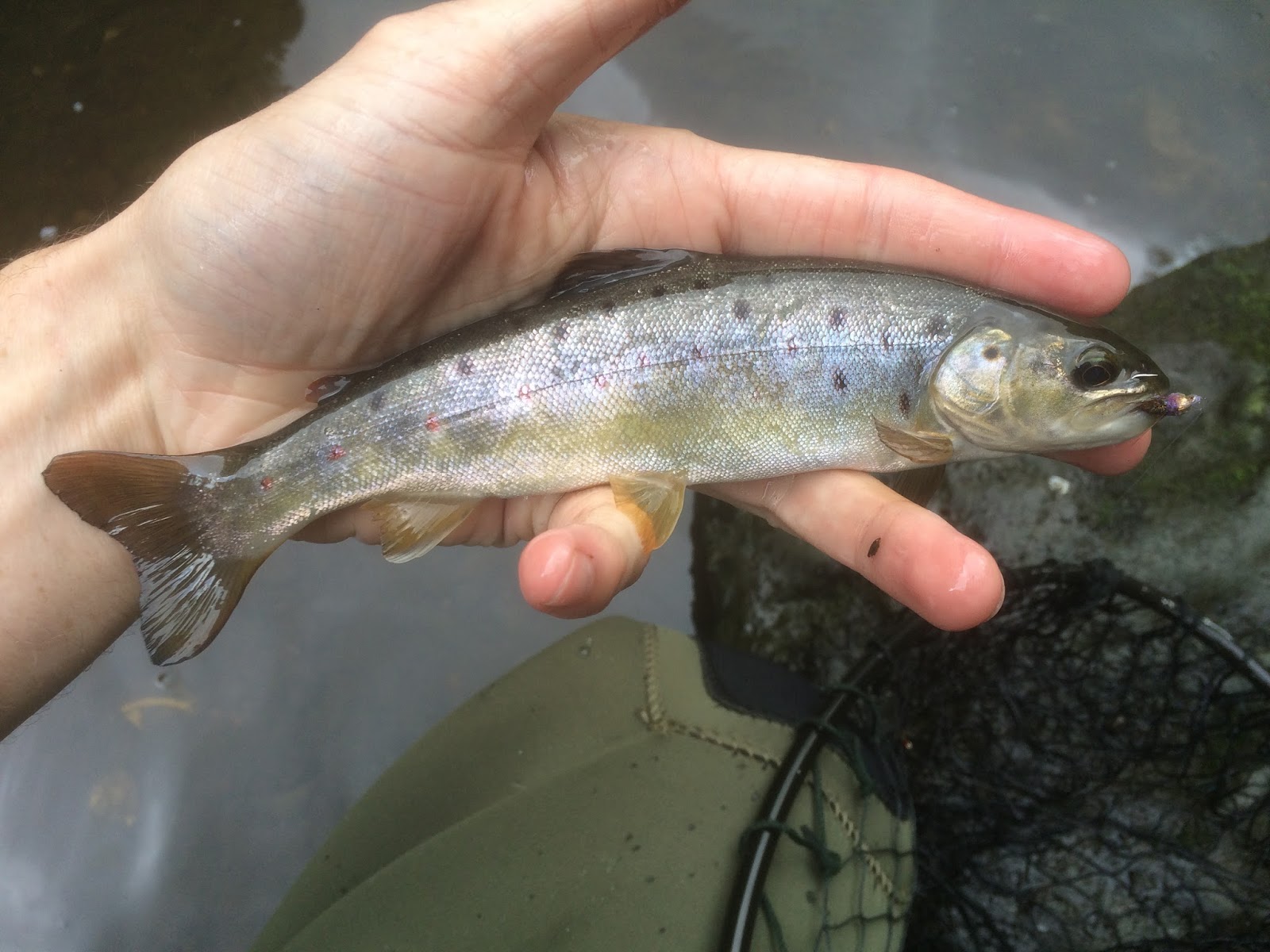 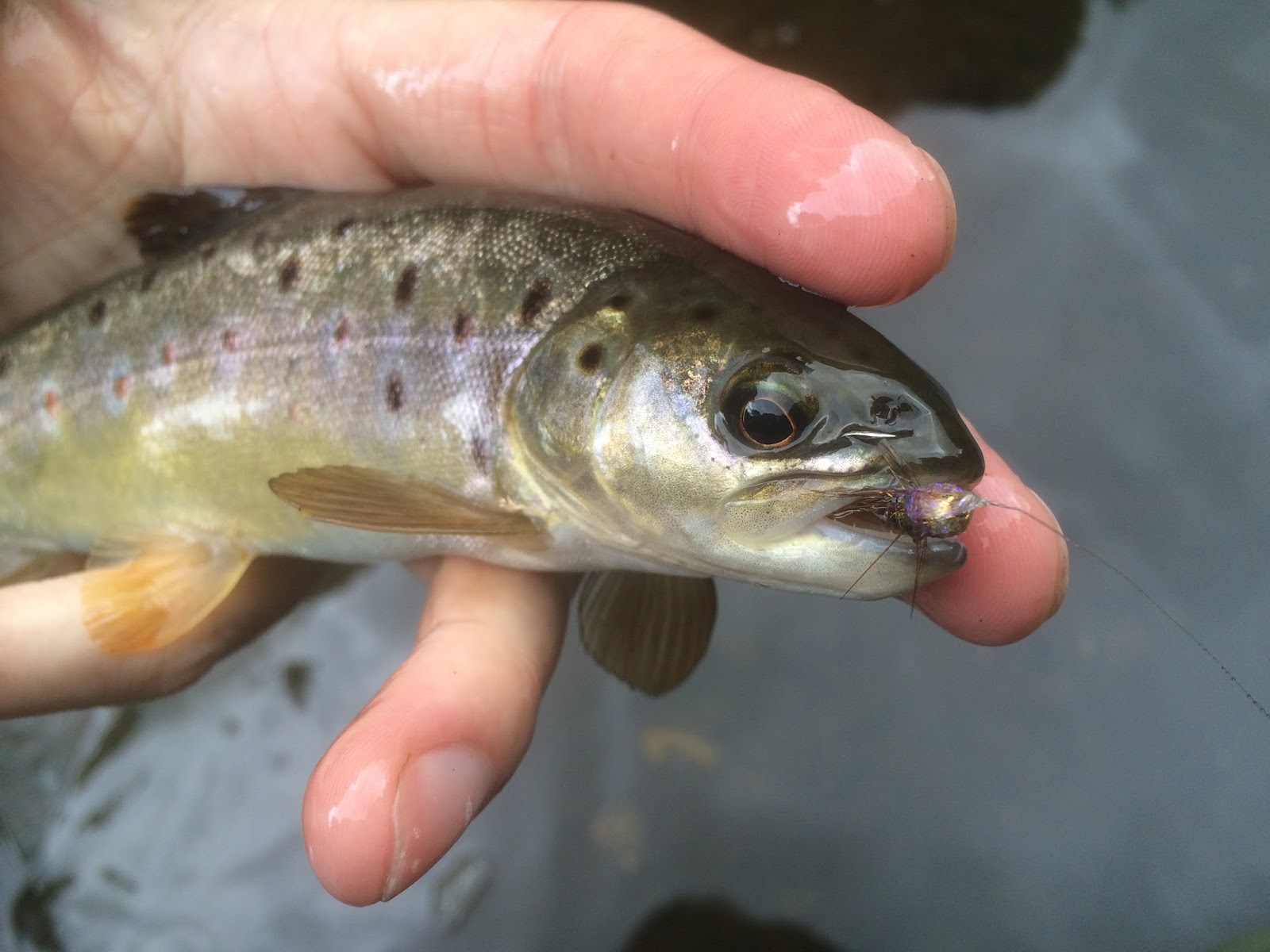 I nymphed my way back up but the weed was winning and now a couple of fish had started to rise above and below the riffles. So back on went the dry and i began to cast under a long run of japanese knotweed. The rises were hugging the foliage as i suspected they were waiting for insects to wash off the plantlife as very little was flying in comparison to the amount of rises.  I got a take after 5 minutes of slowly edging up, several rises around my fly had teased me but a small fat trout was greedy enough to grab the fly.  Another fish was rising about 10 feet further ahead but after a small look and miss it went quiet so i headed to the pool below the riffles. 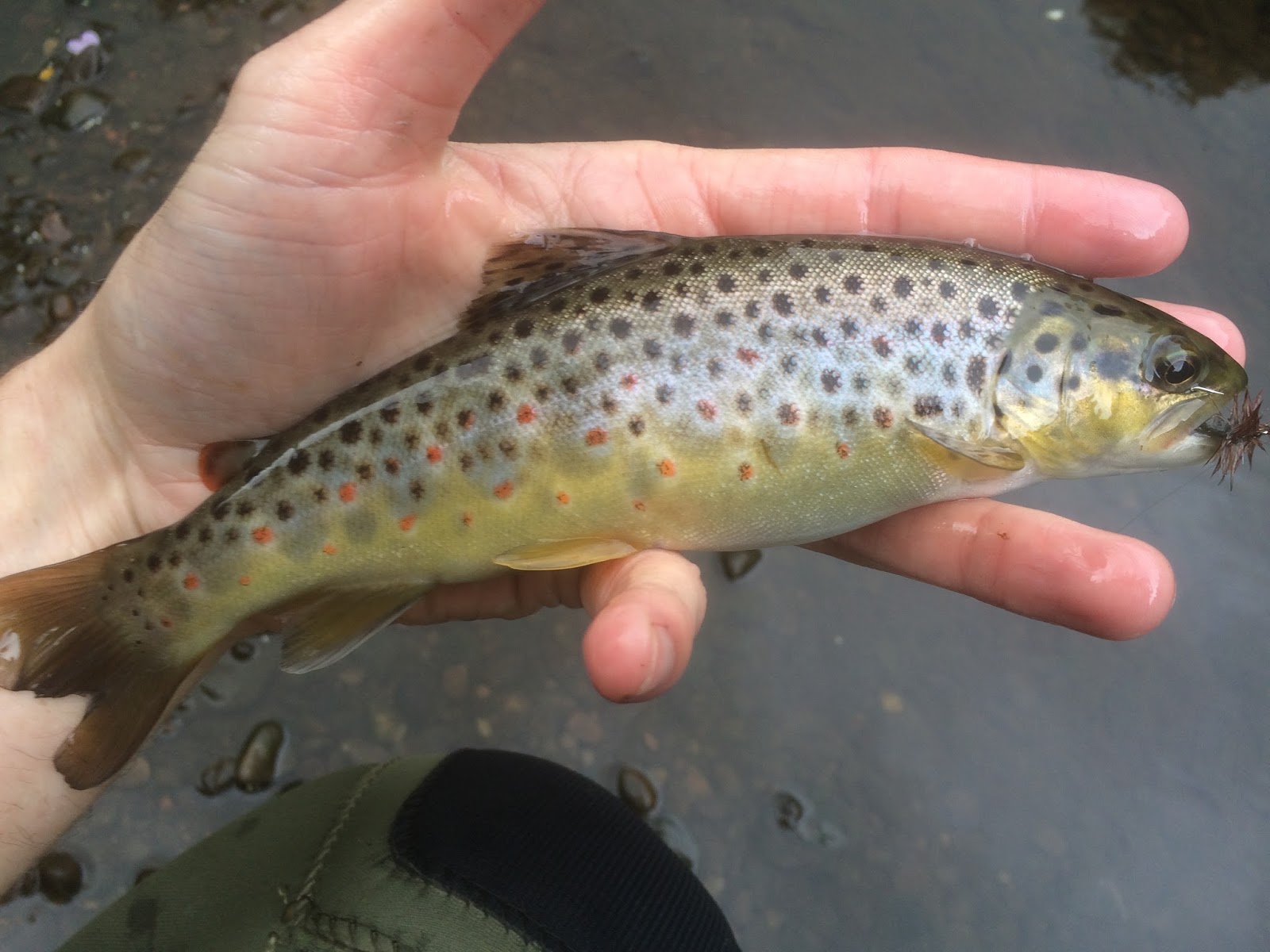 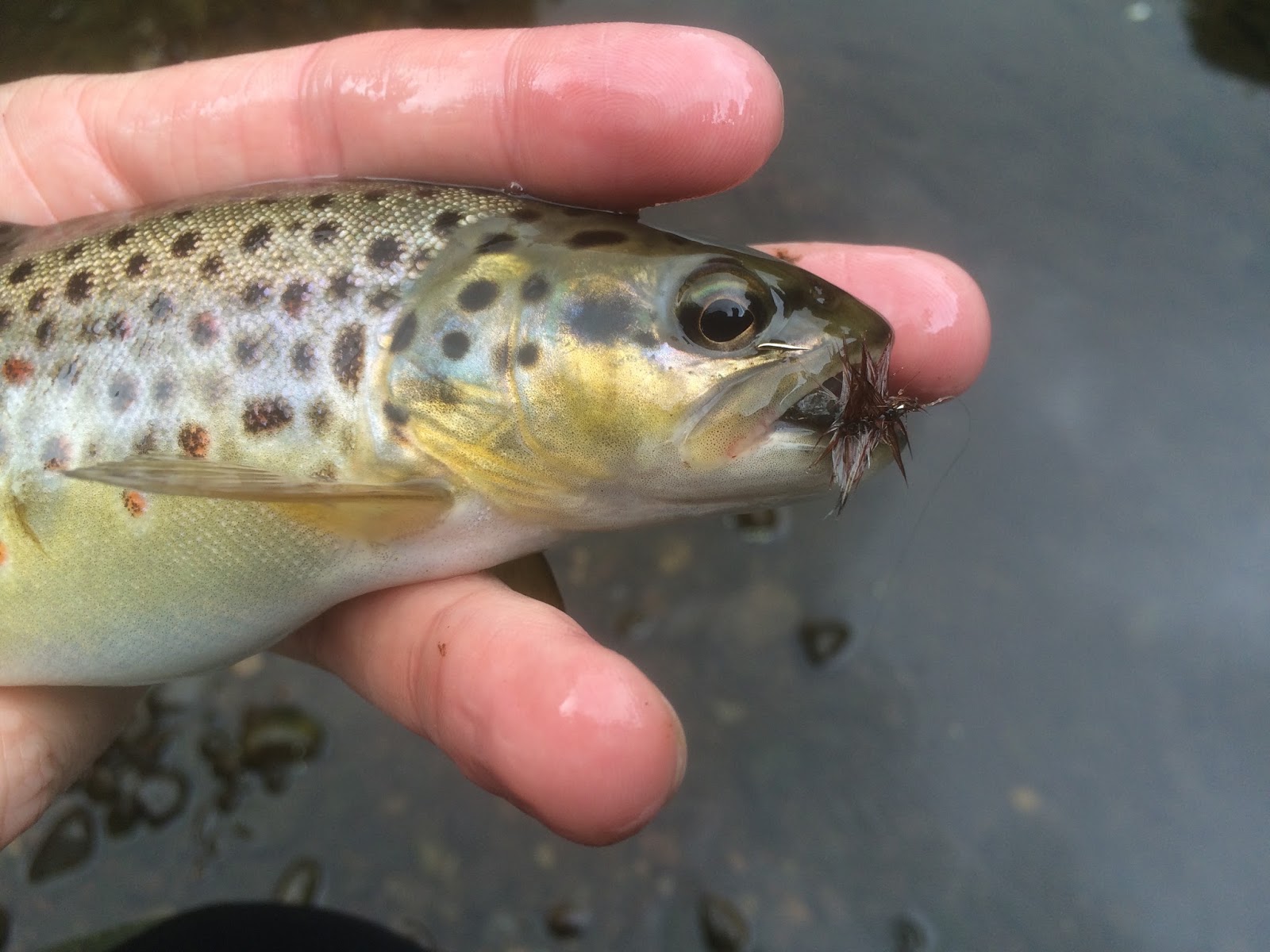 There was plenty rising here but the longer casts were subjected to two looks and misses, the problems with casting downstream but then there was a couple of rises almost opposite me on the far side. I cast 3-4 times when it rose again another 3-4 times and it came up and grabbed the fly. It was surreal as the murky water and the dark cover from the trees allowed me to briefly glance the trout on its way up inches below the surface as it went for the fly. Almost tempting me to strike before it had took it. This was a better trout with a good fight, bending my rod and taking a small amount of line but it was shortlived and soon in the net. A positive 11 inches. 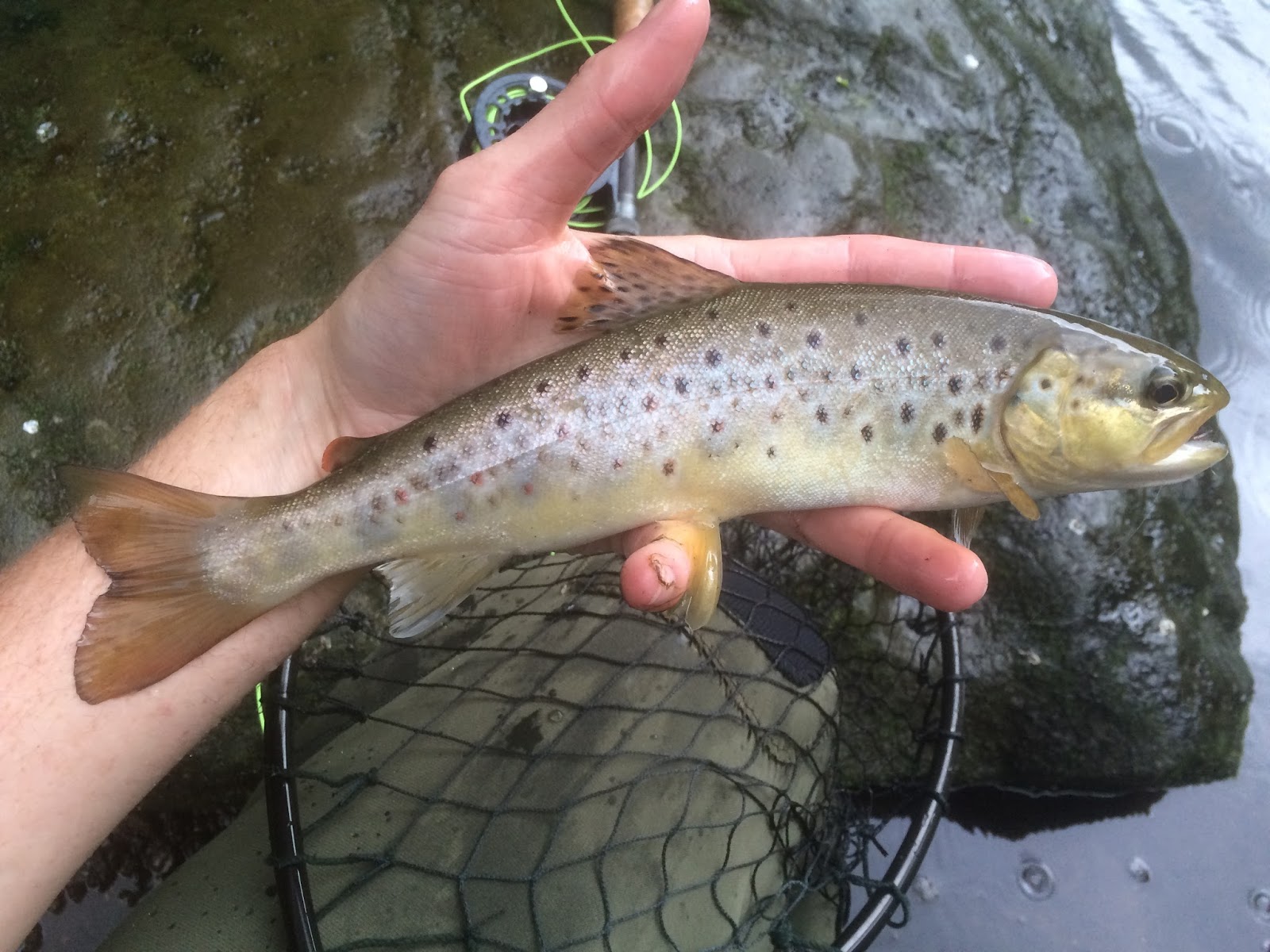 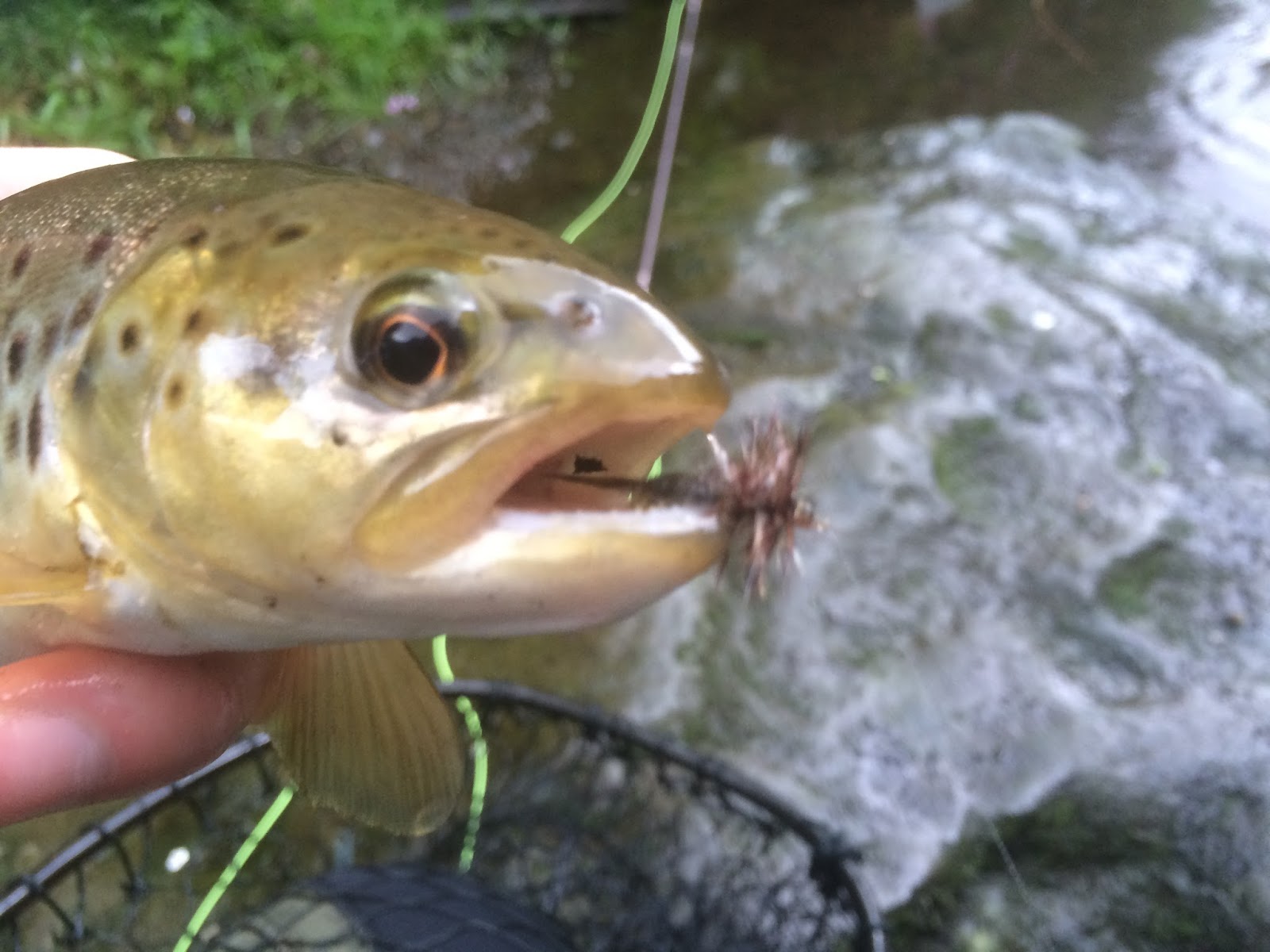 It was a fairly quick release as the second trout was rising still in almost the same position so i set up quick, blew my fly dry and cast, it didn't need much convincing and it was soon hooked. It was my smallest of the day but also my strangest. The lower jaws middle hung more than other trout, i pushed it to see if it was just because it had it's mouth open but it was hard. A small defect that didn't seem to affect its feeding habits.  It was soon away and i called it a day. A lively 4 trout on the dry and 1 on the nymph showed how i've increased my ability to adapt to situations now where nymphing isn't the best or easiest option. It is still my favoured method but dry fly fishing is just as fun! 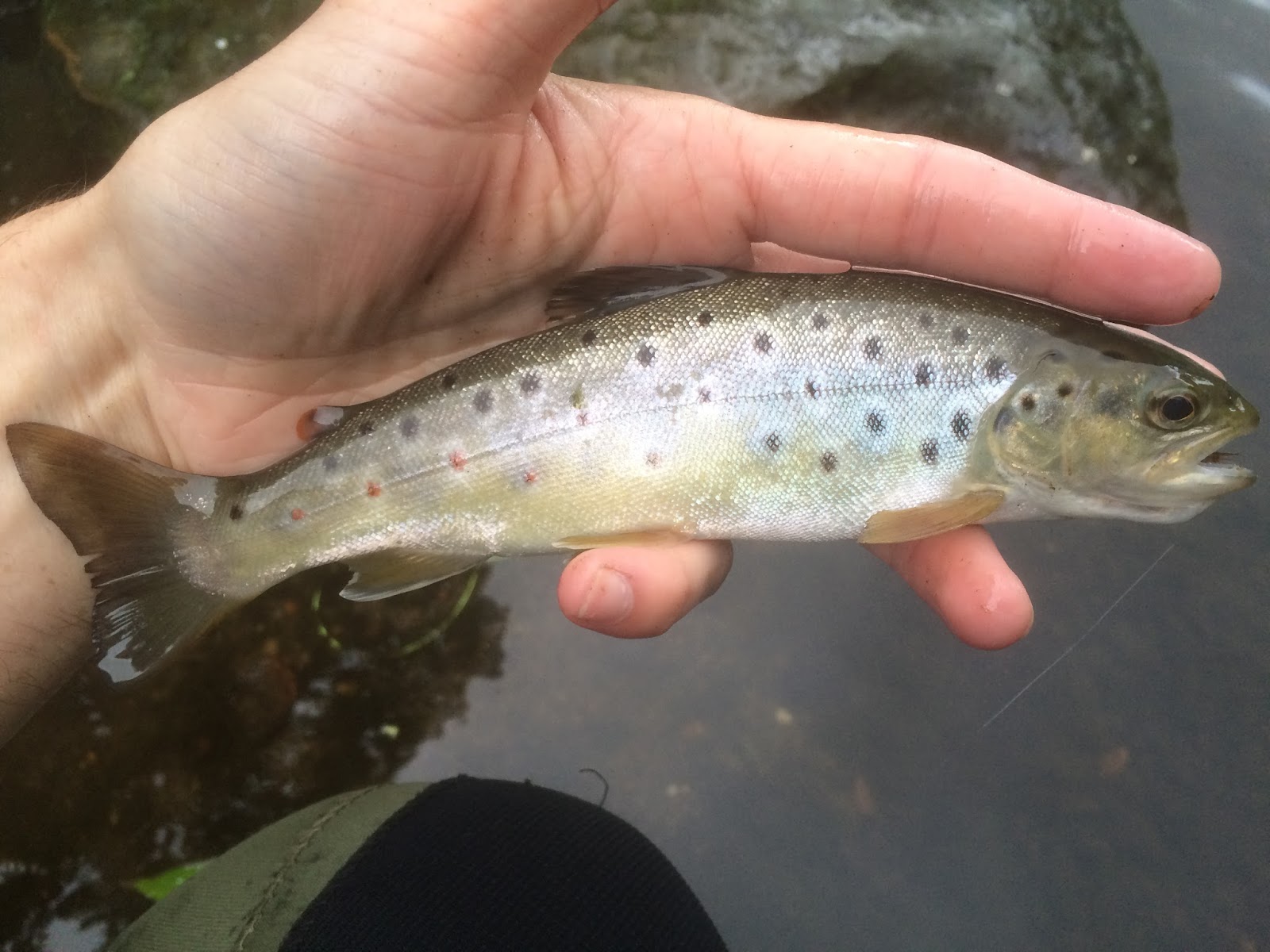 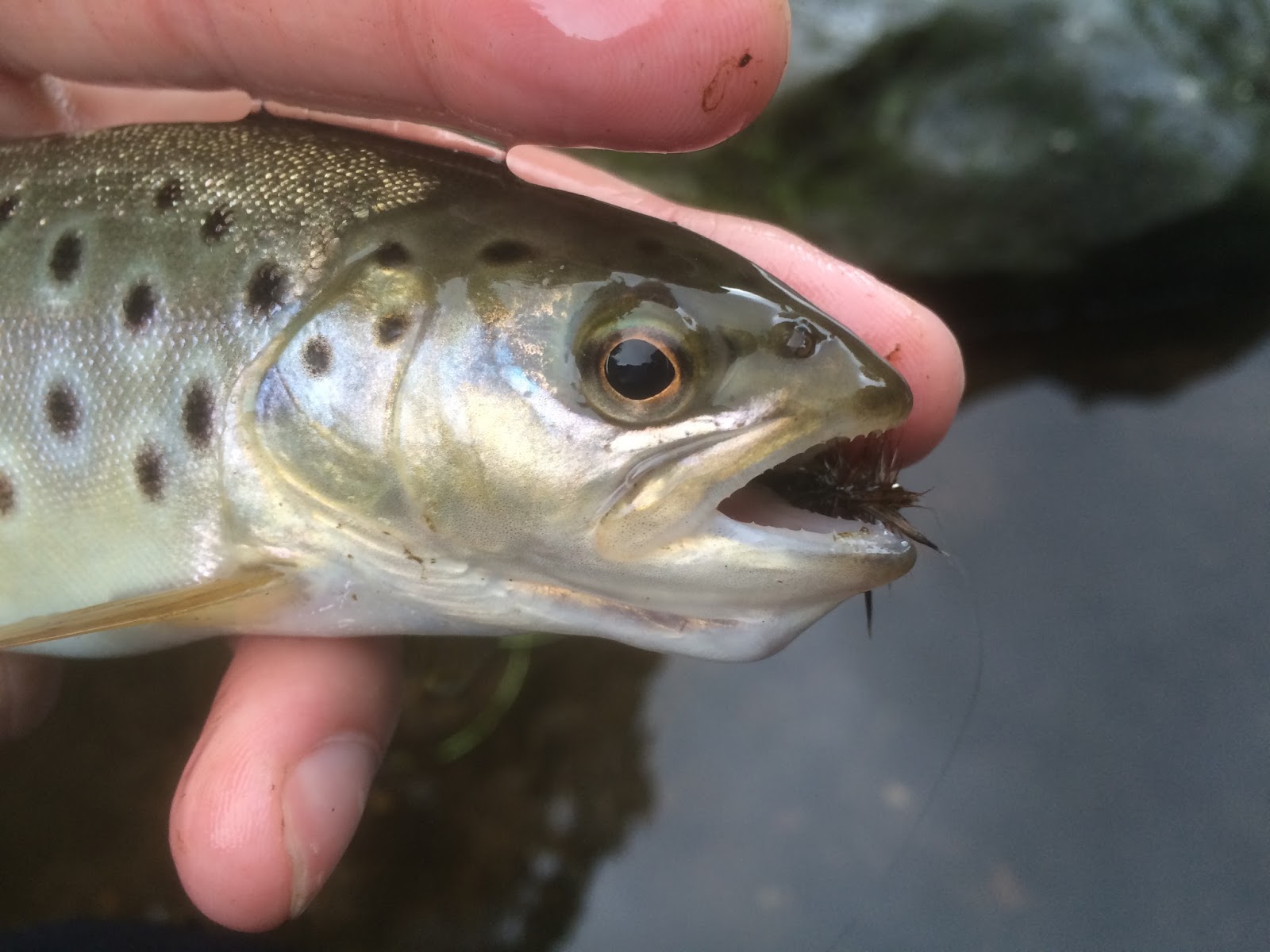