With the close season just 2 weeks away and a unusual misjudgement from the weather people. It was supposed to rain heavily all week. The rain only happened a couple of days prior but i was surprised to see the river still clear, around 3-4 feet visibility and was up about half a foot or so.  A strong wind tore over the river when i got there and there was no signs of rising fish as there was no flies hanging around in the wind. Going for a klink and dink set up i stuck on a huge dry i had never used, it was sort of a mix of everything and a good 2 inches. I wanted to use this fly as with the raised water level the riffles were faster moving so a heavier nymph would sink a klinkhammer without question.

It was a slow start with nothing for a long time. A small rise here and there but nothing worth switching to a dry. It was only when i was going through a heavy riffle section when i got my first hit but it wasn't how i had expected it. Instead of going for the heavy nymphs i had trailing below, the trout had gone for the large dry on top. It's size made it visible in the rapidly moving water. The fly was bigger than the trouts head, and the hook i'm sure was a size 6 or something so i'm surprised it caught the hook so well.  It destroyed my rig with the jumps and twists it did so i headed above the riffles to the slow pools where the fish tend to rise. 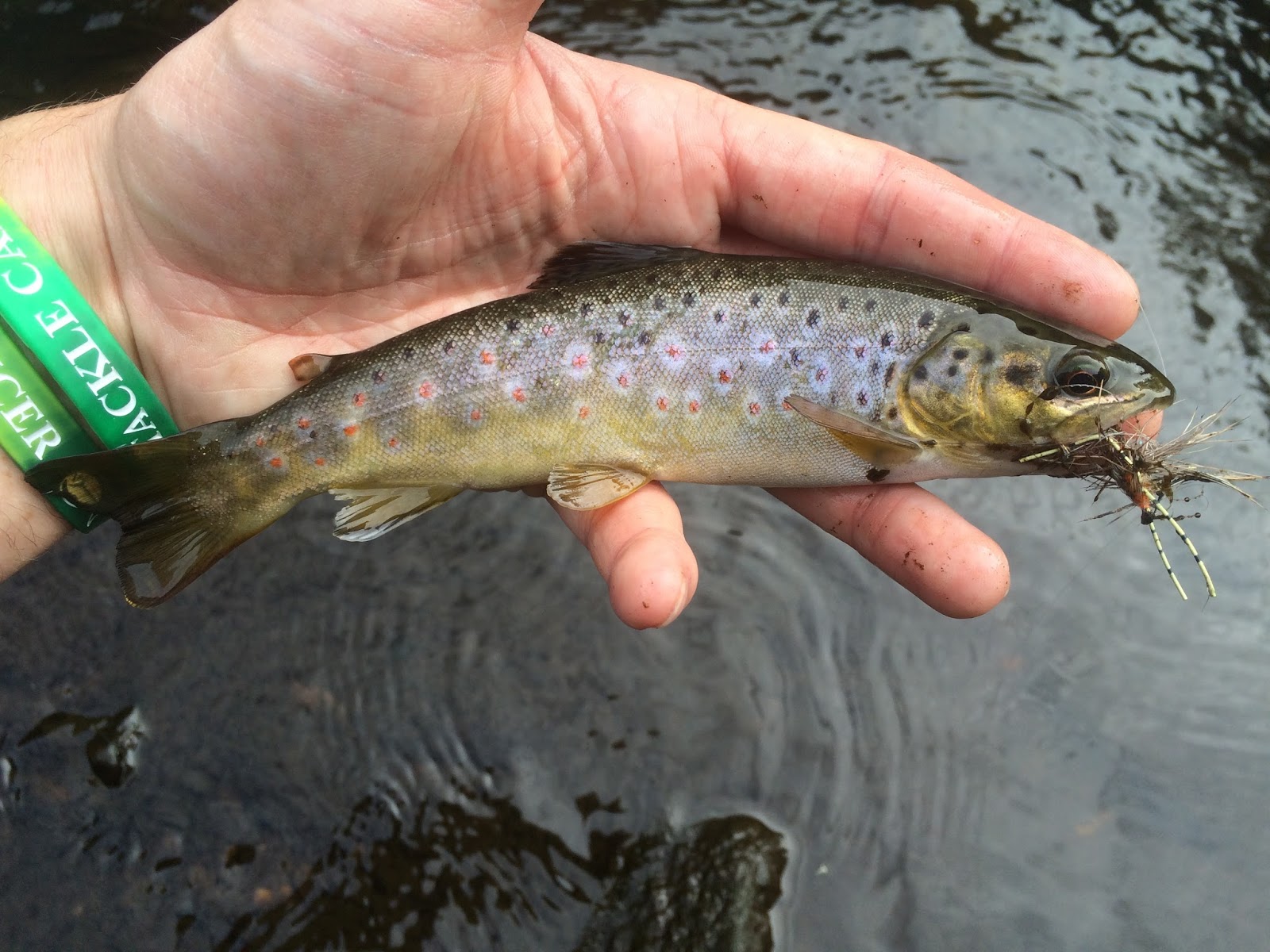 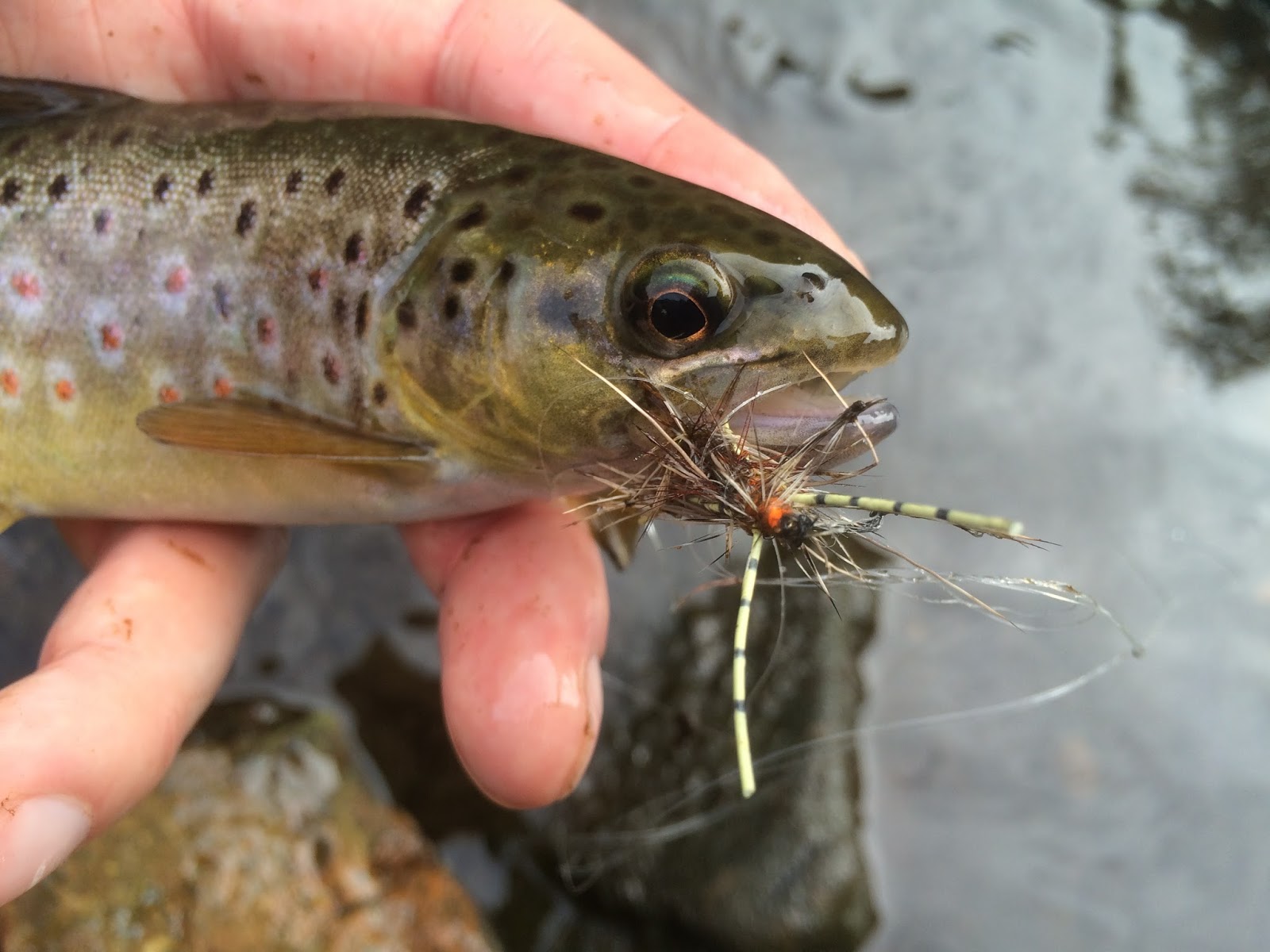 It was quiet at first, a brown labrador had a swim while i set up on a dry. Still no respect from the majority of dog walkers.  Up ahead the riffles that led into the pool were alive with rises but with the huge amount of currents going against each other it was impossible almost to present a fly. The water flows to the far bank where it is dangerously deep but a great holding pool. I had a few casts but to no avail. Thankfully fish had started rising beside the boulder i caught my PB dry trout. So i walked back downstream, slowly made my way into the middle of the river and cast to each rise.

After several minute and switching back and forth between flies. BWO, Blue dun and finally back on the Adams (this time one with a yellow butt). I had my polaroids on my head at this time as there as it was easier to see the rises, but i seen a dark shadow go towards my fly then swim away. Was my mind playing tricks? I popped down the polaroids and low and behold i seen the trout that was rising so confidently. It was swimming around its pool all happy and dandy, it's bright orange fins giving it away as it cruised around. A couple of casts later and after a double rise from the trout it took my fly.

It was a soft take compared to the rises it had been doing but once i struck it made an almighty splash. It pulled hard, my rod keeling over and i fought back, turning it round it swam towards me. Gaining some line back it pulled away again and went into a 'death roll' several huge splashes on the surface that got my heart pounding, giving it a little slack it calmed down and swam back towards me, i got it near the surface for a brief second but as i pulled it towards me grabbing my net i allowed it get it's head back down. Seeing me step towards it i spooked it and it show off. Realising where it was headed i dropped the net and tried to pull it to the left away from the submerged rock i lost my last big trout. But it was too late and the extra force from the boulder snapped the line clean.

I almost threw my rod in after it as i reacted angrily at this misfortune. It knew where to go, it was probably the same trout hence it used the same trick. I sat on the bank sulking for 10 minutes as i let the adrenaline pour out of me. Honestly, i was gutted, it would of been a great way to end the trout season, my first! But if they were easy to catch it wouldn't be fun. The fight is the sport in them.

I headed upstream as the rises stopped. The commotion from the monster clash had caused the rest to go to ground. I seen a small rise on the right but as i began to cast towards it, in the distance a trout leapt a foot or so clean out of the water.  Do they grab flies midair? It was difficult to judge size but i didn't want to spook it in this long perfectly calm run so i teased myself with the thought of a long cast. Hell why not, i had all the room in the world behind me. A single 30m or so cast hit it's target, and the trout didn't wait long.

It rose straight away and having judge the distance right my line was in good stead to strike. It was a good strike and it was a solid fight back, i realised the risks in long range casting when it decided to swim towards me, trying to get line back in, i stripped a good 20m but had to reel it in to avoid tangling. Keeping my rod in a position to try to keep the line tight as possible i reeled in as much line as i could before the trout swam to me. Grabbing the line with my hand i guided the trout up and towards me net and it was in. It was a beautiful trout. The colouration of its grey smokey patterns and it's yellow belly where a bonus to it's size. A joint PB on the dry, 13 inches. (Thought it would of been miles smaller had i landed the previous fish)

It boosted my moral and put a positive spin on the day. I guess even with losing the trout it wasn't a bad day, i had still managed to outwit the old dog but now it is 2-0 to the trout, or do i award the points to the boulder? 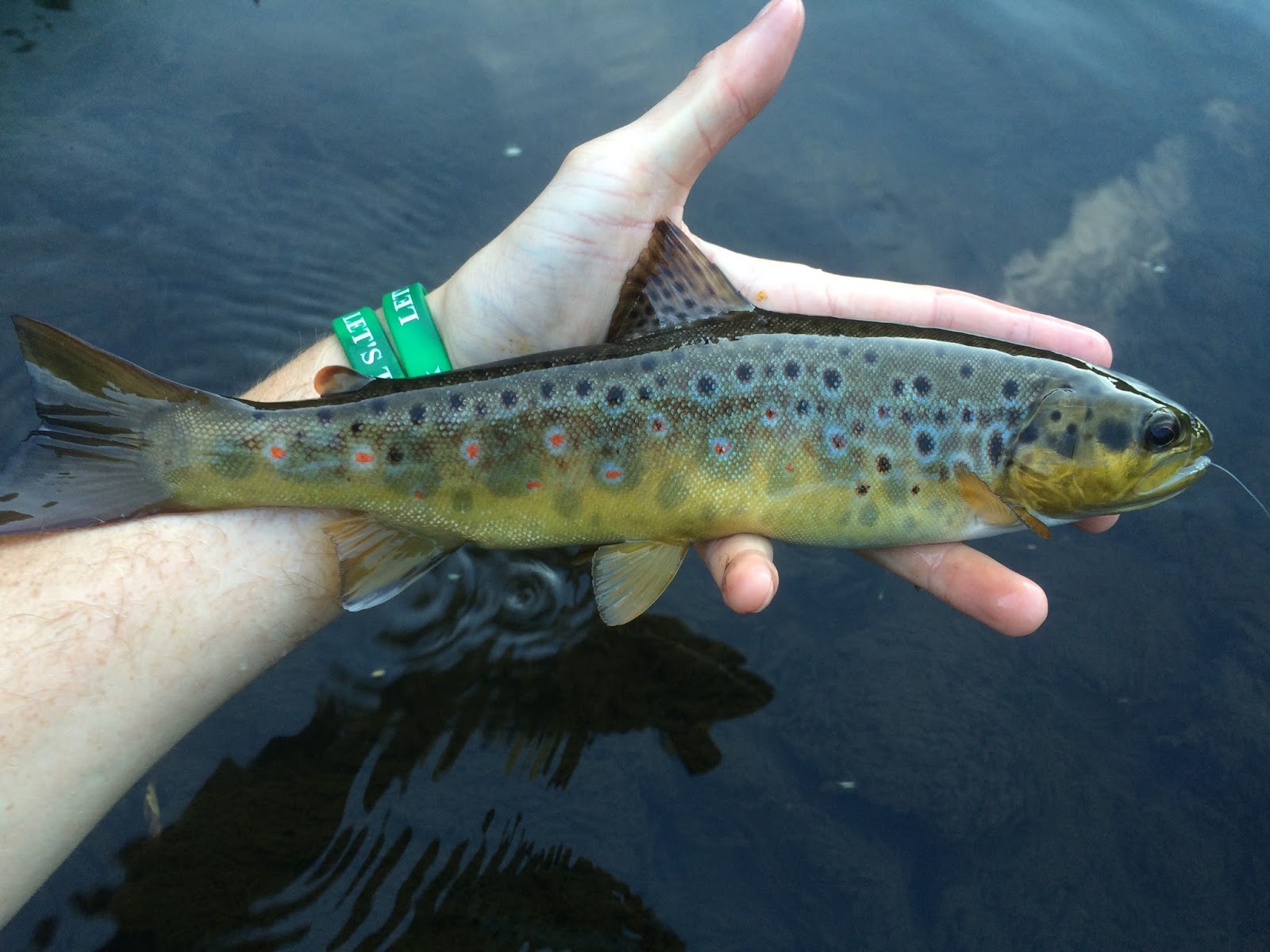