Today was my last official day trout fishing in my first season of fly fishing. It has been a joyous one, with, including todays catches, totaled 178 in trout alone! Having not blanked since my first 5 trips when i first started self teaching i have had some impeccable days, it could and should of been alot higher, but i am still a rookie, i can only imagine the amount of fish i would of caught if i never lost one or missed a strike. They'd be a couple of monsters in there too!

Regardless of all that i knew today wouldn't be easy. It had rained the day and night prior and i expected a raised river and murky water, that it was, but with a gale blowing through that only more impeding my fishing. I decided i would go for a mooch around, more of a long walk, fish some holes i had fished before and then making my way back closer to home fishing spots i'd never fished.

I reached the river and with a couple of grayling trips coming at the beginning of October i decided to pop on some pink and see how the trout liked them. Hell, might even catch a miracle grayling in the Irwell! Setting up with the klinkhammer and 2 pink flies below it started to pour down. It was still sunny but it was hammering it down none the less, the wind blowing it into my face. Now rain doesn't deter me so i wasn't to bothered. I am English after all! I was just hoping we didn't have too much that the river would become a raging torrent.

It took an hour or so before i got my first take, the water was quite heavy but a crappy weed hugged the bottom meaning a heavy fly would just cut up in it, even the weightless ones were pulling it in every few casts.  It was a small trout and wanted to jump down the rapids, which i tried to avoid, mainly as the current was enough to push it to the bottom and hurt the fish. However it didn't take long before it was in the net. 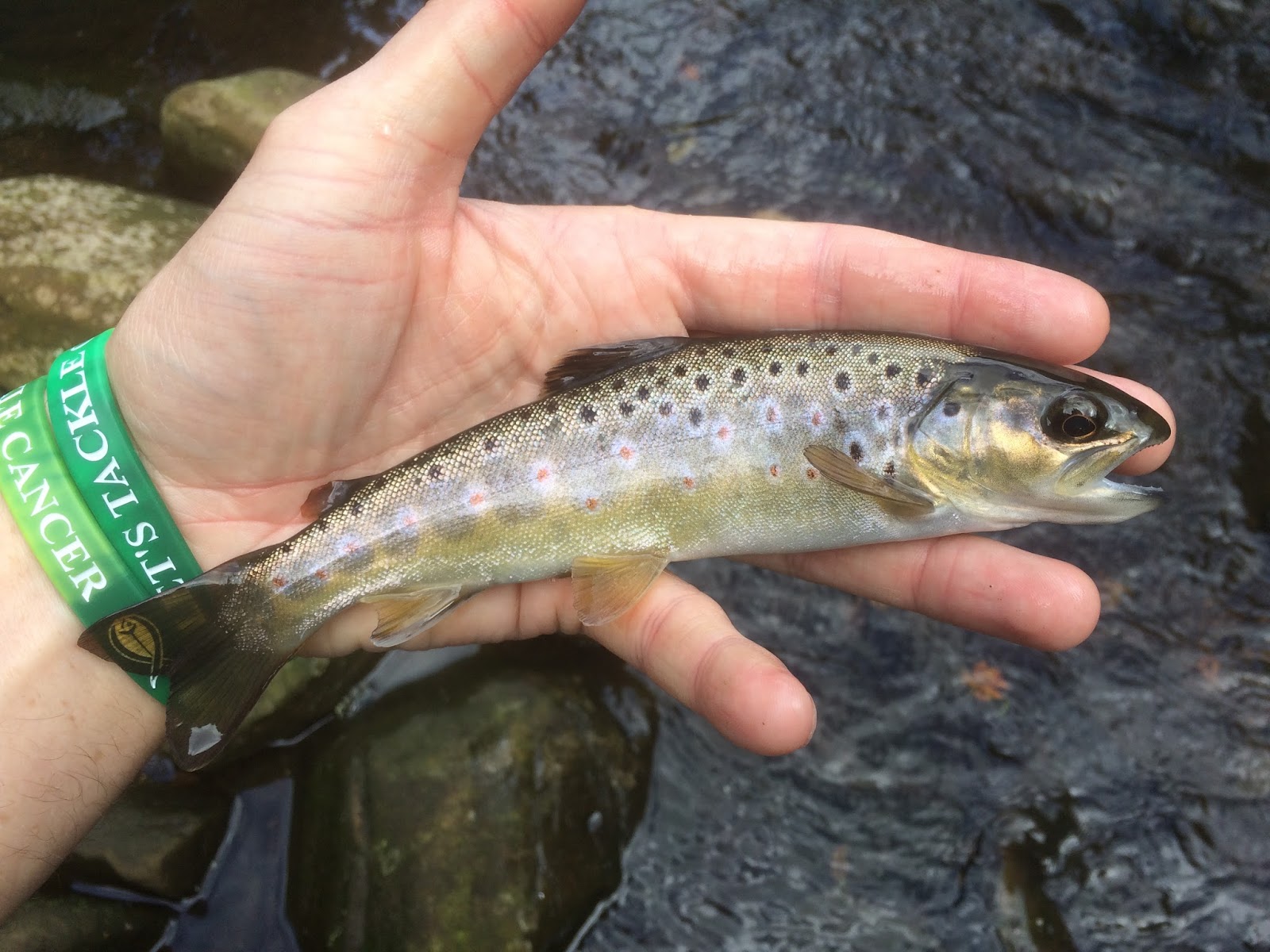 Now still in familiar territory i made my way upstream to the pool below the tree. Following the 'food lanes' out from the riffles i got a hit but after a couple of seconds it was off. I persisted and a couple of casts later i was in again, this was a bit bigger so made losing the first not a bad thing. The current made it tough to bring it up but once there it was easy to net.  A nice 12 or so inches. 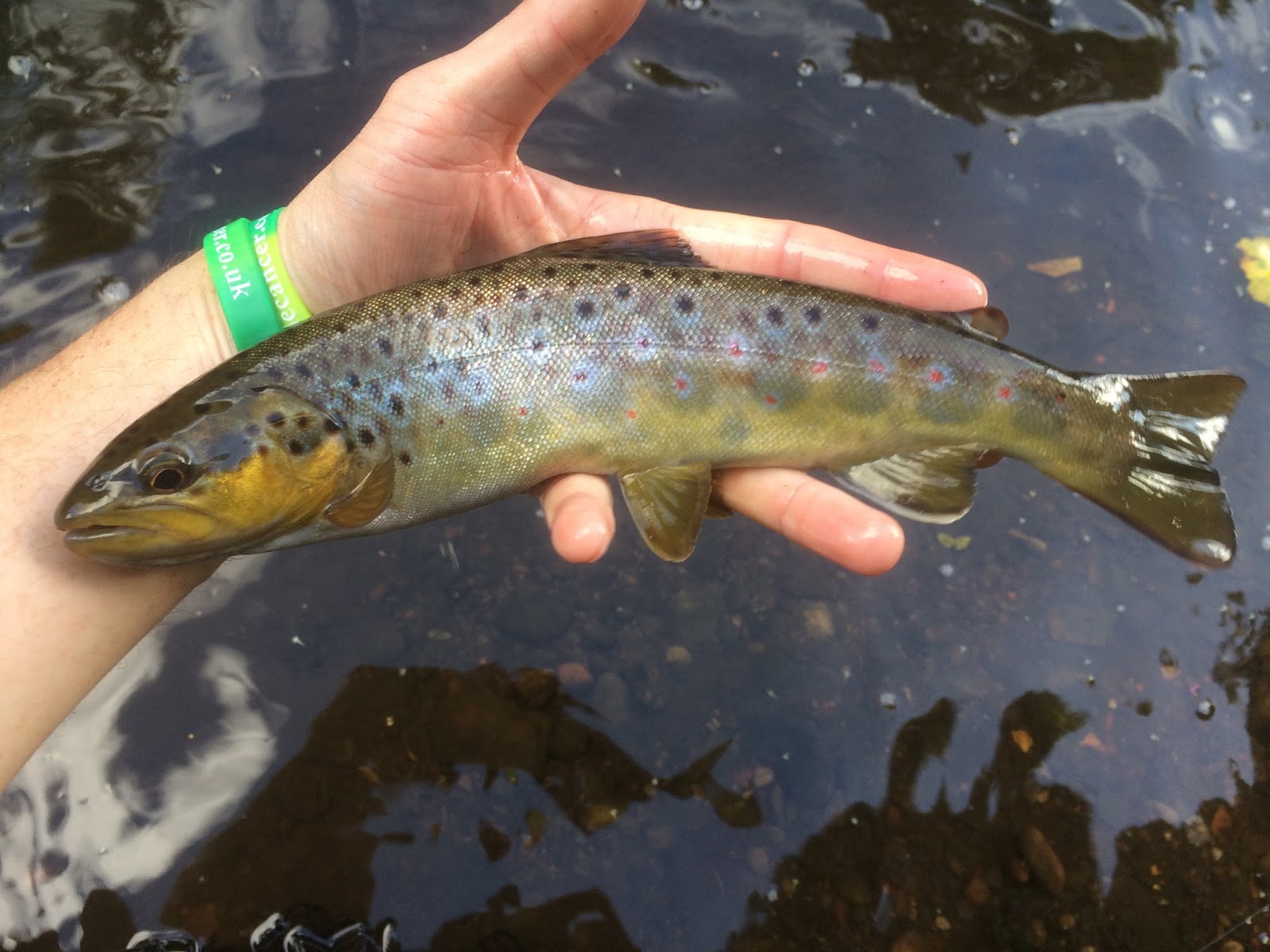 I moved on up and forced my way through a forest of knotweed, reaching a pool i had fished earlier in the year when it was easily accessible. It was a big deep pool and even the shallow side was balls deep and i'm 6ft 8 so chest height to normal people.  Thankfully the bottom is ok after you get off the slippy rocks, a mixture of silt and sediment you can stand there quite comfortably. It was probably the third cast when i felt a slight pull and a struck into a solid fish.  It stayed deep for about 40 seconds before i even caught glimpse of the fish. It was a good trout. A floating stick attempted to create havoc by catching on the klinkhammer but i flicked it off with a flick of the rod.  It was fighting just below the rod tip now, feet away from me, swimming towards me at one point and turning away at a cheeky net attempt.  A few more pulls left and right and i had it back on top and close enough to slip the net under. It was another solid fat 14 inch trout.  It's tail was quite small compared to some of the other ones of a similar size but it still gave a solid performance. 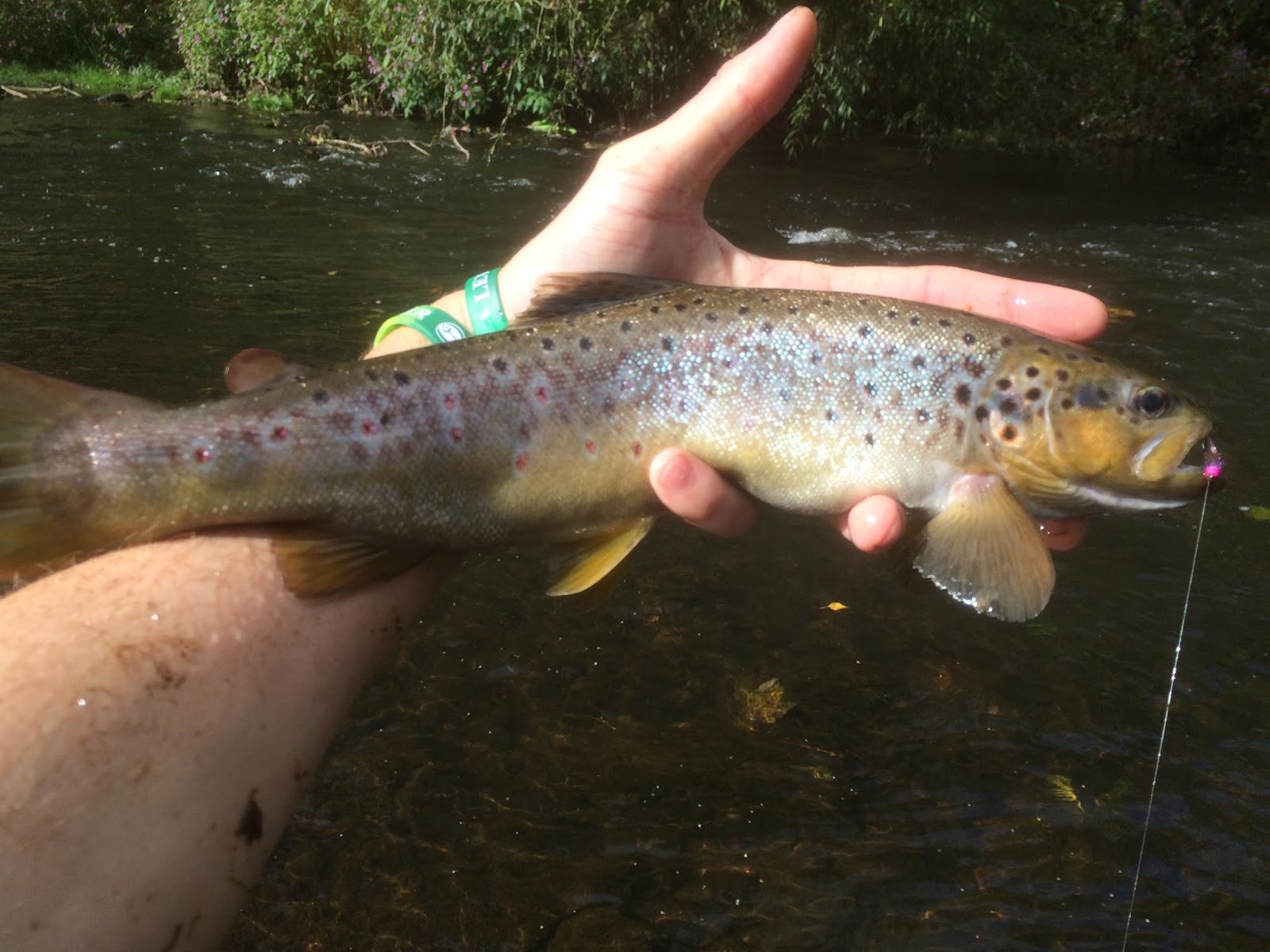 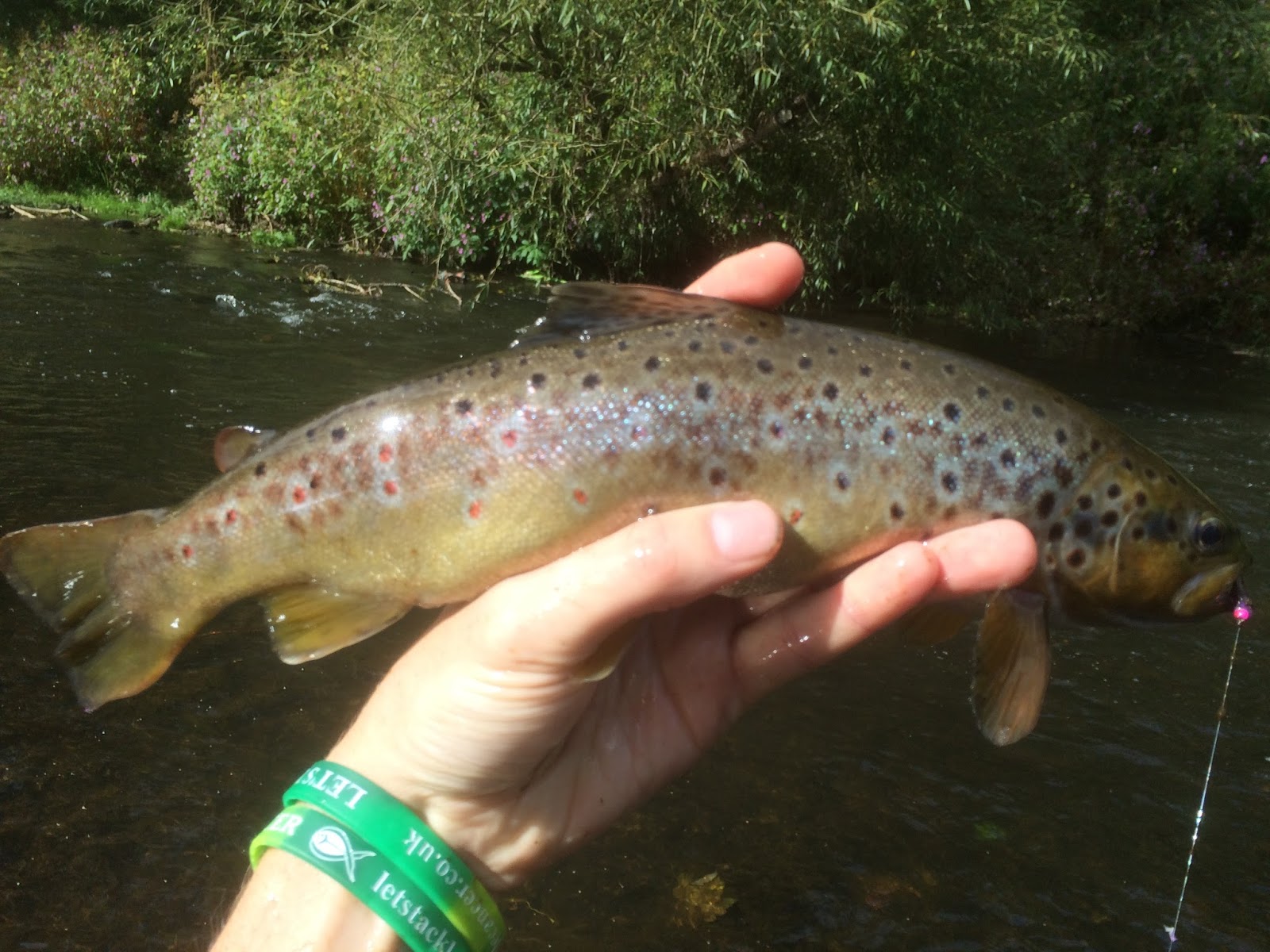 I fished the pool for 10 more mins or so but nothing came of it, so i headed further up. I reached another pool. This was not that deep but offered good cover after the heavy riffled section. I hooked into a trout and whether it was the force of the water or the fight in the fish, it fought well for it's size. Saying that it fought that well it jumped out of my hand during unhooking and avoided it's picture altogether. It couldn't avoid it's fight being captured on camera though.

Heading up to where i have had some good fish of late i hit in again to another trout. This was not as big as the others from this spot but it was a trout none the less. They were loving the pink flies at this point. 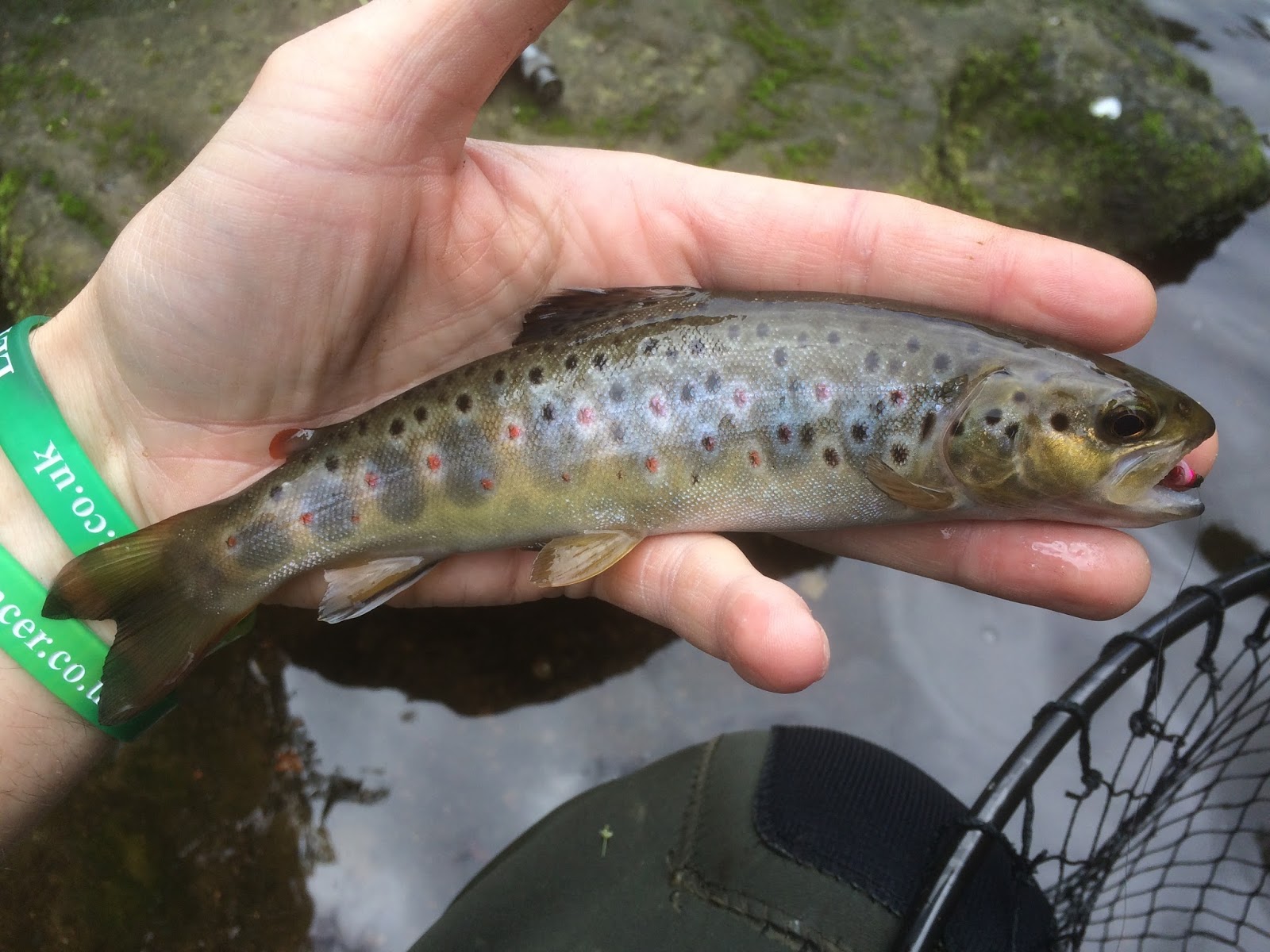 Moving  slightly up i reached the point where a trout grabbed the klinkhammer last time but this time it was the nymph it took.  The current played it's part again in pulling the fish downstream of me creating extra workload for me. 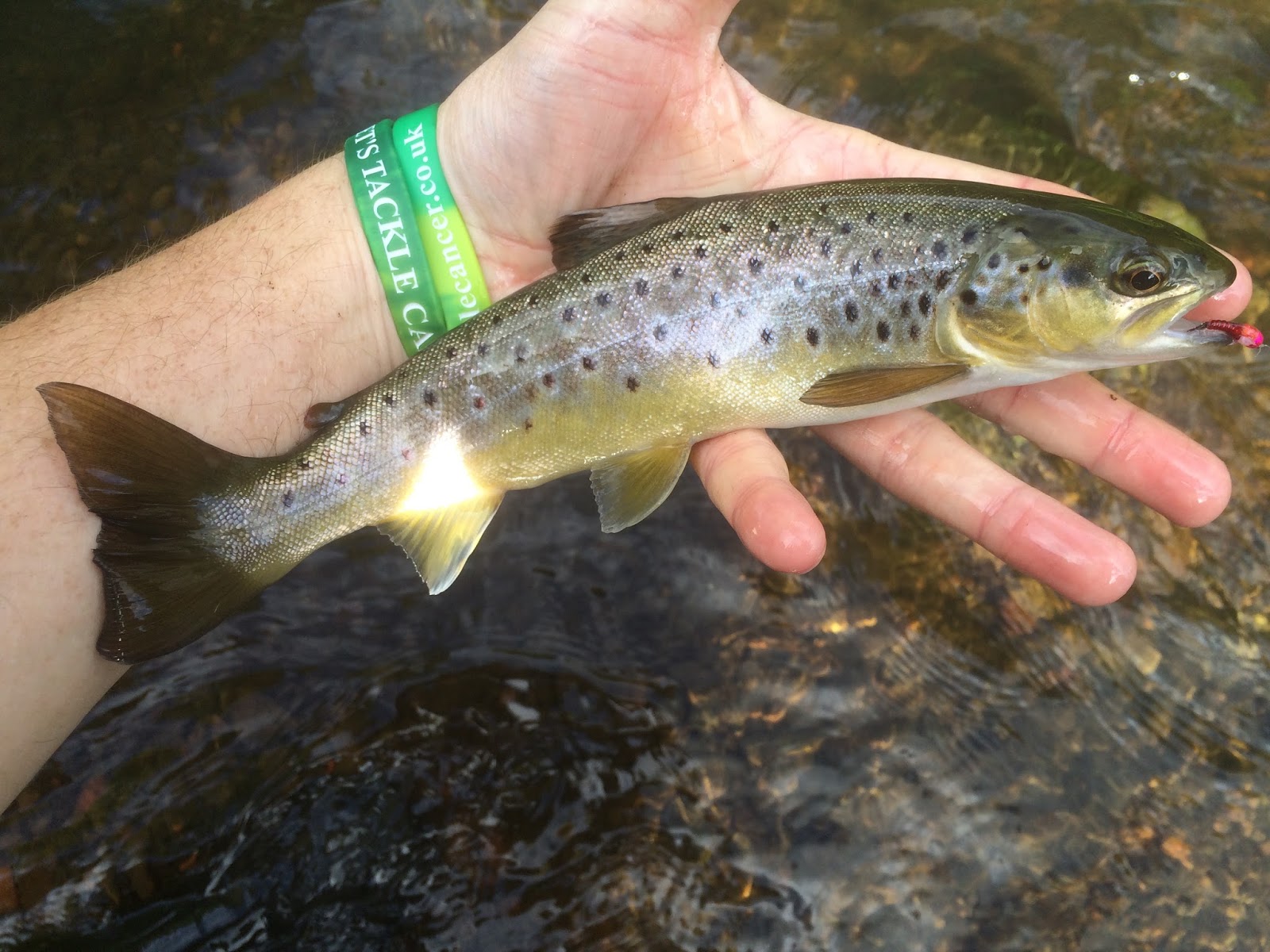 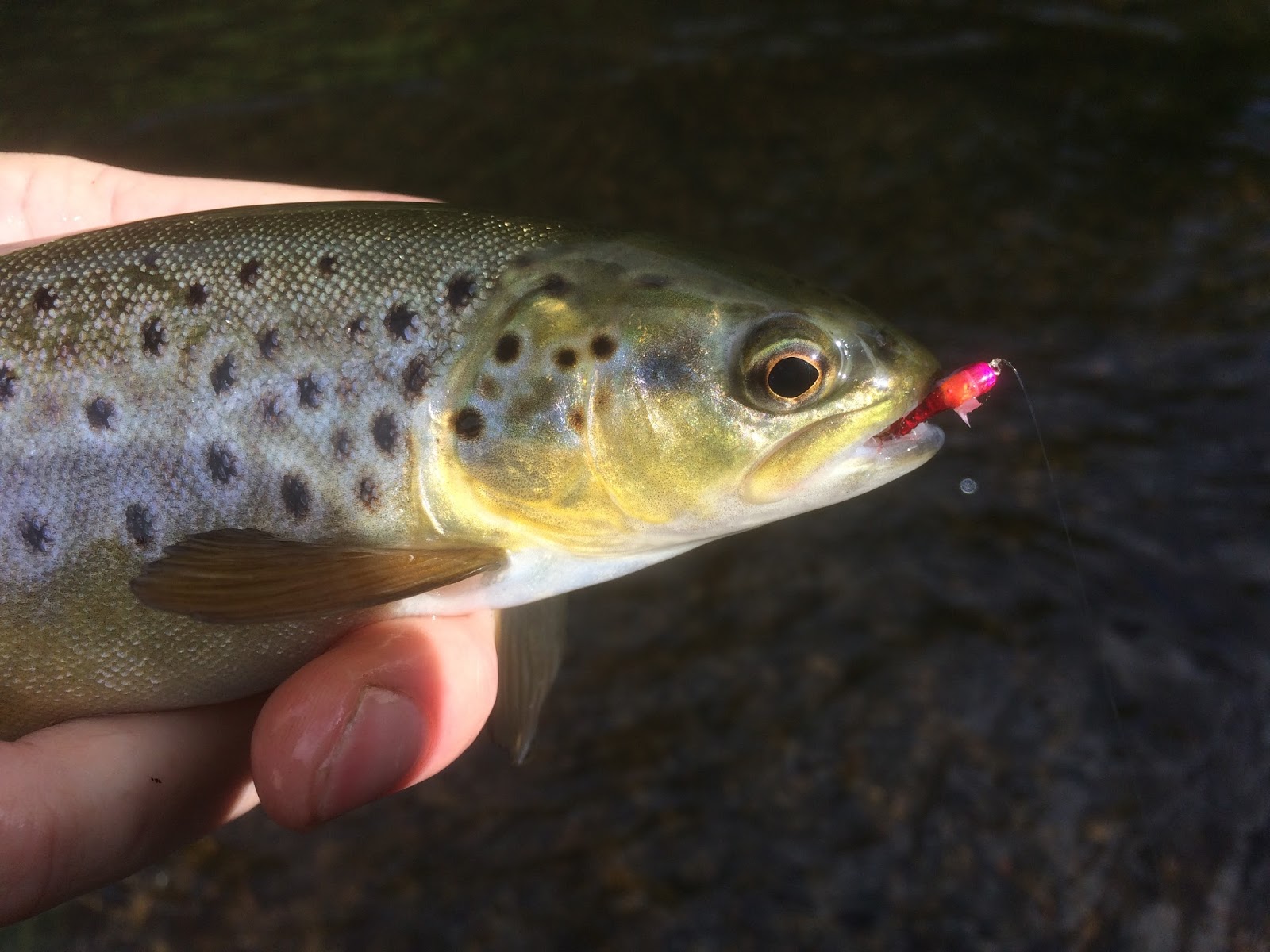 The wind hadn't helped and was still hammering away, it played havoc with my line as i nymphed my way around the river so i decided to head home. I decided to fish a spot which normally has a dog or two in it. Thankfully that dog didn't arrive till i had landed a trout.  Again this trout wanted to stay deep, and after playing it for a minute or so, it's first time on top and it was in the net. Another 14 inch trout. Leaner than the other but a good trout! This was the only one not on a pink fly, this was a black gold head with tiny diamante's. yes, grayling bling. No sooner had it gone back a dog had come in to say hello. I didn't mind much as i was on my way home and had just ended it with a decent trout. 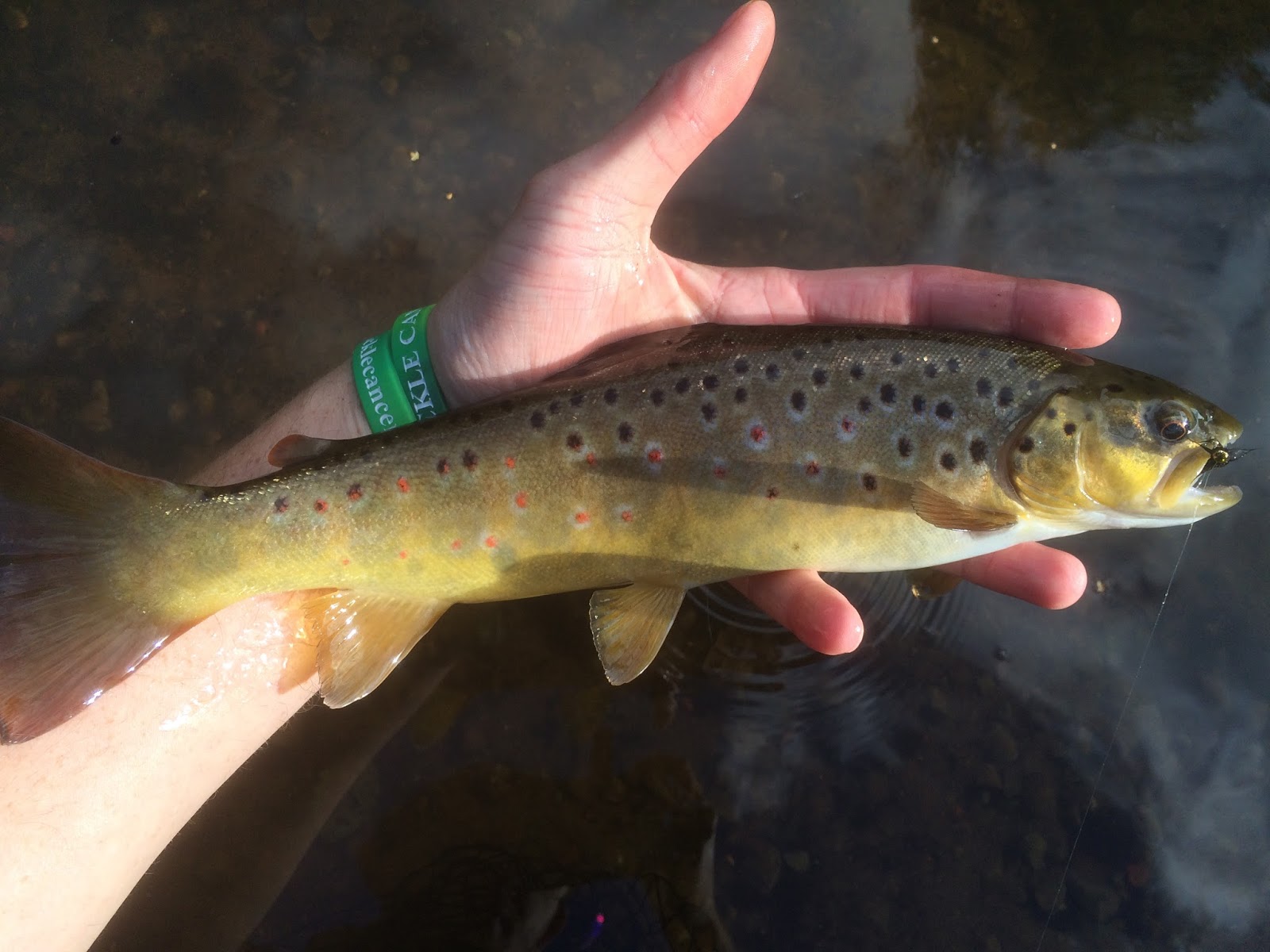 So i lost a few flies in snags, probably crap washed down in the rain, but i got to test a few flies out which should work wonders on the grayling on the 1st of October. The date might change due to weather but i'm hoping to kick off the close season with a few ladies. I'll catch trout still, that's unavoidable on a fish that eats everything edible in a river.