It was a cold May's mid afternoon on a bank holiday. Fishing the Irwell with every man and his dog and youths finally opening their bedroom doors and going to the river to lob bricks in. But hell i wasn't bothered, well not with the forecast for rain from Wednesday to Friday.  Setting up with a emerger and a nymph duo i worked the first set of riffles. A take and a small trout, but with not much else happening even in the pool above. I soon had a dog walker talking to me, he stayed for 5 minutes and got bored. 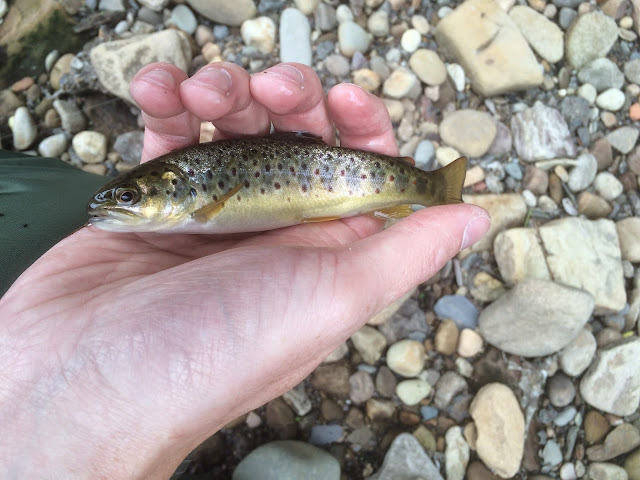 Reaching the next set of riffles it was again quiet, i'd gained the attention of a small family as they thought everytime i snagged it was a fish. 'oh what was that then' trying to save myself from embarrassment i caught another trout. This caught even more peoples attention and even as i headed upstream the small crowd followed. Fishing a pool too deep to wade i stood on the bank about 4 foot above and caught a 3rd trout. Bringing it downstream to the shallower water so i could get down and take its picture.  I then seen several trout rise very silently, so moving to them i worked the spot with no luck. The next area had several families and groups all throwing dogs and bricks into the water so i climbed the bank and walked further upstream to a quieter spot. 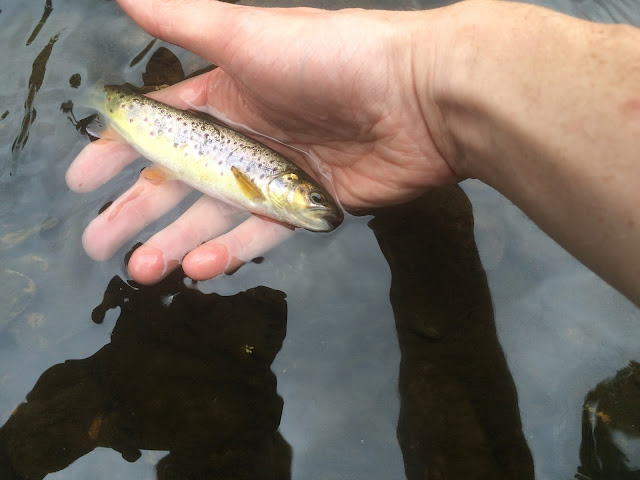 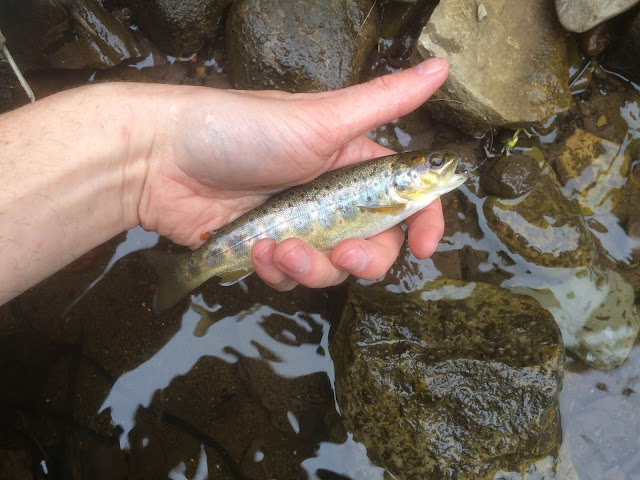 My next spot was 20 feet down a slope from a large group having a barbeque, wading up from a more precarious position to avoid their attention i found a nice eddy on the back of a shallow but fast riffle. 3 trout in 5 minutes, each swimming deep in the pool of the eddy in fast circle and then jumping when they neared the surface. One of which was a nice size but was the most battered trout i had ever caught, a small chunk of its tail missing and a V like scar near the tail, symmetrical on both sides. probably a old bird attack scar. A group of youths then appeared and started throwing in the water, obviously expecting a reaction but i just continued to fish knowing the swim was probably ruined now. 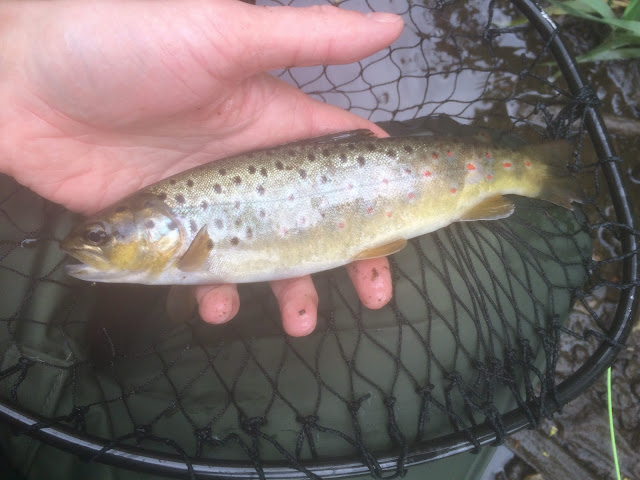 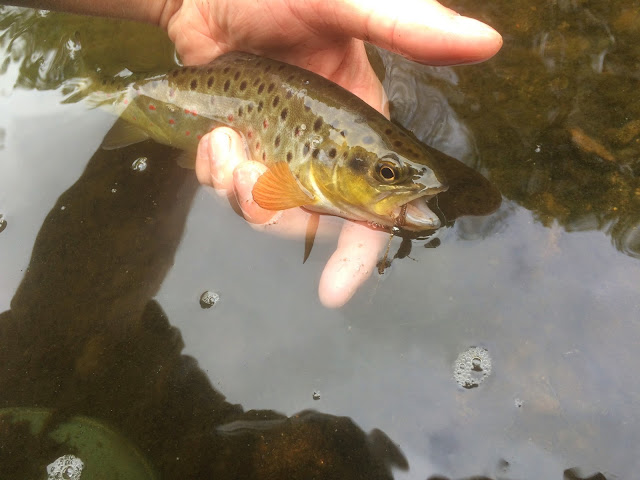 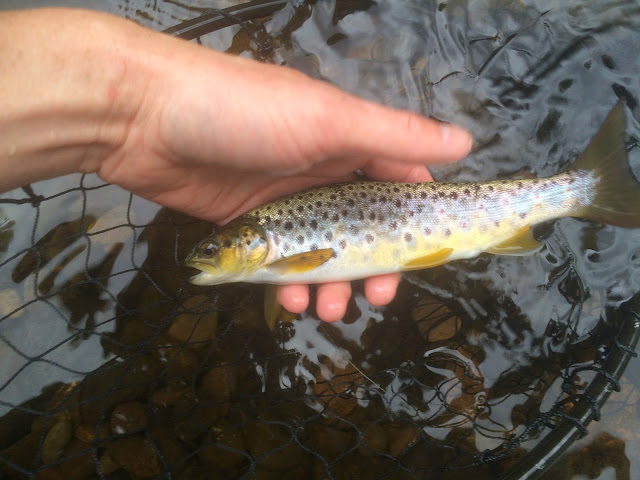 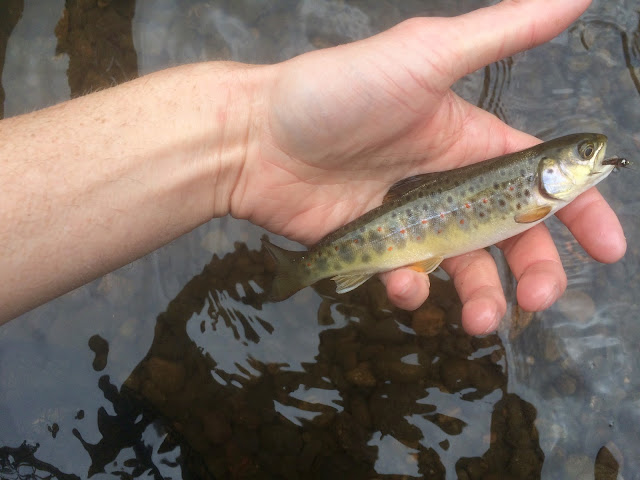 Had a phone call off the mrs at this point and through some reason or another i thought i had put my phone back in my pocket. i zipped up and stood up from the kneeling position and splash. off my phone went into the river. 'no no no no no' diving in after it (only about 1ft and a half mind) grabbing hold of my phone, with bank card and rivers license also in there, i pulled my cloth out and dried it the best i could. Somehow it was saved. Miraculously!

Moving on up ready to go home, i caught a tiny trout fry again, luckily the hook missed its eye but i actually felt it take the fly this time. Little bugger. 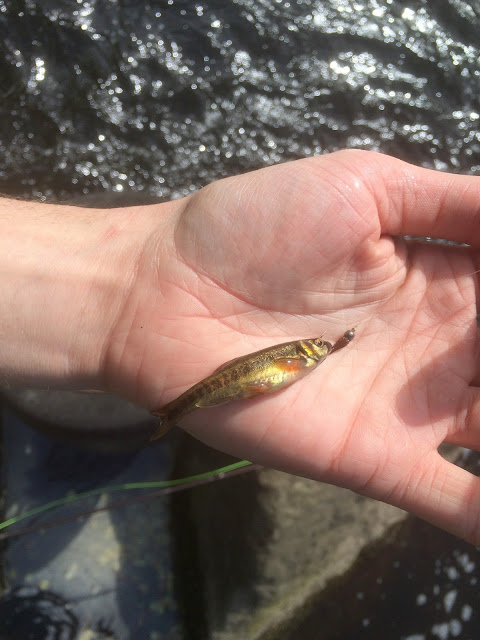 All in all 7 trout in difficult circumstances, an enjoyable day and a phone that still works. tried a few John Tyzack​ poses today too!