So it was a strange day, 4 hours sleep with the daughter being ill in the night i was strangely invigorated. the bleak weather the week had given us pondered on my thoughts as i checked the weather app. hmm not rained yet and may stay dry today. it was worth the hope. A cold wind blew but at 5pm i was out the door, wrapped up like it was a winters morning.

Not far down the hill some 5 minutes away the sun came pouring out the clouds, typical, best get in the water then to cool off. Now i knew the river would be quite high and the highest i'd have fished it but with no rain that day i knew it would be 'clearer'. Now you may remember last time i risked a new spot but decided against it, well today i was tired and stupid i went a more difficult route facing a sheer cliff, but i was set up with a nymph and dry duo and ready to fish by 5.30. 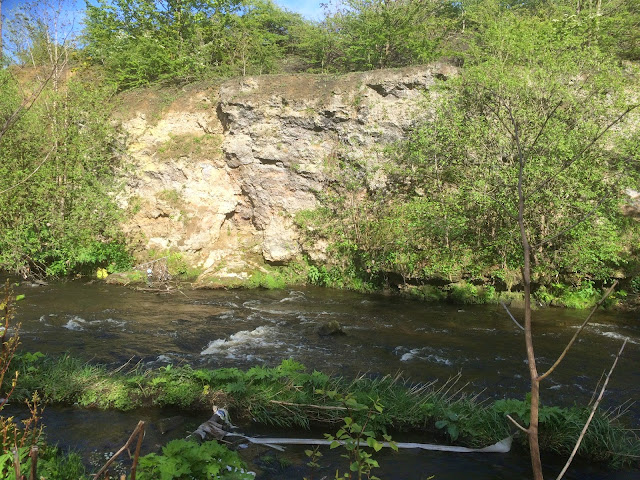 The water raged over huge rocks and the countless debris trapped, but i cast and snagged. too dangerous to retrieve i forced a snap, i cast again and snagged my line i'd just lost. miraculously the nymph snapped off both and i reclaimed both my drys. Annoyed i stuck on a PT tungsten bead solo and cast, running the channels. it was hard to judge depth as i hadnt been here before and the raging water made it difficult for me to see. i was on my 3rd cast when boom a snag. No! a fish! i pulled the trout out of the torrent and up towards my net, a single jump as i pulled him into my net. a nice size and a great set hook. Releasing him downstream i cast in the channel next to where the fish had just come from. Another hit! the white water forcing the fish under i let the fish swim itself out but it struggled, pulling it into the net i realized the line had wrapped round the fish in the torrent but the hook again was very well set! i fished one side of the water as didnt want to risk wading too much in fresh water at the speed it was flowing. 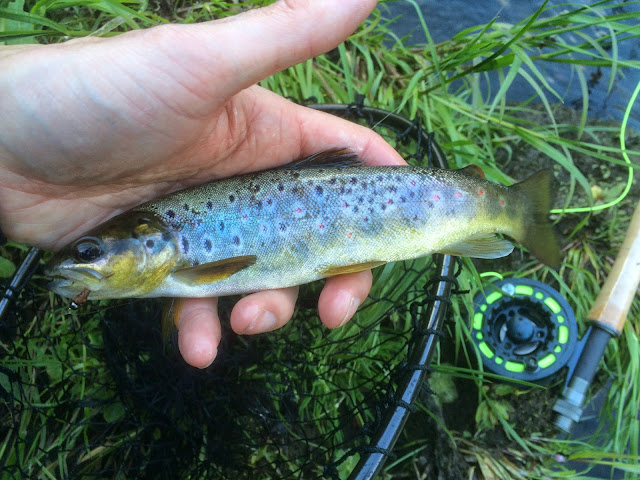 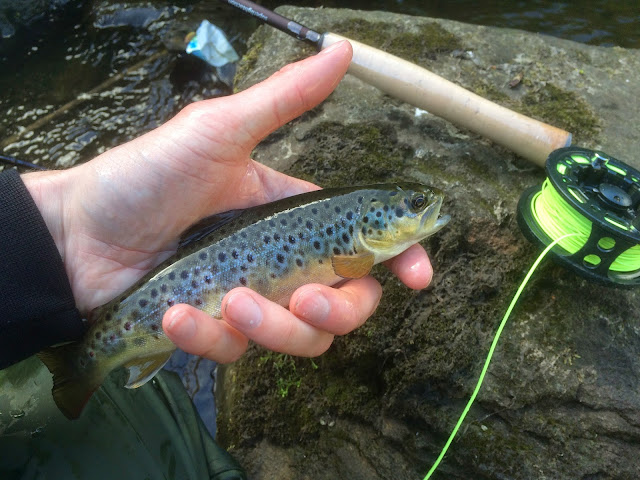 So after nothing else i worked my way back to where i usually fish. the water is only usually inches her but raging riffles had appeared on the usually dry bank. I cast around and felt a few takes until i hit into another trout, a lovely blue hue to his body. Working my way through these riffles i hooked another trout maybe 4-5 inches but one jump before the net and it was off. If it aint in the hand it don't count! I worked my way up and onto the usual place the riffles are. Nothing at all, well except the damn tree! lost my fly. so i decided to try a duo nymph, hell why not, i've had snags all day so lets double the chances. Wading through and across the raging drop which was very strong flowing i cast into the pool i caught a small trout last time. 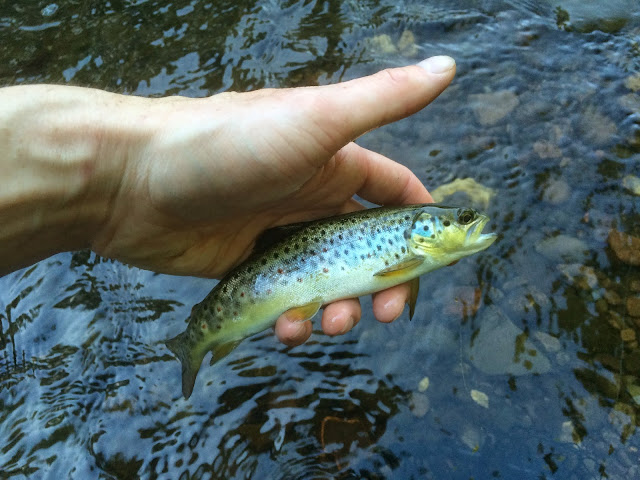 Instantly a huge hit, but a miss! dang it! i cast again, and another this time smaller. readying the net it slips off, dang it! the curse of the 3 trout. Now, my last 4 fishing trips have earned me 3 fish each time. So at this point i was thinking that was somehow this weird limit. i cast into the heavier flow and hit a snag again. wait. snags don't storm off downstream! I struck, holy hell, it jumped! a great trout! my biggest yet, i just had to land it. my rod bending as it used the heavy flow to race downstream towards the drop, thinking off the 8million snags i couldn't let it run over the edge, i pulled the line with my hand, it jumped in anger and dove down to the bottom, straight into a huge boulder, realizing my line could catch the rock and snap i gave slack enough for the trout to try to swim downstream again. it was a yoyo battle everytime i gained line it jumped ferociously trying to pull the hook, this trout was a jumper, after at least a dozen leaps of fury i learnt the pattern the fish took before it jumped, i stepped forward, just as it lept in the air, pulling the slack it fell just in front of me, after a lunge with the net it was in. Lifting him out and moving to a 'calmer' pool i laughed.

The trout was pure muscle, the fight had been fantastic, all the risks of losing the fish and the fight it put in as well and i'd won! trying to take a picture one handed was troublesome, especially after the hook came out in the net, thankfully i got the pictures and released him back. i usually release the fish caught her in the calm back eddy but it was a raging torrent so ended up releasing him in the shallower water were he could happily swim to his own area. 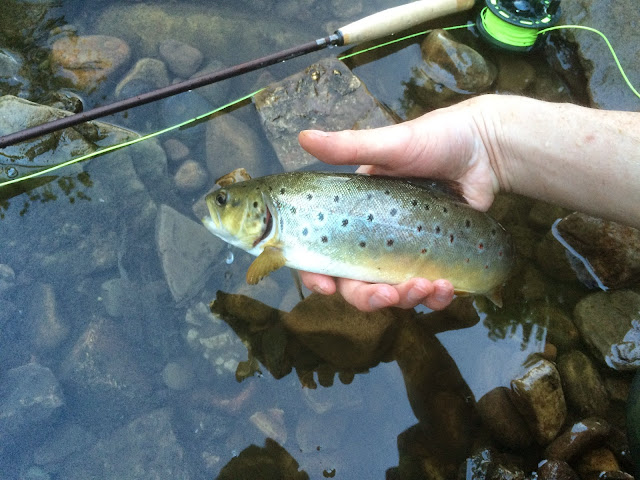 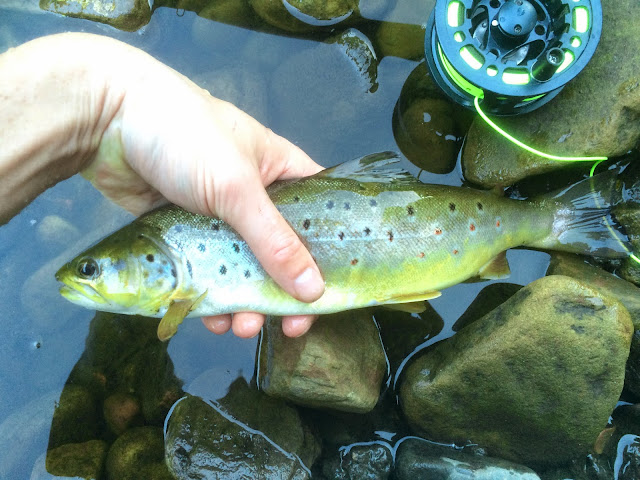 i worked my way up stream to the next spot, but nothing showed interest and i decided to head home. What a day it had been, and what fish they had been too. a dreadful start with the snags but perseverance paid off and i was duly rewarded.