Fly Fishing - Meeting the Lady of the Stream - Day 34

The title suggests i ran into another woman doing voodoo in the river, however this is a very much different and special story. I had made plans with Mike to go fishing on a river were Grayling are meant to live and at early doors we was off. Upon arrival we had a scout around and found it fairly easy to spot the Brown Trout swimming below, popping out for nymphs. Gearing up we trekked off downstream and set up under a bridge.

Mike had given me some info on Grayling. They like bling and colour. so i popped on a peasant tail with a gold bead, purple collar and a red cotton tail, and to cover the natural food i popped on the BWO Flyph for good measure. Mike would lead as he knew the water better and without a wading stick it was good to see someone go first. I nymphed as i usually would, working the lanes when i got a hit and struck into a fish. It had some pull on it but after a short fight i got it to the top only to see a long dorsal fin. It was a Grayling! Trying to not let excitement get the best of me i kept my cool and bagged him. Beautiful little fish, didn't want to show its dorsal fin so i didn't force it and i released it happily back into the river. 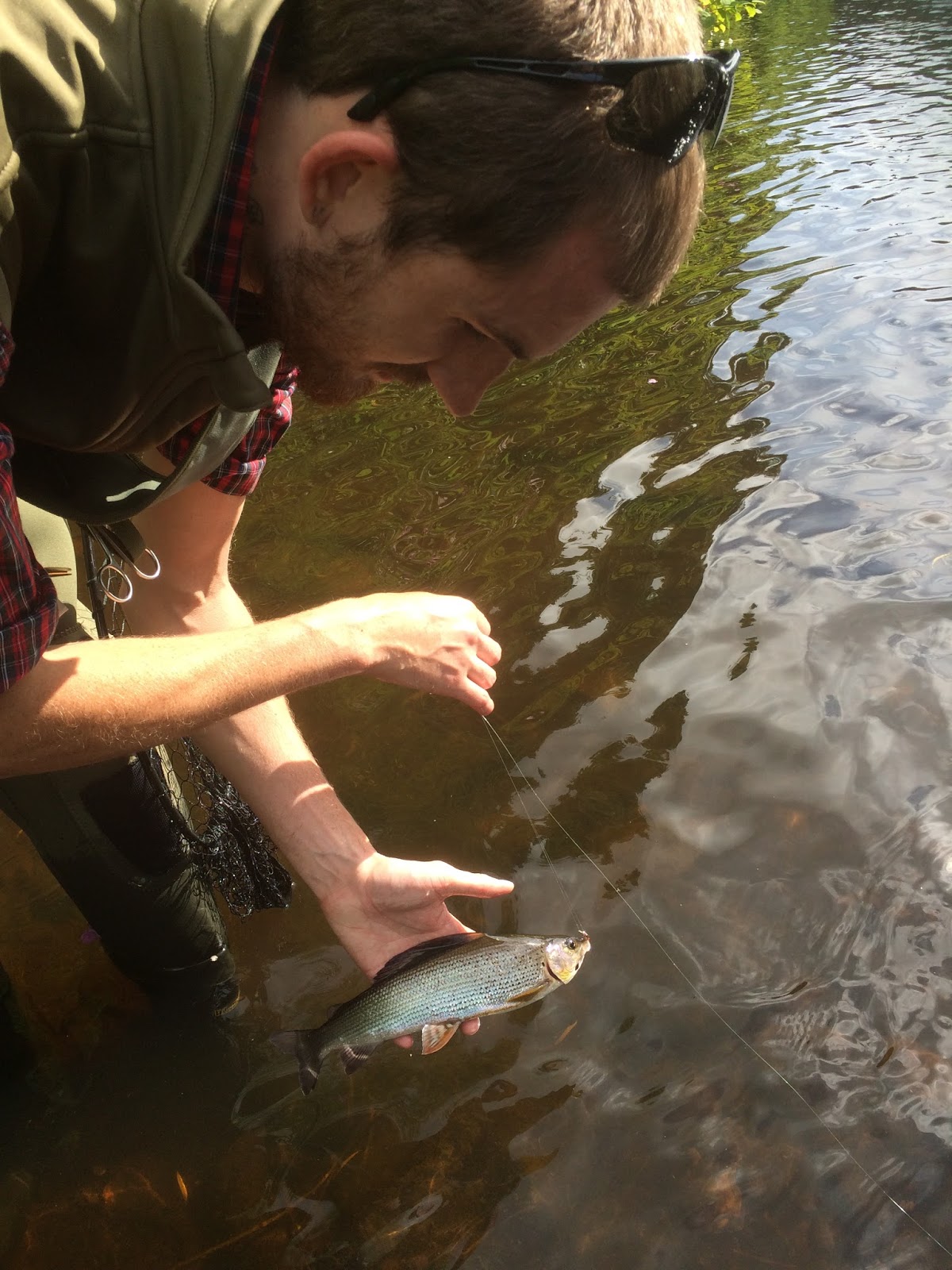 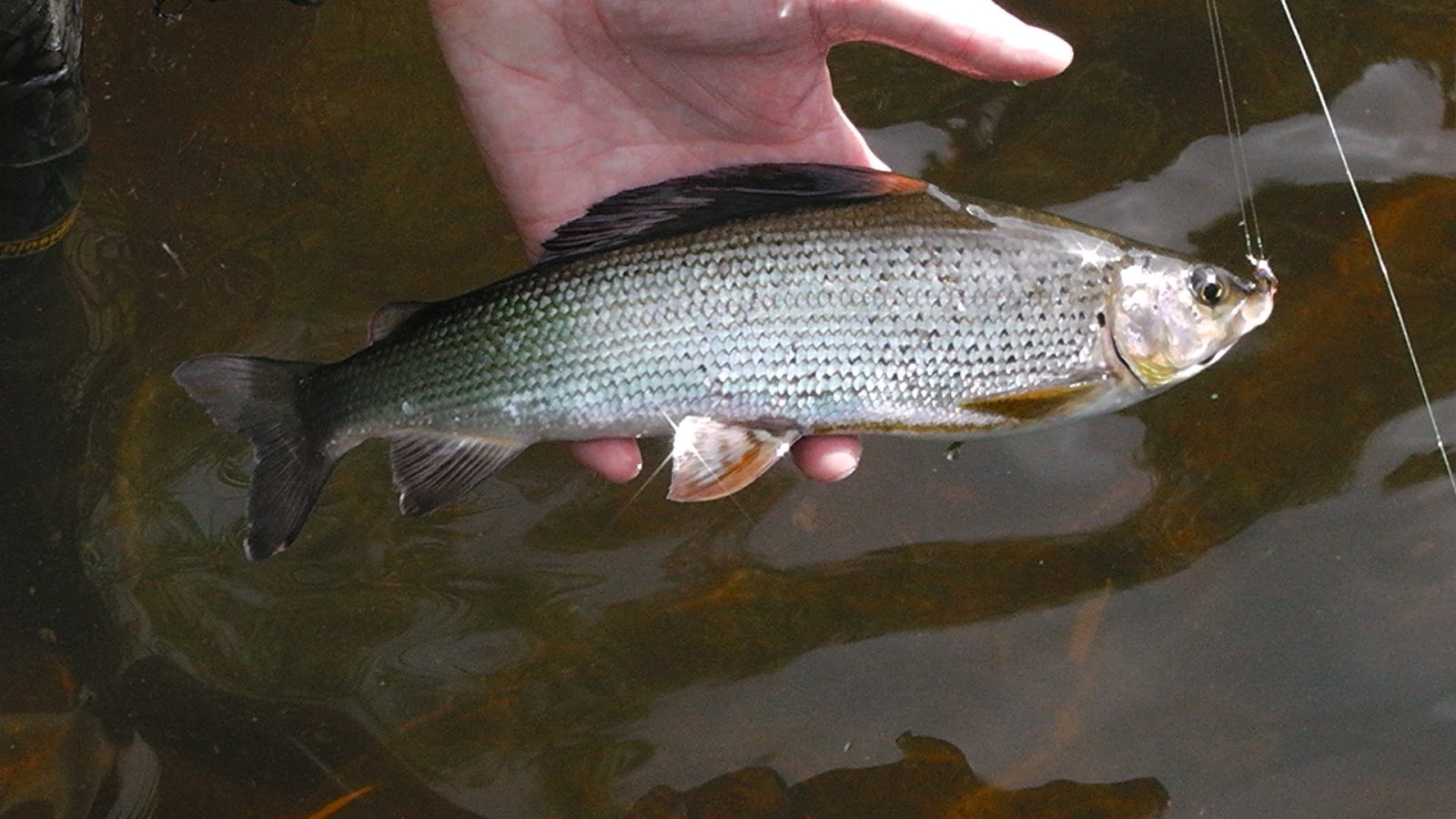 Worked our way upstream and Mike bagged a small trout before we jumped out and walked up a little bit.  Seeing a couple of fish rise we jumped in and fish there. I saw a flash of a decent trout next to my nymphs and i stupidly struck, reacting at the fish rather than the take. Further up i managed a tiny trout which swam straight towards me and plopped straight off as i picked it up.

Now the next bit was somewhat surreal. There was a a fast riffly run, not deep but just enough and i snagged, so pulling from the snag i cast and snagged again. Stepped forward to remove it to see my snag had moved. Slightly confused my eyes adjusted and realised i'd somehow snagged a Grayling in it's dorsal fin. It was literally just sat there. It came to as i tried to pull it across. Very difficult considering i was hooked in it's midriff. IT was bigger than the first and pulling a flat object through water is tough, if it had taken then nymph i would of been able to turn it's head. It soon figured out what was happening when it realised Mike had a net and it bolted downstream and popped the hook. We laughed as we hadn't caught it how we wanted to so it didn't count but would of been nice to see.

As we headed upstream we kept running into trout swimming around us as we waded. Mike spotted a fish rise up ahead and within one or two casts it struck hard and he bagged it. Unfortunately it didn't stay around long enough for a picture after the hook was out. It was coming up to dinner time so we was fishing the last run when i got a big hit and with the clarity of the water being clear despite it's murky color i could see it was a good trout. Back and forth i turned it not letting it get any powerful runs and it was in the net. It was a very nice trout and a possible PB after measuring it up it came to be 1inch above my PB at 16inches. I'd now caught my first Grayling and a new PB. 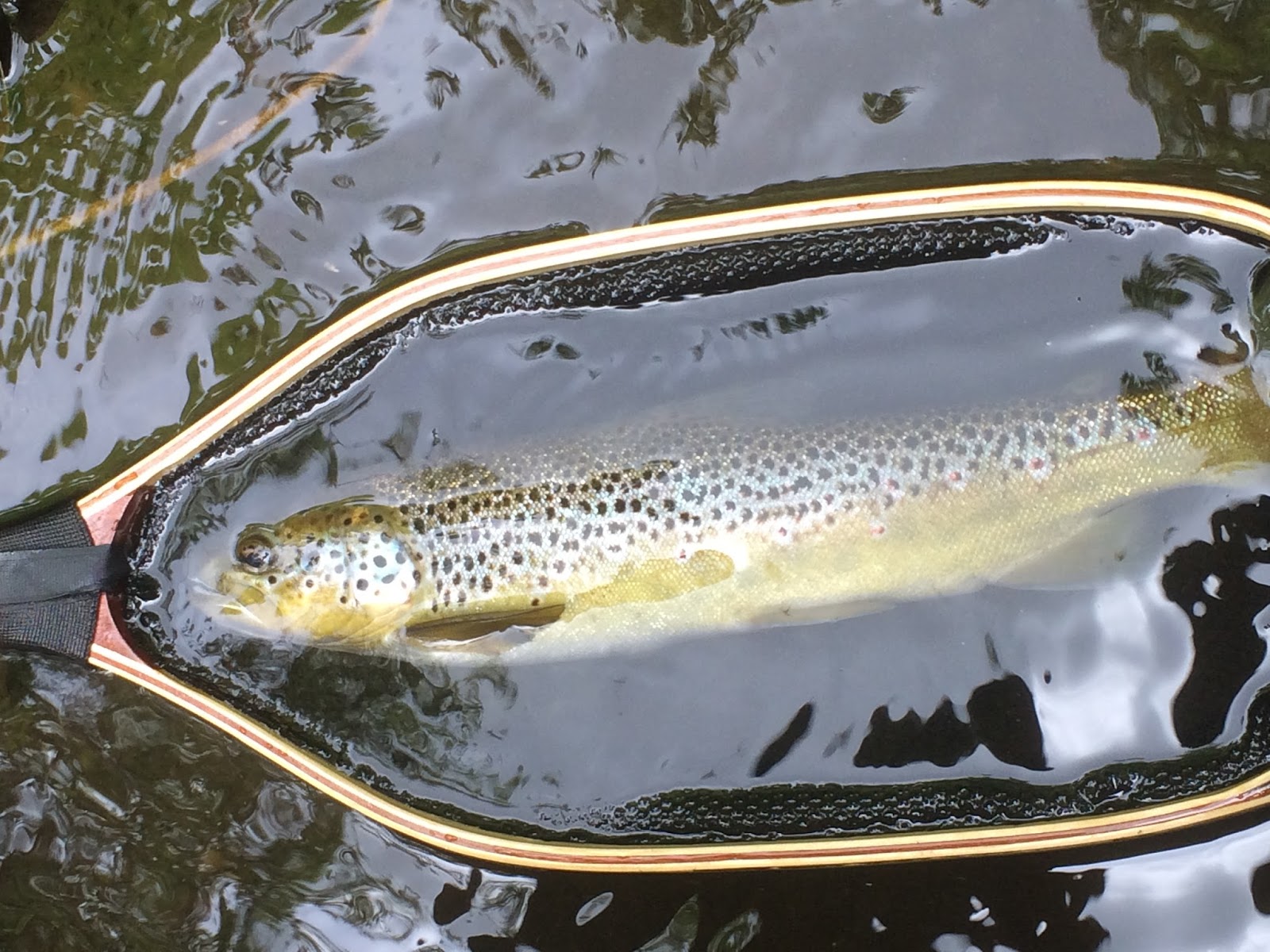 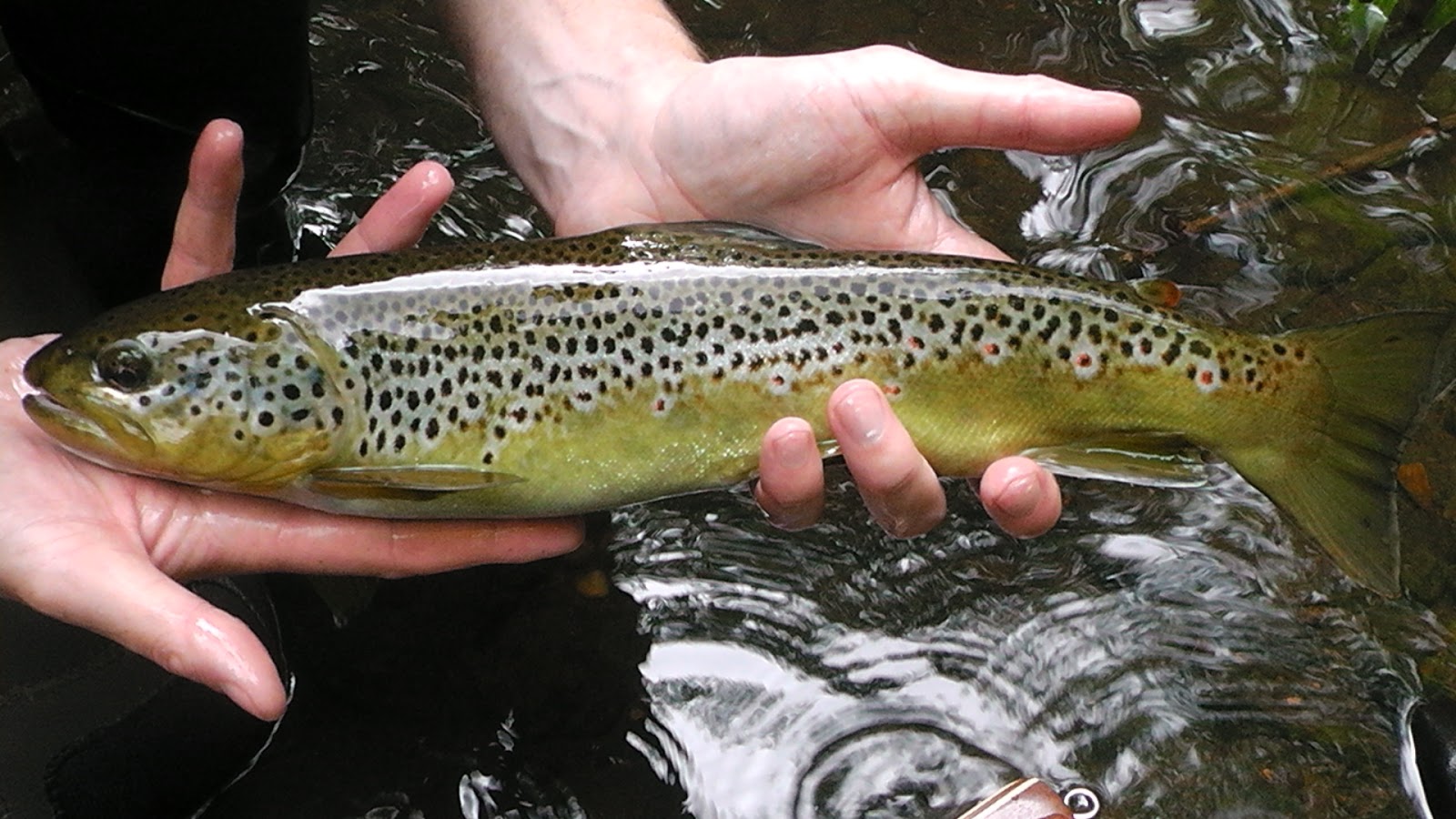 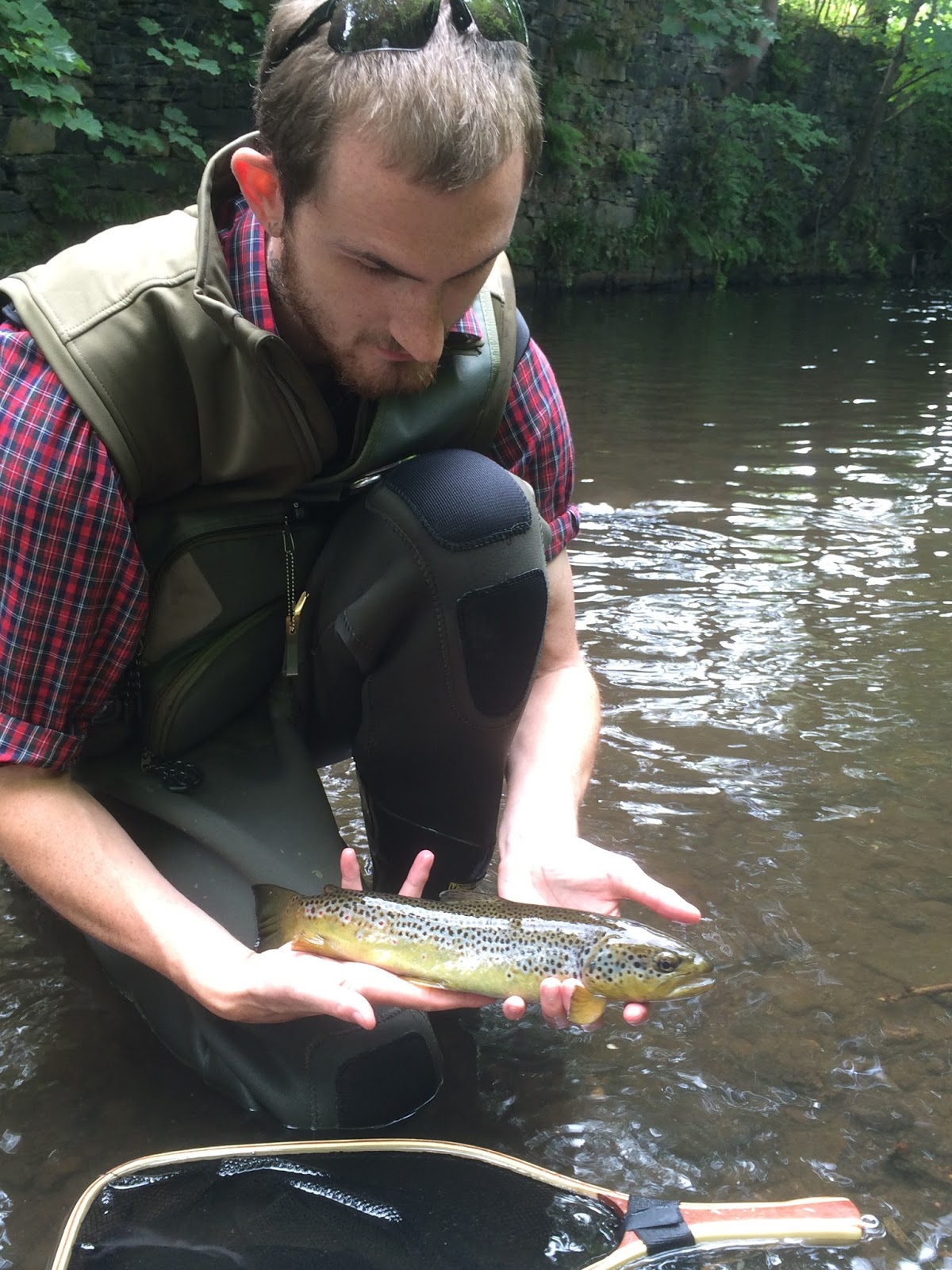 We went back to the car and had dinner before we moved off to our next section. The water level was down everywhere so we knew it would be tough but we was pleased so far. After Mike missed a few fish in a run he let me have a pop at it. With a klink and dink method now on with 2 nymphs the dry went under and i struck, back and forth i took it as it tried to stay deep. A dark little trout but it added confidence to my new set up so i refished the run i'd just done. 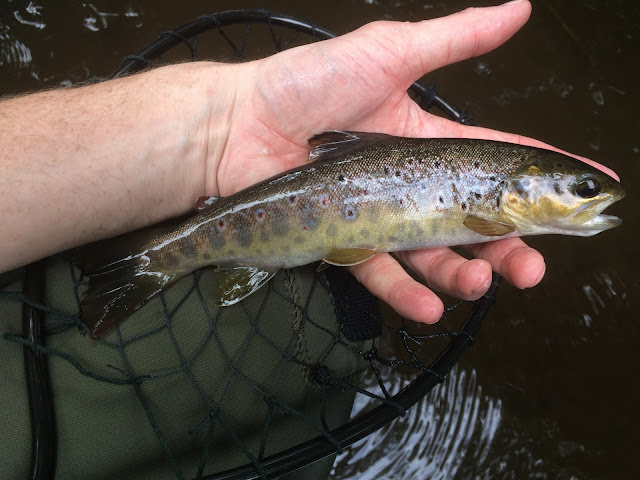 It wasn't long after i had learnt to bounce my nymphs off the wall to keep the close that i was in and this trout wasn't staying around. It tore off upstream as far as i would allow it before i turned it's head round. it wasn't finished though after swimming deep it came up at my feet almost giving it slack line but i was quick to pull it tight with my left hand. After a few turns i noticed the fish had started to swim funny and we contemplated if it had been foul hooked or the line had wrapped round and it turned out to be the latter.  That was 15inch an equal to my original record.

It was an amazing days fishing,despite the water level being down knowing we would of had alot more didn;t dishearten us. it just gave us incentive to go again in the rainny months. 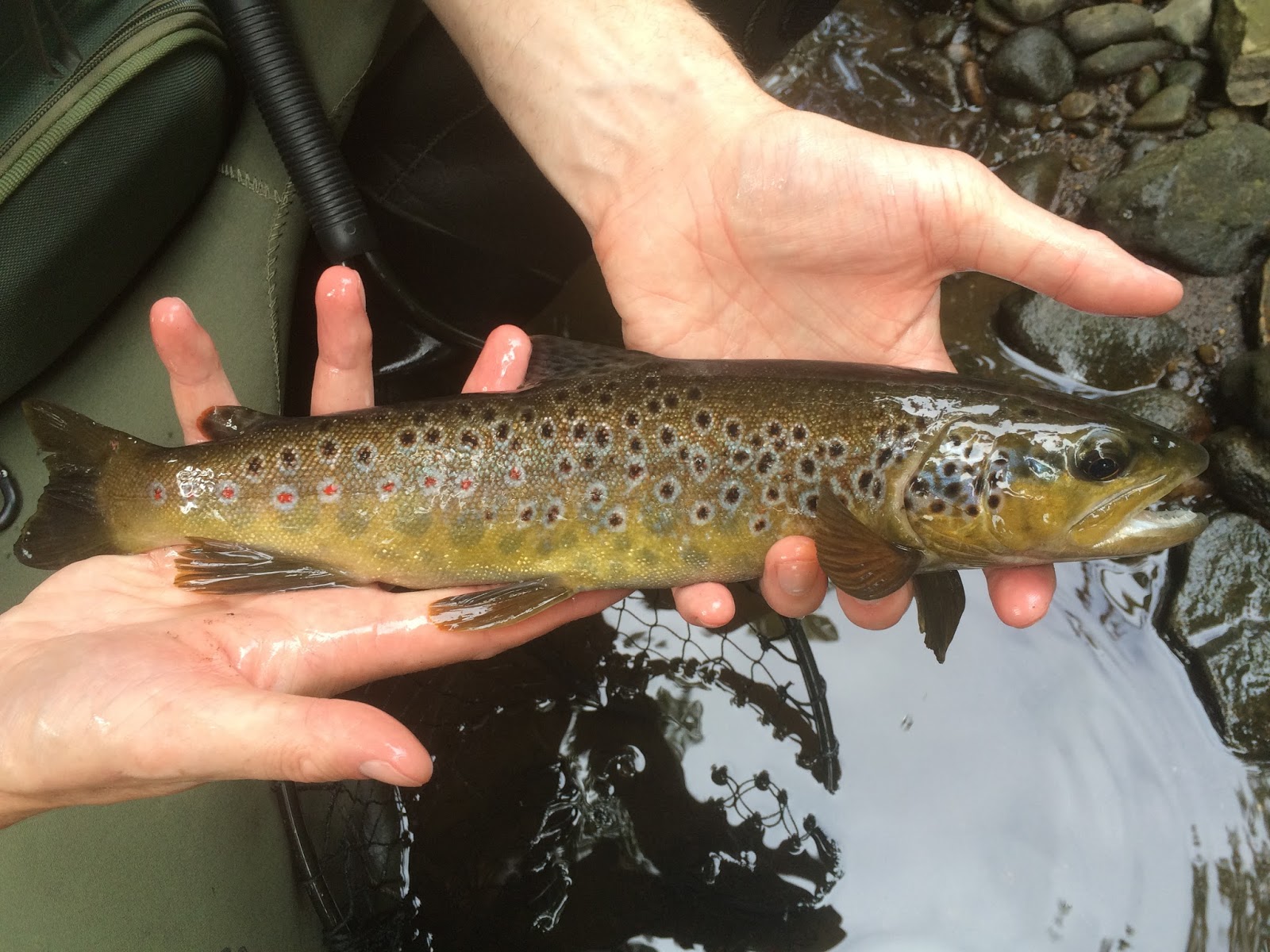