Had arranged to fish this week with Mark but it took some serious weather watcher, river level charting etc to ensure the conditions would be right. why? because we was hunting Grayling on a river we hadn't fished.  We arrived at about 9 with a mist hanging above the water and after a walk down the river we picked our getting in spot and rigged up. i choose a hairy jig with the beadhead i caught my first grayling on while Mark selected similar options. 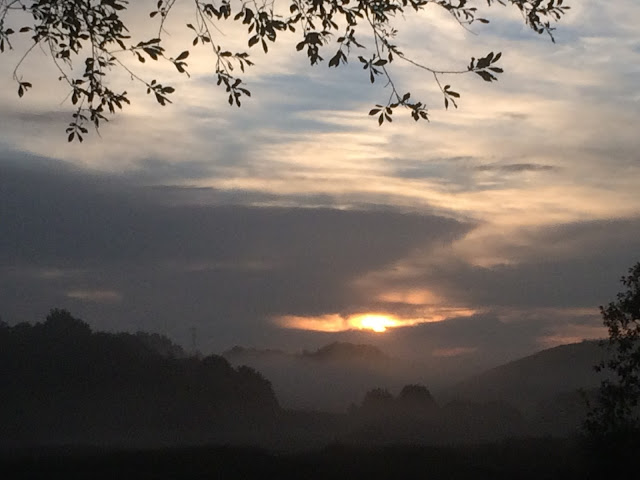 It wasn't long till i was into my first grayling, strangely it didn't fight to hard, but once in the net it was constantly freaking out. This would be how all the Grayling would act, little fight, plenty of net action and to top it off a reluctance to go back. happily sat swimming round our boots and needing a gentle nudge to get them a safe distance away from us. 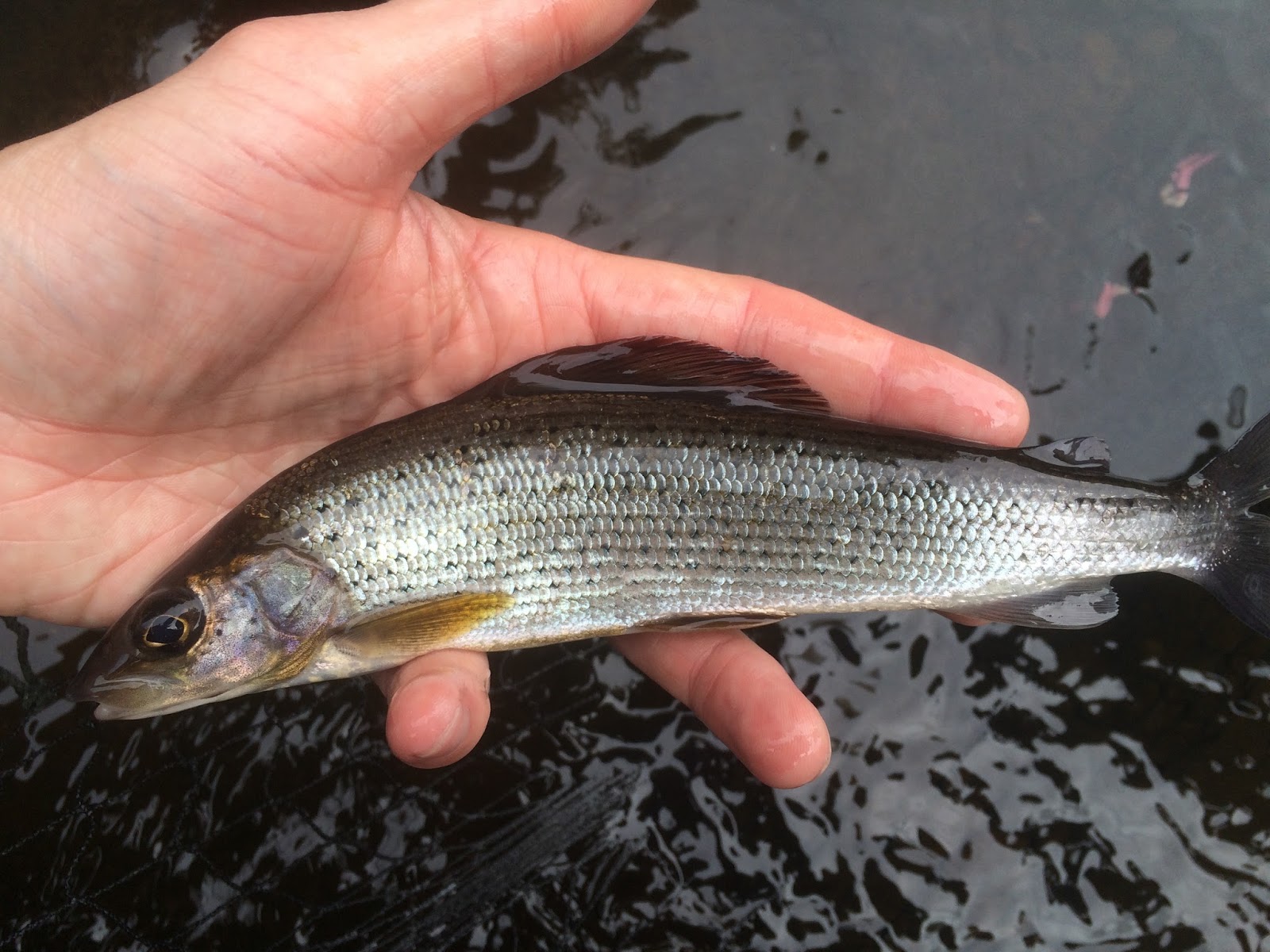 Wasn't long till Mark was in but his Grayling beelined for him with a huge jump causing slack and popping the hook out.  We thought it was a good sign, however this trip was a tale of two halves.

10 minutes later i was into a bigger Grayling, again very little fight but really hated it's picture taken, and then again not long after that an even bigger Grayling, with hurried pictures due to the amount of fight they were giving i wasn't given half a chance for brilliant pictures. But now with 3 fish and Marks fishing gone quiet we started to question what was different. Flies! so we changed his flies and continued. 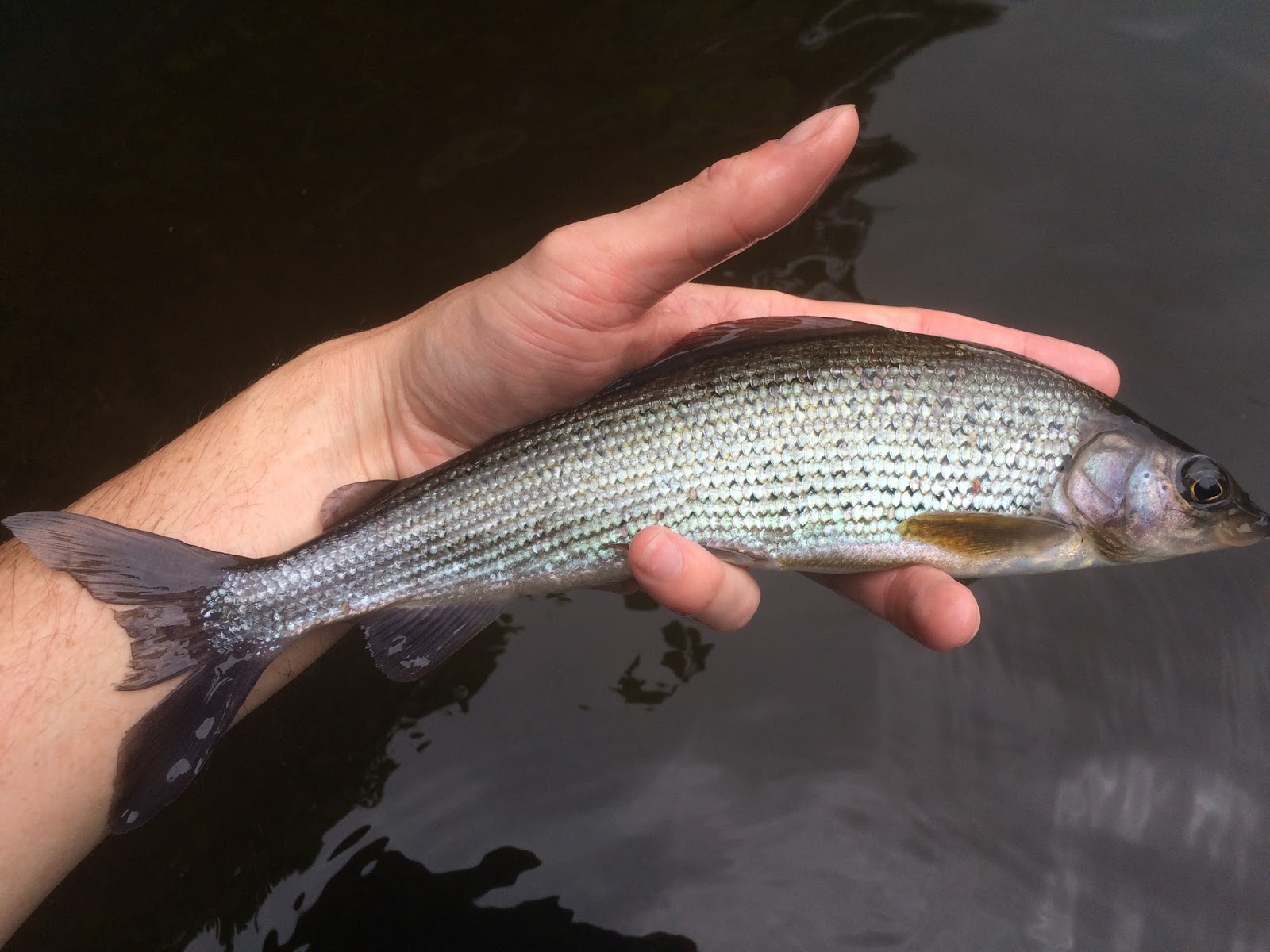 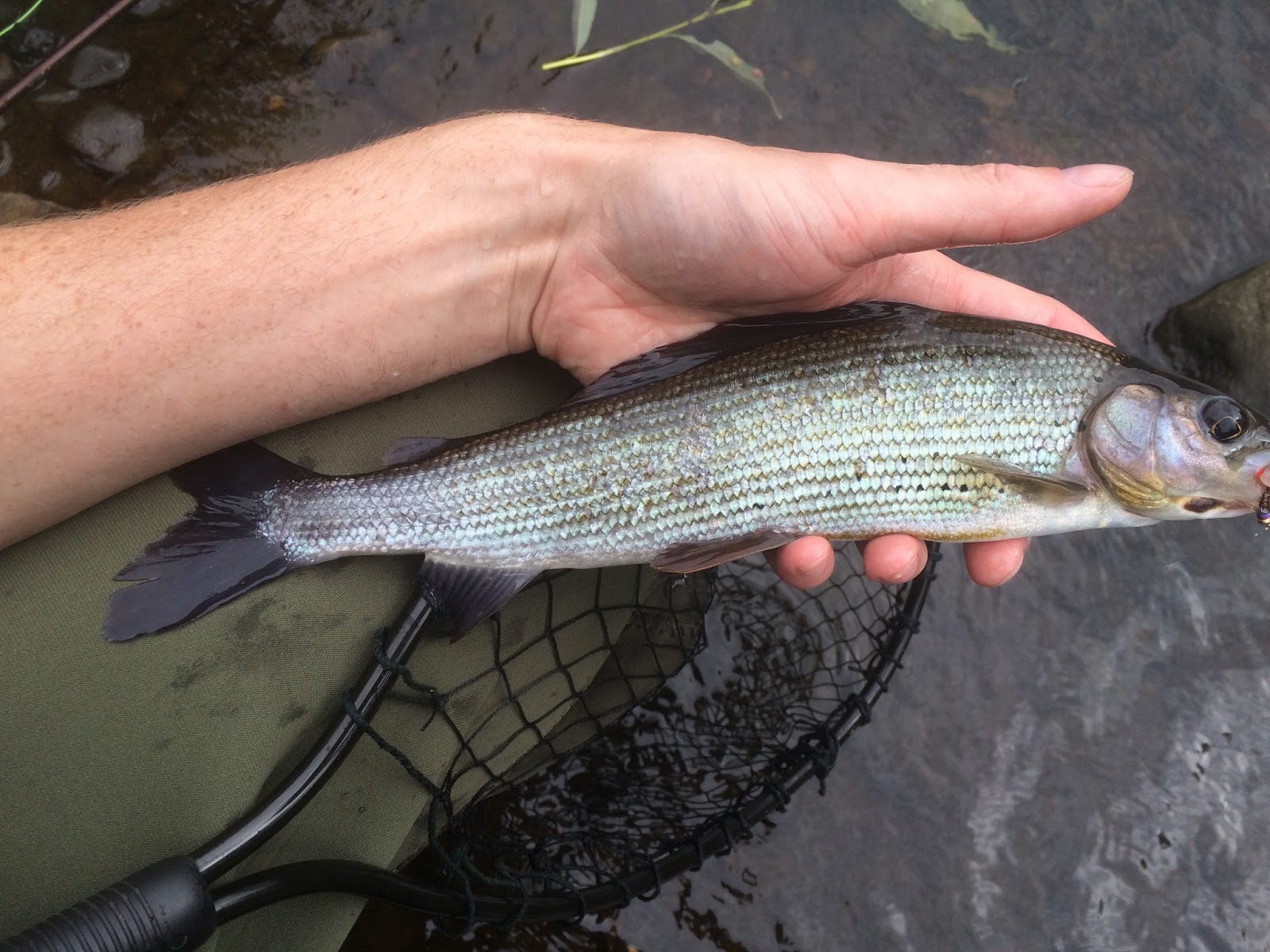 I was into a 4th Grayling and lost a decent one due to a light strike with the barbless.  Then things got interesting i got a hit and struck, the fish i had one bent my rod right over as it swam hard right, turned as it hit the shallows and swam straight off downstream, as it dragged line out the hook pinged out the fishes mouth at such a force that it left a ball of tangled fly line and tippet around my rod. That bad i rerigged my set up but used the same flies. 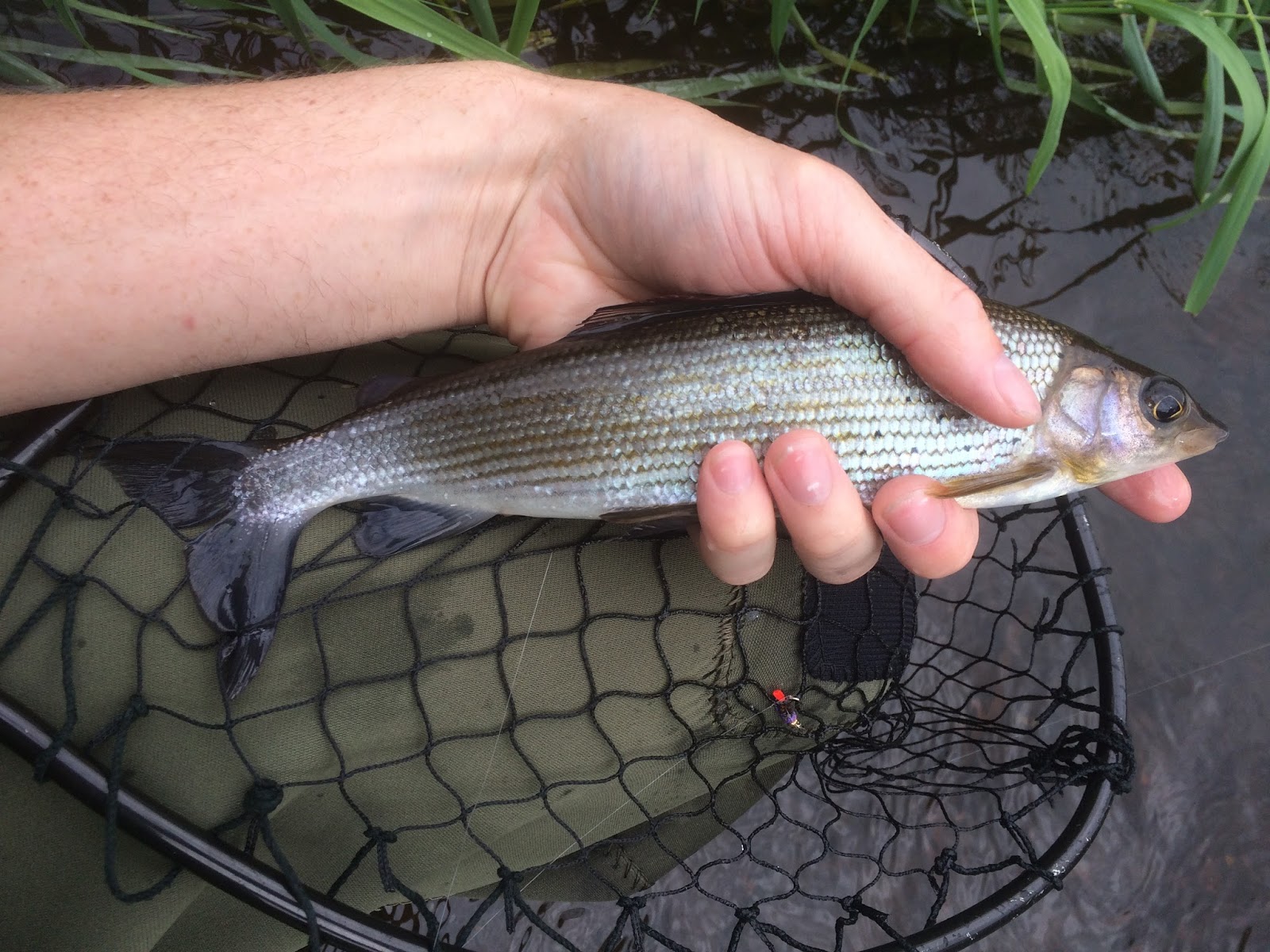 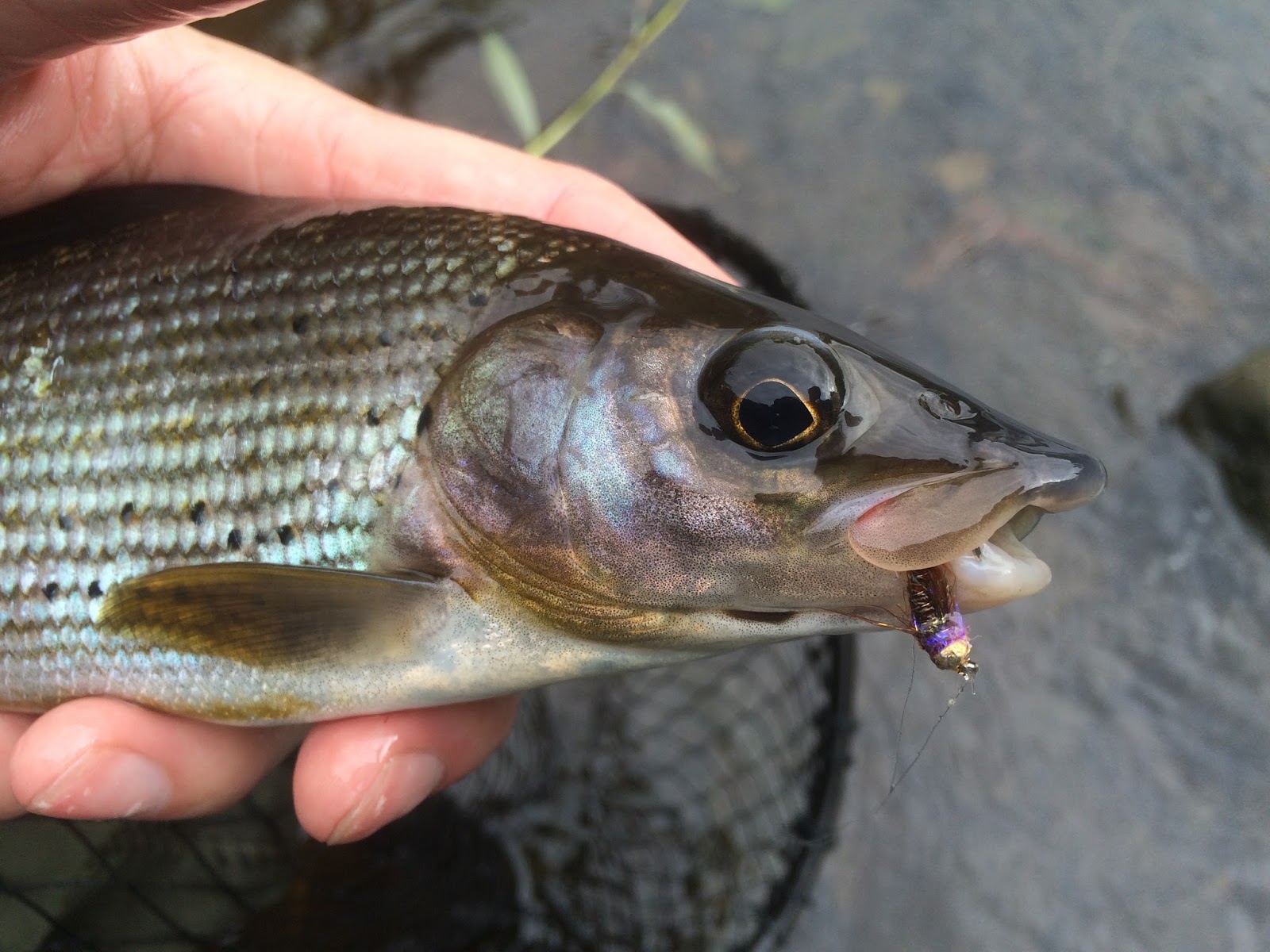 2 more trout later, and we was having a good chat. At this point i stopped fishing, trying to figure out the mystery around Marks 'blank'. Stripping everything back down indicator off, new flies and a longer tippet i let Mark lead to see if that was the problem also! I let my line drift downstream as i watched only for my indicator to twitch and i struck into a fish. Turned out it was foul hooked in the corner of its tail and despite being bardless hooks pulling a fish backwards upstream i managed to land it. 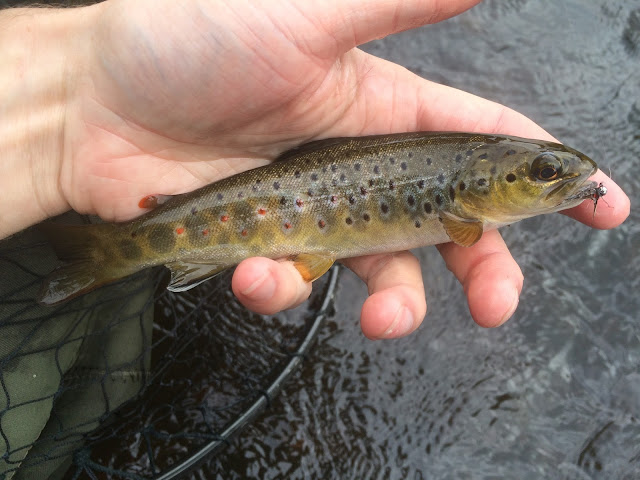 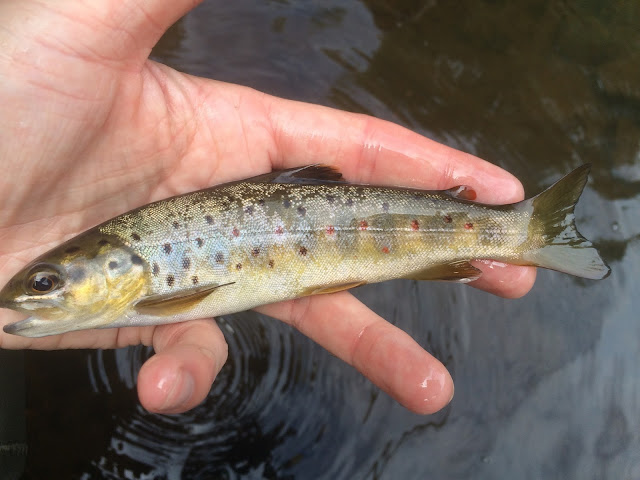 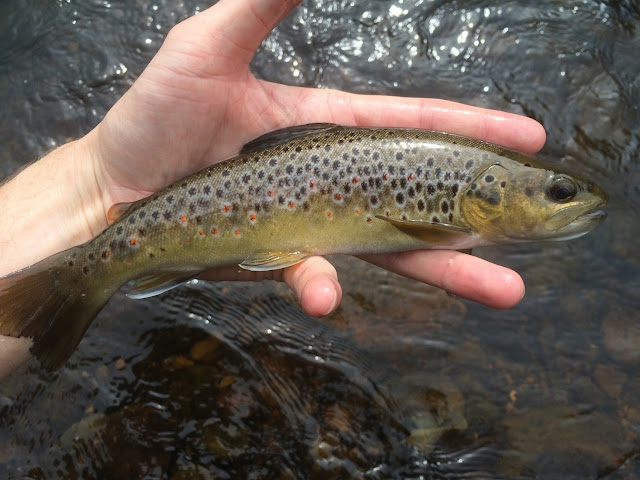 Why was i still catching? Then 5 minutes later in a shallow riffle i got a huge hit. Swimming in the current i tried to pull the trout out but it turned and went downstream, having to hold the rod with my left hand to navigate a tree i kept the line tight and brought it back above me so i could allow to drift into the net. It was a nice trout 14 inches but very fat, huge tail on it. 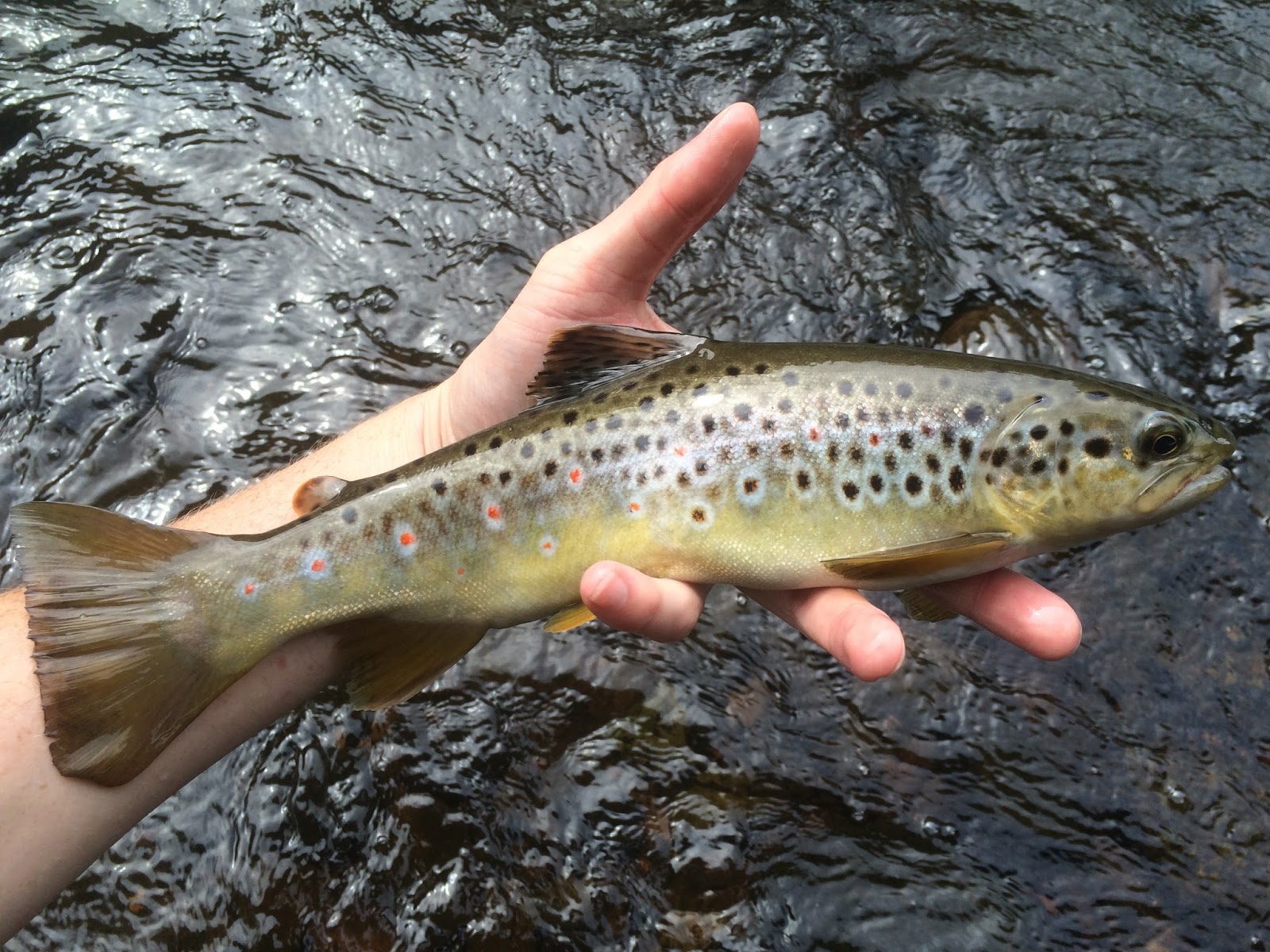 Caught up with Mark after i almost fell in on the slippy bottom and i decided to literally strip it all down to a blank. Giving him 6ft of my new hardys line as well. We headed into a very slow deep section which had enough current on one bank to carry a nymph but we quickly became amused by tens maybe hundreds in total of Grayling rising all around us literally within arms reach, some were trying to eat Marks fly line! i managed a trout and i was fishing fairly close to Mark as he lost a second fish adding to his frustration. I cast a little to close to his line so pulled out and waited, rod over the shoulder until i was free to cast, as i cast i felt a pull and in disbelief found a Grayling on my nymph! Who said presentation means everything? 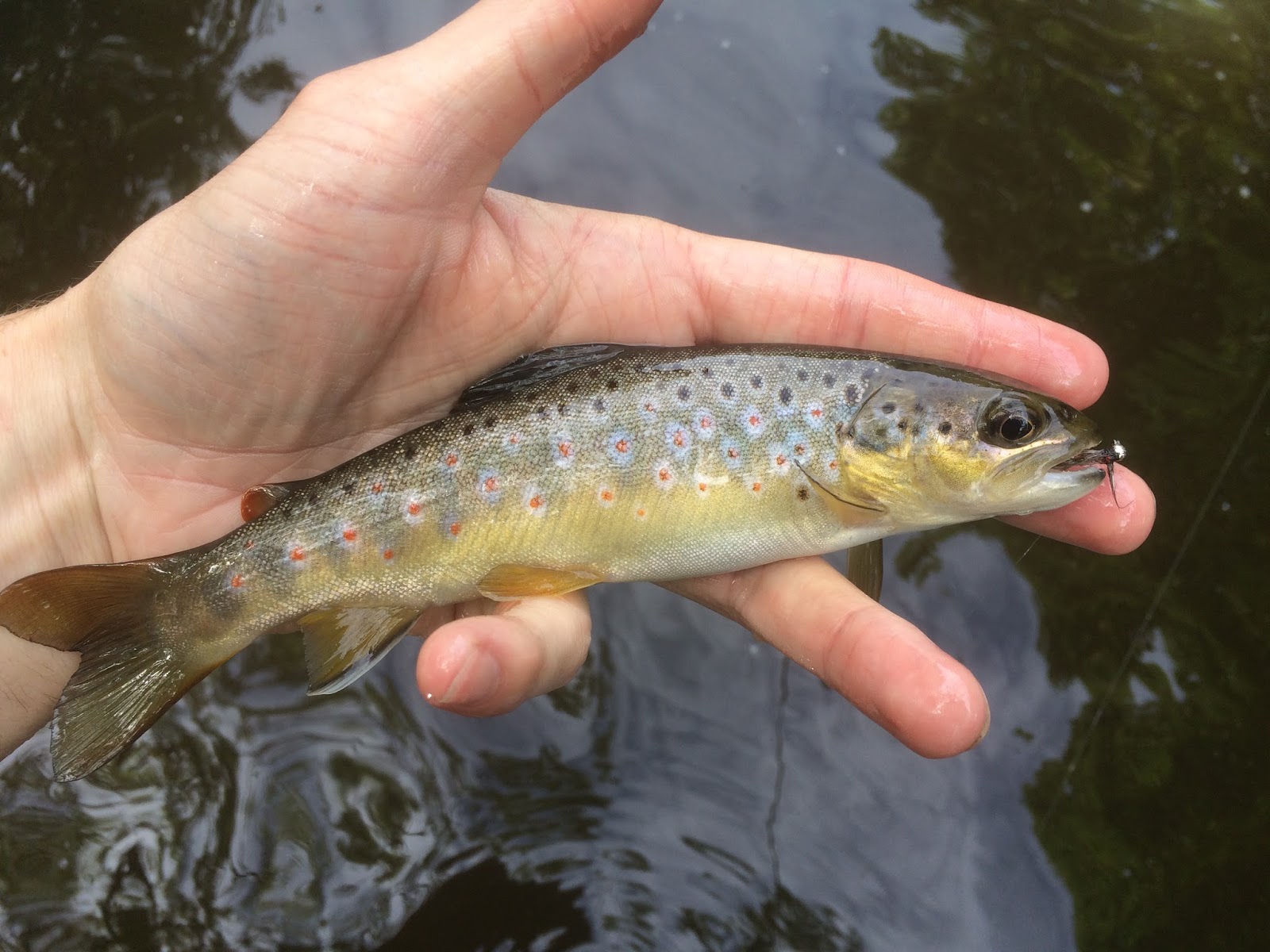 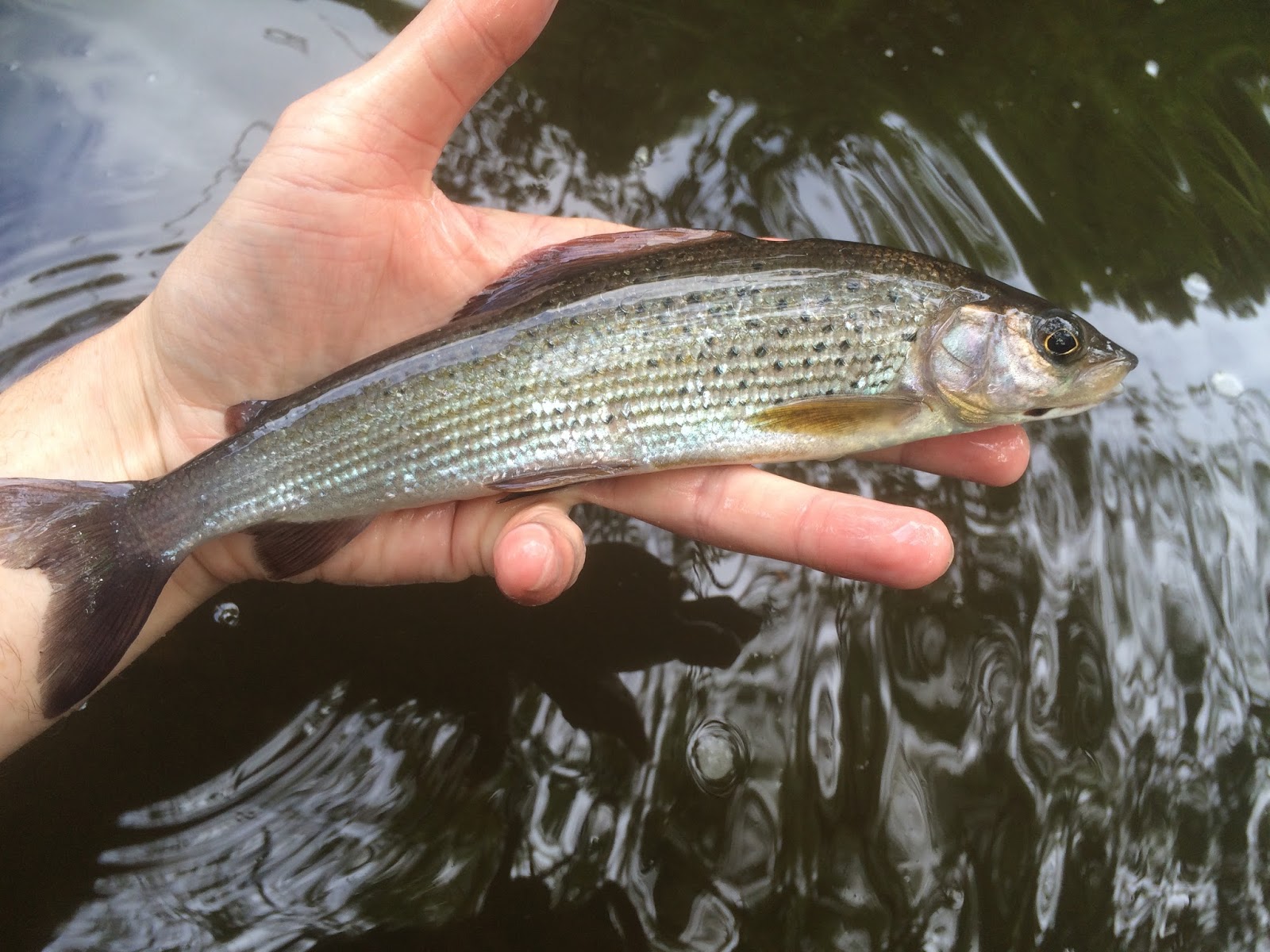 Mark lost another Grayling as we headed upto a well overgrown run and Mark finally came good. 3 fish, 2 of them Grayling and a bonny trout in the space of 5-10 minutes.  Was good for Mark to break his duck and also bag his first ever Grayling. We actually both caught at the same time. Mine however a small trout. 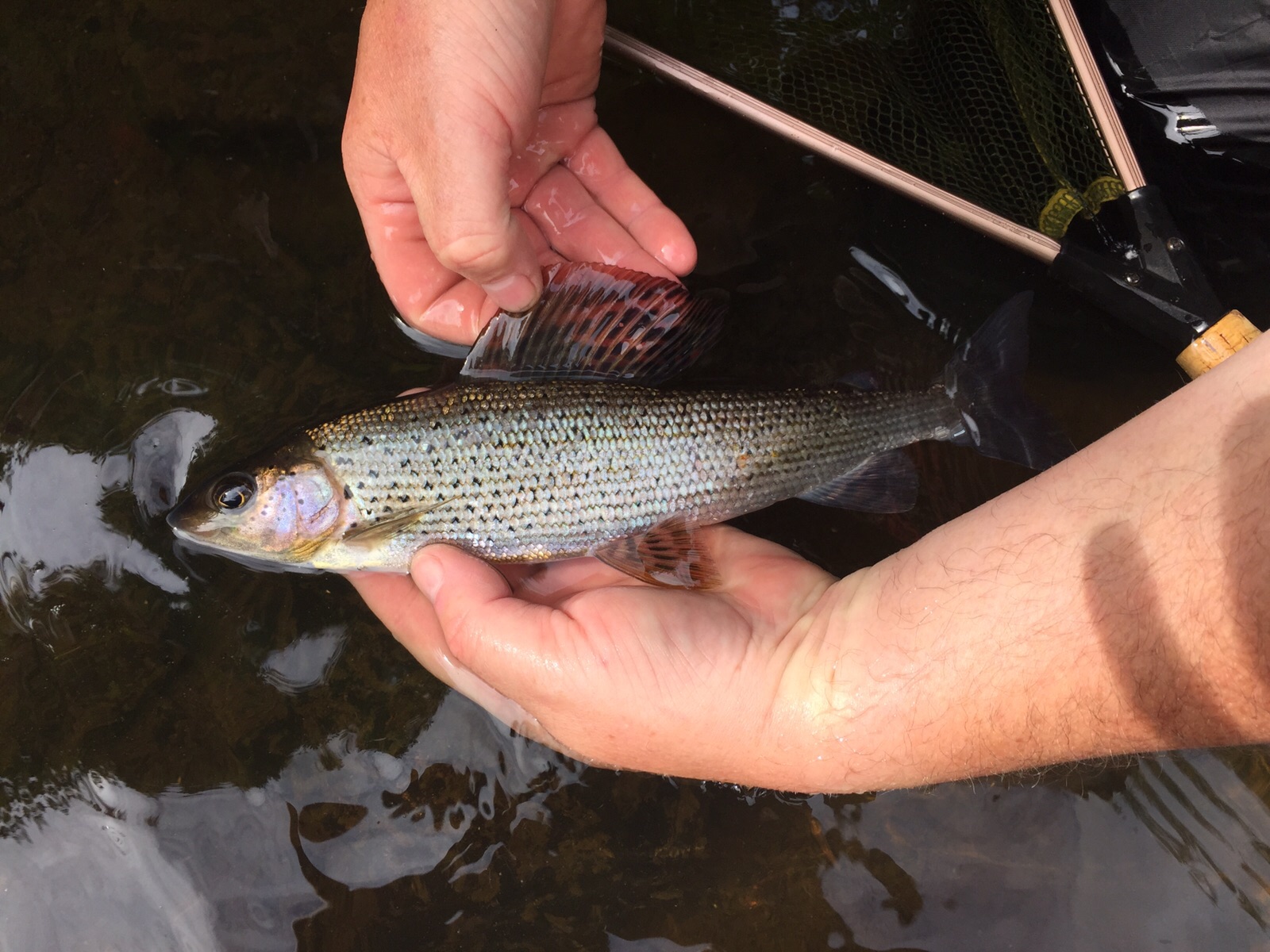 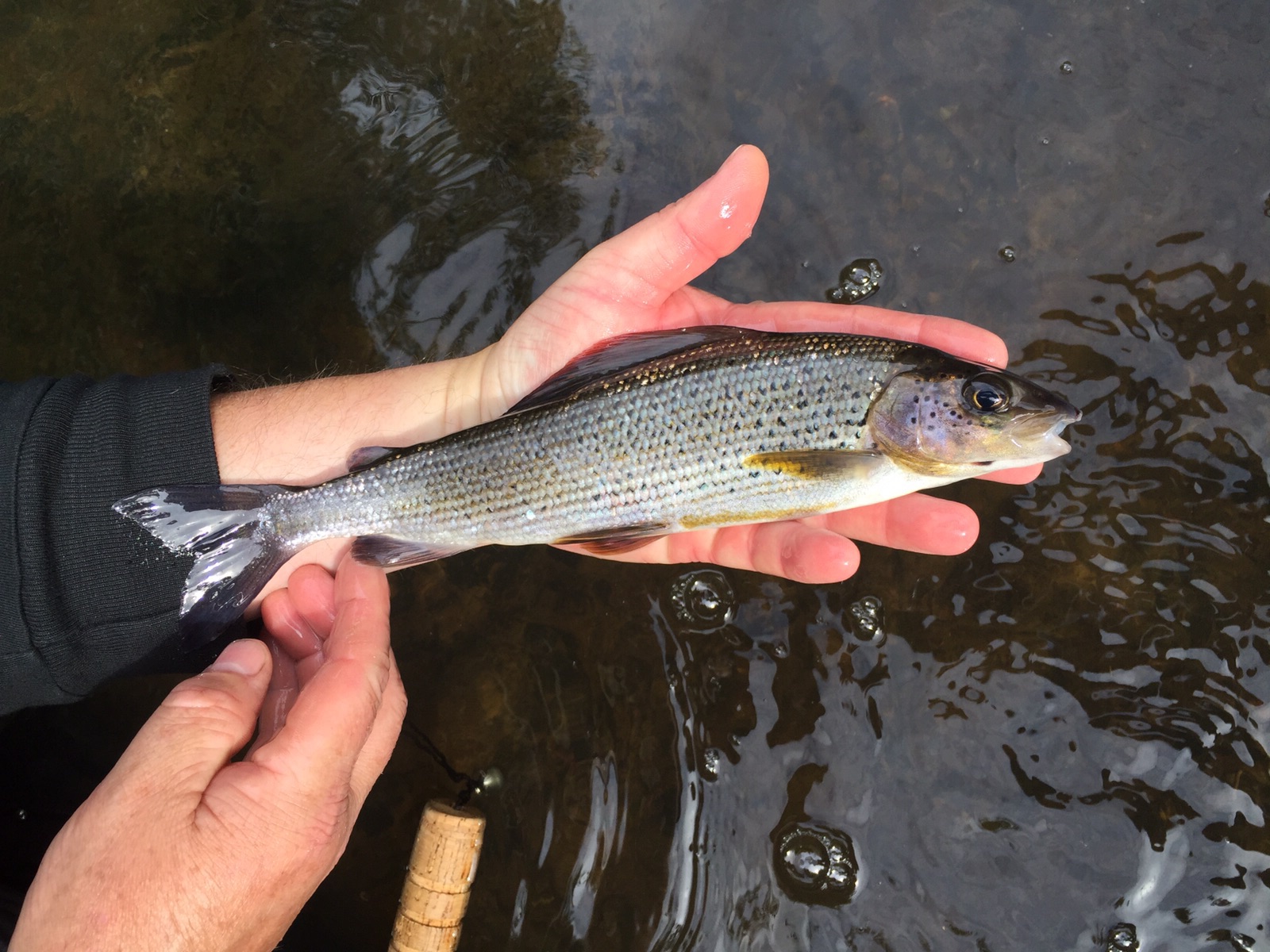 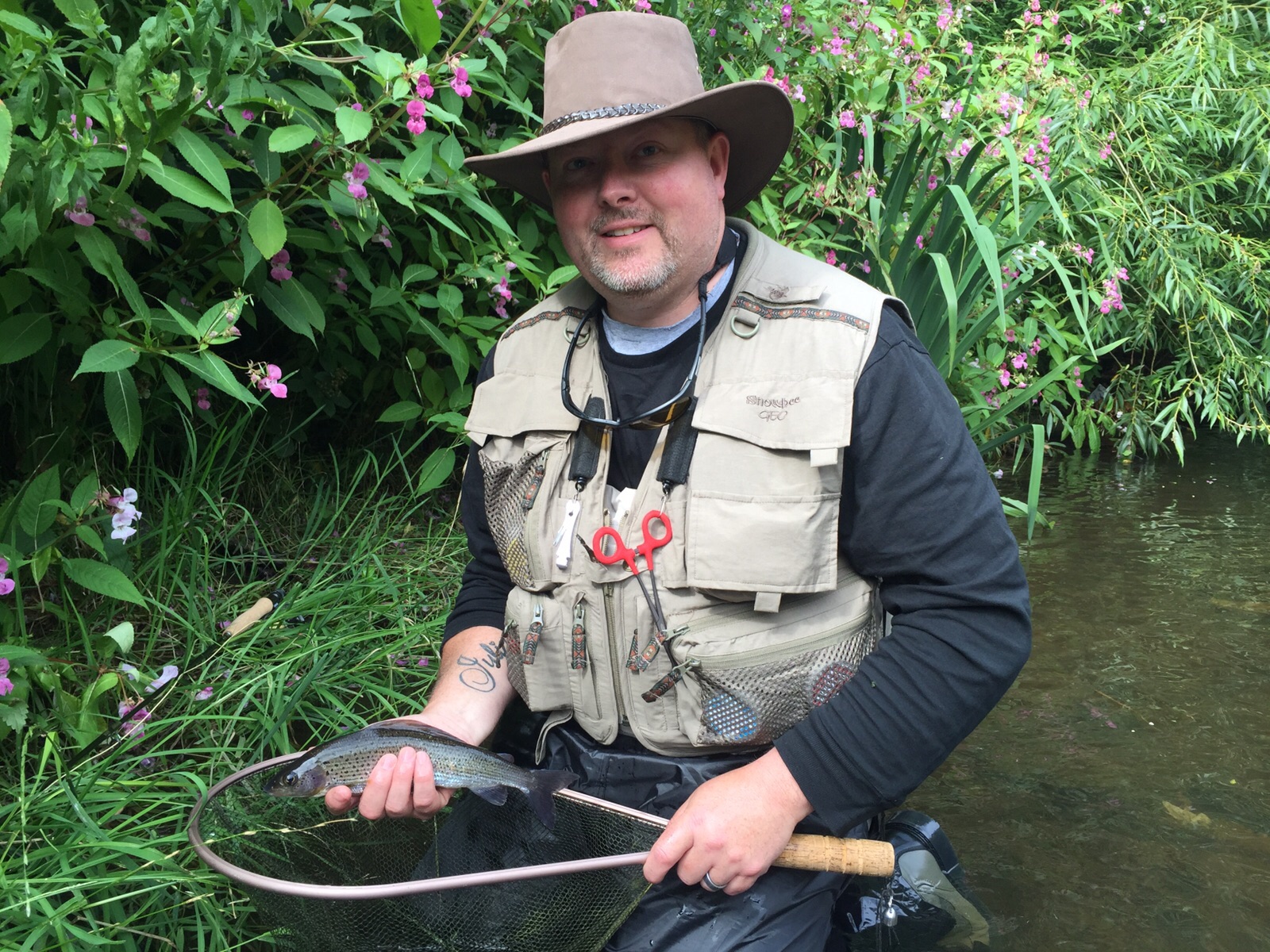 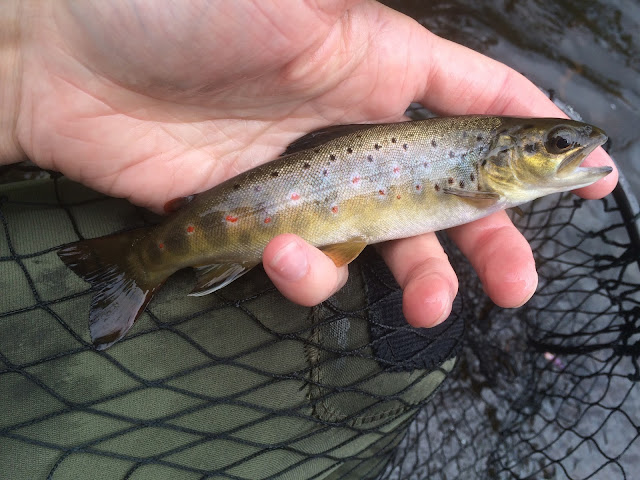 With time against us we fished the odd run from this point. I lost a big Grayling and had some nice hits. A small trout dropped off as i went into land and i managed another small trout near the end.

It was a great day and had plenty of surreal moments. Look forward to embracing this water again! 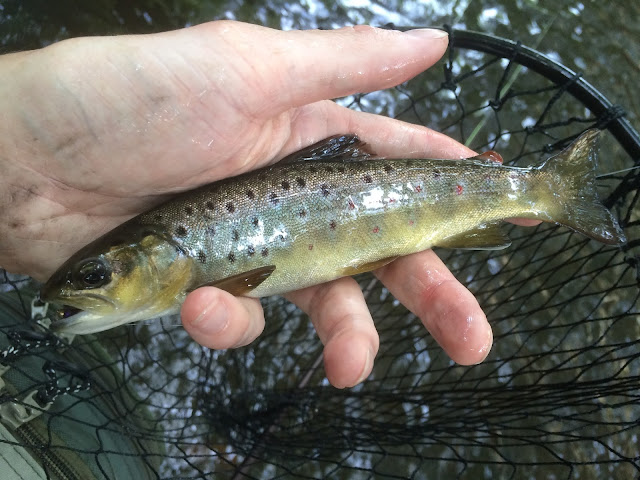