It was a unplanned days fishing today, with rain forecast all week i was surprised to see it clear so with no jobs to do i was onto Mark to see if he was up for a stab for a couple of hours. Thankfully he was and we met up and walked down to the river.

We fished the usual spots but with barely any sign of fish we was a little stumped. It was drizzling at this point but nothing major and my duo nymph and Marks single nymph were not tempting anything.  We was half way round and in the section were trees are a menace. I quote Mark 'I hate this section'. They are awful especially as if you snag and manage to pull out of it, or even ping a hook off a fish it will go straight into the trees above.

Now i'd changed to a duo dry earlier as i seen a single fish rise once but in this riffly section i took off the bottom dry and stuck a nymph on. One i hadn't used before either. So with the klinkhammer a foot above the nymph and in fast moving water i really didn't expect too much. I was wrong, i was soon in and had a tricky little fight with a trout, my rod got stuck in the tree at one point which had me worried for a second. I moved up to the slow run where the fish rise but got nothing. Mark changed to the same set up of a nymph below a dry and about 5 minutes later he was in. On the dry! Finally tricked one of them! Wasn't a big trout but we expected that as there is alot of trout here so they'll greatly vary in size. 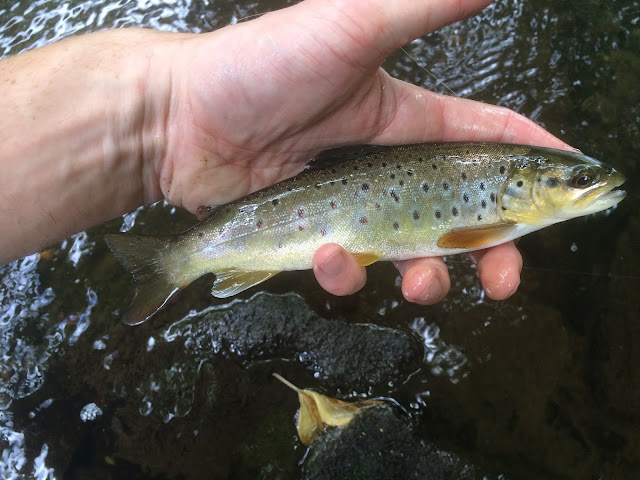 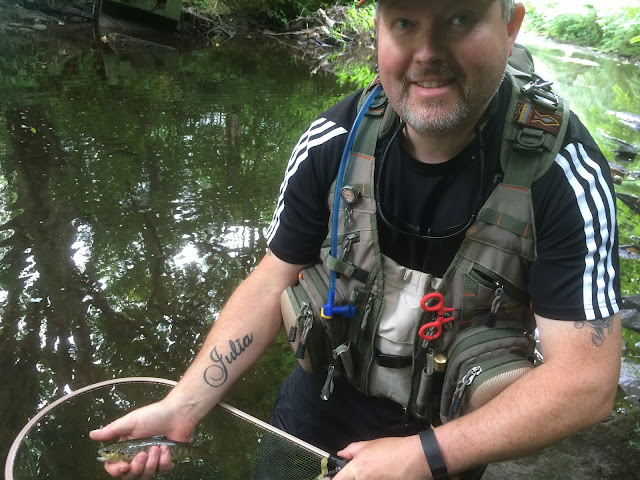 With time running short for Mark we headed to the final run and i missed one and lost one as it jumped on the strike. I was surprised how this method i had set up was working so well. It will probably never work again for some time as that's how river fishing works. I walked back with Mark and decided to stay an hour. Doing a quick run of the river with the 'new method' i hit into a fish literally as the nymph hit the water, the hook didn't set and it was off. Expletives.

I worked up all the way back to where i caught my first fish and i was in again! This time it was bigger, it was surreal at first as it was swimming the current, i pulled back and it was literally just staying in the one spot as the forces cancelled each other out. It realised it wasn't getting anywhere so turned downstream. Taking me straight under a rock i had menueavre the rod tactically to avoid a snap and though it felt like it took some time it was fairly quick. It then swam to another rock a little bit further downstream and sat under it, i advanced on it net read presuming it was tired when it swam towards me, the klinkhammer just brushing the net, thankfully not snagging it and turned back downstream. i was still chasing this trout downstream. I eventually got it stopped near a rough riffle which tired it out quite quickly, having to swap hands with the rod to get the net in with my right hand and bag the trout. A perfect 11 inch Brownie. Tired enough to have a decent picture taken. 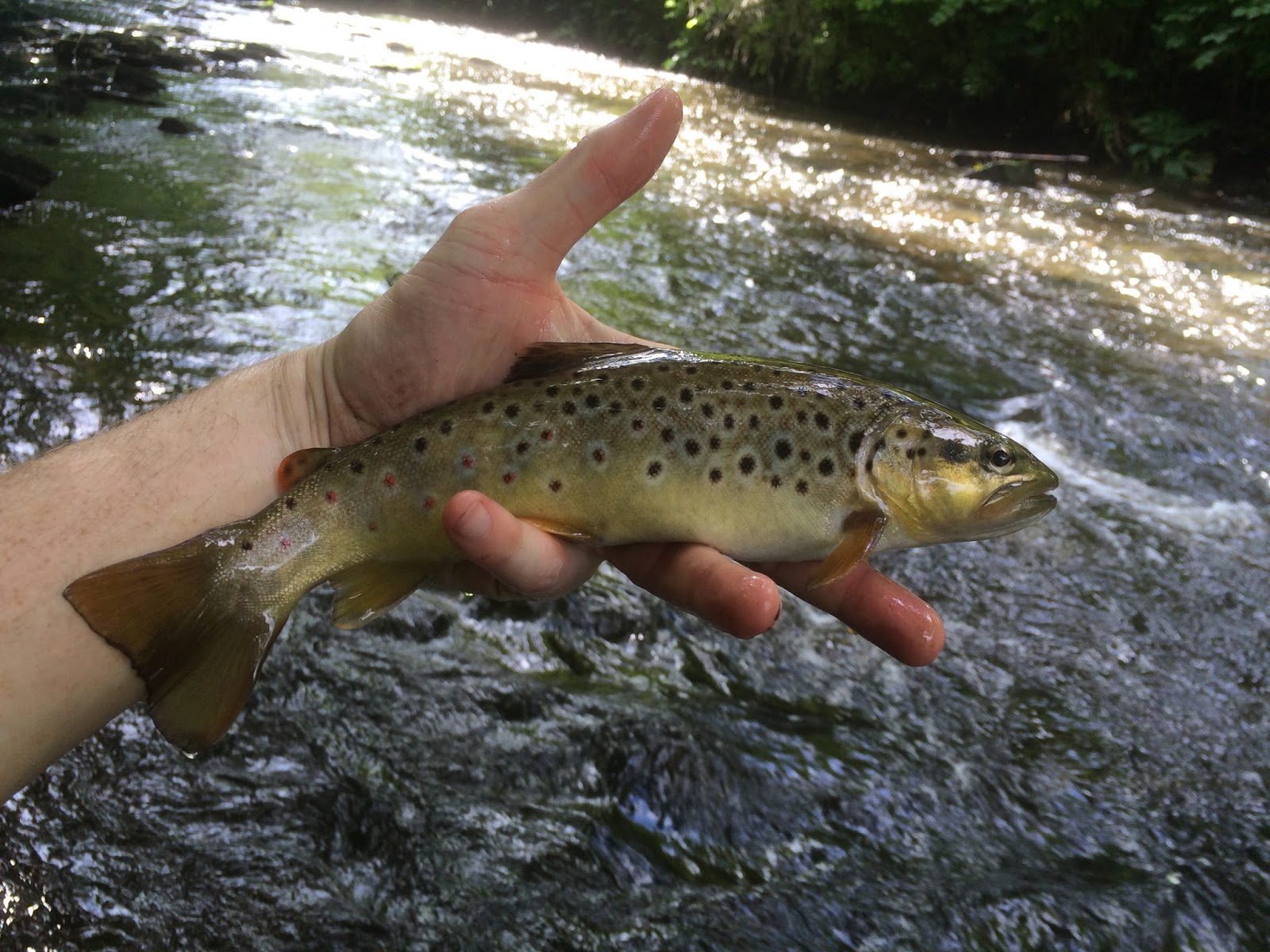 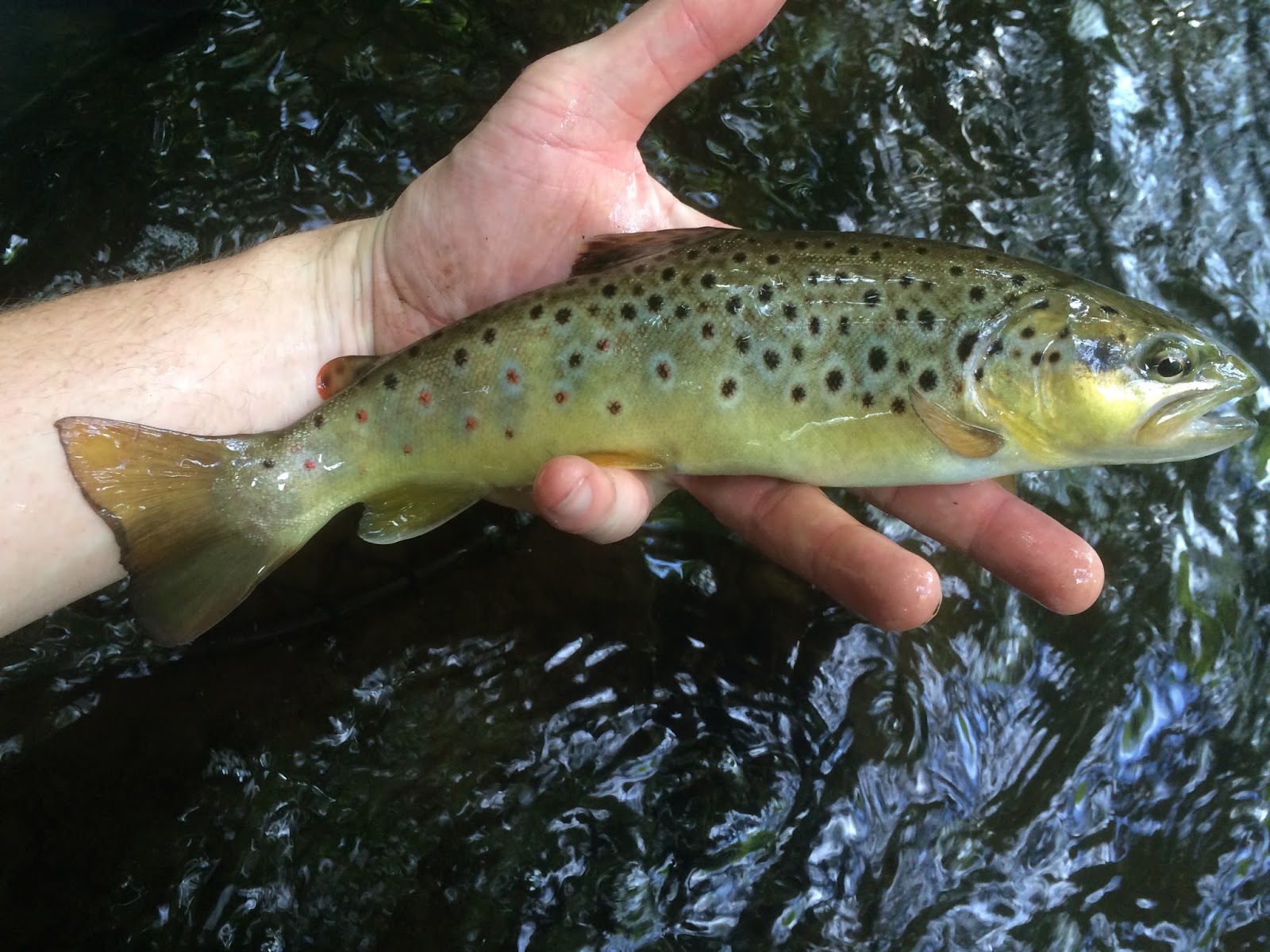 I was chuffed and with it being 4pm which was around the time i said i'd be home i made my way back up onto the path. Rung the Mrs to let her know i was on my way and then proceeded to fall 20feet down the cliff face. Yes, you read that right. The bank had collapsed under my feet and i feel almost vertically down the cliff. My reel made slight contact as it was muddy and my shin made definate contact with the rocky face. Ripping a hole in my wader. Thankfully fixable! I had a dead leg but could walk thankfully. I reclimbed out of the river and made my way to the end section of the river to test my waders. They are indeed leaking now. However, i managed to hook another trout during the test and this was a little fighter too, pulled me all around the shallows and as i drew it towards the net after a fair fight, it pinged off. More expletives. I decided to head off home.

On getting home i inspected my leg, it was pretty obvious it was a bad injury, as my waders came off i was greeted by a tennis ball glued to my leg. This was infact the swelling. I had x-rays in hospital for a suspected hair line fracture as i could support my weight. But thankfully 'the worlds biggest tibia' (as the nurse described it) had held strong and i was able to go home!

It was an unavoidable accident and if it wasn't me it would of been the next person who walked that path. Thankfully i'm ok and lived to tell the tale. 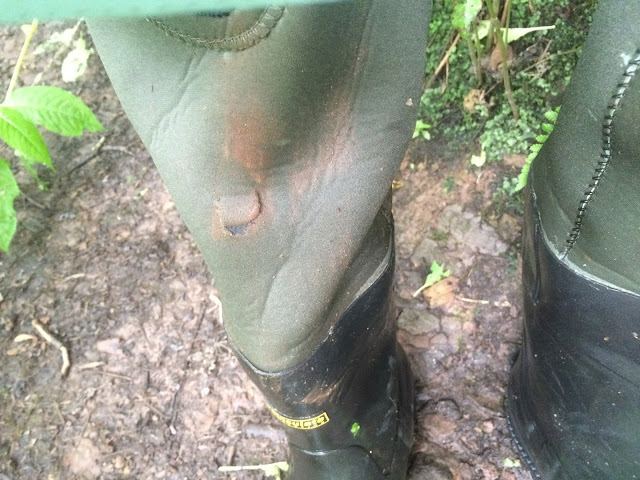