Fly Fishing - A break in the rain


It was a spare of the moment thing, with over the next 2 week predicted for rain a dry murky day while i was on a 11 hour shift didn't come into my mind too much. It had been torrential of late so the river wouldn't recover in a day but the day after, today, was something that wasn't expected. It was warm and sunny, like summer should be and it was then i decided to get some fishing in, hopefully it had recovered just enough!

It was just after 11 i reached the river, all my gear in a rod tube and a backpack, i'd managed to condense it down enough so i don't need anything in my hands, waders on and the nymphing rod set up (i brought one for dry fly) i was all set, with the loss of my action-cam there's no need to wear my fishing pack which held it as well as my gear so i stuffed my tippet and fly box in my wader pocket and left it all in the backpack. 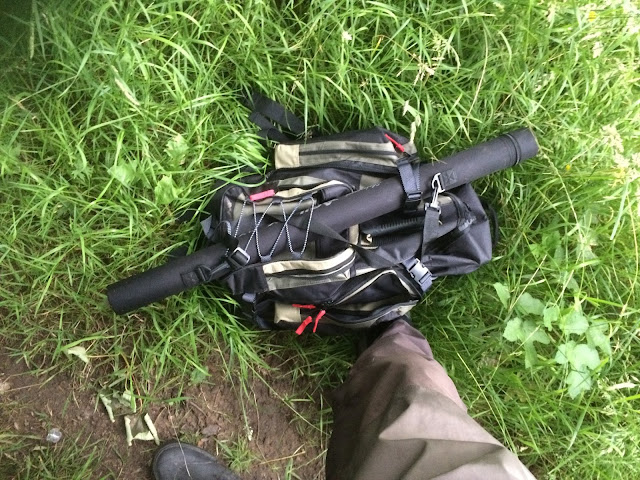 5 casts or so and i was in to a small trout, a great start and hopefully a sign of things to come, the water clarity seemed good at first with the sun beaming down on it but in the shallows it always does, anything over a foot was still a murky brown but it was enough. Not much later and i was in again, bigger trout this time, with it's beautiful blue hue on it's cheeks. I was using my polish nymph i tie which has become pretty much my main nymph, i tie it in a couple of different sizes and weights and maybe a change of color or thread for water conditions but it's the same fly and it has been very good for me this year. 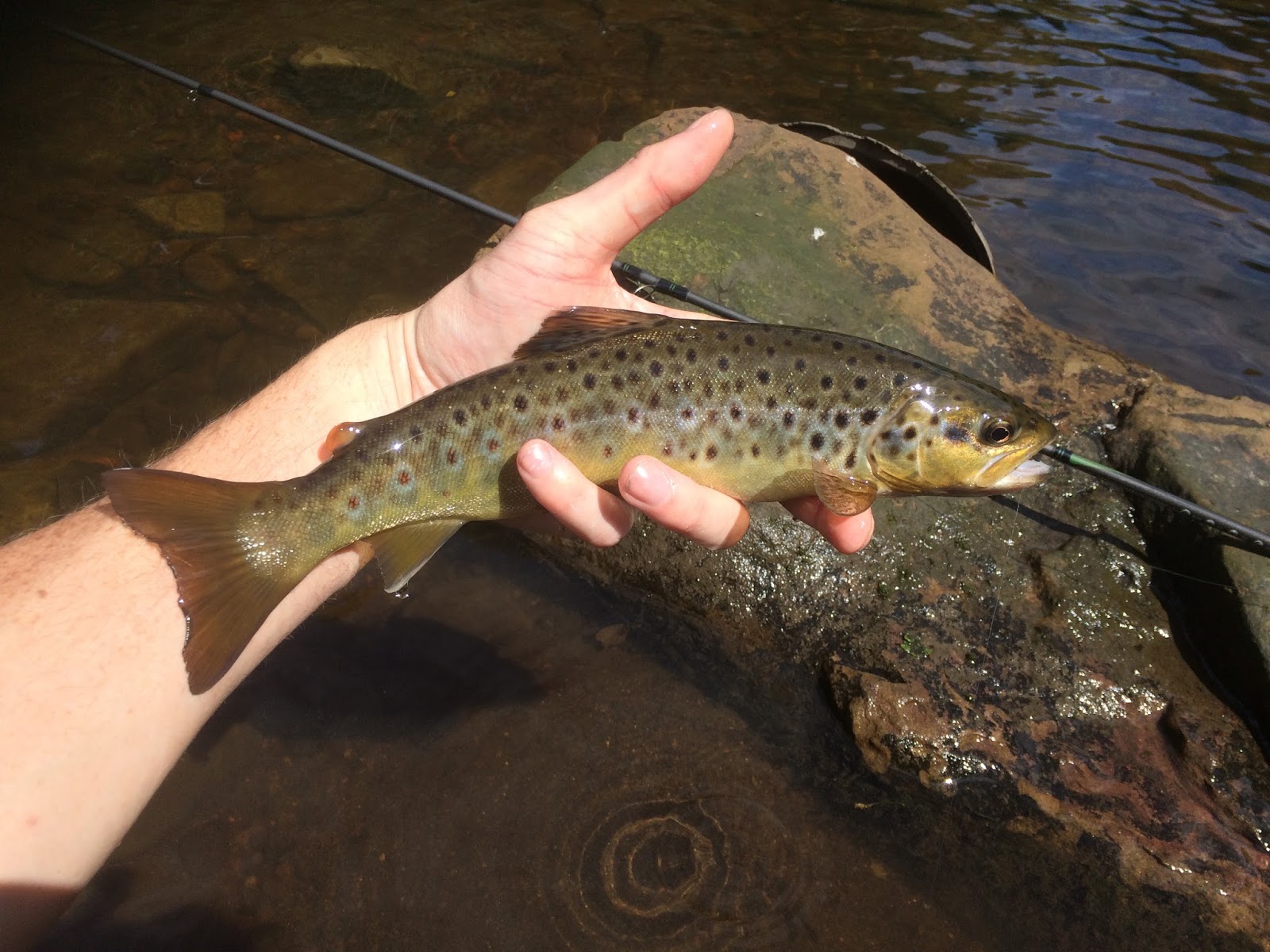 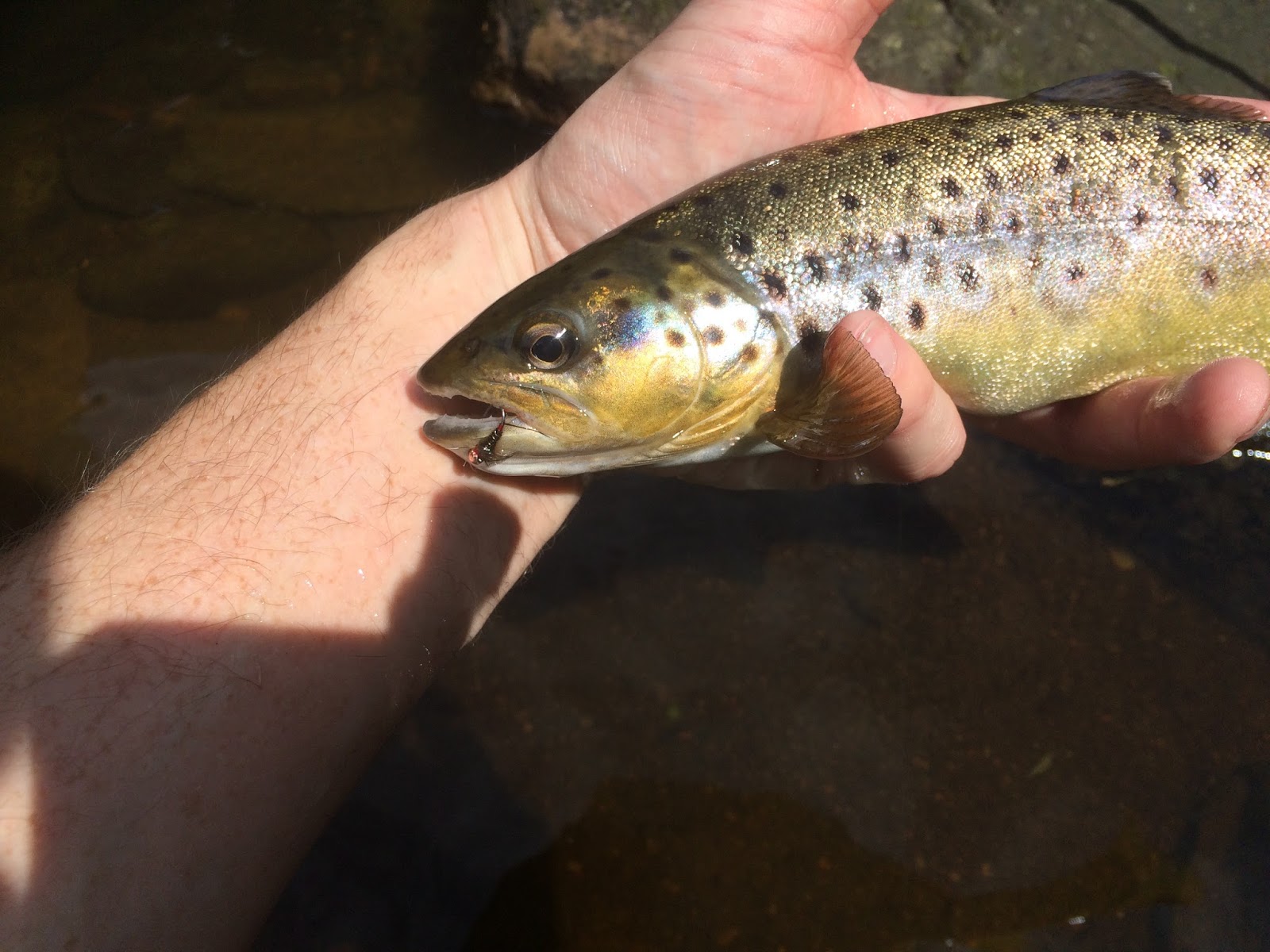 I started selling it on eBay after a lot of messages off Instagram and they've gone off to Italy and Argentina! But the most rewarding message came last night where a guy starting out fly fishing messaged me saying he had his first trout on the fly with one he bought off me! One day he may progress to tie his own and fulfill that milestone too!

I continued upstream and only missed 2 takes while landing 6 small trout, the color variations differing so much, trout have more chromosomes than humans (almost double) allowing them to have more variations due to their genetic diversity. They are a sight to see, no matter what size, some of them have truly amazing patterns, like little works of art, religious men will say god painted them, but i myself believe that nature is a beautiful thing which makes catching these trout, regardless of size a great thing to do. 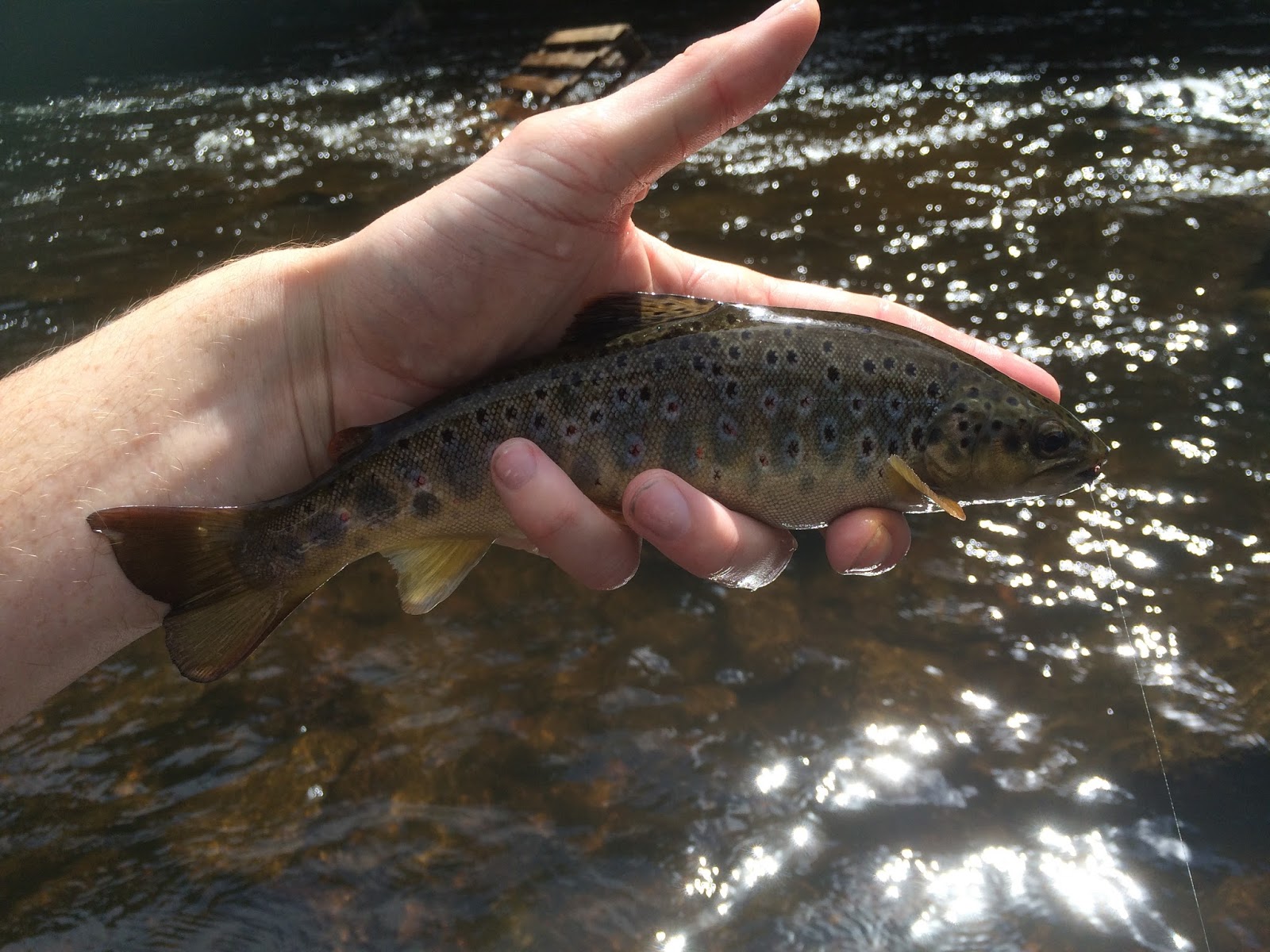 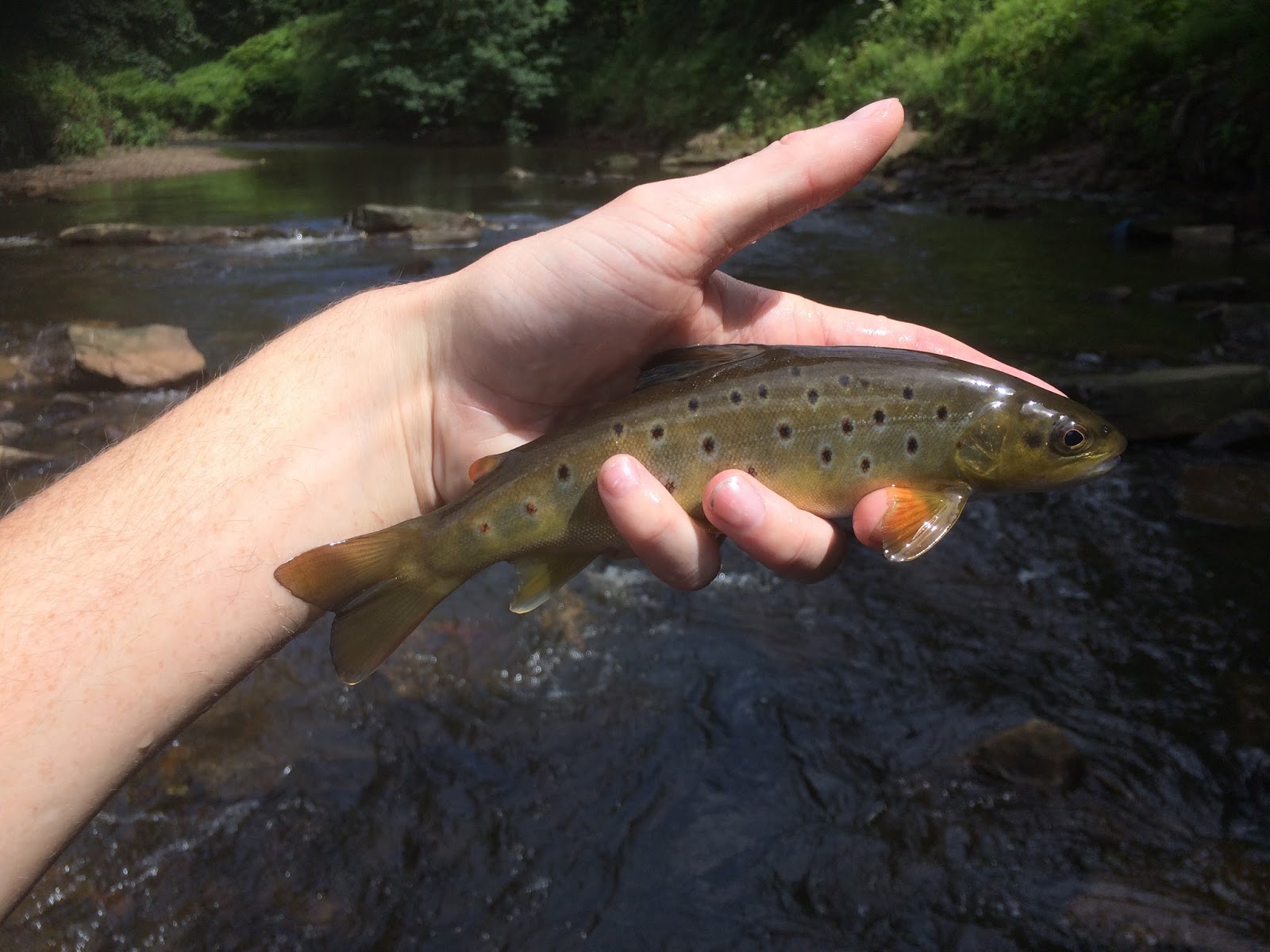 I saw a rise around 20 feet above me, so i set up the dry fly rod and waited, it never showed again, so i continued nymphing upstream and hit into another bigger trout, another beautifully made trout which is always a shame as you never see them long in reality, hence i take a picture of most of them, my harddrive is pretty much a compilation of trout patterns. Taking a picture is effortless and quickly done. Net the trout, keep the net submerged while grabbing phone out of pocket, hold phone in mouth while wetting left hand, grabbing phone ready in right hand and reach in to grab the trout. Quick lift, pause, picture, release. I even think dripping water adds to the image, some pictures don't go to plan as without having a firm grip on the fish it is free to jump free if it wishes hence why it's always taken over the water. 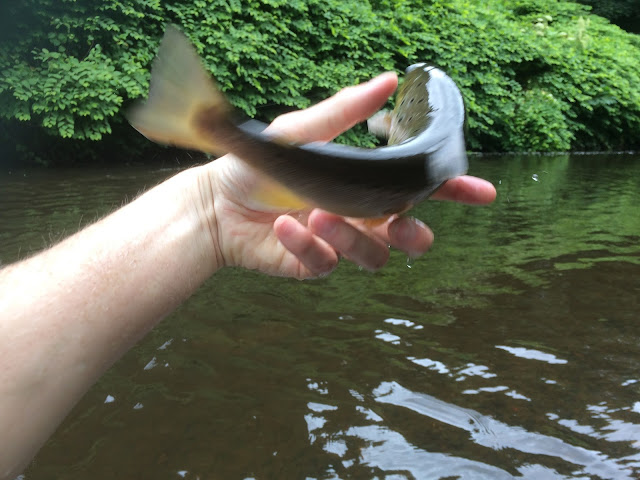 I fished a long stretch which disappointed me really with only 2 small trout, i've had plenty of big trout from it and the conditions seemed ideal but i didn't catch until i was fishing the pocket water in the riffles above. I then spotted a solitary rise upstream, just in front of a large boulder. It wasn't a big rise so it had possibilities of being a big trout. I watched and watch this rise, there was no clear indicator of what it was taking but i had put a quilled f-fly on which i had tied, olive color. Then it gave itself away, a small trout lept clean out of the water and then continued to rise. i decided to go for it regardless, a bit of dry fly action i had been missing for a while and it was in a tricky position. I allowed the fly line to land on the boulder rather than drift round in the current flowing around it, which minimised drag and allowed for a good presentation. It took it with a little plop off the top. It will hopefully learn to not break it's cover when it's bigger. 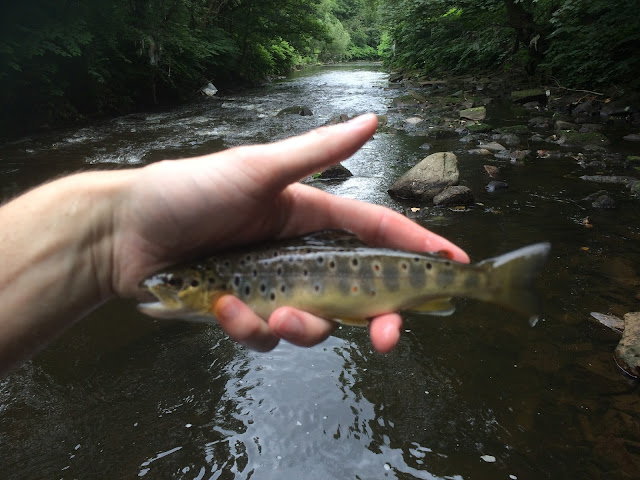 There would be no more rises unfortunately, but 7 more fish came on the nymph bringing the total for the day to 21. I stayed while the rain came in the hope it would attract a rise but it didn't. So i packed up and headed home, it was a warm rain so the fact i had no jacket didn't bother me, but i have discovered a small leak in my left leg of my waders which i need to locate, half an inch of water from 4 hours fishing means it might be a tricky leak to find. 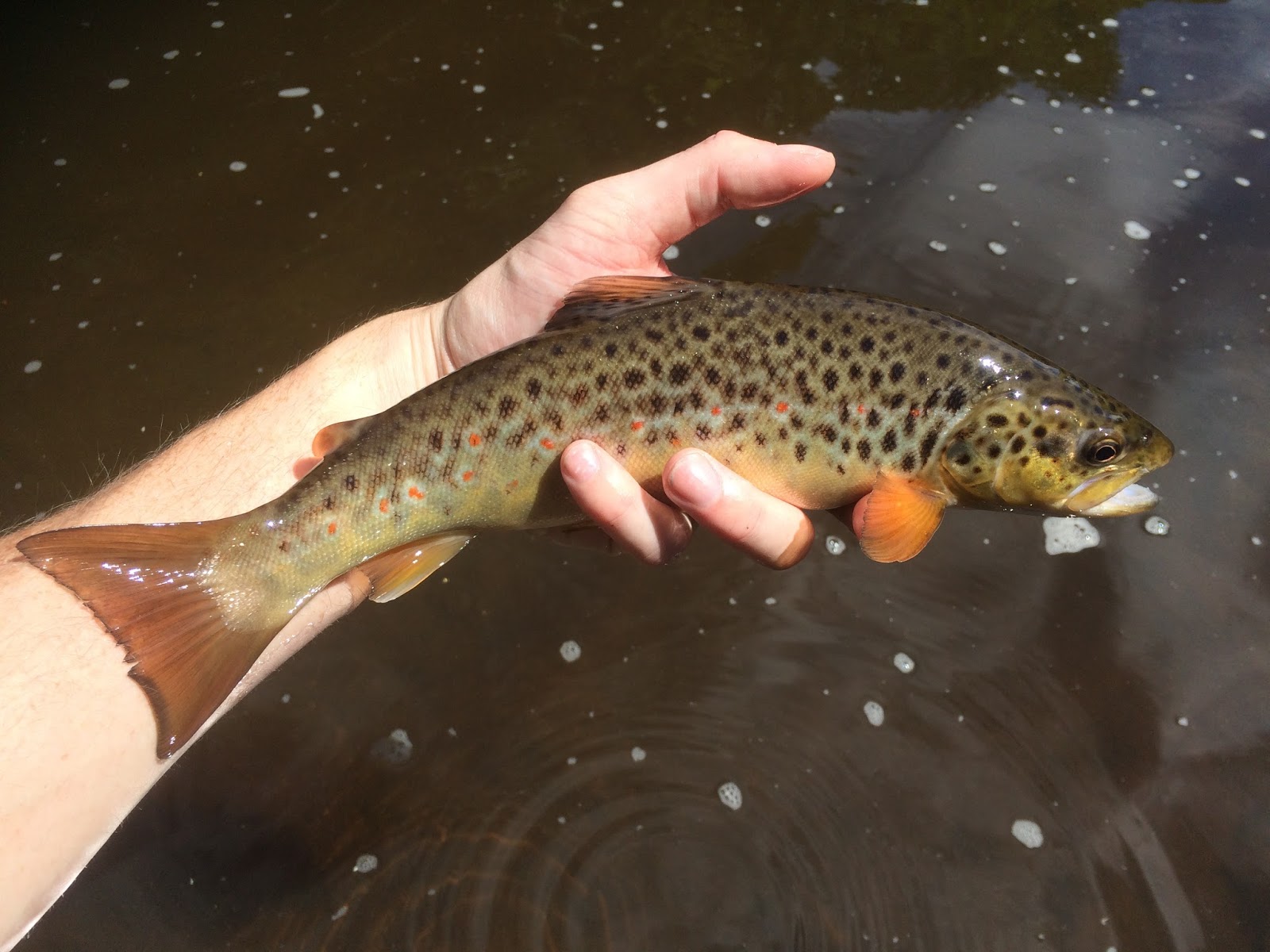