It seems the days go by so quick during the open season and i already can feel time running out as we edge closer and closer to the close season, be it a few months away still the winter closed season lasts forever. The weekend of the 23rd came at the end of a very hot week turning into clouds and rain but still mild temperatures. The Saturday was 32' in the early part of the day, when i was at work, but with an early finish i had taken my gear with me too work and headed straight to the river. I knew it would be busy with the school holidays combined with the weather but with clouds heading in there wasn't that many people actually riverside.

I hadn't been fishing long in the oxygenated white waters where i had pulled 2 trout out in quick succession did i meet someone else. I noticed a head watching and the pleasantries were said and again that question 'Is there anything in there?' 'I hope so 'cos i've just had two' i joked. I beckoned the couple down who were in there 50's or so and gave them the basics of what and why i do what i do, it's not just fly fishing, its not just an escape from reality, it's so much more. I said give me 5 minutes and i'll have you a fish, in fact it didn't take that long but with the fish welfare priority it wasn't too happy with the ordeal and was quickly back in the river and away. 'There will be one just there' i explained, 'how do you know what to aim for?' and so the explanation on feeding lanes and adjusting your bodies of water based on weather, depth and oxygen etc and i was in again. This trout was happy to hold still and be the star of the show and he was himself back in the river once more. 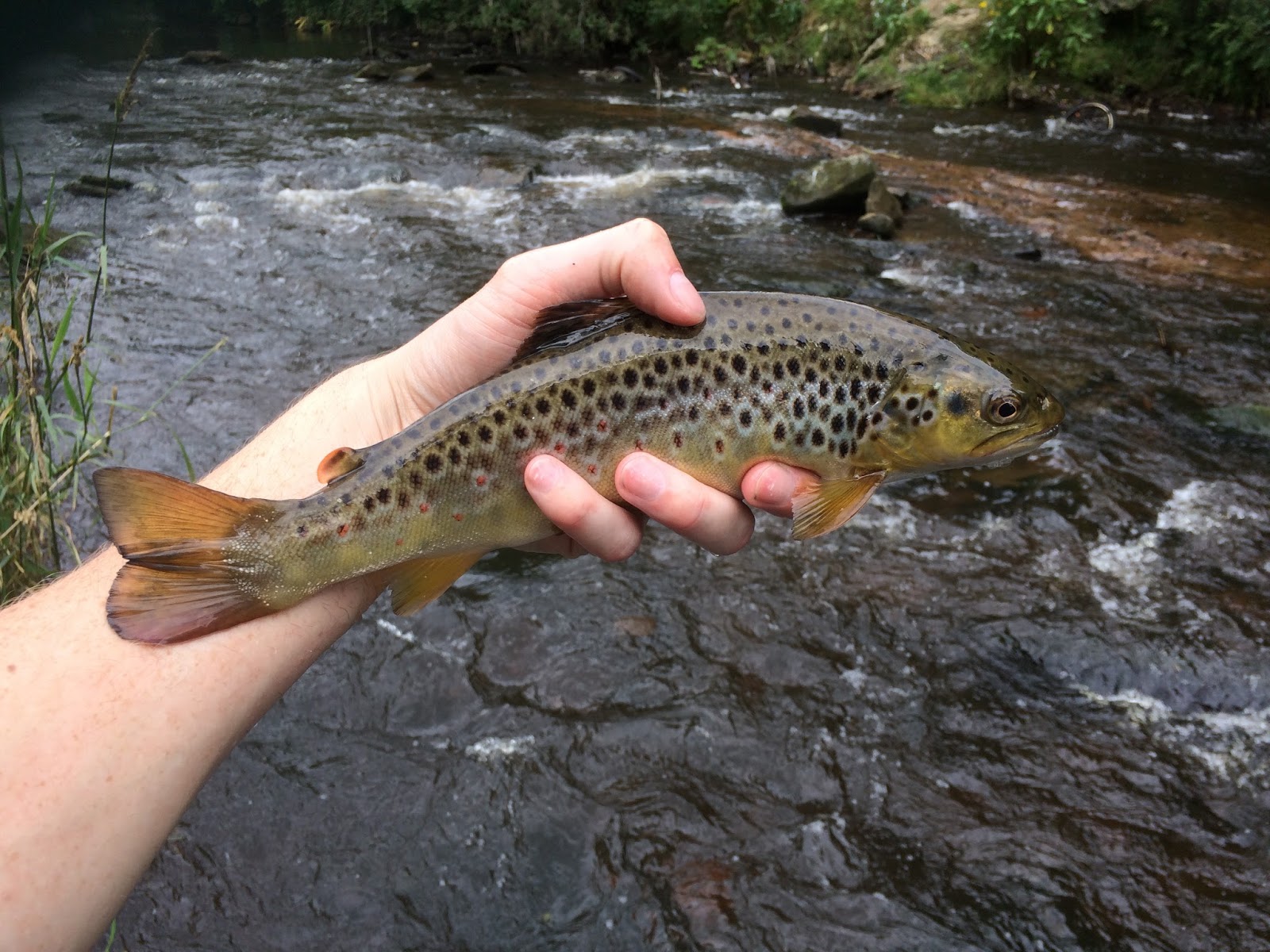 We bid farewell and i continued upstream, with a couple more trout i noticed an unusual rise in a large back eddy. With all the foam in the eddy it was hard to figure out if it was a big trout or a small one but either way i set up the dry fly rod. It had stopped by now and despite covering it with several casts, nothing. I headed on up to a run that should hold more trout than i have been getting her lately, it's just below waist depth, plenty of cover, plenty of oxygen running through a long pool yet nothing. But just above it, a small rise. I covered it but it was moving around but eventually it took the dry, a small trout but another on the dry. They are very slowly building up. 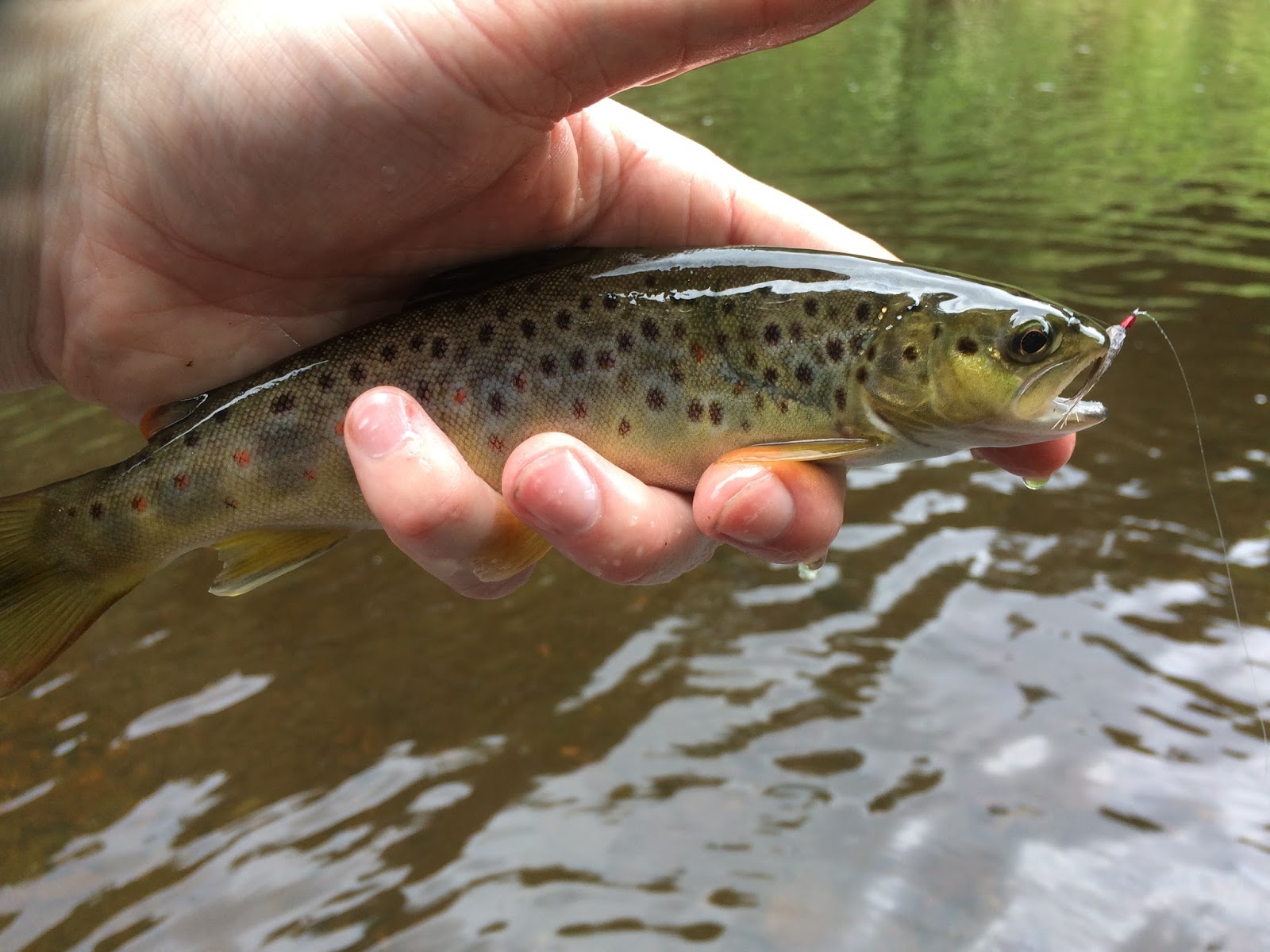 At the end of my run a South African sounding man and his daughter were playing in the river but i knew they hadn't affected the short run i wanted to fish and first cast i was into a small trout. This prompted a very slow walk over by an inquisitive father but not fast enough as i couldnt hold about too long so i released the trout, knowing that i would probably catch another should he want to show his daughter. I didn't fail to live upto expectation and i hooked into another trout. They didn't engage with me much, more interested in seeing the fish but i offered the girl a better view of me releasing the trout back into it's home. 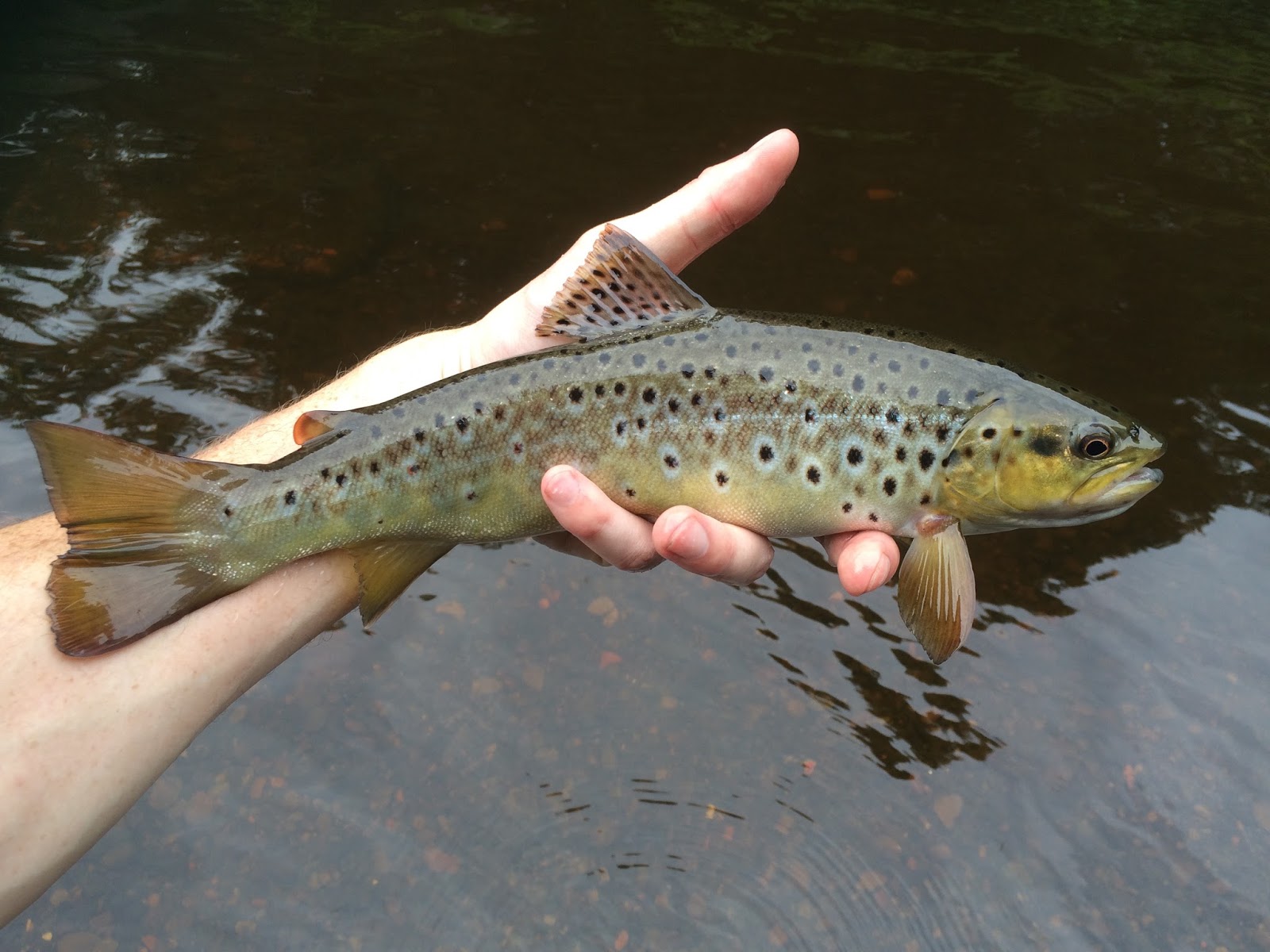 I don't mind fishing with an audience, well if people are gaining positives from it anyway. I hope people start to realise the life that is in these rivers and help protect them more, i hope people see that me releasing them encourages them to do so if they decided to take up fishing. In all i had 14 trout averaging around 1 every 8 or 9 minutes and a lone minnow, not had many of them this year!

The Sunday i was fishing with my good friend Mike France. We had a job prior to do which was water sampling to test it's levels of ammonia etc. We continued afterwards to fish and i was soon into a trout, a good start, the water here was visibiliy clearer than the previous section and was deceivably deep. The second trout had the fight of a big trout but was only a 1lb 1lb 1/2, it took the nymph after i let it drift under a tree and ran 20 foot of line of my reel as it stormed up the far bank. It turned and i got it into the deeper water infront of me, it started shaking it's head violently and it was off. It hadn't slipped the hook it was an error of my own. I had been experimenting with tippet rings to help the line sink a little quicker but the dropped hadn't been tied on perfectly, despite a check i hadn't double checked it and the fish was gone. 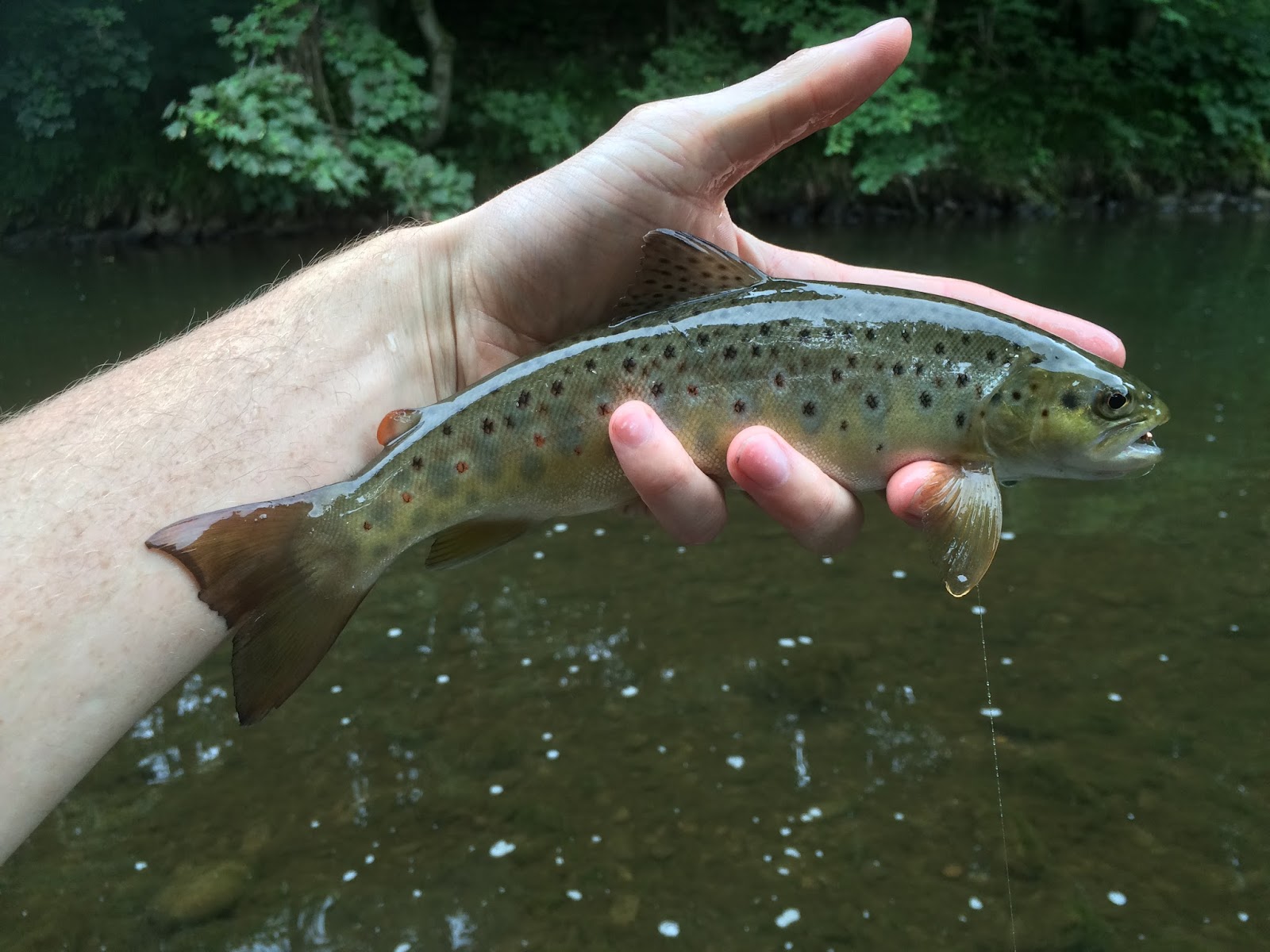 We continued upstream hitting into the odd trout, the river was really on it's arse and we had to do alot of water searching, i even got one through a punt at running a nymph through a very deep but still pool, with how they have been lately (staying in fast oxygenated water) i really thought i had hit a snag. As we proceeded upstream Mike got a nice trout but the weather continued to worsen. The rain was on and off and as we hit a nice pool which again should of held more fish it became torrential. We continued for half an hour but as we were entering narrower valleys we were running the risk of getting caught in rising water so we called it despite some very fishy water around us. 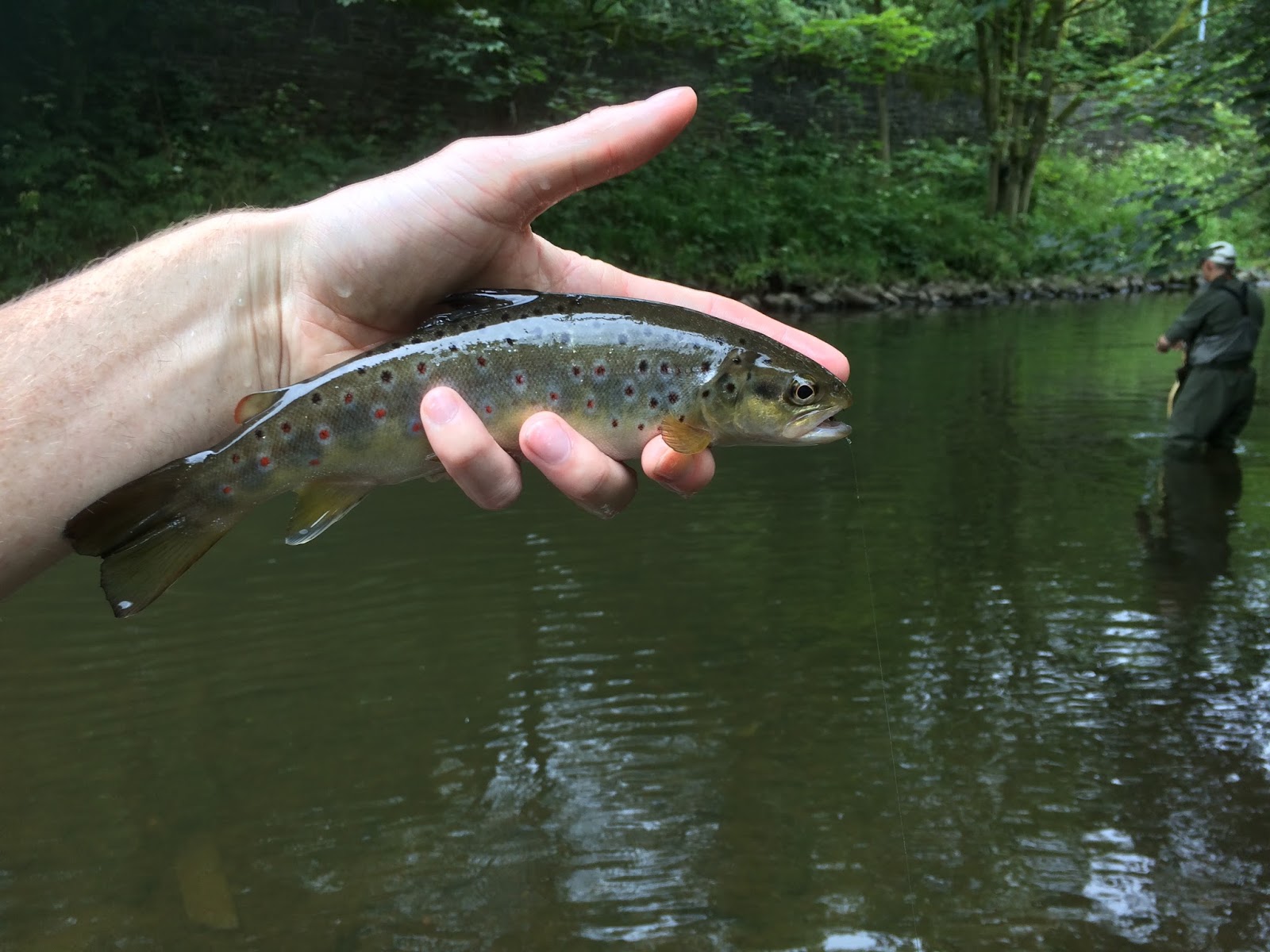 The weather this year has been very unpredictable and has made fishing trips hard, but i do enjoy fishing with Mike, it's nice to enjoy the moments together and have a laugh. Hopefully i will see him again soon and we might even go after Grayling again, it has been 6 months since i last held a lady of the stream, just don't tell my Mrs. 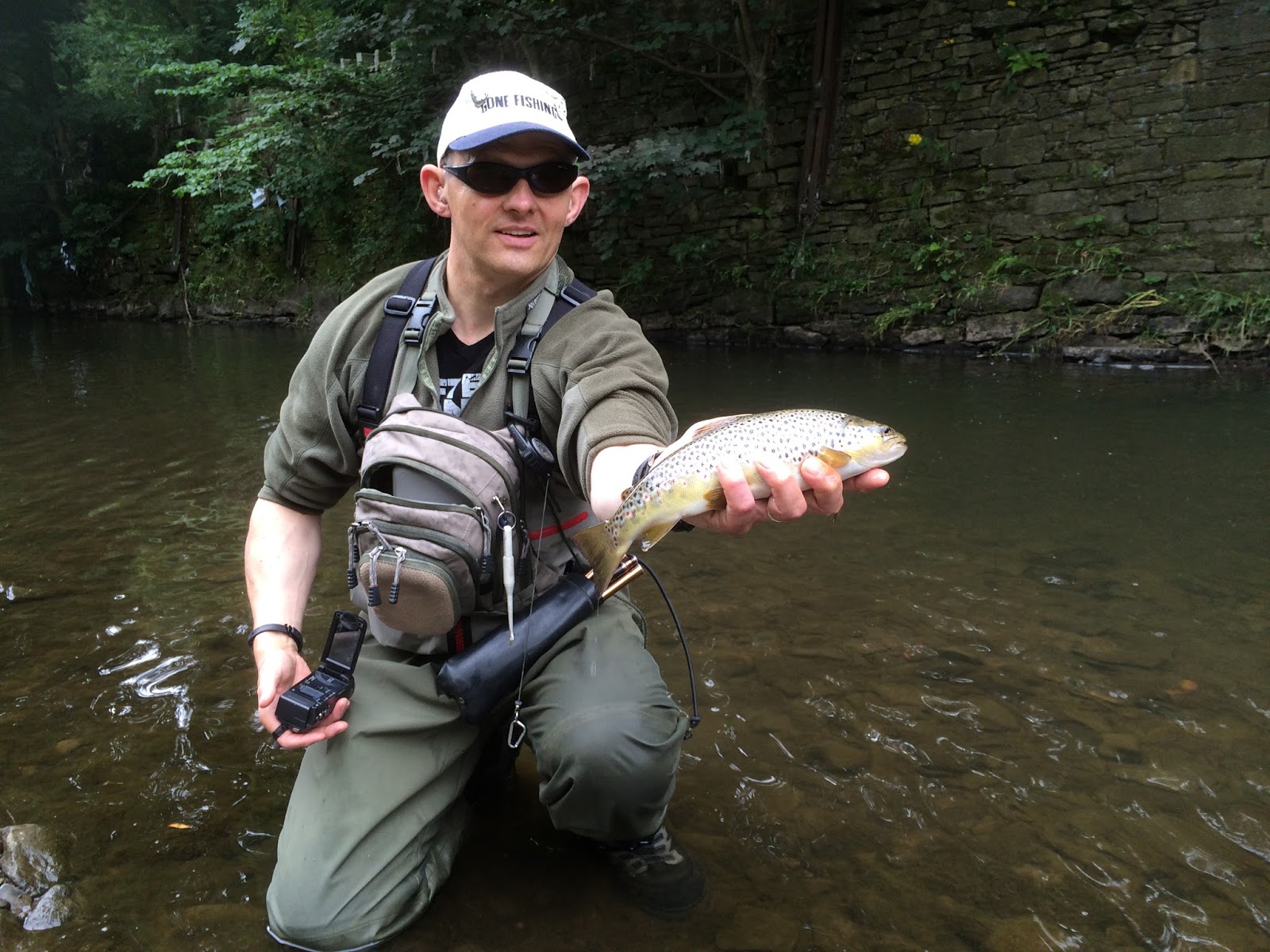 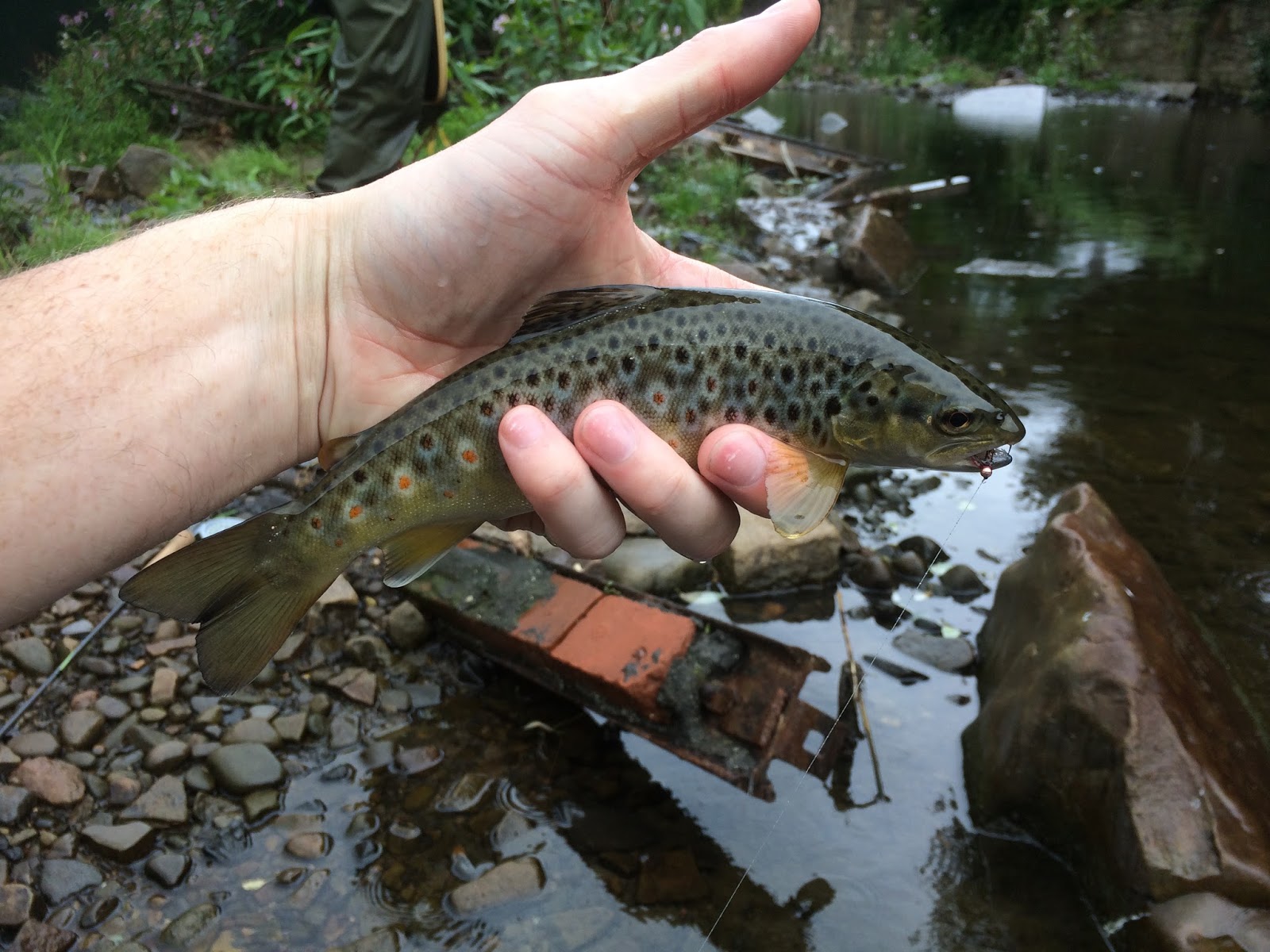