Fly Fishing - Sight fishing on a small brook in a thunderstorm

It had been an interesting start to the day with the EU referendum result and it caused a stir in the weather too, from 23' the day prior to a murky muggy wet morning. I had hoped to have gone fishing today but i knew my options were limited and as i sat and watched the radar as the heavens opened outside i spotted a potential break in the weather. The problem was, as i don't drive, i would have to walk an hour or so in the rain, in fact its an hour and a half and i lost half an hour of dry weather as i was still enroute. It was nice to dry off, i only wore a shirt as it was warm, and as i passed a small lake carp and pike basked on the surface, tempting i thought but no onwards i must.

I reached the river which is one of them totally urbanised brooks, more of a drain than anything but i know its secrets. Anyroad as i headed up to the more fishable stretch i thought i should look over the wall  to see how good the clarity was considering the rain earlier. It was good, a foot is all you need i say especially when it isn't even a foot deep in most places. But something else caught my eye, 2 trout just lay up taking nymphs in the shallow water. The trout at the back though was a beast, i was at least 10 feet above it, the path is raised above the water level thus adding to the 5 feet of wall. It was probably 3lb or so, the trout on this stretch are fat, probably from eating the rats that i see roaming here.

I was in no way prepared with my 10ft #4 no waders on and i wasn't even set up. In honesty i didn't expect much, i flicked the nymph off the wall and held the indicator above the water, it went past but it turned and chased after it, i saw the white of it's mouth and i struck! I nipped it but missed! Damn! It went straight back in position so i cast again this time i didn't fail in my strike it was on! I lost my camera last time i was out fishing so i grabbed my phone and videod a short clip of it as i tried to work it out of a small tree at the side, which i did and numerous times i had to pull it from under the overhanging back on the far side, now i'm used to a #6 rod so the level of bend was a bit frightening especially after the snapped rod incident but after a good few minutes it was on the surface. Then it dawned on my, how the hell was i going to net it. I couldnt go upstream or downstream because of obstacles and even if i had line of a breaking strength to haul a trout of that size 10 feet up a wall it would go everything i preach for as a catch and release angler.

Have you every tried to get your waders on one handed? Not recommended! Luckily i managed and knew what my only option was, to jump over the wall. I climbed the wall, not helpful in waders, and perched waiting, were are the dogwalkers when you need them, i was hoping one could hold my rod so i could grip the wall facing it  with both hands and jump down. But no, so i turned rounf lowered myself down with my rod horizontal in my mouth, gripped the wall with my boots, bent my knees and pushed off, i landed safely, a little rough on the legd but i was ok, i pulled the rod tight but it was slack, the line had snapped, it must of caught on the wall or the shrubs as i'd jumped! But the trout was still there! Tired and recovering, i had 2 options, rush it or sneak up on it, i chose to sneak, i crept up behind with my bet outreached, it was lay on the bottom, its a shallow river and a big trout, as i went to put the net under it to scoop it, how it would fit hadn't crossed my mind yet, it bolted, like a freshly released trout it was off.

Thinking back i don't even think i had one bad thought, i can remember saying 'that was worth the walk alone' but i knew i hadn't thought every possibility through and thus it was my fault! I moved upstream as the rumbles of thunder groaned in the distanced, i knew i was running out of time, with the brook very overgrown it made spotting quite hard but i eventually spotted a feeding pair, the rear trout on nymphs and the other on drys, poorly positioned i might add as it chased each one downstream. They looked similar size from this distance so i went for the back trout, with trees all around on my side, the bow and arrow cast was fairly accurate and tempted the trout out of its lane to take the nymph. I practically dragged it downstream to try to avoid spooking the other trout and it used the vegatation to its advantage as well. I'm used to fighting in vegetation though from my course fishing days, popping a float in front of a tree or reed bed 5m away. It was soon in the net and it was a lovely trout. 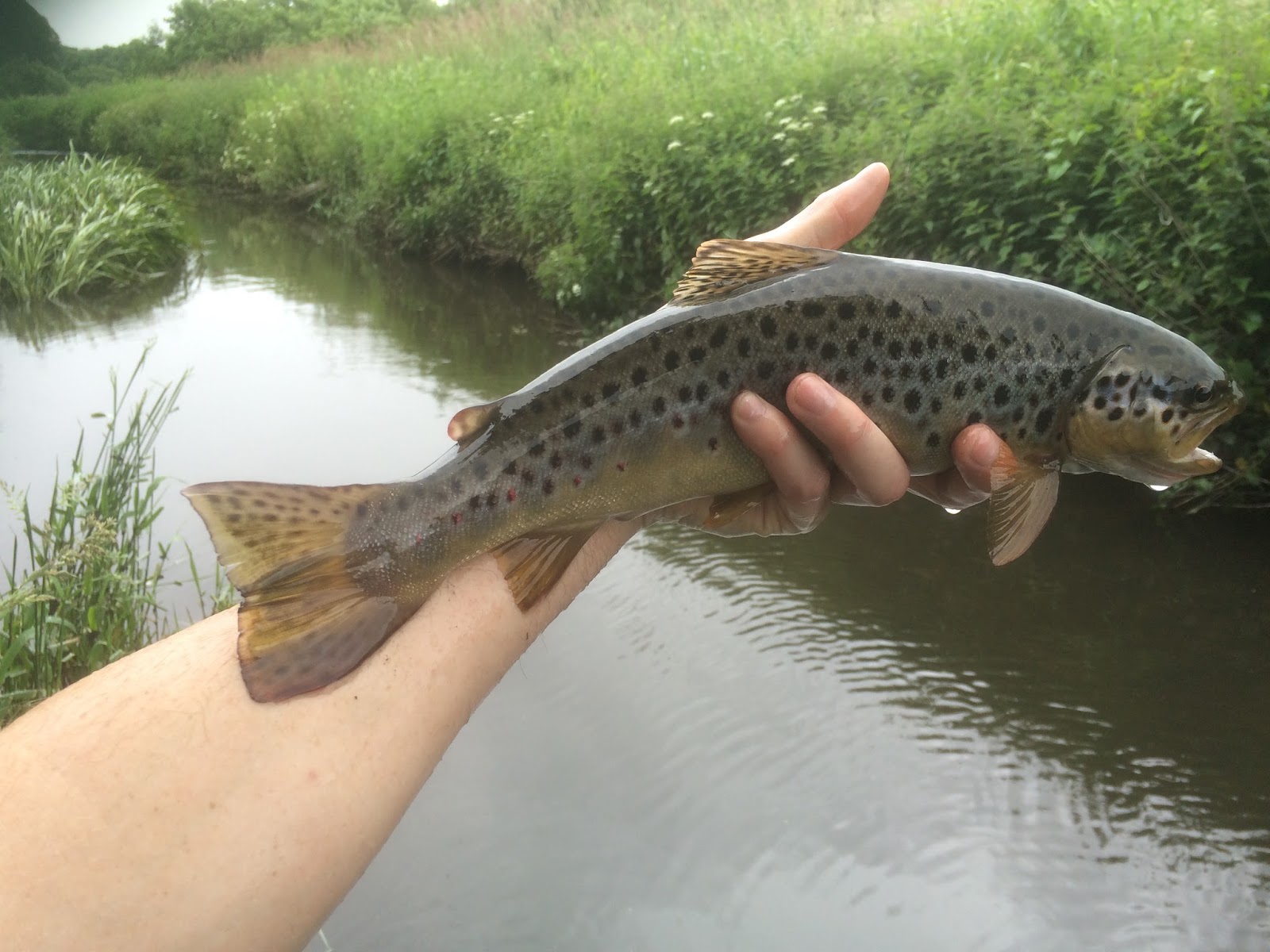 I headed back for his friend as the first rains hit the water, i was very conscious of the thunder but there had been no lightning yet, it took it first time, it was smaller so it could of been a different trout but it was a trout none the less and not long after the rain became torrential. The river almost instantly became a solid brown mess. I headed upstream and camped out for an hour or two under a bridge, watching the inlet pipes grow in intensity as the deposited all their crap in the river, it was strange as the river went up about 2-3 feet then dropped a few inches despite the rain continuing and eventually the blue came and the rain eased off till it stopped. The damage was done now, it would be unfishable for a while and as i walked the long walk back home i only wished the weather had been like this earlier. 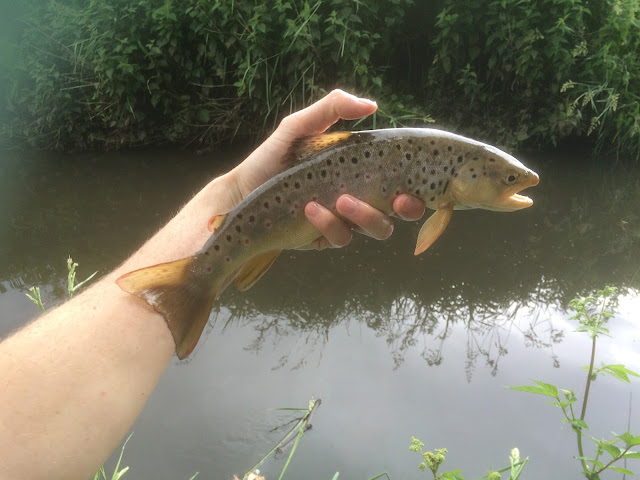 On the way home i came across a mother duck and 10 or so ducklings huddled on the path, this was a very bad situation for the duck as it is prime dogwalking ground. So i knew i had to try to move her on, she wasn't far from the water but she was on the wrong side of the path and was not for moving.  She bigged herself up and hissed so i lowered myself so i didn't appear as threatening and tried to calm her, she did, so i reached forward to usher her towards the water and she went quackers! Bit me on the knuckle, it didn't hurt but i admired her courage, it would be no use on a dog though. So i stood behind her and put my foot near her to target on, she got the idea and attacked my boot and got hold of my jeans! it was quite funny having a duck swinging off your jeans as it flaps away trying to scare you off, but luckily it spooked the ducklings who made a break for the water and the mother duck chased after them, wrapped her wings around them and ushered them into the water. It was mission complete and i was much more satisfied when i passed two Jack Russells off their leads a couple of minutes later. 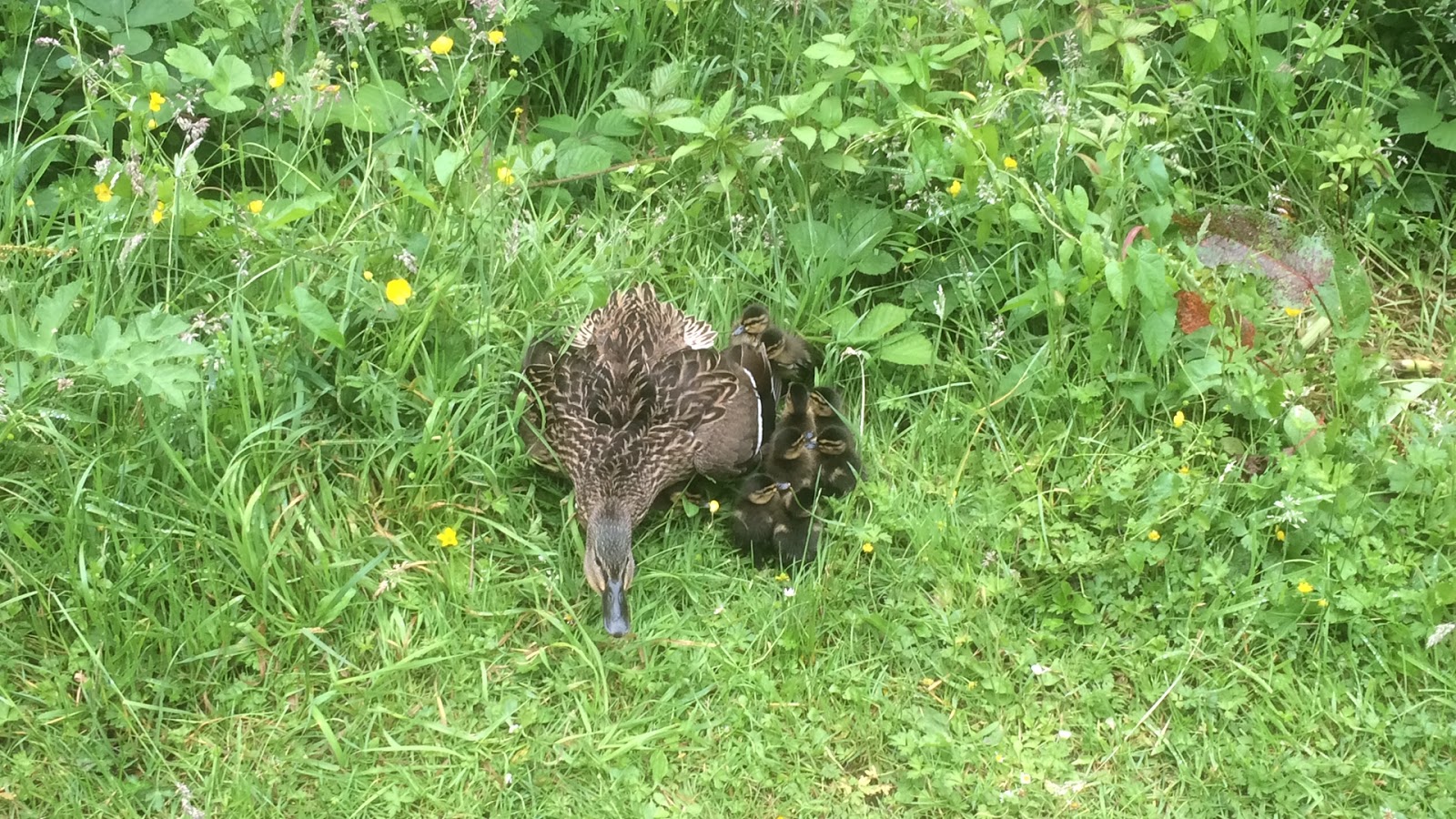 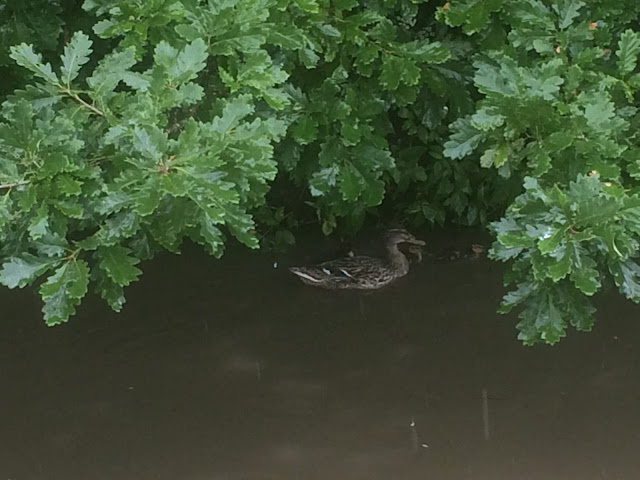 Now one thing i have noticed with my pictures is they don't give a clear indication of size, i noticed this when i was with John Tyzack as usually i take the picture of the fish myself. Here i am with the same trout in my pose and how it looks if someone else takes the picture. 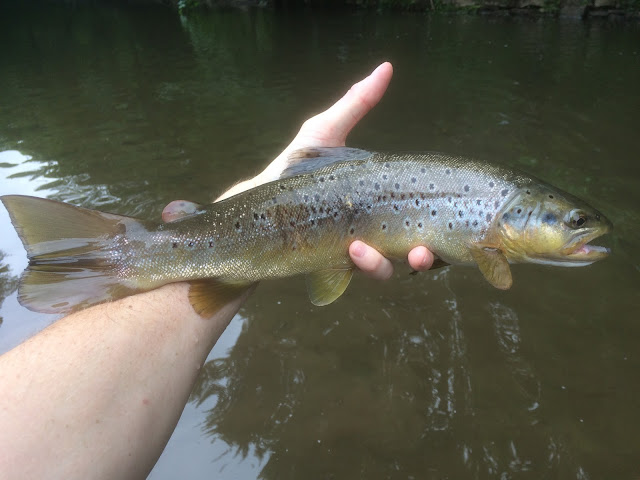 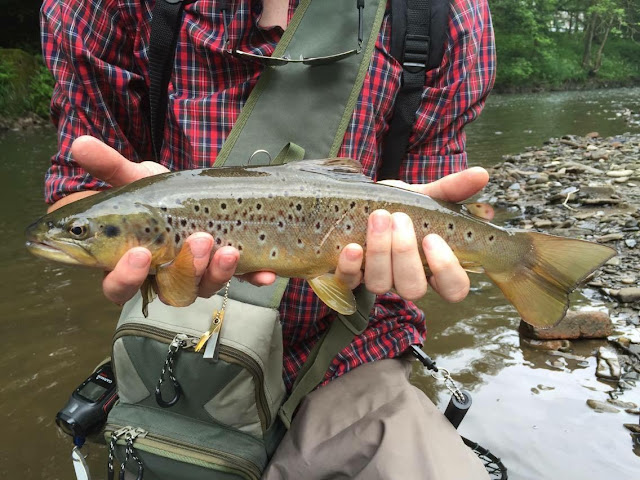