A hatch on the Irwell - Fly Fishing

It was a cold day in early April, the first rain for a couple of weeks had occured during the night and a heavy upstream wind blew along the river. The river was already flowing much faster than the other day, with choppy waves over the rocks despite the river only being up about half a foot more. The colour of the Irwell was still pretty decent too, 2 feet visibility i would say before it melted into that 'Irwell green', i'm sure that's a colour of its own. I was suitably prepared for the weather, i had my buff on which was protecting the back of my neck from the hailstones which would come and go every 15 minutes or so. My hands, however, were freezing, from checking fly life in the river bed and the biting wind, it was safe to say it was a bit like winter. Tying knots had become difficult already but i had to choose a method to fish.

I originally planned for 2 nymphs in a czech nymph method but didn't have enough weight to stop them dragging, so i went back to the classic klink n dink, the nymph doesnt drag as much, thus sits lower in the water when i use this method, so even with a single fly i tend to get more depth than 2 nymphs drifting under each other. I set the nymph around 3 foot under the dry, the line tied around the body of the materials being a barbless hook and popped on again a pink Bendles Bug. The bridge pool had changed since the other day, the rain had washed down alot of trees and caused a leaky dam across the river, there was nothing biting in this pool but i did get one underneath the other arch which was taking more water through it to compensate for the other arch. Them trees will go during the next rain.

Now i really wanted to cross to the other side of the river but the extra flow was posing quite a danger, so i clambered along the bank upstream, past fresh deer tracks and bodies of large cray fish near a rocky opening, the mink were doing a decent job hunting them. I guess the crayfish not being totally wiped out gives an extra food source for the mink rather than fish. Another wave of hailstone passed and a sparrowhawk swooped low over the river, i marveled at how wild things felt, yet looking down at my feet, plastic, paint tins, tires, oh how ignorant our country is becoming has become.

Looking back to the water i noticed some of the riffles in the calmer water had more centric shapes, stopping for a moment i witnessed it. A trout rising on the Irwell, not one but 4 of them, i had fished this section for 4 years and never seen a rise here. I saw the olives on the surface being washed down river, struggling to take flight in the poor conditions. The last trout i saw rise on the Irwell was before the pollution event so it had been literally 2 years since that day that i had seen a trout rise below the pollution site.

The problem i faced now was my hands were cold and i didn't feel much like tying a dry on, the heavy wind would make casting difficult and it would be coming off my left shoulder as i was on the wrong side of the river (the reason i wanted to cross). So with my 10lb line going to my dry fly and 2lb tippet underneath to my nymph i cast upstream into the path of it. The first one took the nymph within a second of it hitting the water and i missed it. Targetting the next one and casting a little further ahead to give me that second to prepare the dry disappeared and i struck into it. It was on.

I ended up with 3 trout there, 3 of the 4 that were rising. A couple had fresh battle wounds, a tendency for many trout in this area due to the high number of cormarants and goosanders. Next time i am here i will slow things down and watch for rises, not something i had done for a while here since them being none existant beforehand and probably go on a warmer day too. 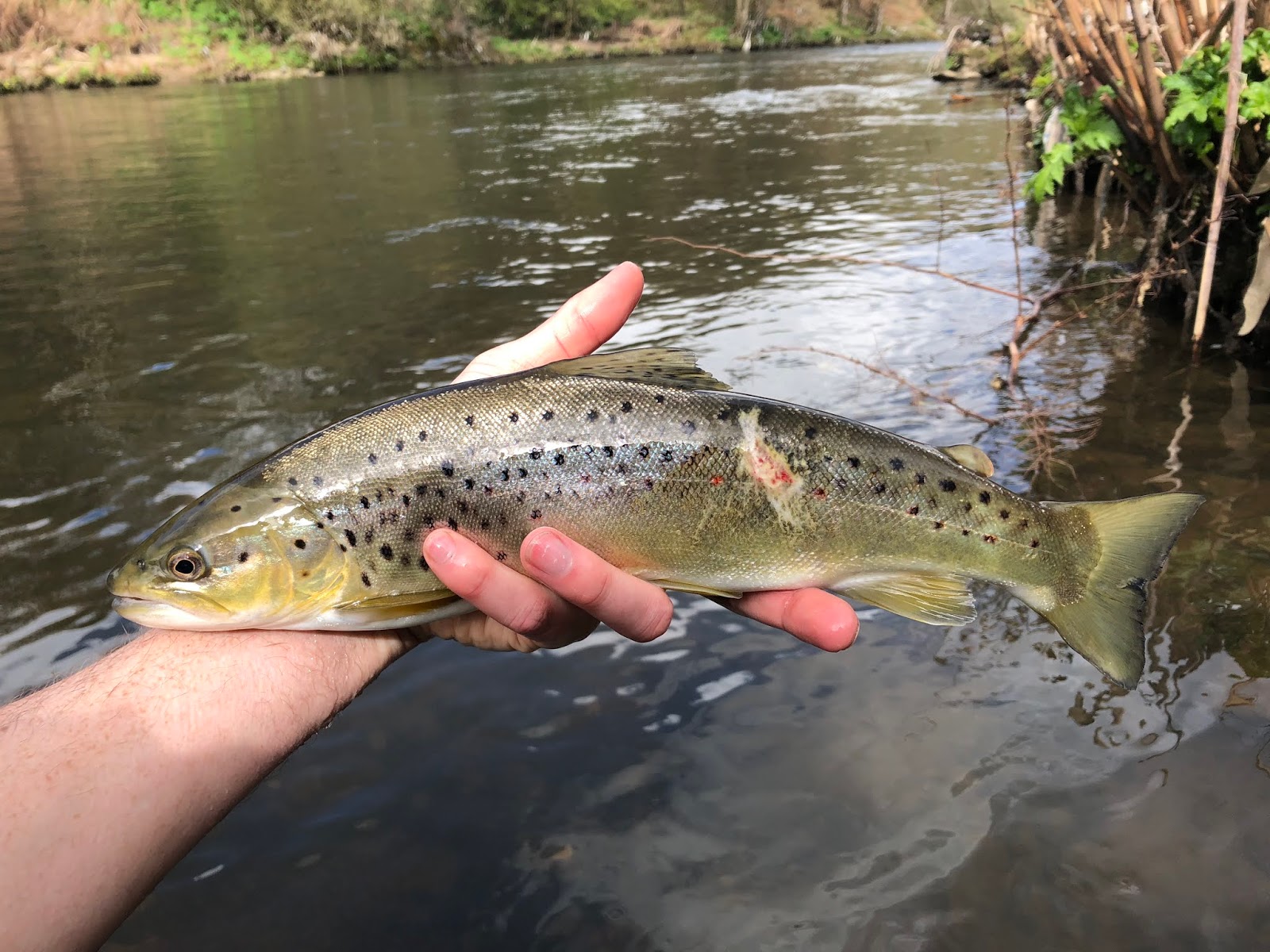 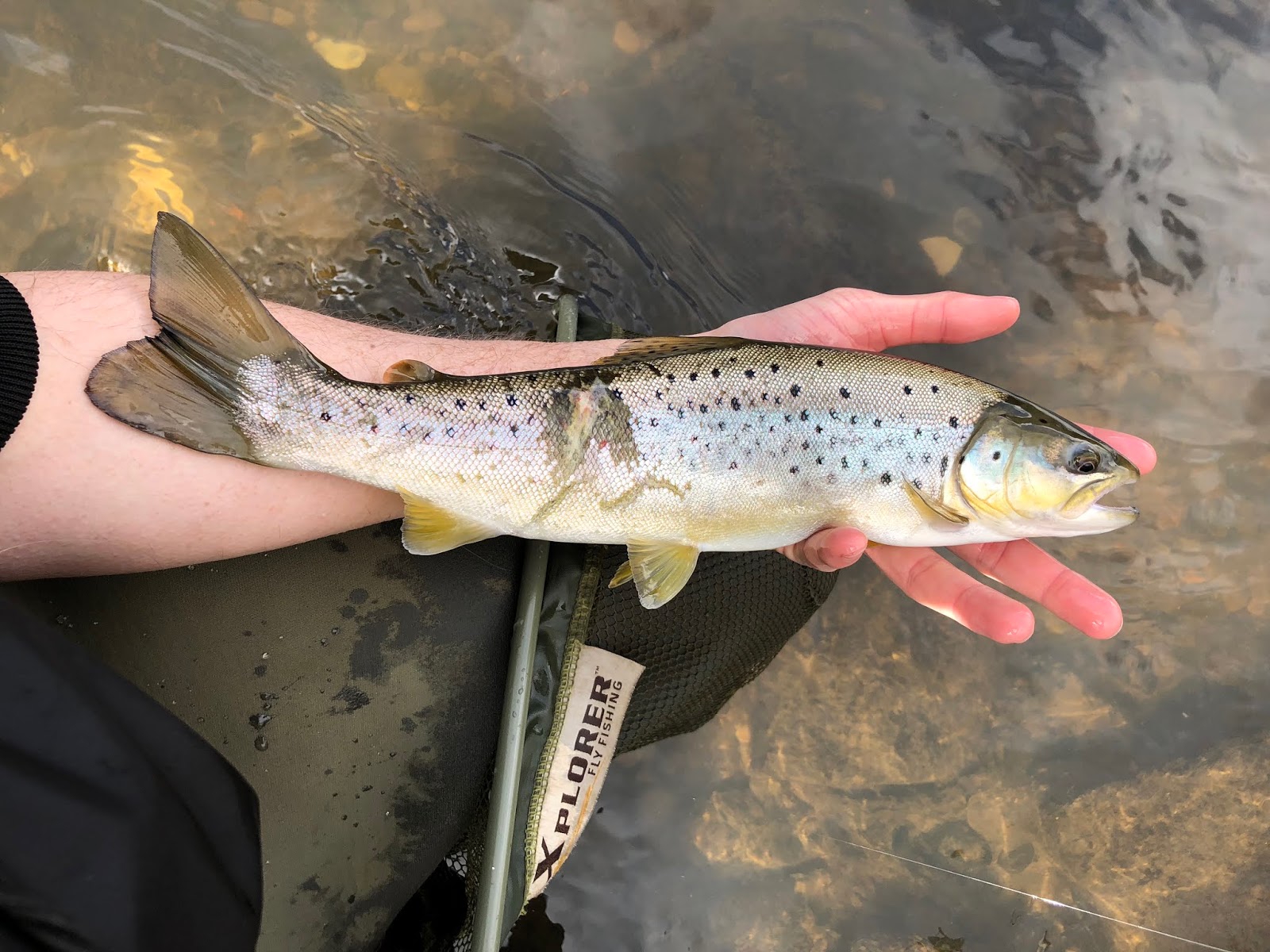 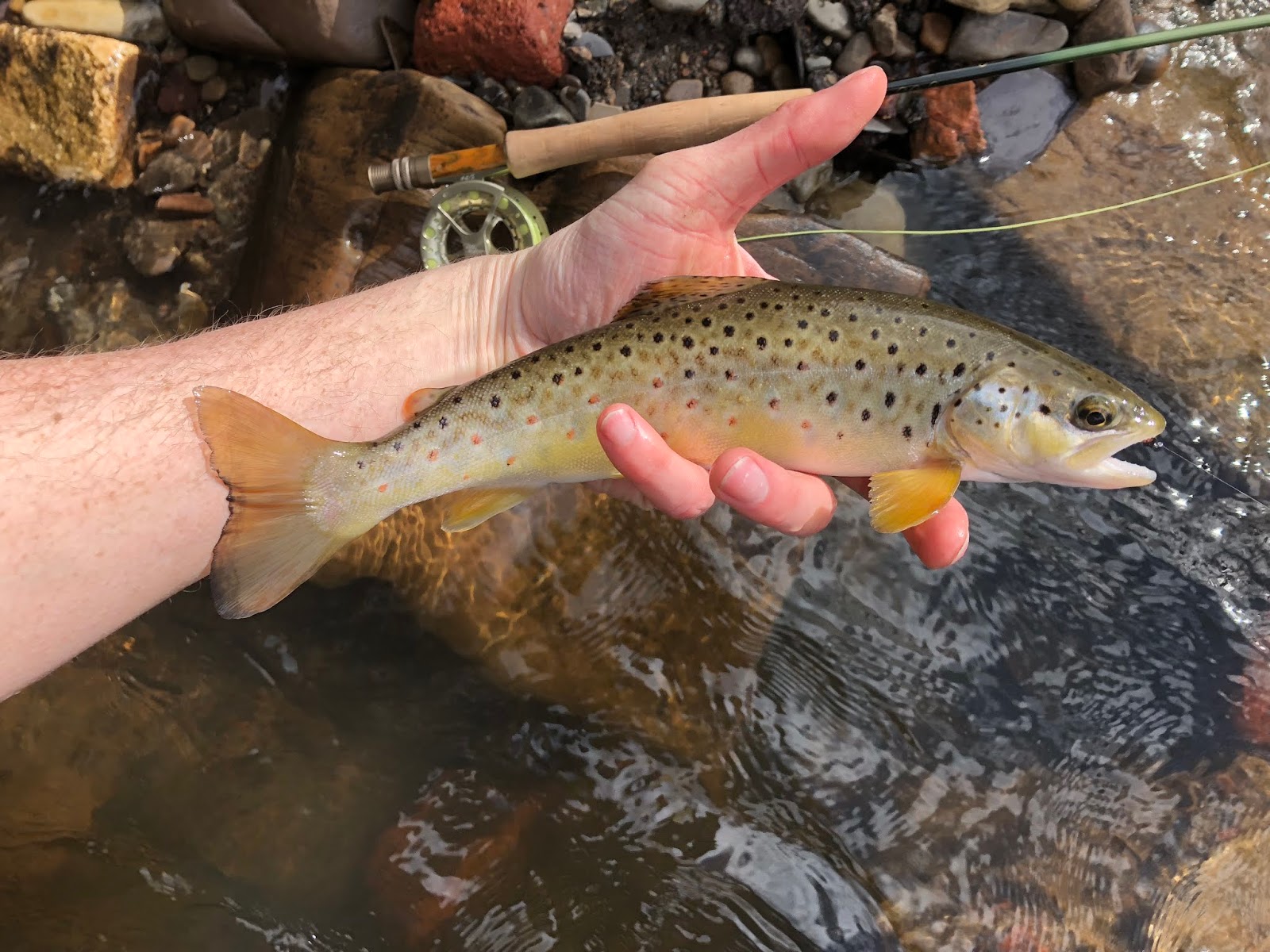