It had been a while since i had heard off Arthur Hamer, he can be quite elusive when he wants to be, i guess the multiple methods of contacting people these days make it harder when people use different formats but it was a good old email that came up trumps.

Now Arthur Hamer was one of the first people i knew of in fly fishing, in fact he helped me indirectly to have the confidence to fish the Irwell and it's tributaries and also inspired me to do my own blog. Why? Well when i saw a trout rise on a family walk i googled around to find more information on fly fishing on the Irwell and who's blog came up as pretty much the only information on the matter? Arthur Hamers. We'd only fished together once before, back then i was fishing the Croal as it wasn't as daunting as the Irwell and was a nice little river to catch small trout.

Now i have experience but still in no way do i know everything about trout, if anything my thoughts are constantly changing with their changing behaviour which doesn't seem to coincide with any weather or conditions, on paper on the days me and Arthur went fishing, the fish should mainly be in the oxygenated pool due to the lack of rain and high temperatures, when in fact it turned out quite the opposite.

Arthur took me on a few local rivers he had cards on, as a guest. The first trip we had we both used streamers and it was a tough day, 25' temperatures made the fish lethargic but they were not in the moving water, i missed a trout in one of our first runs and for an hour or so everything was quiet. Then from the bank under my feet i saw a big trout swim out and go towards my streamer, very slowly it approached it then slowly turned away. I lifted, maybe too softly, and i felt resistance, it had taken the streamer. It was then it began to fight. I shouted to Arthur as it ran downstream towards him under a large over hanging tree and i told him i had to jump in, it was impossible to tell how deep it was so it was vital i told him this before i jumped. Luckily, silt included, it was just under my waist and i had more control over the fish. After it ran downstream it reached a shallow section so it turned back towards me and the troubles began.

With the rod directly pointing up as the trout swam past me the rod got stuck in the trees above and i frantically pulled to free it. The trout was heading towards the snags on the opposite side and as it got their it became entangled. Tired from the fight and tangled in a snag it turned on its side, it now became a matter of urgency, i hurriedly crossed the river, sinking slowly into the silt before impaling my waders on the submerged roots of the tree, i felt water coming in but i had to ignore it. Reaching the trout i netted it and was able to get it in the main current to aid in its recovery. 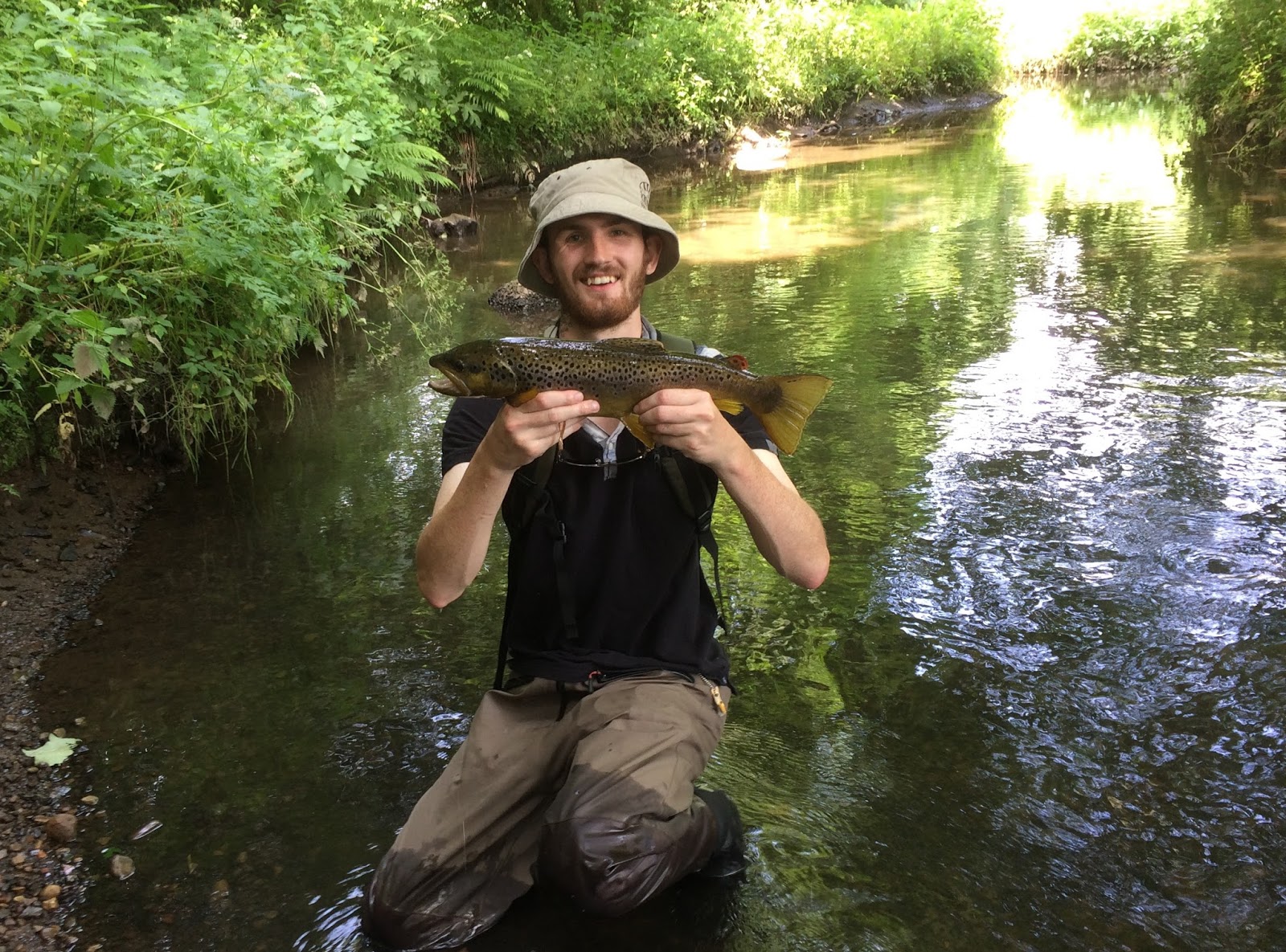 It was a big trout and we let it recover before we took any pics, this allowed me to get my scales out for the first time and weigh the fish (i usually go off length but thickness of trout varies massively) It came up 3.96 on the scales with a wet net weighing 0.38.  It was a great moment for us both just seeing fish like this in our system and we could of easily called it a day after that. We slugged it out for another hour without much happening before i had one last pop at the fish i missed earlier, it took it again first time but after a couple of seconds on the hook it slipped off again. 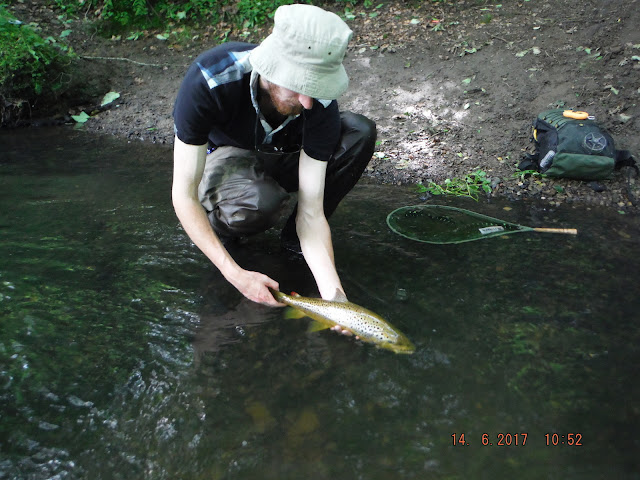 The next time we went, waders fixed, it was very different experience. We was higher up the system were a 12 inch trout was considered a good trout and with even higher temperatures i had again anticipated fish to be in the faster water and aimed to target them with nymphs. Reaching the river it was alive with rises and it soon became apparent it would be dry fly only.

It was only a narrow river with over hanging trees, my 9ft rod a little too big in these situations but i had to make do. There was hundreds of rises but they would disappear when you was 40 foot away before you'd even cast. Only for a non rising fish to hammer your dry off the top. I caught 6 fish with the biggest just under 10 inches but i missed numerous fish, be it because of their size of the fact they appeared to be taking flies just under the surface, as there wasn't anything on the water. It fact, after i lost my klinkhammer the takes were a little more wary. My eyes became adapted to the water and i could see fish rising up below the Adams and rejecting it, the shallow summer water making them a lot more suspicious of a fine line on the surface. I lost 2 fish i'd say were over the 12 inch mark as the soft takes made setting the hook a little tougher. A simple jump or head shake would be enough for the hook to come out.

It was all good fun and it was good to be out with Arthur, constantly sharing his experiences and having a laugh all day, it made targeting these tricky little trout all the more enjoyable. 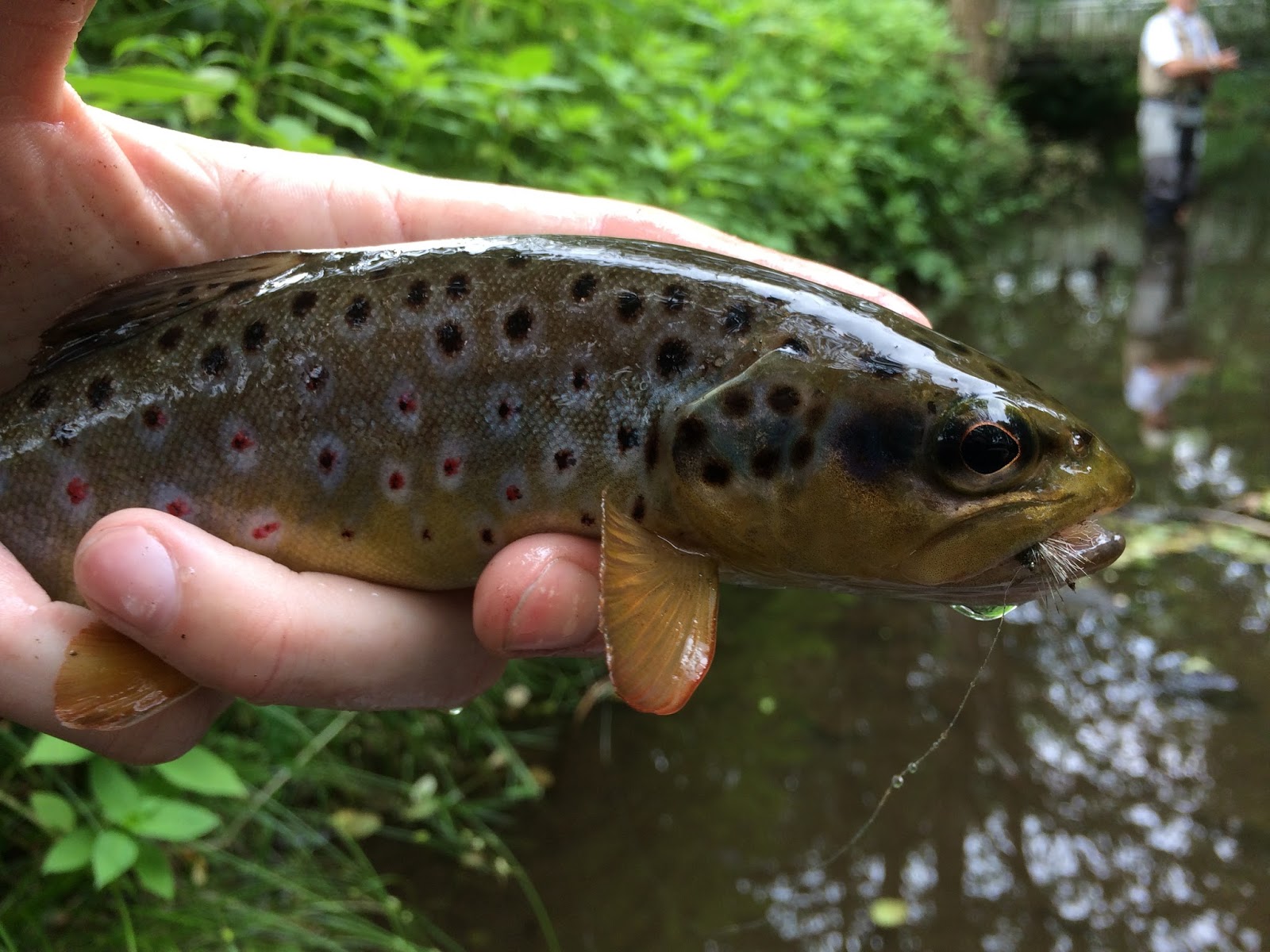 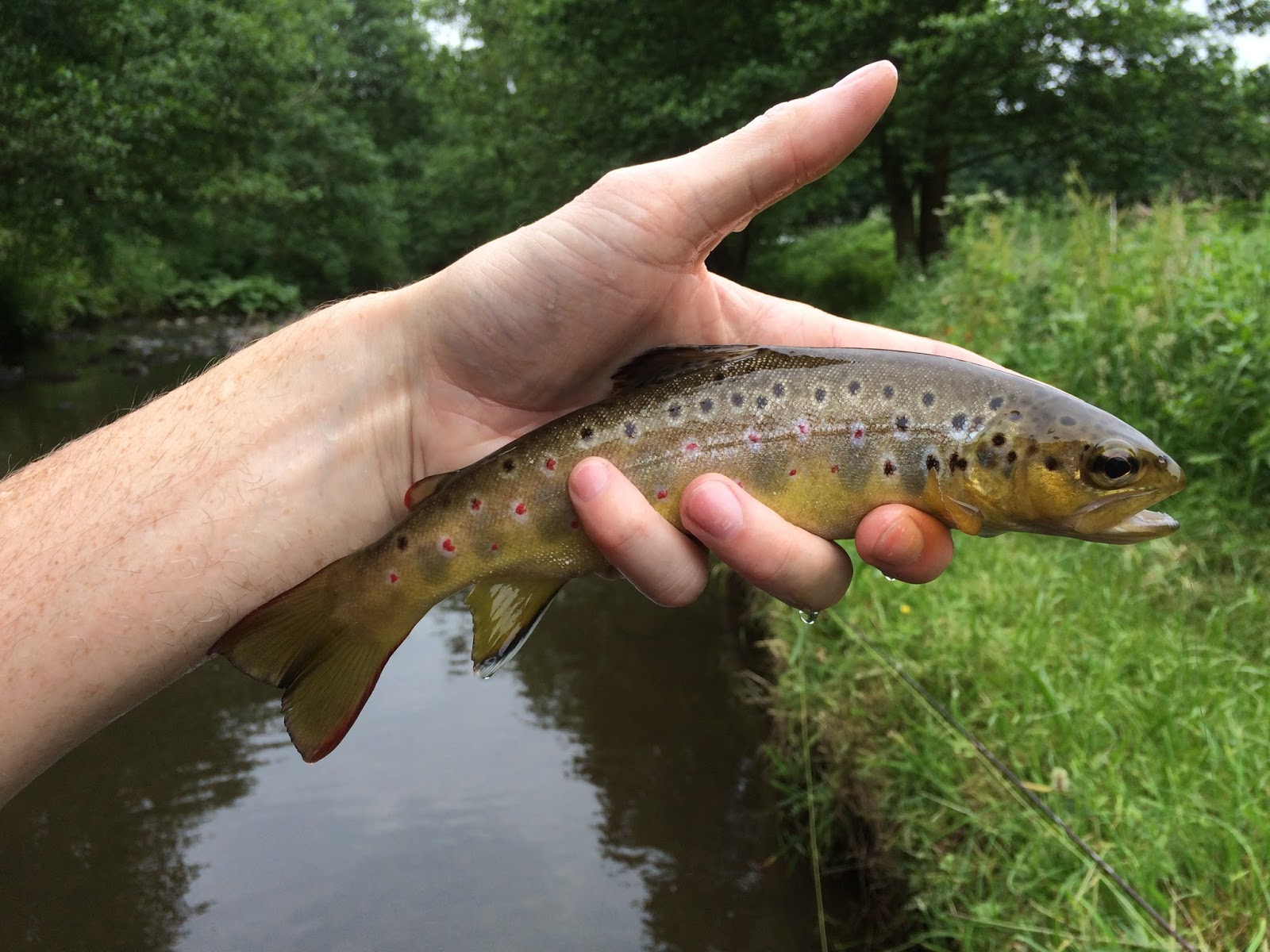 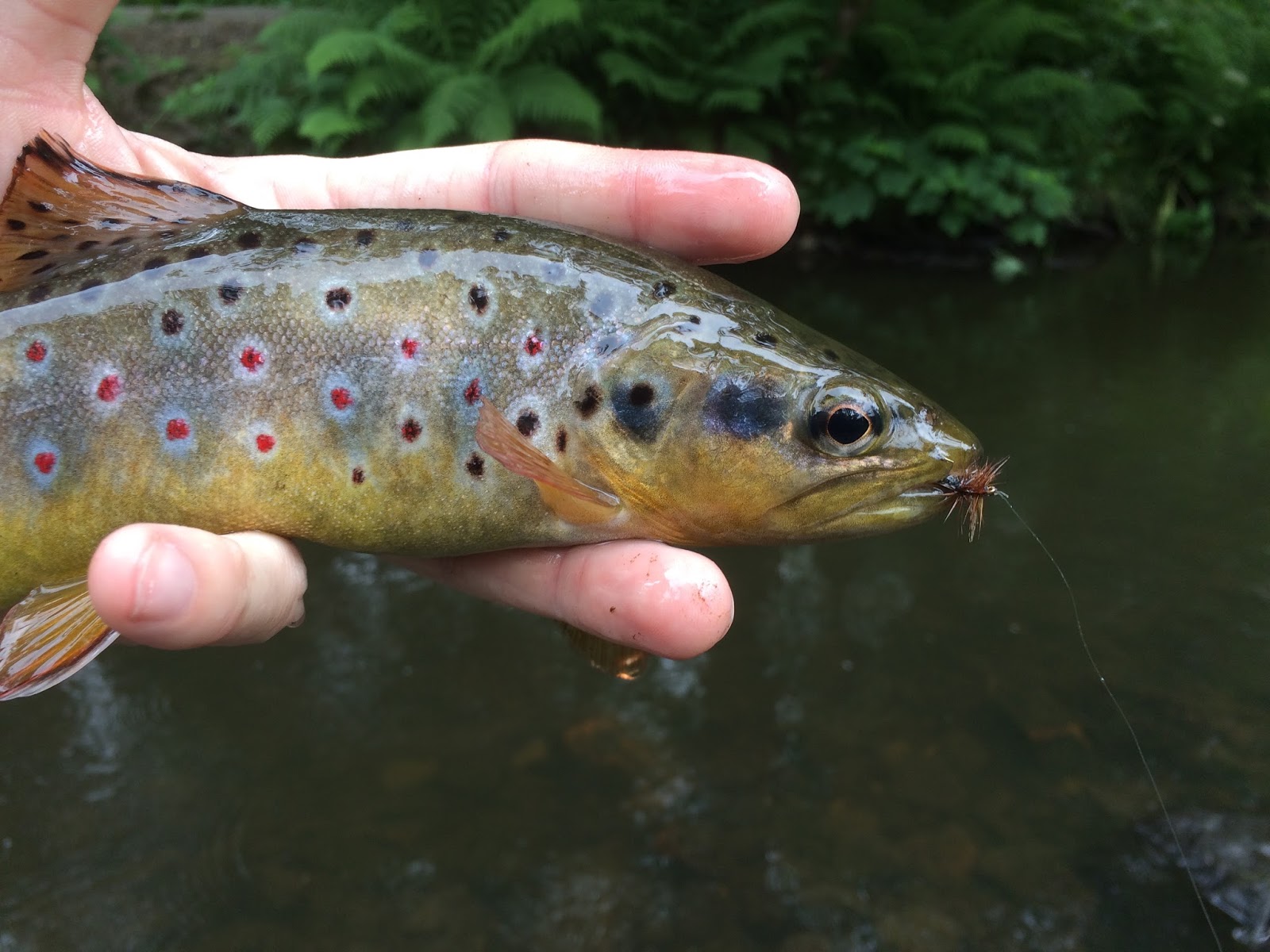