With a trip with John Tyzack planned after his wash out chasing sea bass, it was on the cards to chase some big browns and put a smile back on JTs face. JT had a place in mind, a river he knew held big fish but with just a short session possible before i had work we knew there would be a fair bit of leg work. The weather was funny and while i waited for JT to pick me up it hammered it down for 5 minutes before clouding over with a cool breeze. It would soon change to a hot sunny day after we overdressed for the occasion and we were left regretting our choice especially with all the walking we would have to do.

The water clarity was murky but still had plenty of visibility, it rendered sight fishing almost impossible but did it render us invisible? Probably not. We worked our way upstream and i was quickly into a small trout, we didn't take a picture as we was chasing big trout and off it quickly went where it came from. As we worked our way upstream we were getting the odd flash and tail slap but nothing definite, but there were less takes than we expected if you had seen the areas we was targeting.

As we worked our way up JT seemed to be getting the bigger fish to attack but still no end product, we would only see the trout as it hit the fly so we were in a way on edge. John soon landing a decent trout but it too was quickly put back as it wasn't the size we came for, another soon followed a little bit bigger but had beautiful markings with it's big red spots. Where was all the big fish though?

We soon came to a small weir were i cast into, the fly had barely touched the water, in fact im pretty sure it landed straight into a trouts mouth, as no sooner had the fly hit the water, it felt like i had snagged so i lifted up and realised i had a trout on. It took off downstream running under the undercuts and the roots so we both jumped into the river to get a better angle on it. After a tough fight it was almost ready for netting, then JT uttered the fate tempting words 'it's well hooked' and as he went to net it, it came off. We looked at each other and laughed, it was a nice fish about 1lb 1/2 - 3/4's but JT had a better look at it than i did so you would have to ask him if it was nicely colored!

The next bit however was a motorway tunnel which i was quite apprehensive about going through, it was dark, long and deep, the worst part was the random structures under the water that jutted out from the shallower side forcing you into the deeper channel. Being a non-swimmer i allowed JT to take point so that i knew if he disappeared not to carry on! It was a bit nerve wracking for me to be fair, there was no current here but the inability see meant i was feeling my way and you would suddenly hit these big concrete structures under the water and other things. But after the water reach up to the top of my waist waders, which i had forgot i had on we was soon out and JT cast into the first bend, missing a pretty big fish.

Carrying on upstream we found a small patch of ranunculus which JT cast to and then we saw it, a big old trout came out to see what we was offering. Another cast it had another look before slipping back under the weed. JT tried again and this time it followed it, i saw it turn on it and JT saw it grab the fly, he struck and we was in. It fought hard and tried to get to the weed beds, trying the next one each time JT pulled it out of the one it had gone under, the bunch clenching moments your line cuts into a huge run of weed and your expecting another 20kg of weed snagging onto your fish but he kept his rod far to the side to pull it back under and after a quick turn upstream it soon tired and JT netted it. 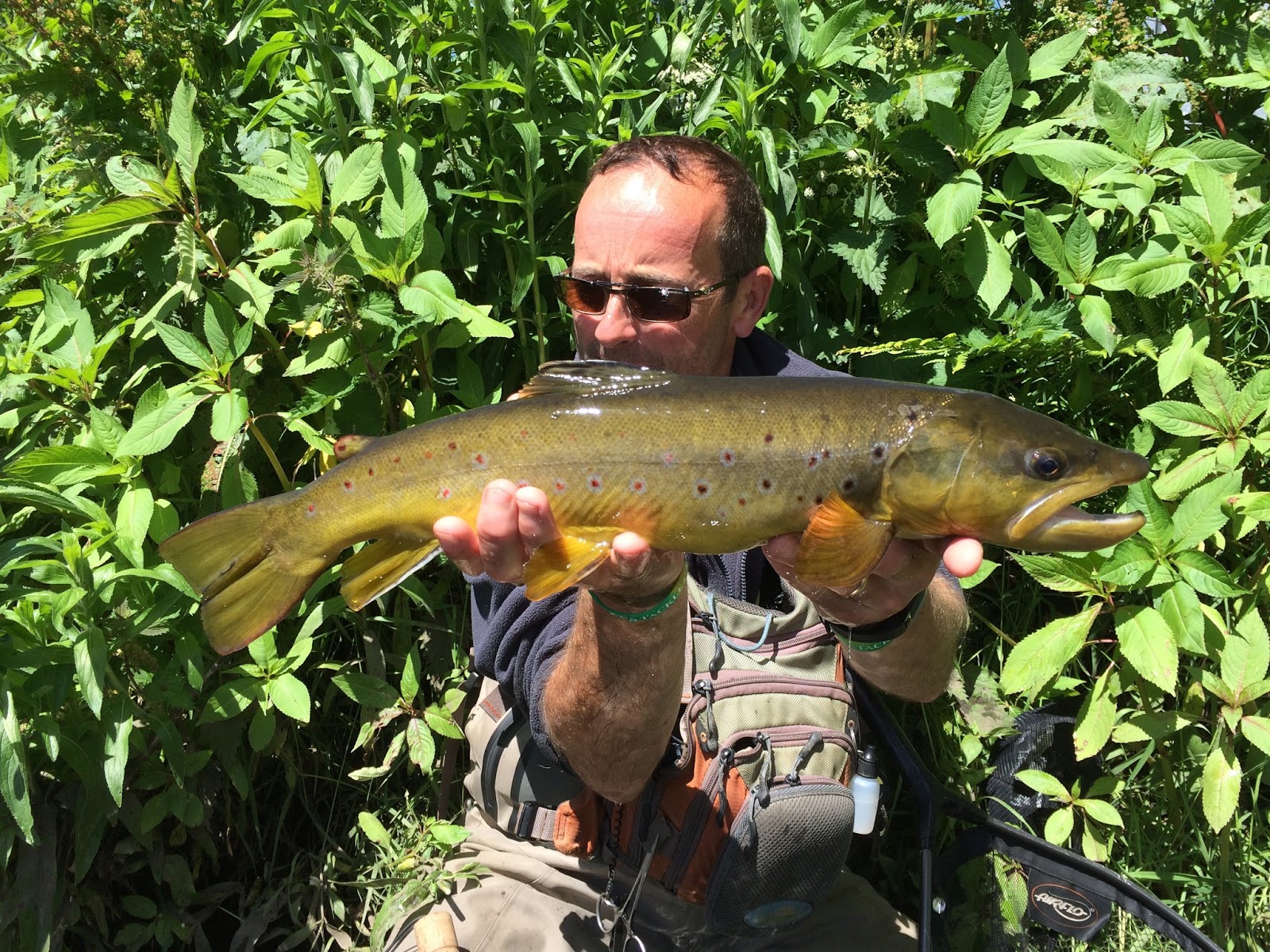 It was a cracking fish easily 3lb in my books. It had the head of a python it was that big, a strong old fish that was in immaculate condition, with a yellow belly slowly transitioning to a olive colored back it was a true horse of the river. It rested next to us for 30 seconds or so as it got its breath back and it soon sauntered off back under the reed beds we had pulled it from 5 minutes earlier.

The next hour went by without much happening until the last pool i fished, after pulling a small but beautifully marked fish out we prepped it for a pic but it slipped back into the water and we JT told me i had pushed it back in as i congratulated him on actually netting the fish time. It was all good banter and i soon had a picture of a fish minutes later, which we thought was the smallest in the river until the next missed take by a trout barely longer than the streamer.

We missed several fish and caught an absolute lump but on another day things could of been alot different. The fish we not turned on as much as we thought they would of been and several factors may have come to play into that. In all though it was very much worth it and it meant JT had leveled the scoring on who had the biggest fish of the day. Don't tell him i'm keeping score though! 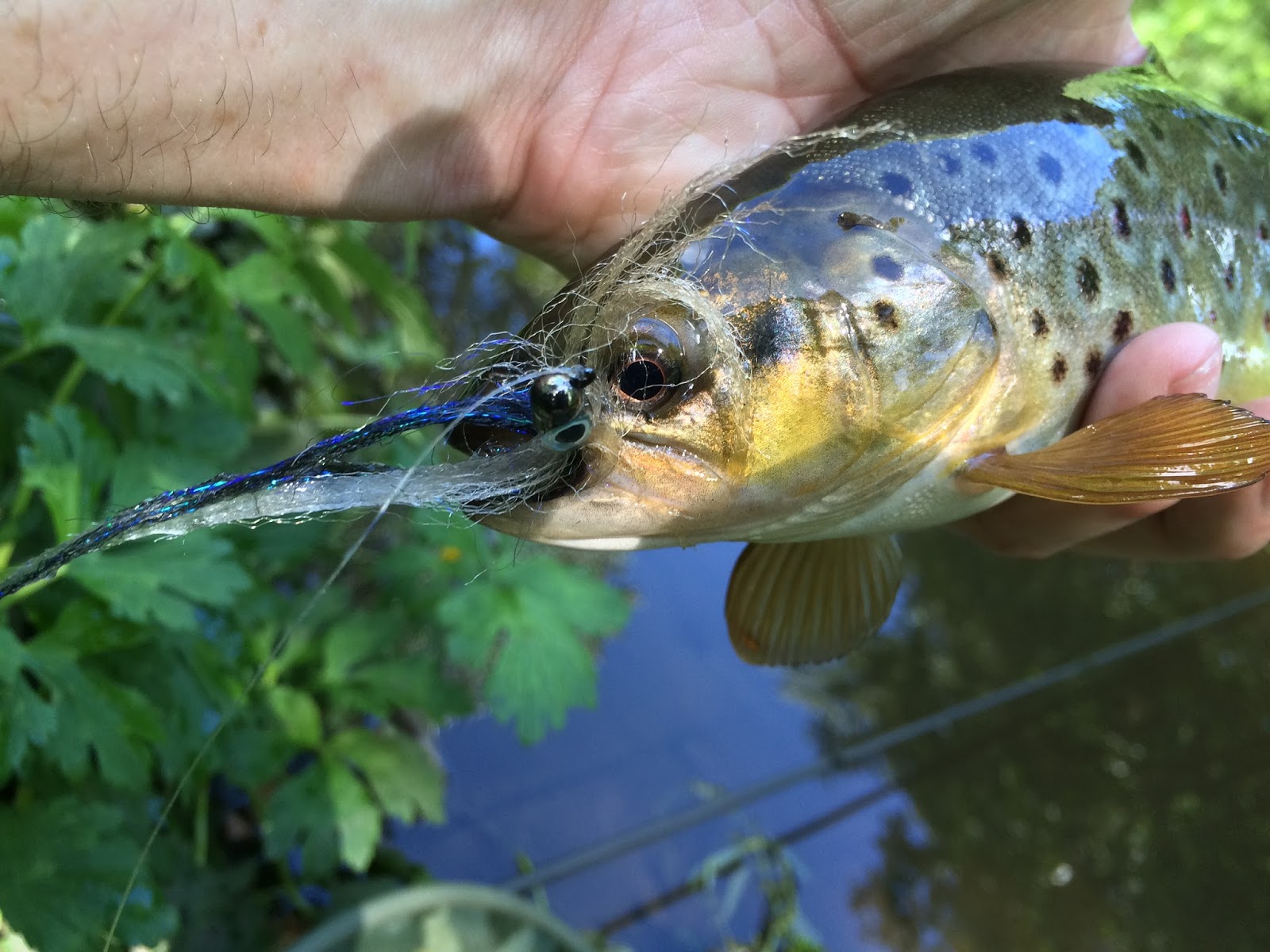