Fly Fishing - The Bad, the good and the damned ugly

It was a cloudy muggy day, ideal really, keeps people away who are planning on dipping their toes in the water and if they knew what went in there they should!

The bad: I set up ready and had tied 2 nymphs on, the wind had picked up a little but the water was clear so i planned nymphing at a distance. This went horribly wrong before i started. My hook clipped a single knotweed plant as i went to false cast and as i pulled, like we always do, to pull the hook off, my rod snapped. The top foot of my Wychwood SLA that had held it's own against monsters of the deep was defeated off a lone knotweed plant. Even the line didn't snap so i knew it was sabotage. I blame the Mrs!

The good: So i thought "hell, sod it" and decided to continue nymphing the best i could.  Popping on my deadly duo (one that's in high demand and the other is a secret colour combo) i was soon into a nice trout, which look liked it had been watching geese fly off the water as it skipped along across the surface, hell it was something else fighting it without my tip action, like a stiff bamboo cane rod with a reel. Casting was awful as it kept wrapping round the top of the rod and i had to unwind my rod fighting the fish but in the end i won and netted a nice fish. It was now a worthwhile trip regardless of the snapped rod. 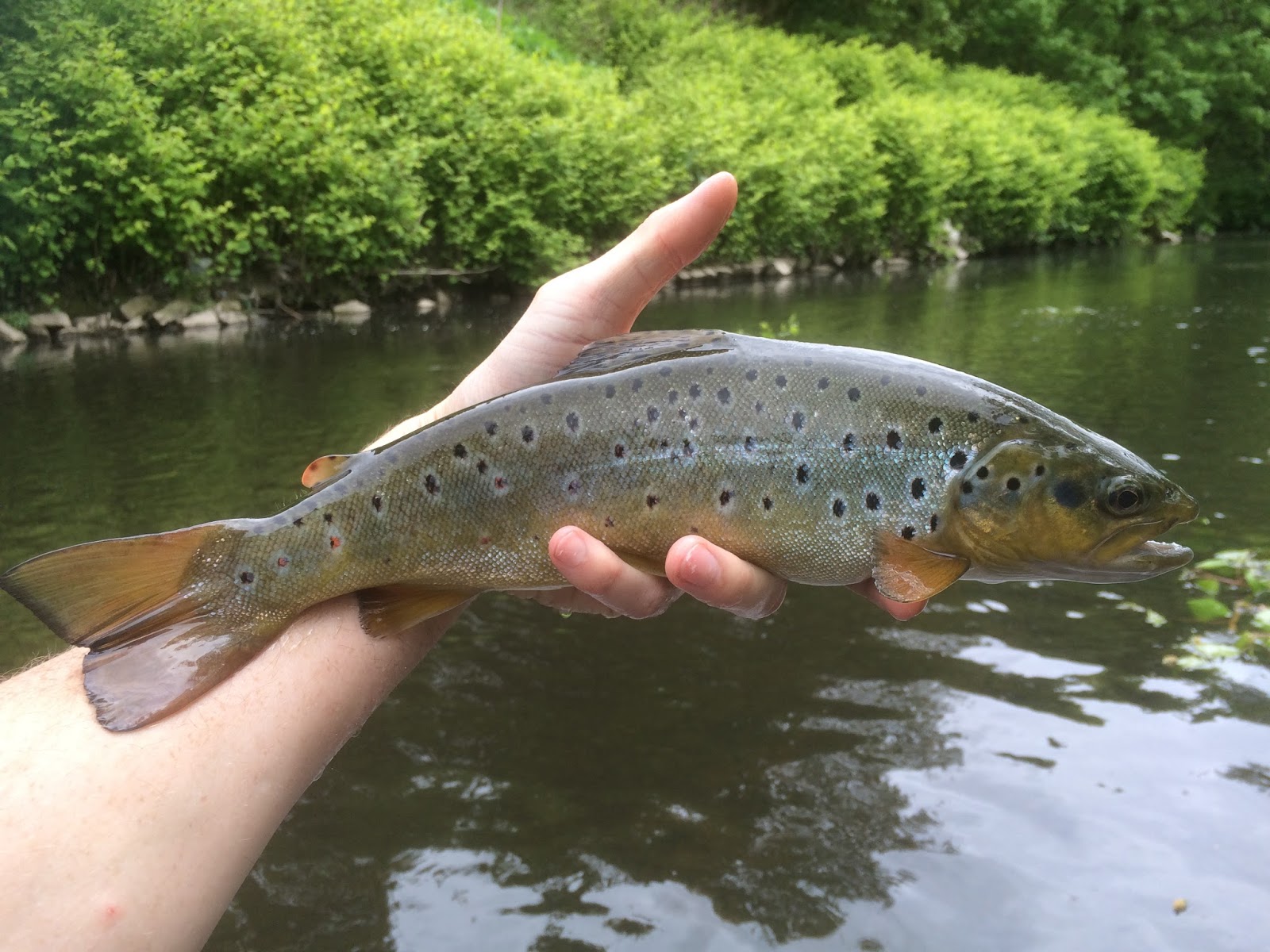 I cast again into the feeding lanes when, i now have my prescription poloroids and they are like x-ray goggles, i spotted what looked like something lift slowly out of the water so i watched and there it was a dark olive colored shark fin of a mouth breaching the surface with barely a ripple, now my experience with these rises are these are the bigger ones, the craftier killer ones, who go about their business invisible.

I tied a dry fly on, rod in whatever condition didn't matter, i was game for a bit of fun, i saw it come up slowly and could see it's head clearly, it was a 'big one' maybe not as big as the one i lost twice last year but definitely worth the effort. Even if you was just walking the dog and had to throw some dog fur tied to your lead at it, it was game.  The water was full of tiny little white midges, thousands of them, how do i compete with that? So i strapped a size 14 white olive on to say "hey, fancy a big midge?" i cast waiting for it to rise, it didn't, it wasn't giving it's position away as it was a pool roamer. 6th cast i saw it rise up from the dark depths, i knew i had it before i felt the hook hit into it's mouth.

The atypical splash, the only thing i can compare to an obscenity that the trout gives off. Down it went deep, i turned it and saw a flash of its long flank, it's power fighting purely against my arm strength as my rod held stiff without the tip action.  I thought that was the only thing i had to worry about, my strength and stamina, then the line snapped. The 6x i use couldn't handle the brute force of my bullying a trout of a greater weight, with no tip action the power was focused on the line and as soon as i dabbed my finger to stop it powering down and to turn its head, it gave. I wasn't too disheartened, with a fully working rod i would of been, but i had felt the raw power through my forearm of a big trout fighting for it's life, even though it would be treated with respect and awe.

After rerigging i switched to a klink and dink method, with no length on the rod it was hard to stay in contact with the flies and then the fishing got great.  I was pulling fish out here and there, losing them here and there too, to compensate rod length i had a long leader out and for some unknown reason they just kept throwing themselves at me, soon as the slack came, ping off. A couple shook their way off but i still managed a good 20 or so trout.  I stopped taking pictures due to the rain and just flashed them in front of the video camera. 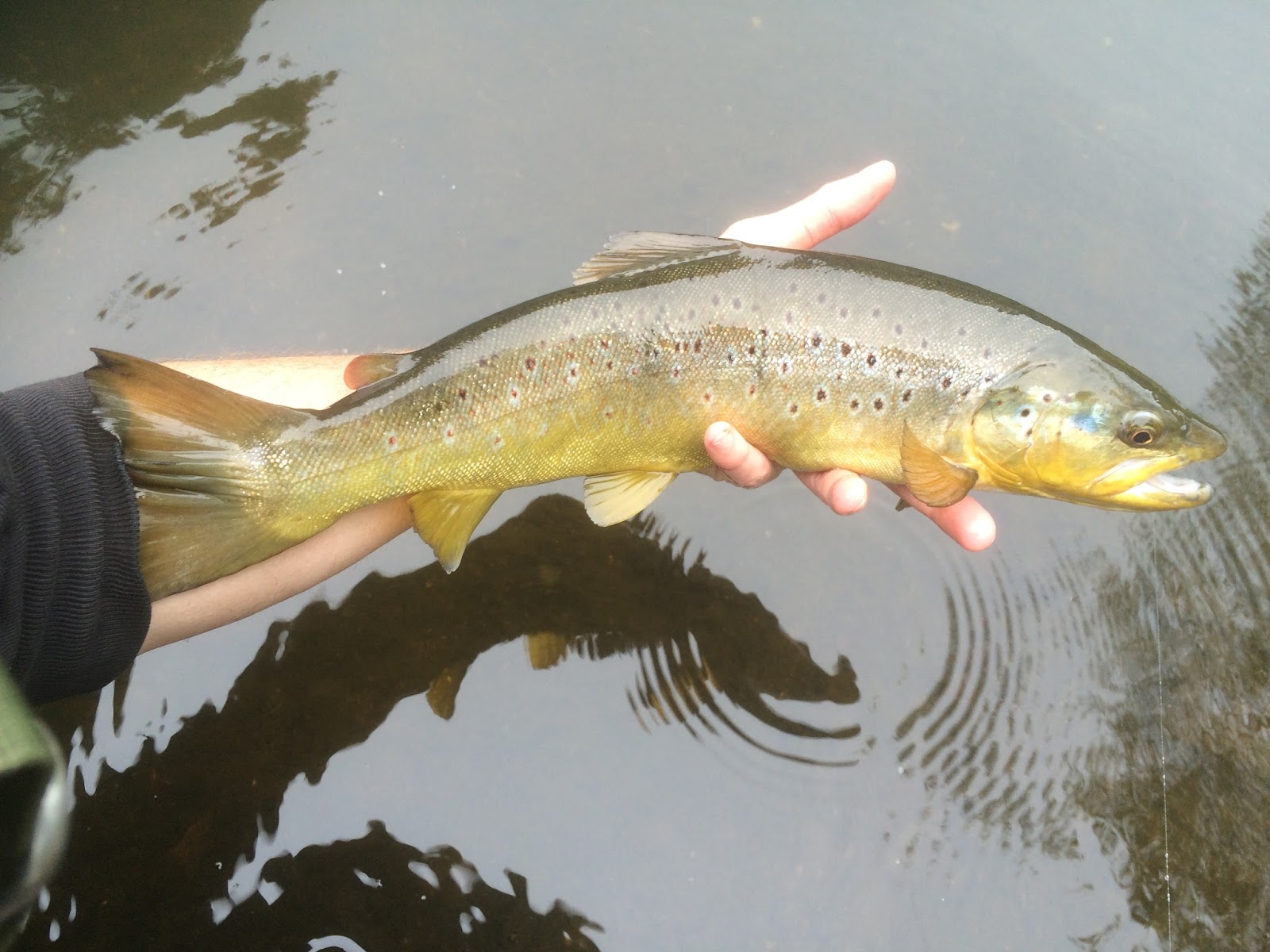 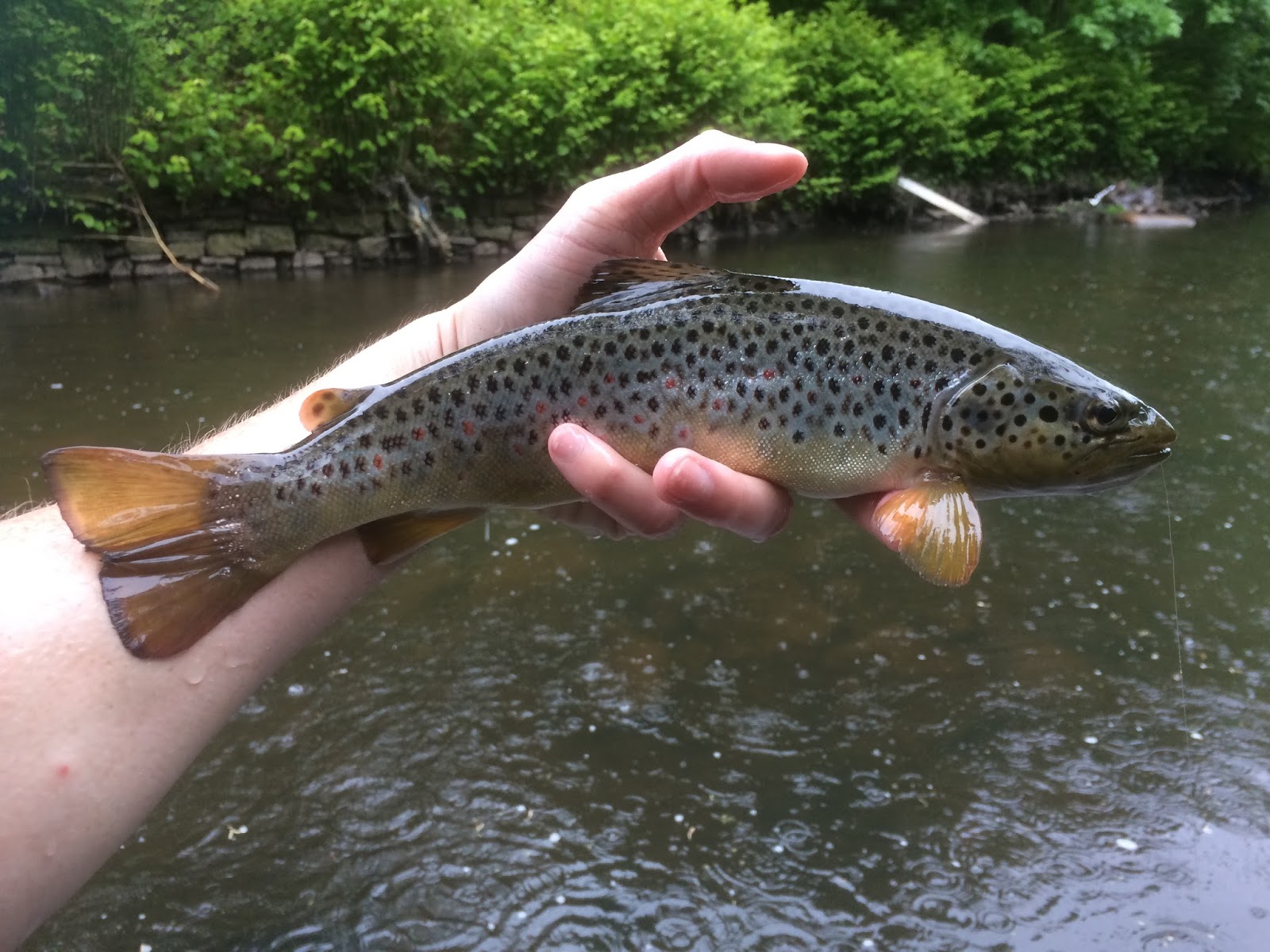 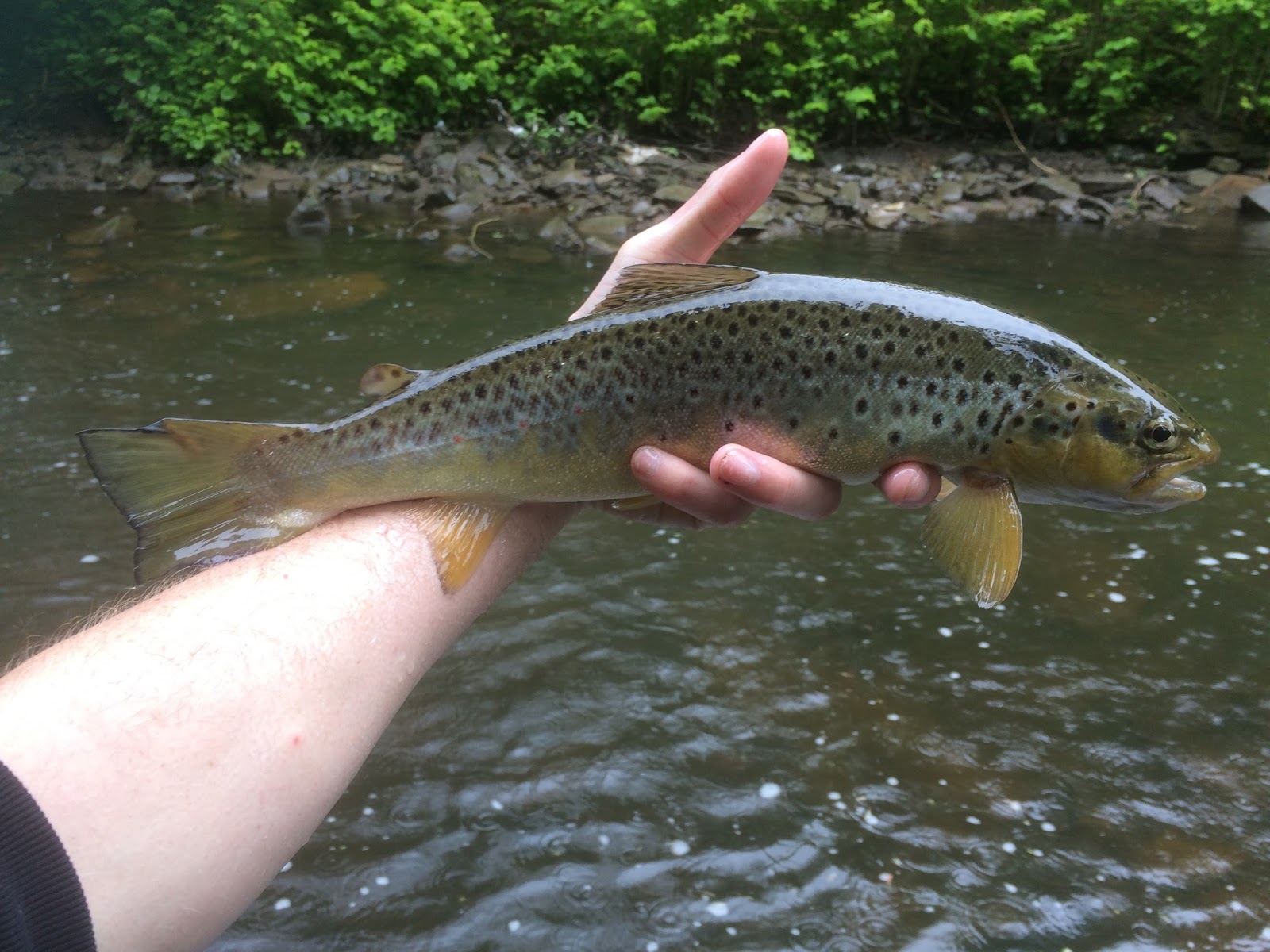 The ugly: i decided to walk up the a tributary to the Irwell on the way home and came across a outlet pipe pumping raw sewage into the river. It was a sickening sight and was reported there and then but regardless, it happened. A bad end to a good day. 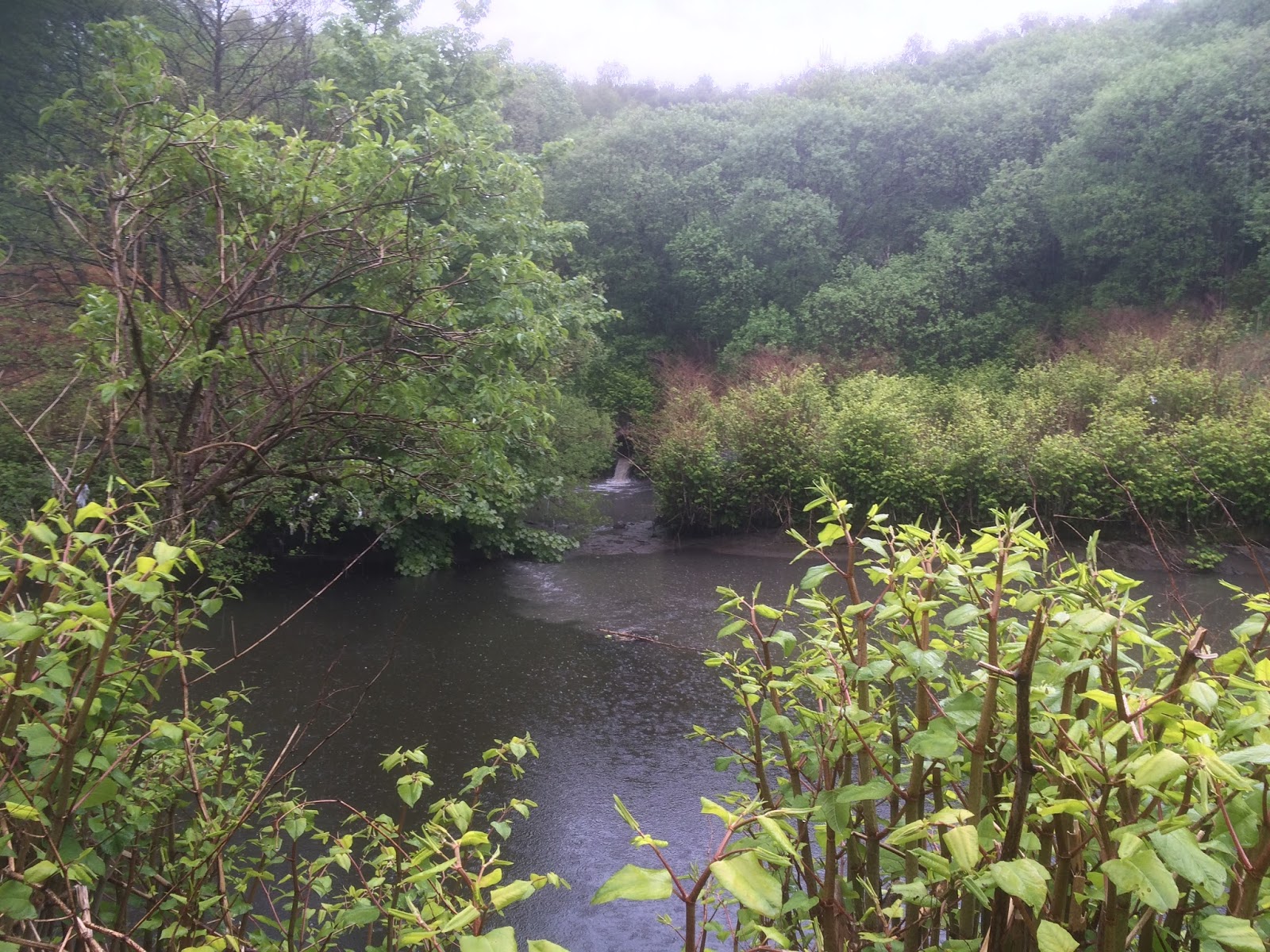