With a planned trip for Wednesday postponed a day due to high water, me and Arthur headed out to scout some rivers i had been dying to fish yet didn't have the opportunity to get to. The weather had been giving patchy showers which, if they remained brief, wouldn't have affected the water levels.

After setting up and Arthur having some issues with missing a couple of eyes on his rod, i had a couple of misses under a over hanging tree which should of held more fish but i persevered and only had 1 more knock. Arthur was fishing with the klink & dink method and wasn't having as much luck. However as we moved upstream into super fishy water, long deep channels on the outside of bends, over hanging trees and roots with a flow running into them, nothing. Clarity was good too, it was just over a foot visibility and a lovely tea brown.

We fished alot of pools with no sign of fish, it was frustrating somewhat as these pools should of held plenty of fish. However it was a river i had never fished before so fish density was unknown. But after fishing through a narrow weir channel and not receiving a single take i popped on a streamer and walked across the top of the weir. I was jigging it as i walked across, primarily aiming to cross to the other side when my arm yanked back. A fish had hammered it in the white water. It had hooked itself so i was unsure of how well hooked it was so i took it easy, heading back across the weir top to the calmer water to allow easier netting and was greeted by not the longest fish i have caught by no means but a very fat & healthy fish. It was a positive sign, a skinny fish would of indicated a lack of food hence the lack of fish but continuing on it seemed streamer would be the order of the day.

In fairness it wasn't my greatest day on streamer for hook rate, with the water being unscouted i would often leave myself with very little striking room with the amount of fallen and over hanging trees that littered the river, perfect for providing habitat. The river ran through some cracking deep pools pushing up against natural rock but most fish would hit the streamer from deep below, banging the tail end rather than the hooked body section. The water was still high so pulling it downstream would often be too quick and any takes were fishing chasing after it and grabbing the tail as it went past. One of the bigger trout i hooked and lost after a minute or so chased the streamer like a torpedo for a couple of metres, i flipped the streamer round to face upstream as i had reach the end of my reach and it must of grabbed it then, it mustn't have been hooked very well as it managed to fight it's way off.

We fished alot of water with the fish only hitting the streamer, i did swap back to nymphs but only had 1 fish take it which soon dropped off. But eventually we came to a large deep pool with a tree half submerged leaning across, i spotted a rise. Arthur was now on the dry, slightly frustrated from a few tangles he had had consecutively. I knew this would be Arthur's fish. It rose steadily as he cast to it, using an Adams, he covered it over and over but nothing, it just continued to rise steadily. I told Arthur to try one of my dries and as he rerigged i watched the rise. It was a very soft rise and seemed to be in a pattern, left, middle then right. As if it was one fish swimming around the pool. I also noticed it was knocking leaves which i found unusual as if it was looking for bugs on the leaves. I told Arthur i think it was a big one with the feeding habits it exhibited.

Ready to go Arthur cast to it, a little close to the tree and began to work his way up, i told him to cast a little more central and it rose right where i pointed. He cast to it with precision, the back of the trout touched the surface behind it as it came up to have a look. He cast again, a little shorter, as i said it was a nice cast it took it. However, it fooled Arthur, as it had been swimming downstream when it took it it continued on its path towards him as he stripped line back. Arthur thought it was a tiddler, one of them small trout you strike into and drag half the distance on the strike. Though as Arthur recovered his line and it headed towards shallower water, it turned. Still no sign of it, it headed upstream taking line as it went, not very fast but with strength, hugging the bottom which was around waist height (on myself) It slowly swam diagonally across to the right, where it was a little shallower and would of been easier to net when tired, however it swam there for one reason, to lose the hook in the undercut bank. After realising where it was going i shouted to Arthur to catch up to it quick before it slipped the hook. But after pulling a matted mess of roots out from the under cut Arthur pulled his fly out with no fish attached. It had escaped capture and we had never even seen it once. 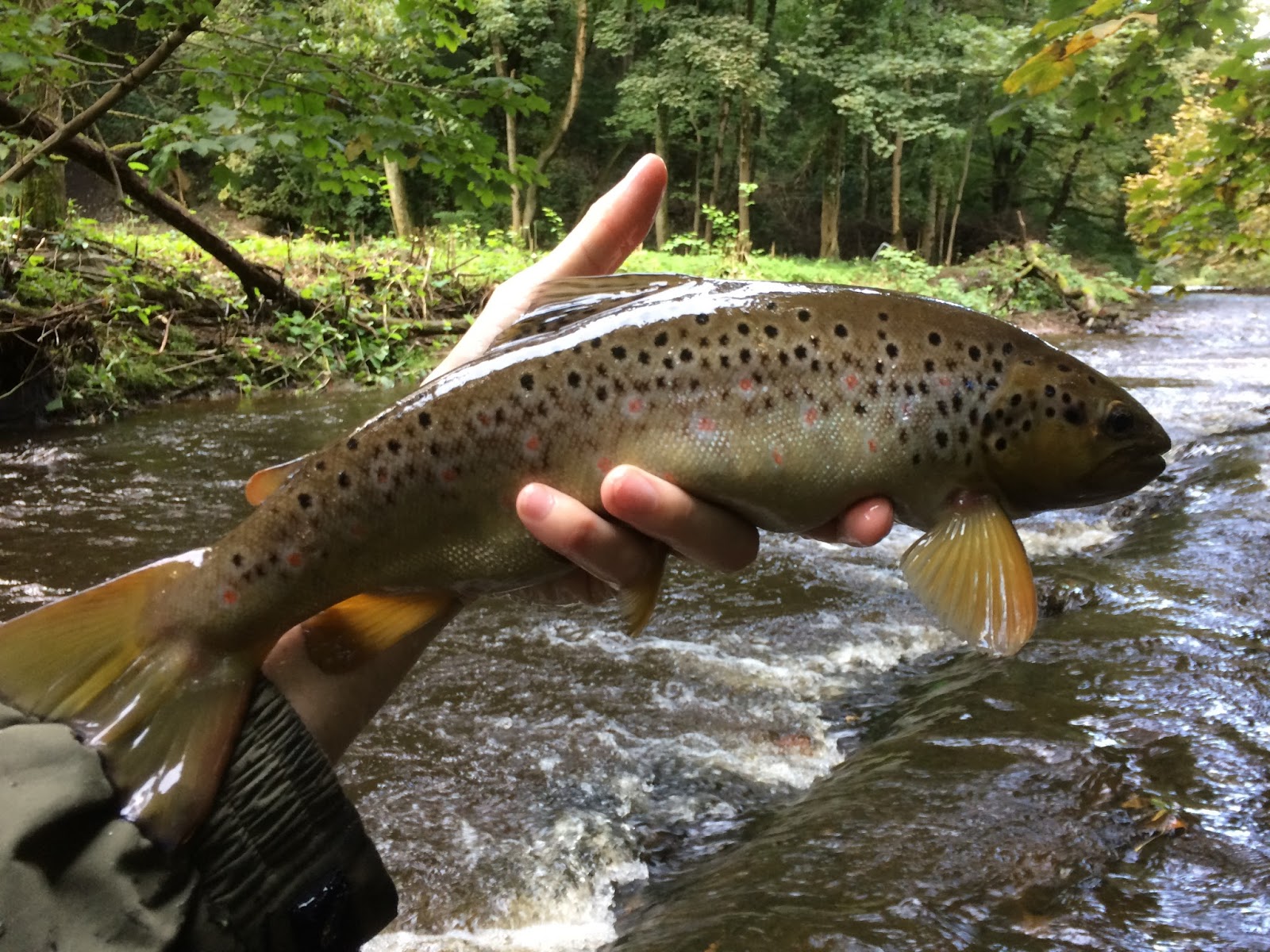