Fly Fishing above the Irwell Pollution

After some tough trips out on the Medlock and the Irwell it was now time to go above the pollution source on the Irwell, do a kick sample a few yards above the source and then find the fish, because in theory the fish should be there.

We went to Rossendale Treatment works where the pollution sourced 'through'. Heading just upstream of it towards the bridge we did our kick sample and we wasn't surprised to see a huge amount of life. From your olives to your cased and caseless caddis to the chironomids there were all in abundance. This is what we expected. 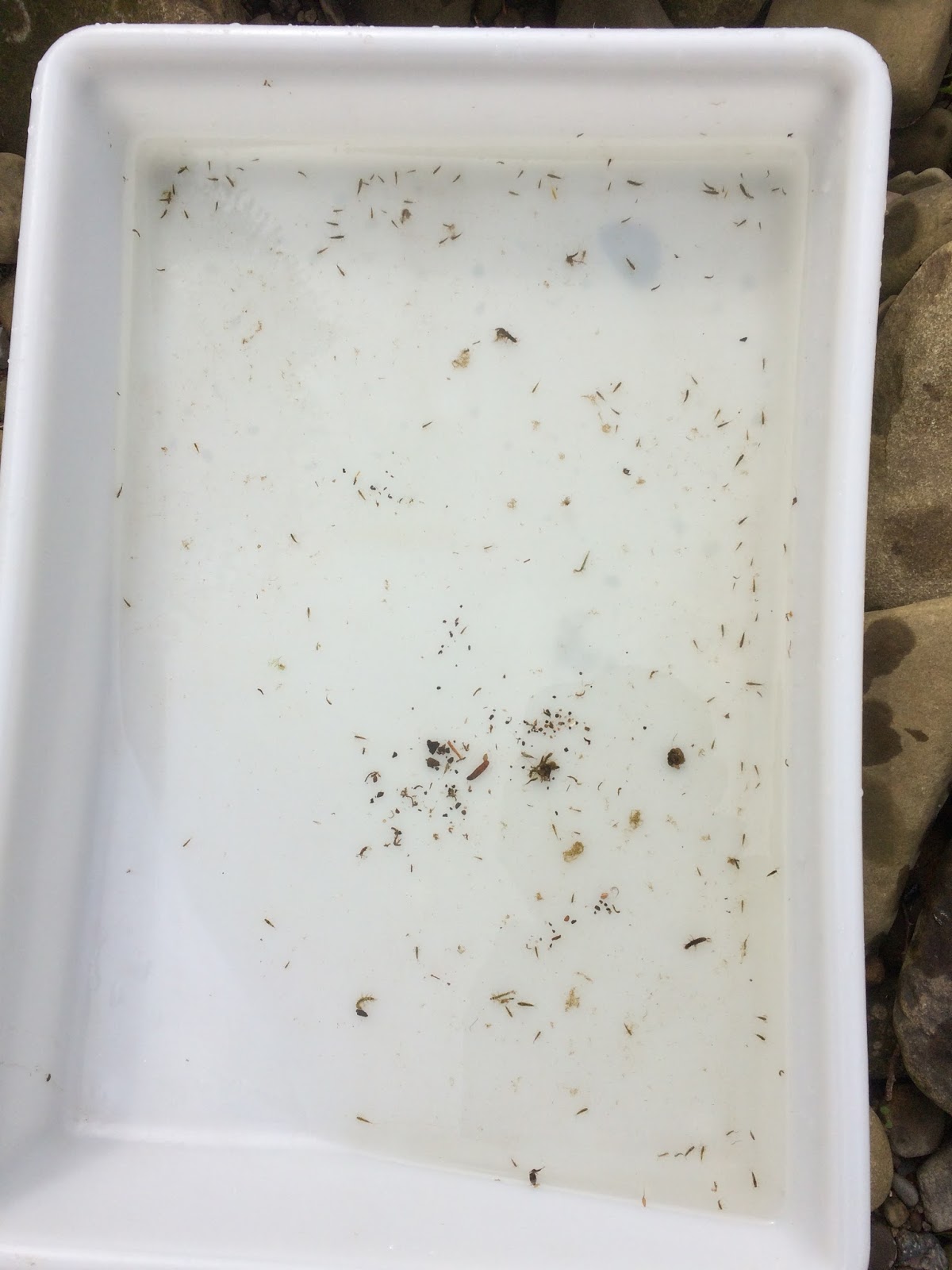 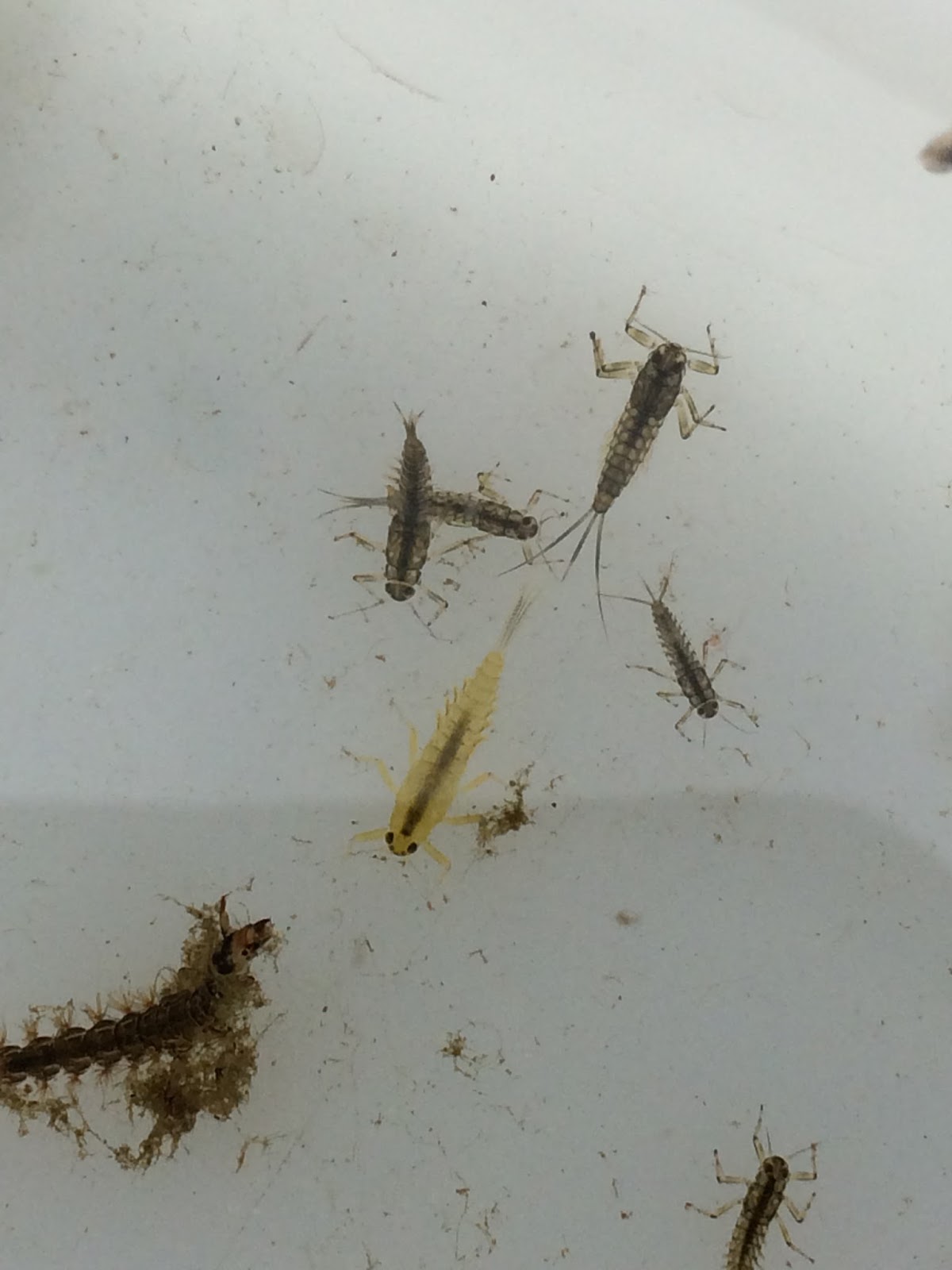 We headed back to get our fly gear and starting to head upstream, fishing our way up. We had to target pools as the river here was very flat and clear and only ankle deep but after fishing a few deep pools and seeing no fish activity we was starting to question our theory. There was plenty of food so where was the fish? As we headed up further upstream it soon became clear that alot of machine activity had taken place. A huge bank collapse near the railway line had been fixed with huge boulders which, in my opinion, won't last the winter. It would of been a massive feat of engineering positioning the boulders of this size here especially on the river bank so we put off fishing below this point by presuming the fish would be above it. 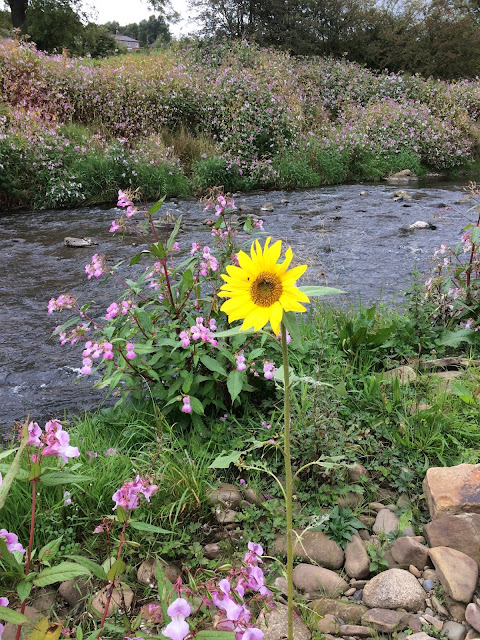 It was maybe 50 or so yards upstream when we saw a slight ripple in the water, was it a leaf? Or was it something swirling under the surface. I watched and waited. It did it again. We had found the fish. This spot was very difficult to fish with trees overhanging on all sides a cast was nigh on impossible but we persevered. They never rose for the dry fly, we tried to head upstream further but my foot slipped beneath me, taking me well above where my waist waders would be, however i had my chest waders on as they were still drying from falling in a couple of days prior. We had stumbled on to a clay shelf. Arthur tested the depth of the clay and his wading stick sunk almost a meter into it, without a sign of the bottom.  Retreating back we carefully we headed back onto the bank and worked our way upstream.

Finding the end of the clay shelf we hopped back in and i switched to my weightless nymph under the klinkhammer. The fish may have not been rising for the dries but taking the emergers just below the surface. The first pool we fished had a riffle running into it, not finding anything at the back of it i knew the faster water would only cause drag with the weightless nymph as it would fail to sink. Not wanting to tie my weighted fly back on knowing i would be switching back to weightless just after it i stuck a small shot on the line equal to a 2.4mm tungsten bead. Now i've never pretended to be a purist so that would disgust many purists but i'm hardly fishing chalk streams now am i.

The third or fourth cast into this faster water and i was into a fish. It was a small trout but i was happy, i had an Irwell trout after so long. It was good being back on the Irwell. the next couple of sections held very little water and we walked past alot of it. Perfectly clear, centimetres deep and no real pools for the fish to feed happily we walked on upstream. The first deep section we came to however had a dog playing very happily in it so we hopped out the stream and gave the dog a wide berth as we knew it had swum up and down the stretch. 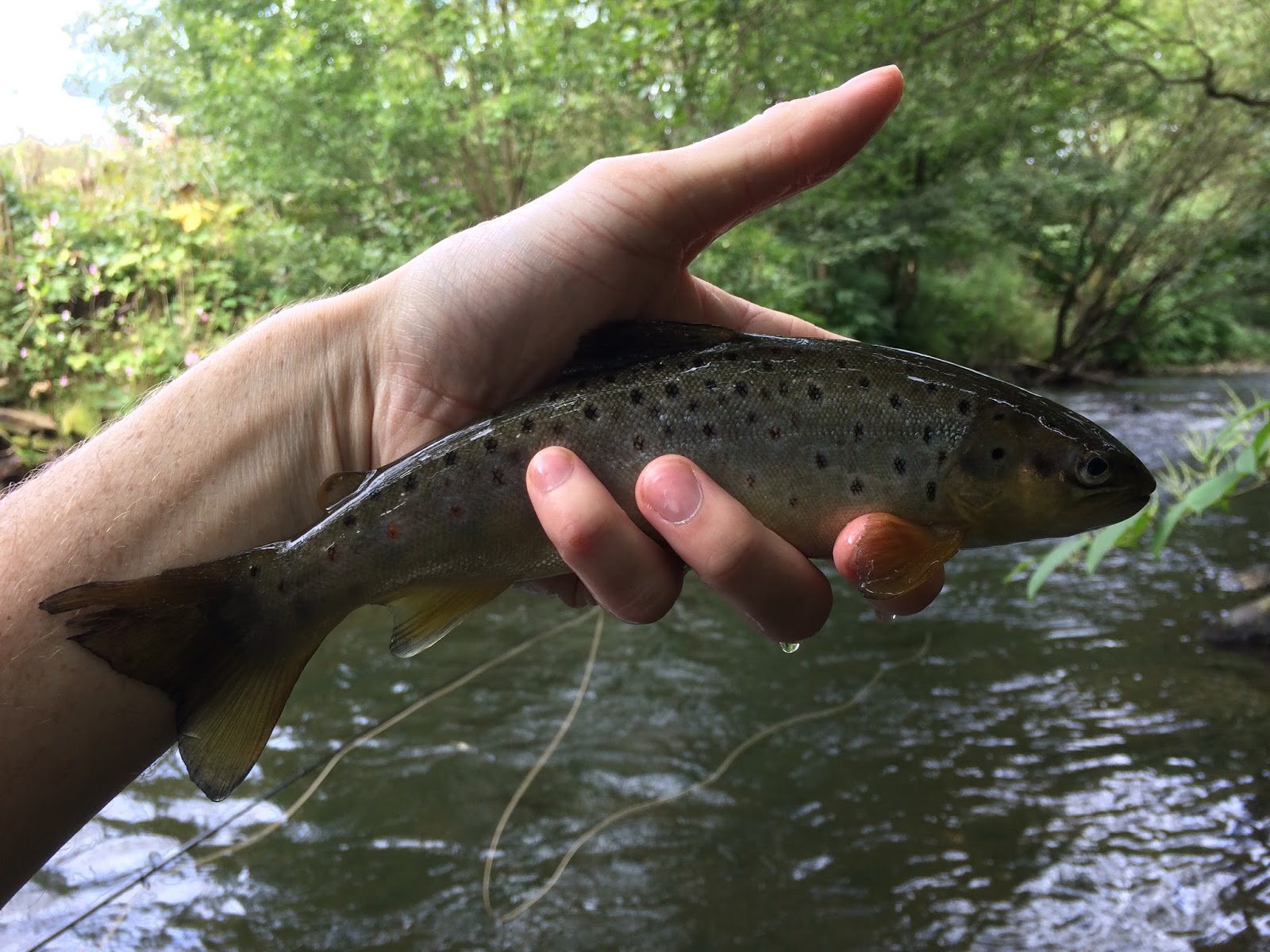 We found a small weir and it looked remarkably fishy, Arthur told me it was a dog hot spot and sure enough there were dog walkers around but a narrow stretch looked dark and deep as the river pushed against the wall, it was wire caged too so i knew it would provide good cover. Totally weightless again and much further up this small pool than i first expected. I got a take just as the nymph dropped out of the faster water. It was a lovely little fish which gave me a nice little fight too. Just above that a tiny mini pool rewarded me with one of this years trout, probably no more than 6 inches, perfection in miniature. 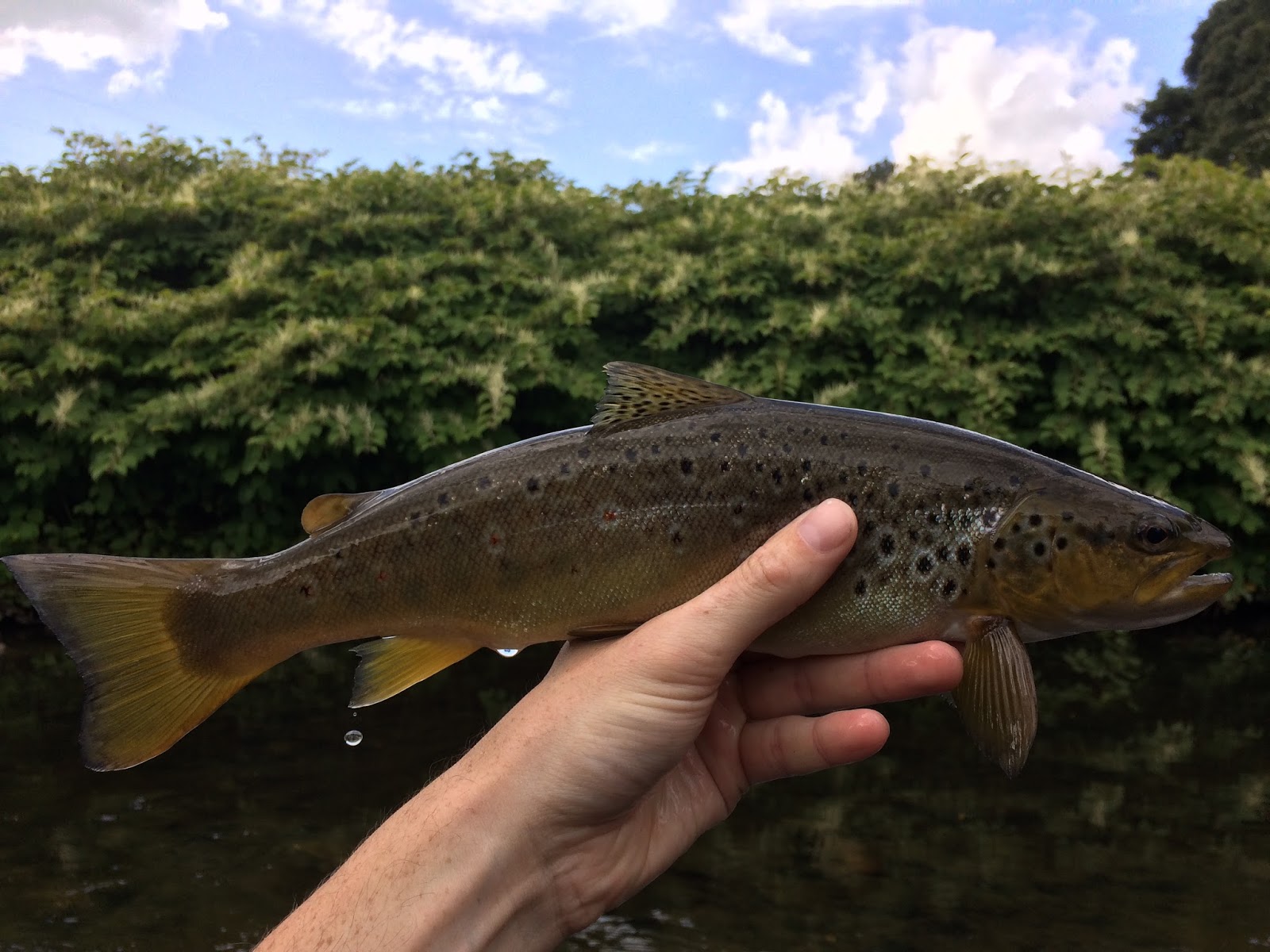 Above the weir was a long slow deep stretch which was strangely cloudy, unlike the rest of the river which was perfectly clear well over 3 feet. There was plenty of fish rising so i allowed Arthur to target them. He had yet to catch and here seemed his best chance. The casts weren't easy though, despite the width of the river, low over hanging trees and being on a bend the target to aim for and the back cast were very awkward but Arthur persevered. He would get the perfect cast and the rise had move up another foot or two, and we did this until he landed about 2 feet below the rise. As i was saying you was just behind it, a trout sipped it under, it was so delicate you'd almost not notice it but Arthur struck and it had already spat it out. It could of been a tiddler or one of the wise big ones we would never know.

After targeting several trout which seemed very ignorant Arthur handed the baton over to me. With the weightless nymph i could see if they were feeding just below the surface hence the lack of takes on the dry and to be fair there wasn't many flies on the water itself. I used the water haul cast in a way to help me fish as casting over my left shoulder was very tight and this allowed me to be more accurate, casting downstream to flick it upstream using the weight of the water. It didn't take long for the weightless nymph to come up trumps again. It was a beautiful little trout again and it didn't fight for very long as it tried to hide in the knotweed next to me it swam right to my feet. 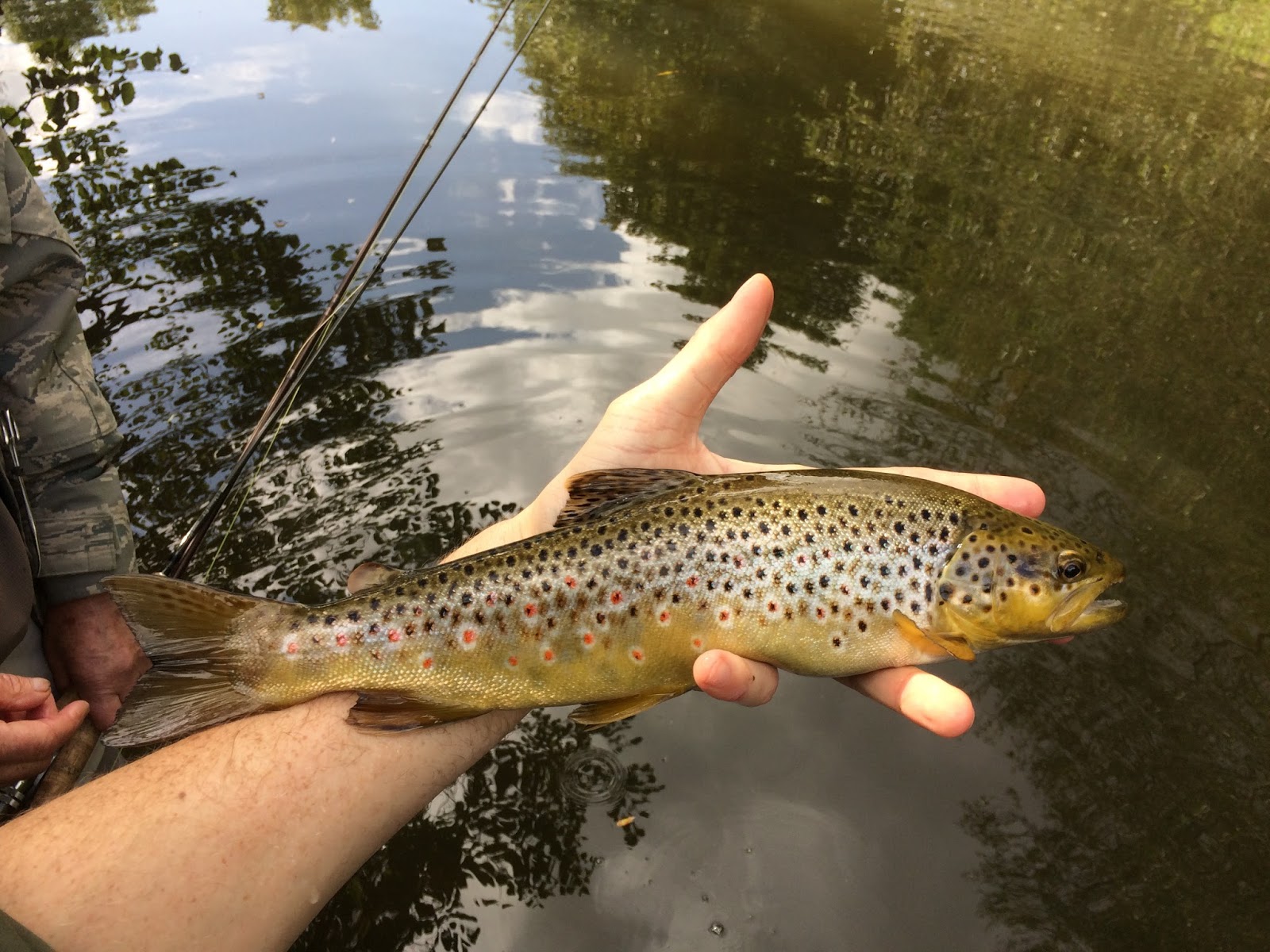 It was time to call it a day and we headed back to the car with a smile on our faces, I had equaled my yearly total thus far for fish on the Irwell in one day, which shows you how dire it has been. On the way back to the car i spotted some line in a tree glimmering, doing my good deed for the day i jumped back into the river and with the help of Arthur and his stick managed to pull about 40 yards worth of 20+ line and a huge hooked lure out of the tree. It was a monstrosity to say the least but it was gone and the tree was now free of harming any wildlife. 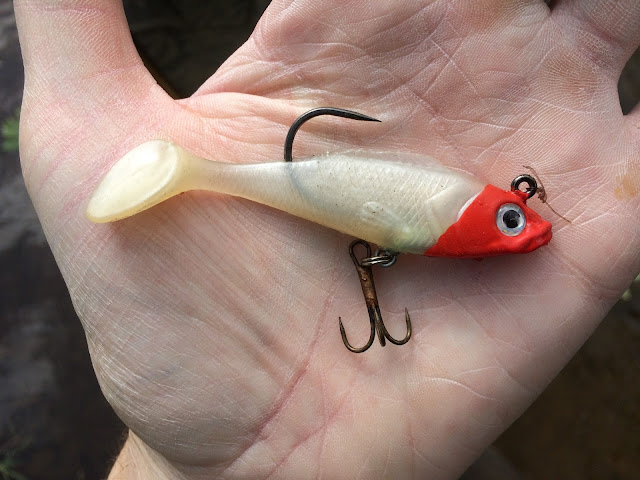