I met up with Arthur to investigate a new brook we had spotted, it was downstream of a brook that led into it so we both presumed it would have fish in it. Parking the car we headed down to inspect it, the clarity was clear and after walking 100 yards or so we came to the conclusion this brook was dead, it wasn't helped by the 2 large weirs that it ran through. Heading back to the car we was greeted by a parking warden giving Arthur a ticket, we wasn't on yellows so hopefully he will contest his case successfully.

We moved on upstream to the more industrialized sections of river i fish and the clarity would make things difficult in the narrow stretches. I opted for streamer and fished through each pool, at most i would get a chase but nothing serious and with the clarity so clear we could see the streamer being rejected. I thought it might work in the deeper water so we headed on up and let the fish downstream of us settle, despite them not having a care in the world of our presence.

We hit the deep water and started seeing fish rise, but i stayed on the streamer and was greeted by a large trout slowly eat my streamer, i struck and it reacted angrily, it shook its head and opened its mouth and the streamer popped out, the hook had failed to set. Speaking to Arthur about tactics we agreed that we'd changed to a nymph (Arthur was originally fishing dry) despite the fish rising and see if they would take it on the drop as they weren't too bothered with dries or streamers. We moved up towards the rising fish and as i was setting up Arthur struck into a big fish.

Characteristically of this river it went head down forcing its way to the bottom where all the snags were. Arthurs 3 weight was bent right over, i never asked what tippet he was using but we both knew we couldn't batter the fish too hard not let it run where it wanted. For the 30 seconds or so it stripped line and i warned Arthur or the sunken tree. He managed to halt its movement and get some line back but netting here was very treacherous, the bottom of this river is very silty and this section in particular is deep, how deep though i wasn't sure of. Thinking of were to net the fish this early is sometimes tempting fate but we needed to know were we could net it so we could fight the fish in this area, however we was on a river bank blighted with trees and the only way to get downstream was to pass the rod along around the trees.

With the longer reach i was able to get Arthurs rod round each tree to him before we got in the clear, we was back on top of the fish now but it was still fighting hard. After a good 5 minutes the fish started to tire but it was never giving up, it was time to try to net it before it was too exhausted so i attempted to get in position to net it. I lowered myself slowly off the bank, lower and lower, i was almost waist deep and i couldn't feel the bottom, scrambling back up i kicked a foothold into the bank below the water, holding on the bank with one hand and holding the net out with the other i had to batter a 'sticky bud' plant that had captured the line and was stopping Arthur bringing the fish closer in. It was eventually loose and despite still fighting Arthur managed to guide it into the net.

We was both ecstatic as it was a cracking fish, we took it upstream to a shallow section so we could keep it in the water. After letting it have a recovery as we got our camera out ready and the scales we weighed it in at 3 1/2lb after net deductions. Arthur said it was possibly a PB for him which pleased me even more! As we got the fish ready for a picture Arthur dropped the fish in the water, i lunged at it and managed to grab it before it swam off, my fishing bag falling into the river as i did so! it was worth the sacrifice, a flooded bag for a picture with the elated Arthur holding a possible PB.
After giving it time to recover it swam back off into the depths upstream and i finished setting my rod up. We knew there was 2 fish rising prior to Arthur catching his too see if it was still there. I let the 'Bendles Glitter Bug' sink slowly then i felt a slight pull, i struck hard and was rewarded with a pig of a trout. It, much like Arthurs, went down deep, fighting hard and stripping line. My reel had started to break as it was old and beginning to rust so the drag wasn't working properly. It ran me downstream and as i applied pressure it swam towards the near bank, It eventually became entangled in a sunken tree and we had to pass the rod round tree after tree to catch up to it. Lowering myself down onto the snag to attempt to remove it the vibrating in the rod stopped and i knew it had pulled off. I was a little gutted as i knew it would be of a similar size to Arthurs but it was a fun fight.

We decided to head back to a pool we saw 7 or 8 trout shoaled up with the majority easily being 2lb. We were above the fish this time as casting below was tricky so we would let the nymph drift down to them, it worked pretty quickly as i hooked a fish, it ran me up and down the pool and into the riffles above, without spooking any of the other fish despite them being in such close proximity. Then ping, one turn of its head and the hook came out. Now me and Arthur had both become a little excited as we spotted a shark of a trout patrolling this pool, funnily enough it was taking dries coming out of a tiny brook on the right of this pool. So Arthur opted back to a dry and i fished the pool a little more while he set up.

The fish ignored my nymph  despite them following it a few times and i presumed it was slightly to heavy. They ignored Arthurs dry also so we was running out of ideas, we could see the fish, and they were clearly feeding. I had one fly i had untested and this was a weightless nymph, a similar pattern to the sawyers bug, tied on a bug hook with a white yard and a red color. I got it wet so it could sink and bow and arrowed it above them. It sunk very very slowly, the monster of a trout rose up slowly off the bottom to take it, wham, i struck hard, and the shark slipped back down to the bottom, one of its 'smaller' companions had taken it off its nose. It gave a good fight but it still didn't spook any of the fish, a couple of them swam towards it to look and after a couple of minutes i led it into Arthur scoop net were it really didn't fit at all so we transferred it into my bigger net. It weighed in at just under 2 1/2lb which really made us look again at the bigger trout in this pool.

It was easily twice as big as it made the other trout look small, so we continued trying to tempt it, Arthur missed a 'little' trout and as it settled back into position, the biggest trout was unhappy and started chasing the trout out of its pool. It had definitely gone territorial as it had a second fly taken away from it, so didn't want to compete for food much longer. But after all the commotion it eventually got bored of our presence and swam upstream, so we called it a day and knew it would be there for next time. 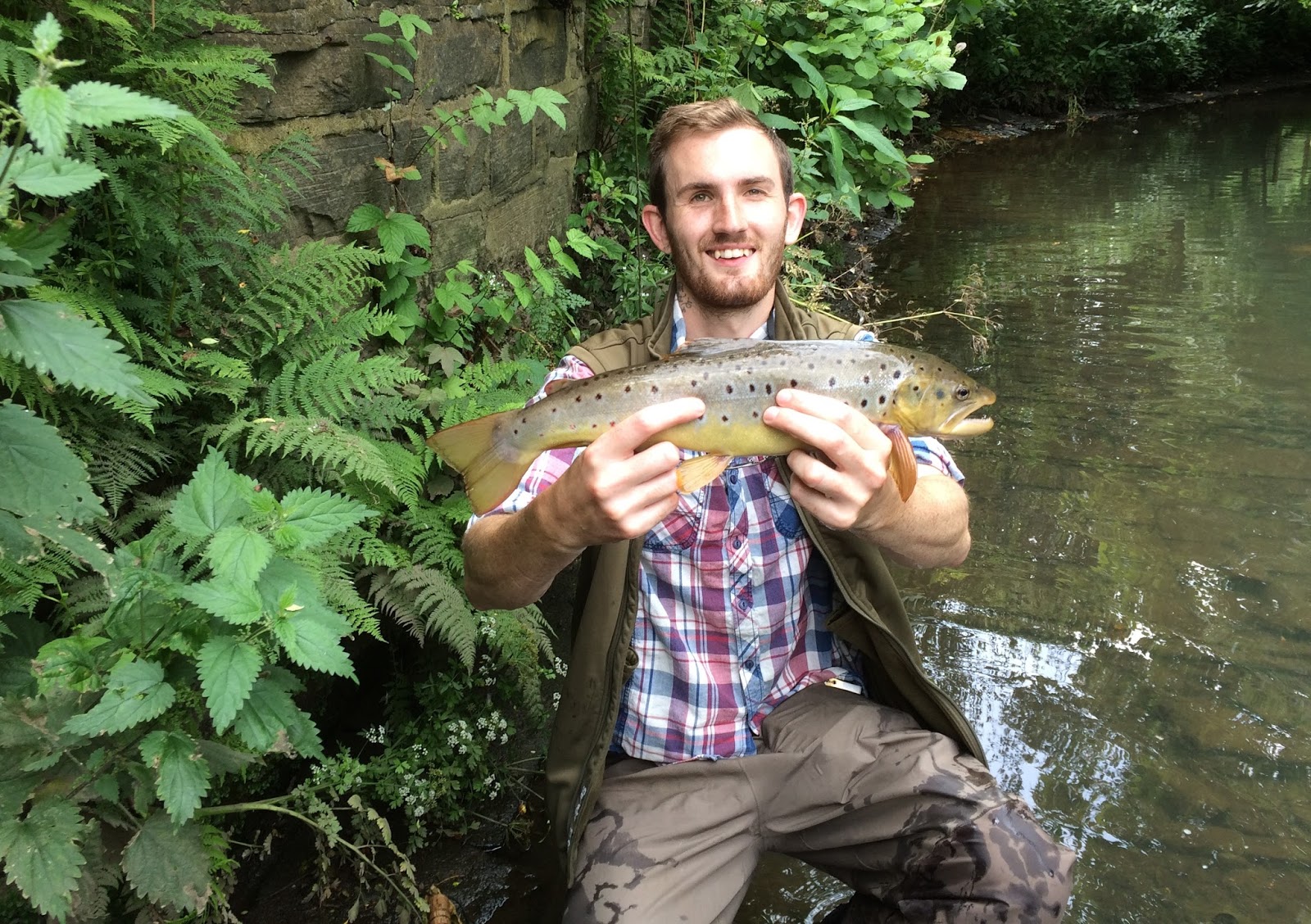