It had been a month since i had last fished with my good friend Mike France and with a date set we could only hope we hadn't jinxed anything. We've had gale force winds on the Dee and the winter floods of 2015 to deal with after setting a date and with no rain for a long time we was hoping we didn't get a large dumping of rain that'd kill off the river. The rivers need rain to be fair as we knew the river would be on it's knees. The 2 days before our outing a strong wind had built up and was set to make fishing tricky too, I'd rather it rained than be windy in fairness. But on the day it was calm and settled, warm in the sun with patches of cloud that looked like they could bring some rain in.

With the knowledge of knowing the river would be low we set out a concrete plan en-route. We knew where the deeper runs where and would target them, there's a lot of wading on our usual stretch but would it be worth fishing it all when the lies wouldn't be as strong as they usually would. So we decided not to bother. Firstly, however, we wanted to check a new swim but after having a good look and it looking fishy (and a bit ratty too) we couldn't find anywhere to park so off we went to our usual spots with the plan to scout parking locations in the future.

Earlier that morning after a couple of hours of sleep, four in fact, i sensed a needed a couple of flies tying, something different just incase, so i tied some polish nymphs with a hot collar and some flies wrapped in yarn with a bead and a dab of squirrel. (Now known as Bendle's Bug) I opted for the Bendle's Bug to try first, it was a simple fly that wouldn't sink too quick which was key as once you hit the bottom you start getting the greenish weed on the hook. To also prevent the fly from sinking to the bottom i limited the length of the tippet by using a klinkhammer, i would still get the length in the cast but i was restricting the maximum depth the fly could go. I was opting for a slow sink and to be just off the bottom in the deeper runs.

Our first run was a good test on the tactics and what to expect, we ran into some kids fishing and they had a little chat with us before we left that run, i had only hit one grayling and lost another fish. Now the river we was fishing did have grayling, but it also had plenty of trout but this river has a very healthy amount of fish due to the huge amount of food available. There were flies i hadn't seen the Irwell before, but despite this huge amount of fly activity above the water there wasn't much rising.

On our second stretch which is 100m or so if you fish it all the way up, but is only truly productive in the top half where there is a nice food lane on the far side. Mike headed up to the top half while i followed and i started off with a small trout and grayling in that pattern until i was around half way up, I'd missed a couple but they weren't anything big but i had 3 trout and 3 grayling at this half way point. 2 trout swiftly followed each other followed by a grayling and then another 2 trout. I was at the top of the run and managed to catch a low tree branch of the far side, i waded across and came across a monstrosity of discarded lines and flies and the biggest god damn hook I'd found in a tree. I suddenly became a tree surgeon and removed these lower branches as these people with there 20lb+ line were causing a death trap for bird life. I took the pile home and binned it.

The next pool wasn't too far upstream and we made our way up slowly, casting to the odd fishy looking lie. We reached the pool with 2 fish rising which Mike delicately cast too, but they stopped rising, they knew something was up and went to ground. After waiting a minute to see if they rose again and i nymphed my way up this short stretch, i hit 2 grayling around the area of the fish rising and as i worked my way up i hit into a nice grayling. Now this would normally be a quick catch and release like another out of season fish but as i reeled in a trout shot out towards the grayling and chased it shortly, it was a decent trout, nothing massive but a good trout you'd be happy to say you'd caught. It was behaviour i hadn't seen before. I now wanted this trout that had presented itself in this pool so i continued fishing 5 more grayling of similar size came out and the trout did the same aggressive actions once more, in my opinion as the trout was easily bigger as the 'king of the pool' as i call them, as i have retrieved the fish i have caused it to cross his lane and it was effectively trying to bully the fish out of it's lie.

It didn't show again and after a fish began to rise but didn't bother taking Mikes fly we headed off to the car for dinner and our next run.Our next area was a bit more tricky, with obstacles being presented their and people present so we couldn't climb through said obstacles we had to find an alternative, this was a steep thorny embankment which we made our way down.  We reached our run and fished our way up, it was only a pool on a bend but it still started off slow, Mike hit 2 fish before I'd even had a sniff but as i reached the more oxygenated water of the pool i started catching a few small fish.

Mike wasn't happy with his set up so let me fish the next short run as he changed over, it was only a foam line about knee deep and 10m long, but my second cast would prove to find the most spirited fish of the day. The fly had barely moved in the water when it grabbed it, i struck and the fish took off hard, the reel screamed as this fish bombed upstream 20-30m, i was allowing it to take line but was keeping the fish in the stretch against the far side as outside of the channels like the one i hooked it in and the one above, where very rocky and snaggy. This fish was on a mission, it had one place in mind it wanted to go and it went there, a overhanging tree root full of debris. Mike knew this was dangerous and so did i, but i was a man with a plan, keep tension and let him sit there, if i could keep him in this snag i could easily wade up behind him and scoop him out of the snag. And that's exactly what i did, like playing hide and seek with a fish. I actually snapped my line netting the fish but i later found my fly in the net. The trout wasn't huge but it was a good trout for this river and it had balls, I'm just glad i had Mike there with me to hear that screaming reel 'you can hear a mile away' as it pulled line off quicker than a stripper at a hen do. 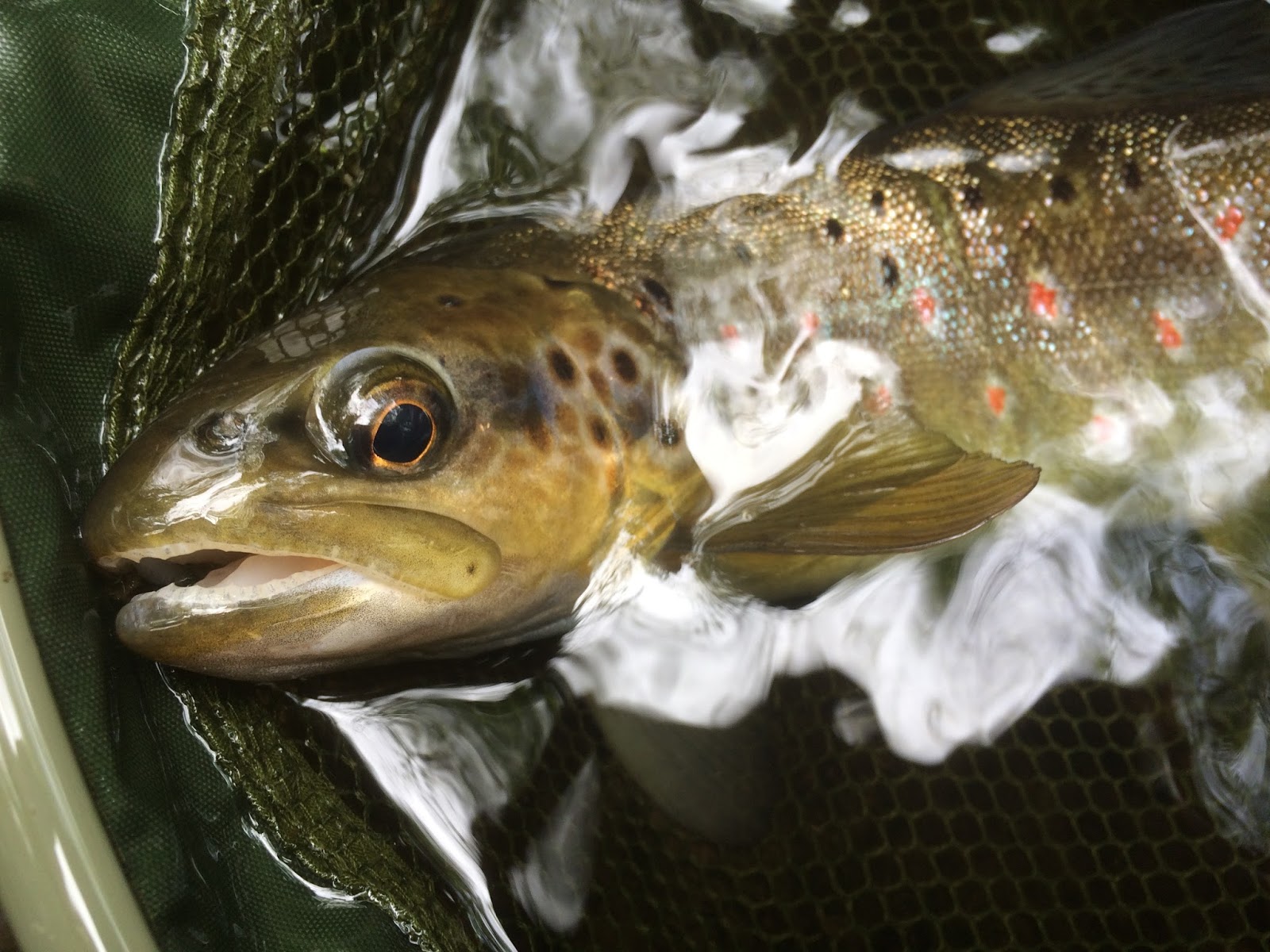 We worked our way up to the next small pool and was quite disappointed in it until the very end, the lane closest to the far wall ended up producing a lump of a grayling 48cm on the net tape, around about my PB for a grayling and also from this same river. 2 more casts into the far pool produced 2 trout until it went quite after a miss. From then on it was pack up and go home. It had been a productive day of 12 trout and 20 grayling of all sizes for myself all on one fly. The trees hadn't stole any which shows my awareness is improving and the lack of touching the bottom meant i wasn't snagging up anywhere near as much as i usually would. Mike wasn't too happy with his performance, he lost his biggest fish but he was braver than me pulling the dry flies out. In hindsight it was a good idea, but the lack of rises and consistency in them meant his opportunities were limited.

I will be hoping to test the Bendle's Bug on Irwell at some point, to see if i can find more than just the one solitary fish, maybe a run i know has produced alot of trout in the past before the pollution to see how it fairs.