With 2 weeks off work i was cramming as much time in as i possibly could with the season end drawing near.  Today i opted to fish a hole i hadn't fished for a while. the heavy rain we had last month which had people panicking about a repeat of last winter had happened since then and there had been a few changes to the river path from that. But despite bits and bobs of rain the past couple of days the river was it's lowest i'd ever seen it.  It was raining when i left the house so i changed plans and went to see if Big Barry was about.

10 minutes in and nothing was showing, as i continued to nymph the bend Big Barry leaps out the water in hunting mode and slips back in to the depths with a huge splash. You know the saying about if a tree falling in a forest would anyone hear it, well i often think does Big Barry do this when i'm not here or does he literally torment me. Anyway i popped a nymph over when he'd gone back in, i'm an optimist you see. The indicator slipped under! I struck and it was a fish! A damned minnow. Obviously Barry had been hunting minnows and i'd cast into the shoal he was feeding off. I did consider a streamer but i knew i had time to get him before the season closed so i moved on up. 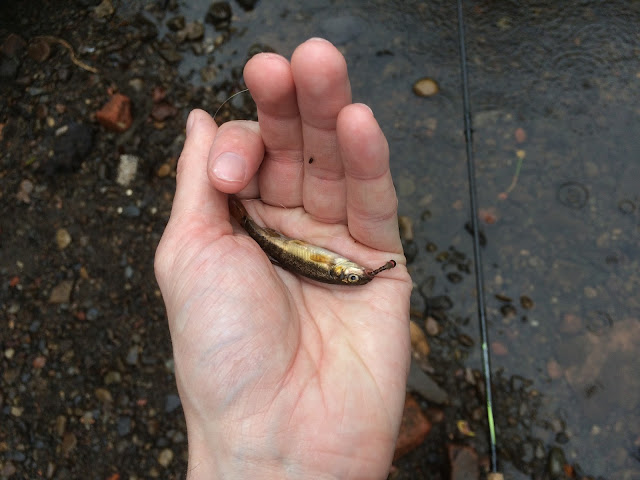 The water clarity was decent considering the rain, a good 2 feet or so, you could see the brown silt lines below the surface from the rain.  Knowing the river was low i fished the deeper pools that had a flow into them and hit into a couple of trout, the fattening up for winter has begun and even these trout where packing a punch from their early summer counterparts.  I took a couple of good trout in the first pool before heading on. I took my time with each trout, they fought hard and had twice the energy, allowing themselves to tire out, even with the occasional jump and the death shake the hooks held firm. 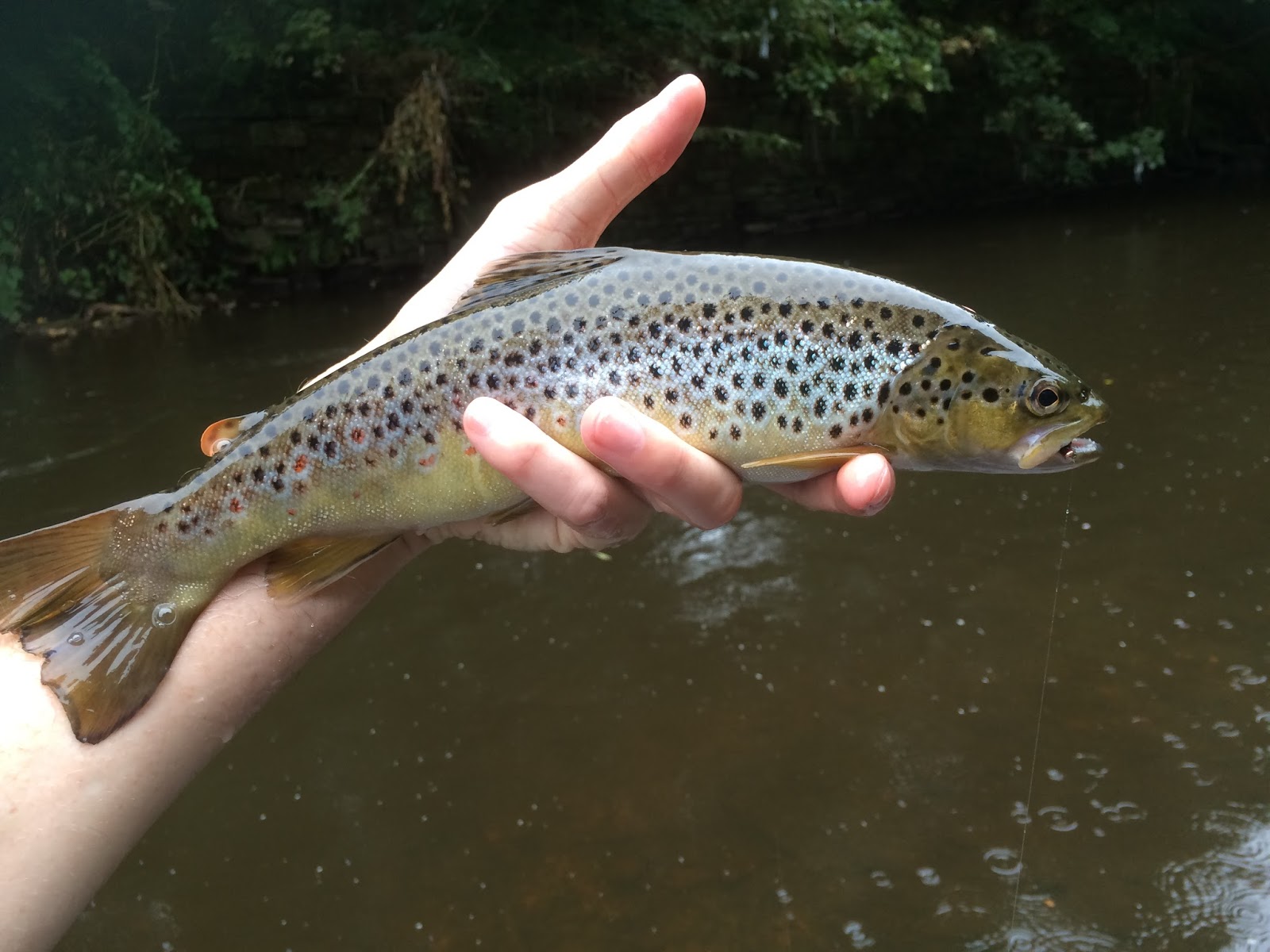 Further up i hit into another few trout, non of a particular size but showing that these smaller trout don't fare as well against their older counterparts, not as fat but still surviving, they'll know what winter is soon enough.  I was chasing rises and missed one take before a couple of lads fishing on the tip rolled up. Unfortunately just upstream of the rises and they spooked them as nothing came back up. With 6 trout in the bag and the conditions remaining the same i decided that my original place to fish was worth it. I was soaked through but the river hadn't risen much if any nor had much colour changed so it was a gamble. A 40 minute gamble. 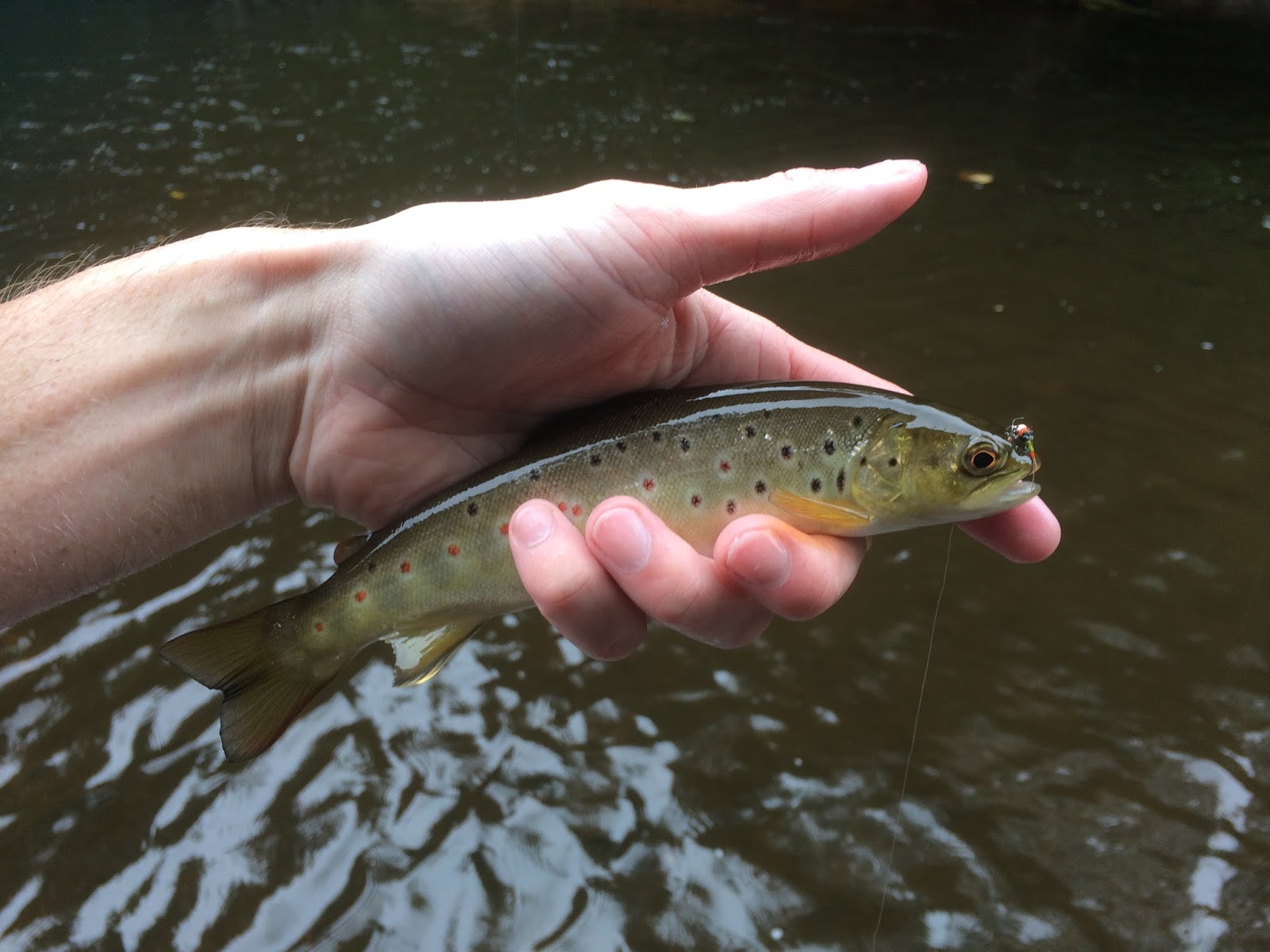 Upon reaching the new spot through every invasive species you can get on the Irwell i found it was in tip top condition. You see this is a very wide but deep stretch, the bend hits a sheer 100 foot cliff so it just digs away each time the river floods but it is also a healthy stretch. River grass and ranunculus grow here in between the bedrock which is another reason this stretch is particularly tough, deep water and very slippy bed rock. The actual only time i slipped today was walking down a muddy hill, i ended up half running down a hill about 30 metres before i managed to dig my feet in, still clean.

The water here was a dark olive green, and clarity was easily 3 feet, which gives a false impression of shallowness. The lowness of the river allowed me to negotiate the gravel banks allowing me to cross 20 metres or so of 'dead water' to reach the rivers flow. It always flows heavy through here, large underwater rocks kicking up the water into a sort of a torrent but these provide cover in the rough and there is small pockets of calm to.  I hadn't french nymphed here before, but i swapped my point fly for a heavy nymph, for some reason the weather had tangled my lines up all day, i'd tie a fly on and somehow the dropper had got in some spiderweb of a mess on its own, this had been gradually getting worse all day.

Frustrated i positioned myself, barely able to see through my poloroids through the rain, but still essential so i could watch my step, i waded in. It was almost impossible to see my indicator in the rough water and the rain so i watched the tip of my rod, i made sure the line was almost fully tight and as soon as the tip pinged i'd strike. Due to the healthy water here and the heavy nymph i was catching weed off the bottom, not the slimy stuff but the one with leaves and roots. My hands were full of olives each time i removed the weed and i continued on, ensuring i got as much water covered as possible as safely as possible.

It didn't take long until i got a clear take, a slab of a trout, they were even fatter here. It gave a good fight, i pulled it out the main current into the deep motionless pools behind me and let it calm down, the 4 weight hammering down with each pull it did. After this trout my reel jammed. It is an old reel that i'm using to nymph with as the reel isn't important other than reeling in the fish.  I couldn't take line in or off say 75% of the time, no matter how hard i pulled. I took the spool off to see if that was a problem but it persisted, so i knew that i couldn't rely on the reel, also if i had a fish i knew it would probably fail to allow any drag so if i got a big trout i'd have to chase it to avoid break offs.

I didn't hit any big trout but i had another 2 well earned trout bringing the tally to 9, bringing this years total to 219, one off last years. With the reel trouble and the tangles (it did it again), when i got to Boulder Bend i decided enough was enough. No point in allowing any frustration to ruin a good day. Rain is rain, if it isn't effecting the river in a negative way then it's fine. The river does need water but i know another foot and that bend i'd just fished is unfishable, it's a funny old game. 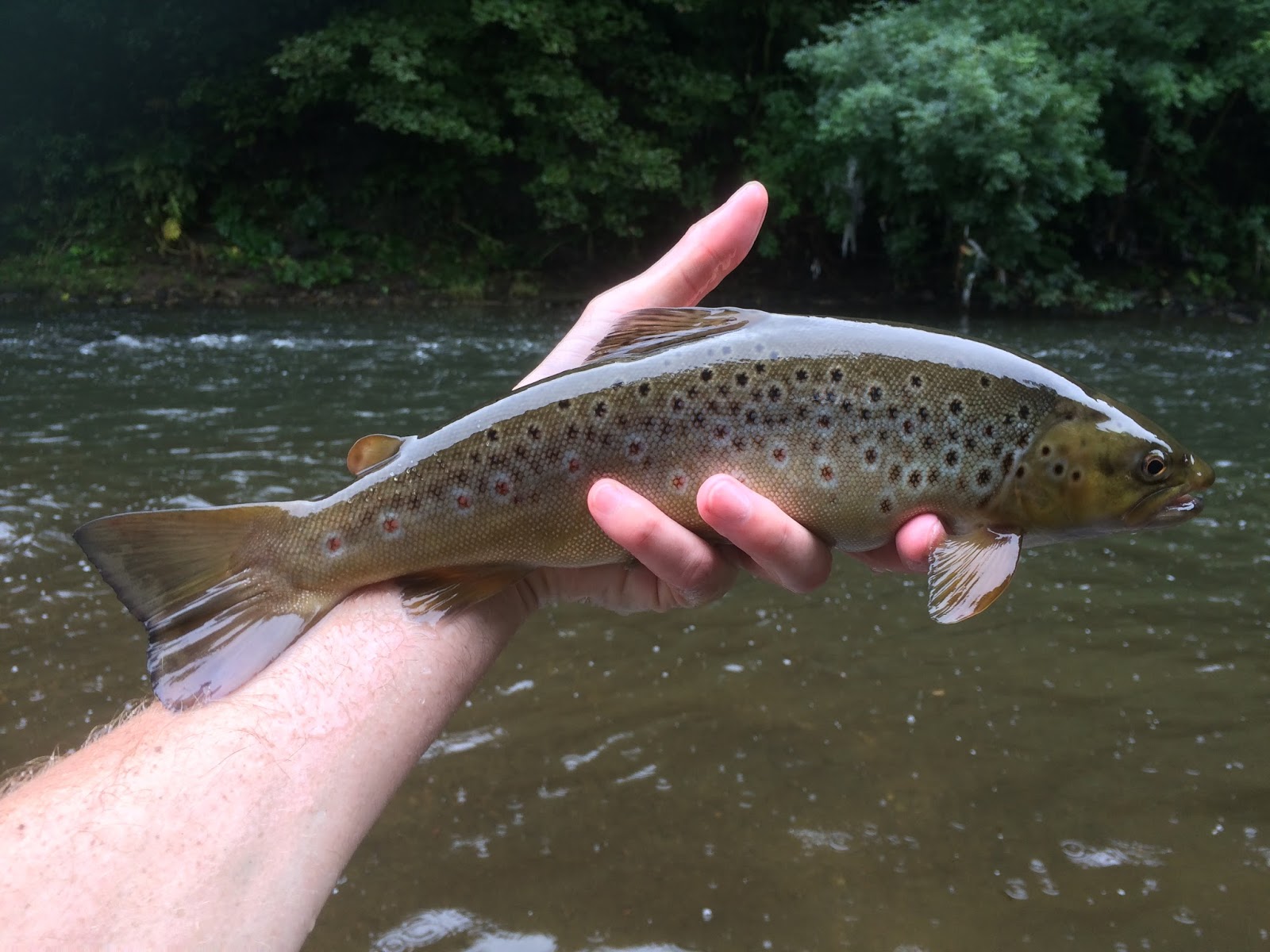 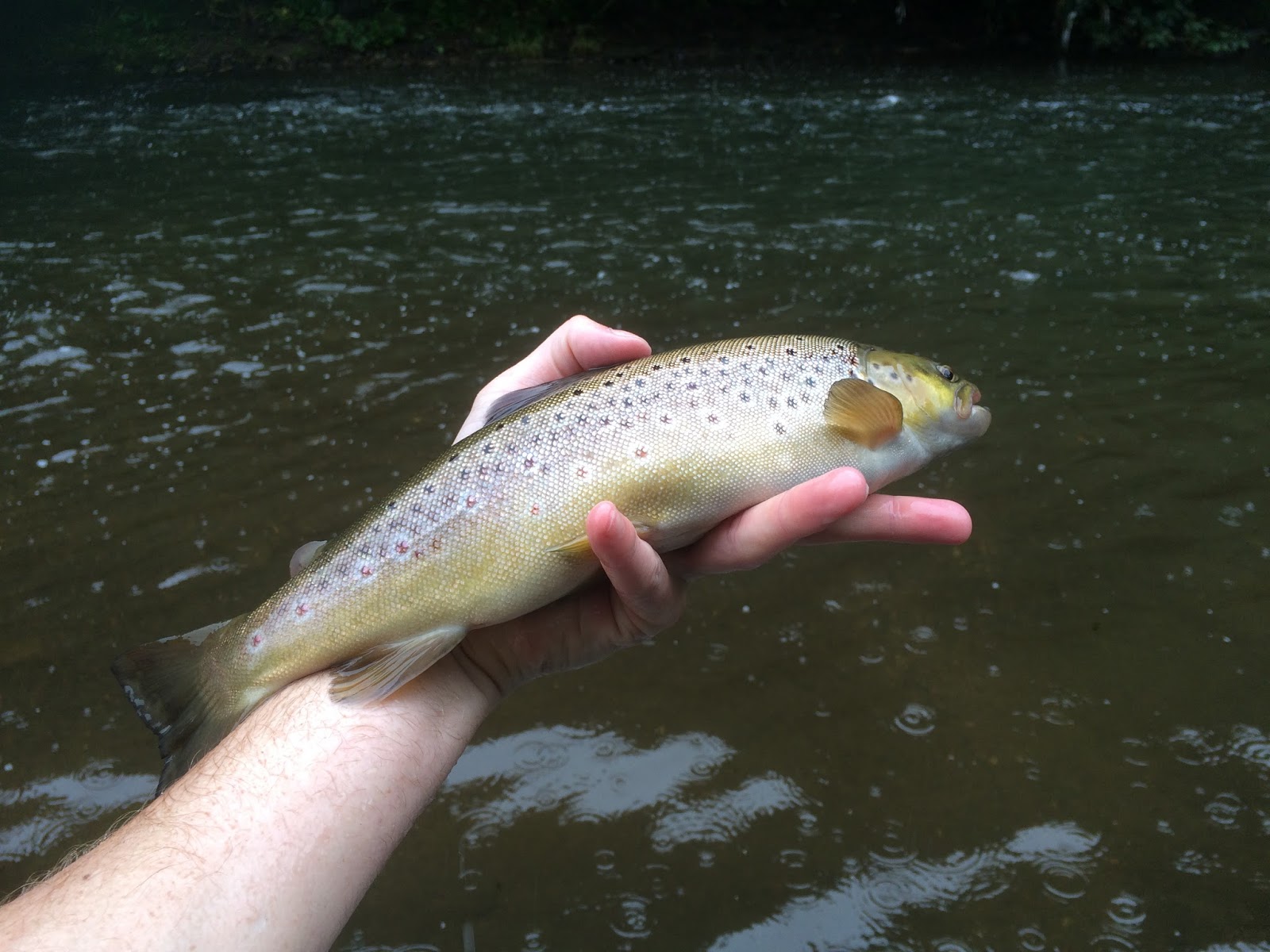