It was the day before my 2 year old daughter starts nursery for the first time, a strange feeling, she doesn't understand what is happening but she will soon enough. I decided to mark the occasion with probably her final trip before close season, unless we do an evening fish. Knowing the kids would be back at school today i was hoping for much quieter water and we wasn't disappointed upon arrival.  Lots of dog walkers but no one near the water. We headed down to big barrys run and set up, she waited patiently throwing small pebbles in the shallows while i watched the water as i set the nymphing rod up. Nothing was showing, the water was up to it's usual level but with the rain it was a mucky brown. 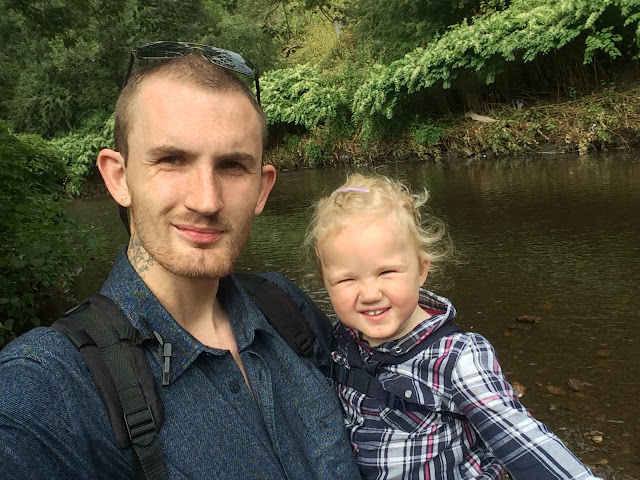 Emily on my hip we waded out slowly, when the head of a trout sipped a fly off the top. My nymphs were relatively light so we cast in front, nothing, cast again and the indicator shot off to the far bank. I struck and felt a good fish, was it big barry? We retreated to the bank and i handed Emily the rod, after reminding her which way the reel went she began to reel, she struggled as it fought hard and she let go several times as it stripped line off the reel. It was staying down and heading to the bank. Emily started to reel in again, this time the wrong way, i popped my finger on the line to avoid her feeding it slack and helped her get her bearings with the reel direction and she began to reel. It tried to run again but Emily held the reel and twang, the line snapped. I told her what happened and she had a little whinge but i promised her more fish. We didn't have to wait long. She managed to reel 2 more trout in just ahead of were we had the first trout. Her excitement showing it was all worth it, i held the rod as i showed her how to net fish, she didn't panic like last time when it splashed and she netted each one, just needed reminding to lift the net up once it was in! She handled the fish well too, she hadn't held the trout as well as she did today before so i was impressed as she overcomes her 'fear' if that's what it is. She even managed to release them gently, holding their tail till they were ready to swim away.  "Back, back!" she exclaimed after they swam off, wanting them to swim back. "We'll catch more yeah!" 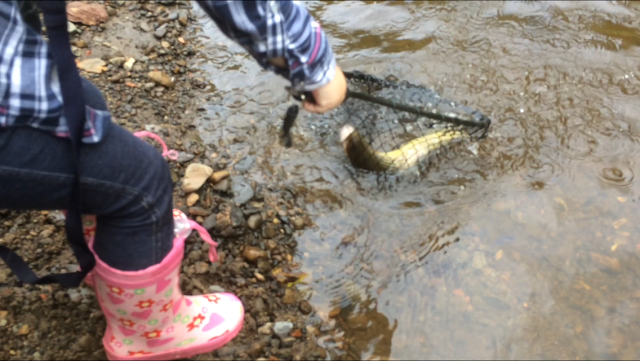 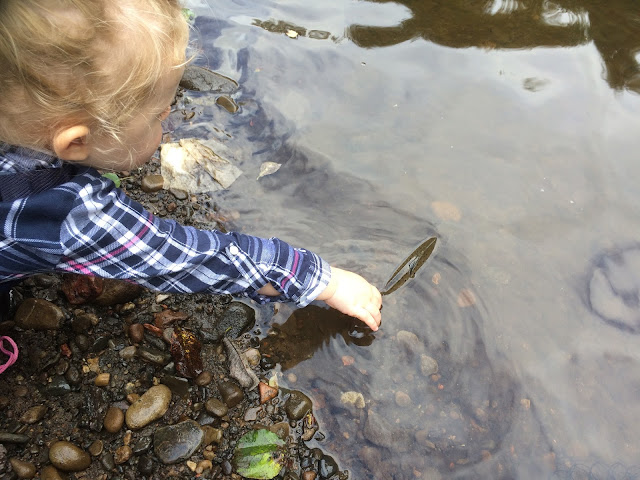 We fished the next pool to no avail, Emily started to show signs of tiredness, asking to go in her pram, i'd carried her here! But i had brought her chair so i sat her in the chair and gave her her favourite snack, a pork pie.  Unconvinced that there were no fish in the pool we had just fished i added a small shot above my nymphs and was rewarded with 3 small trout, Emily laughing away in her chair. Fed and watered we headed to the next pool, this however was like Haven Holidays so we continued on our trip to better water. 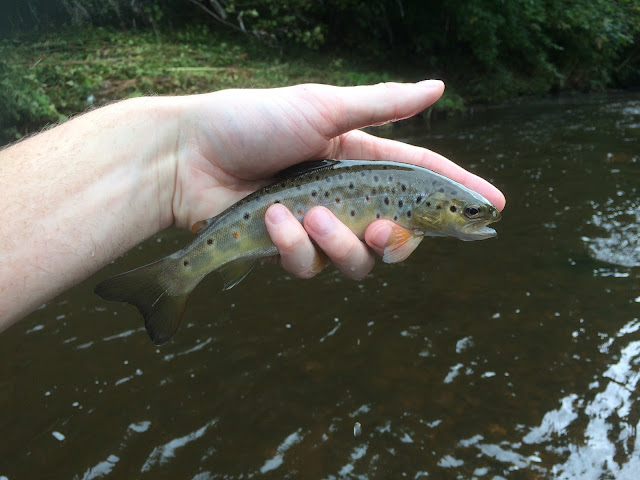 Sweating in the humid heat and carrying a oversized 2 year old, why does she have to get my 6ft 8 genes, i decided to fish one more pool. It was fairly quiet and i fished the whole pool with no success. Again i was unconvinced so fished way off the line and felt a tug, a small minnow.  Emily was pretty happy with the 'baby fish' so we decided to get a couple more, if possible. The next couple of casts were fruitless until a strong tug and a strike, a good trout leaping out of the water. Retreating back to our fighting position on the bank it was much the same from Emily, but we did do a quick run downstream for this one as it headed towards some snags. Emily fought it for 5 minutes or so before it started to surface, it wasn't ready but it was tiring. The usual last desperate run when it spots the net and she reeled the line back in. I stepped out and netted it, it still had plenty of energy as it flapped in the net. Giving it time to calm down in the water i got Emily in position for her picture.

A 17inch trout, just short of the length of my arm. Her smug look on her face as she held it there perfectly. We lowered it into the water and held it's tail together, it was a bit bigger than the ones she had had but she used everything she had learnt to make sure it went back for another day. It swam off and we high fived. Ending the day on a high i packed away and popped her on my shoulder for the 40 minute walk back home. The shoulder burn is quite painful especially when she becomes dead weight when she fell asleep 15 minutes away from home. 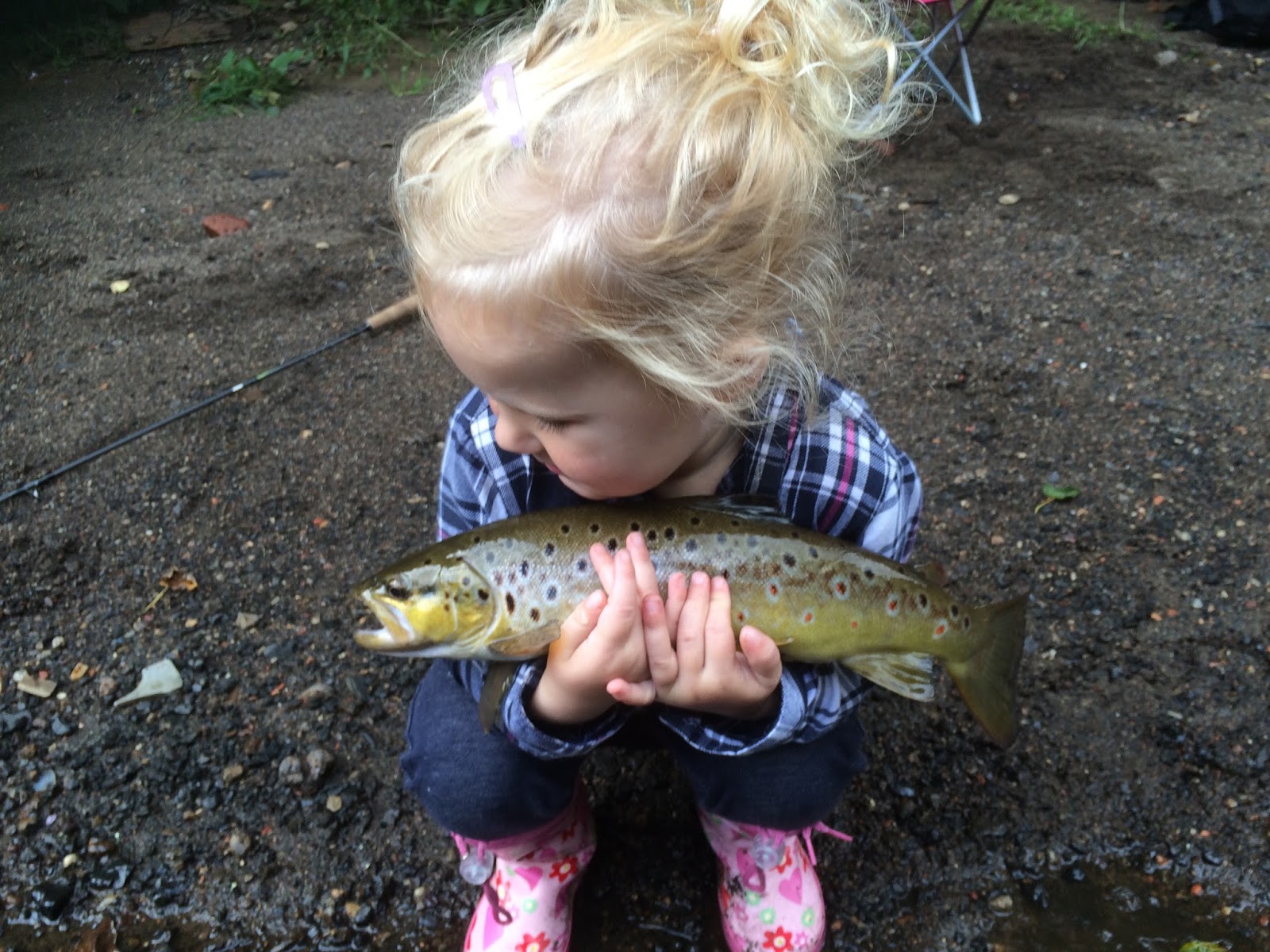 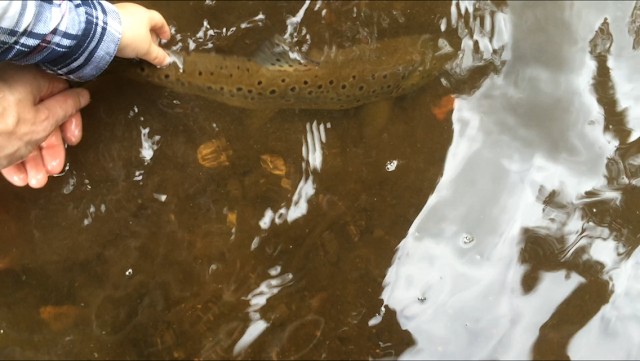 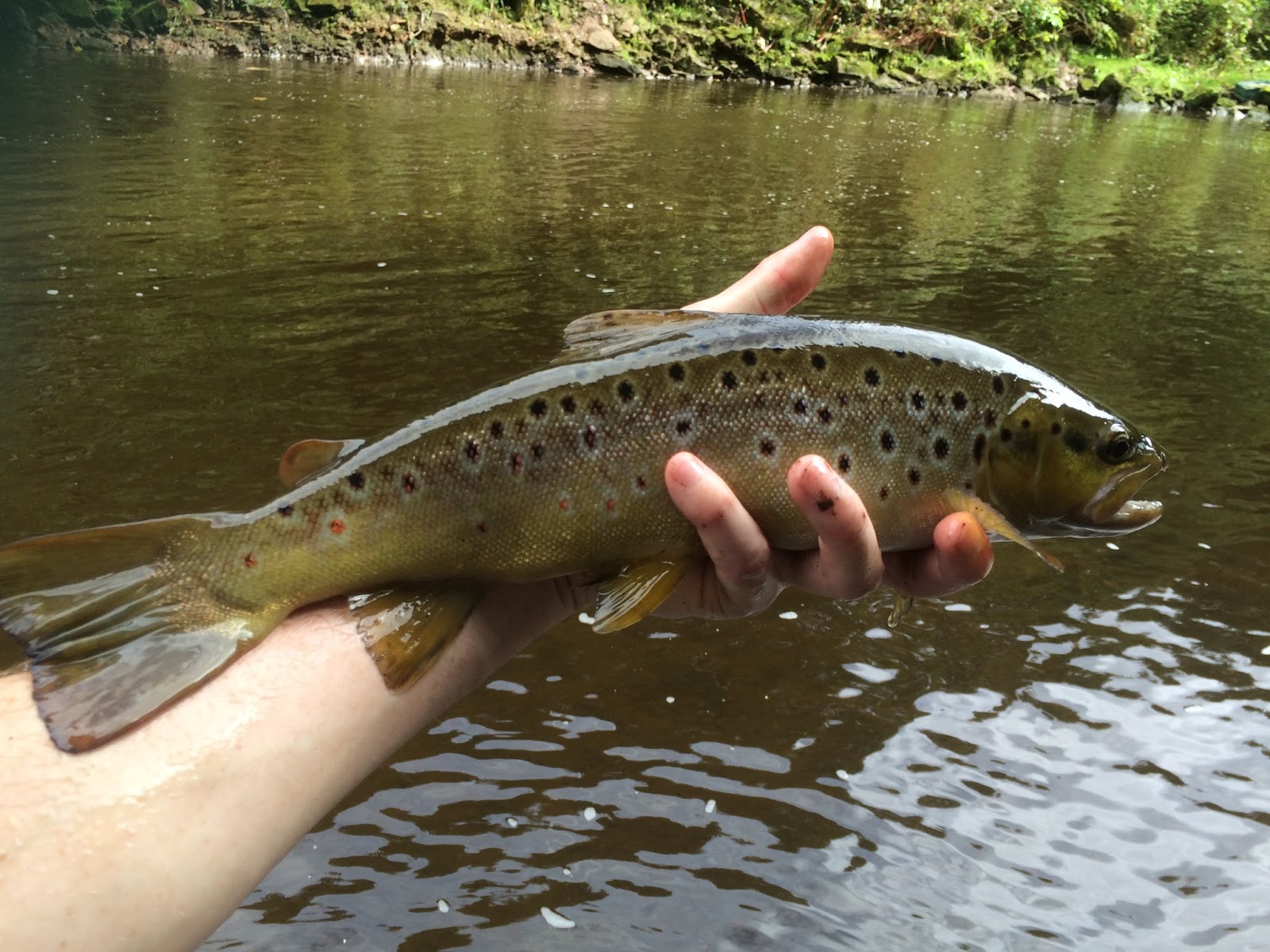