So since i took up fly fishing back in April. One of the greatest decisions i have made i might add, i have come to learn so much about the art of fly fishing and yet still know so very little. You see fly fishing is all about theories. It's ok knowing what your doing, but in fact there are a thousand theories in your head once you arrive. Which fly, location, method, angle, distance, thousands that we have to filter through in a short space of time that we barely realise how much we do, but even then the choice we make doesn't guarantee us a fish, as the only truth amongst all these theories is the trouts final decision itself.

Now i have come to know of some very good fly fisherman and some personally, which when you originally come from a council estate in Bolton i wouldn't of expected to be among people such as these and to you all, and even those who merely put the odd comment now and again, it's all very much appreciated.

I am moving house at the moment so any more fishing this month before 2016 is unlikely so the chance of a winter pike on the fly is highly unlikely as free time has been sparse. So this is, i guess, a summary of my first 'year' of fly fishing.

It all started off with me treking down the river, wading in with my wellies on and practicing my casting. Youtube and text book guided. I hadn't been fishing since school, though i had fished since i was 3, but now i had a beautiful family i could go out and relax and unwind and when that large trout came full bodied out the water my hunger was back.  It took me 4 trips before i got a take and then another till i landed one (well 3) 2 on the nymph and 1 on the dry as it began to rain. Since then i went 44 trips without blanking, some days tougher than others but learning all the time.

The last time i went was when the hurricanes landed, Abigail or angelica i believe it was called, the river was high and dangerous but we risked it, then we did an hour on the canal for pike. I blanked that day, understandably. Since then there were 3 more hurricanes, i've had walks down to see the local Irwell sections and the river has changed shape with the huge flow we have had. But with time constraints the piking has been out of reach.

All in all my tally for the year stands at: 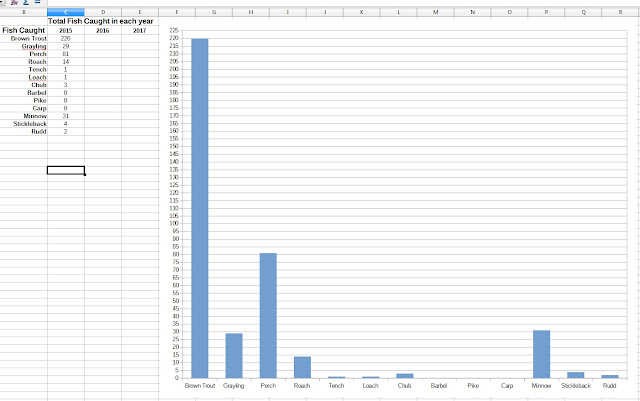 I'll leave my last video from youtube here and keep an eye out for next years adventures too, where my daughter maybe alongside me (if she doesn't throw the rod in)