A new taste of water

It was a chilly start to the day which woke me up quite quickly once i stepped out of bed. Back on the school run as my daughter started school for the first time. With the promise of fishing later with football rival Nick Behan i was a little happier about getting back into the school run routine. Nick had promised to show me one of his nicer waters with both trout and grayling to catch. Unfortunately on route the weather started to get brighter and warmer. Not what is needed, the summer has been so dry and with so little frequent rain any rain we do get runs off so quickly that it might as well not bothered. In fact my best fish this year and the most fish i caught were both in heavy rain showing how much the fish were being affected.

Reaching the river i didn't know what to expect but the area we was in was alot more natural and wild. After Nick set up twice, changing his reels 3 times, losing his leader twice, which i found, he told me he was quite clumsy. Deciding to leave his phone behind just in case we headed to the river, only to find a couple of lads kick sampling where we was meant to start. I wouldn't of minded much but they weren't doing it correctly, well, not how i do it, picking up a several rocks and shaking them into the net as opposed to actually kick sampling.

Fish were rising and i started on a dry with a weightless underneath, while Nick opted for the dry. We were getting take and tugs but it seemed they were small fish which was confirmed by Nick when we eventually hooked one. Nick said the river was very low so we headed up to a deeper run. On the way i spotted a calm spot behind a rock in a heavy slow and dropped my fly in, i saw the fish chase it and but as it went downstream as i struck the hook pulled out of its mouth. It was a lovely looking run below a weir, very deep looking but only provided me one trout while Nick caught grayling above it. I almost put a streamer on at this point as there was no way there werent a number of fish here but Nick tempted me by telling me he knew a honey spot.

Walking on upstream we came to said spot and it did look very fishy with moving water, channels and deep pools. I fished downstream while Nick was upstream and was surprised not to get a take. So i popped on a streamer and caught 2 small trout in succession. Nick shouted me and he had another grayling so i headed upstream and told him the news. We was both equally confused as even with the low water there was these runs we had fished that should of held bigger fish.

Nick handed me his rod, a Marryat rod to have a cast and it felt very different to what i was used to, very light and the reel placement was unusual. However it did compensate for my heavy striking with its fast action as when i struck into my first grayling of the day it took the sting out of my strike.
We fished a 6 foot area of this large pool, the end of a channel which was overcast with a grassy margin and pulled a half dozen grayling out one by one.

One grayling rose up slowly beneath Nicks dry and sipped it in, even without his glasses Nick saw it take it, it was a great sight to  watch. Nick was getting the bigger ones easily, he insisted they were alot bigger here too!  A large trout jumped out of the water in the pool as we were working our fly up this grassy verge, the casting by both of us deserved a fish every cast but it just suddenly went quiet.

We would fish from there and upstream for another hour with a couple of small fish nipping at the fly and i had a small grayling again on the dry but it was a little frustrating after hitting a decent shoal of grayling for it all to go quiet again. The fish had been effected by something, they could of possibly been  more active earlier in the day in the colder morning but we have no 100% answers until next time we venture there.

In all it was a great first day out with Nick despite the short number of fish, it was nice to be on some new water that wasn't urban and he never mentioned that team from the swamp once. 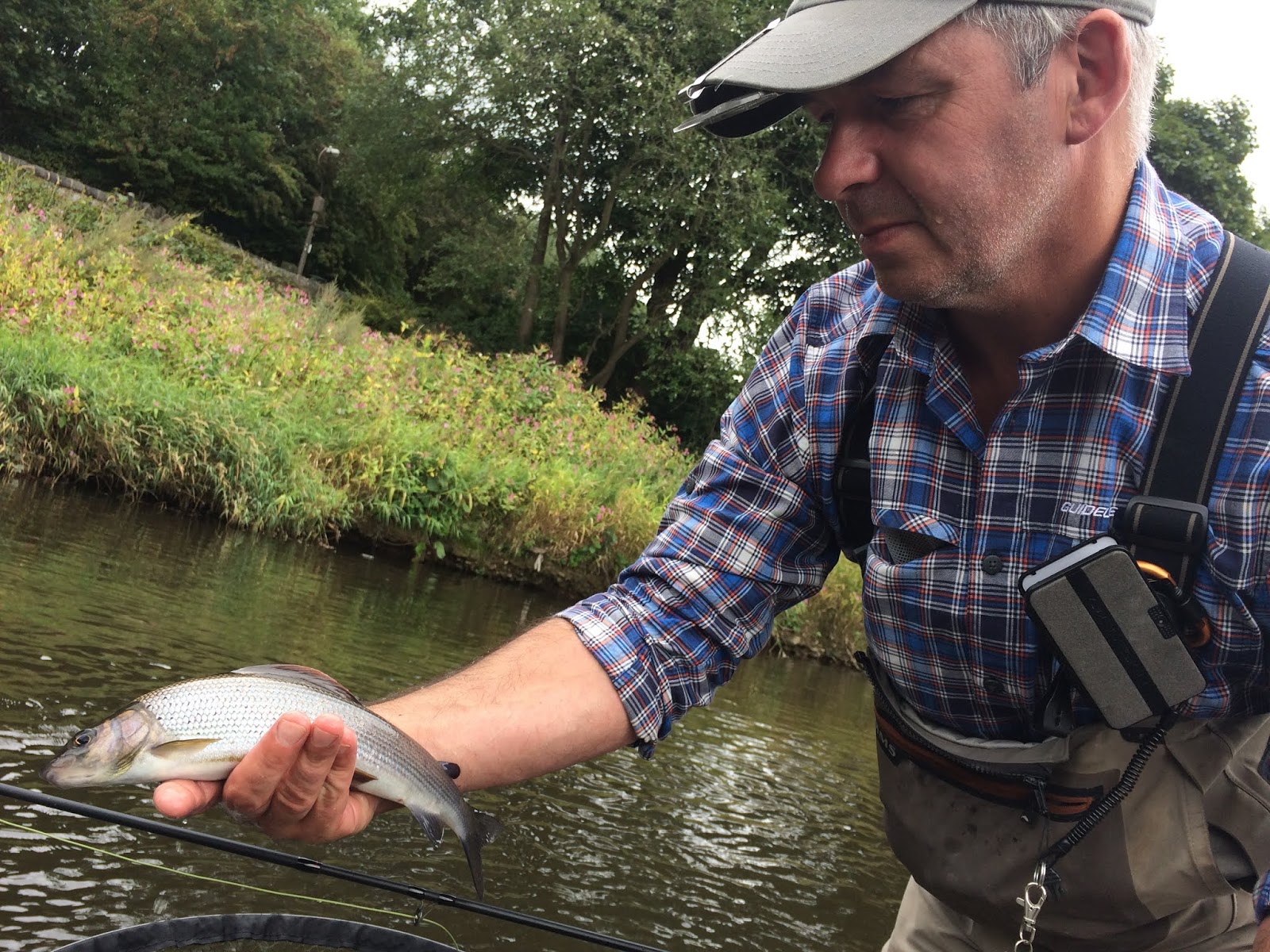 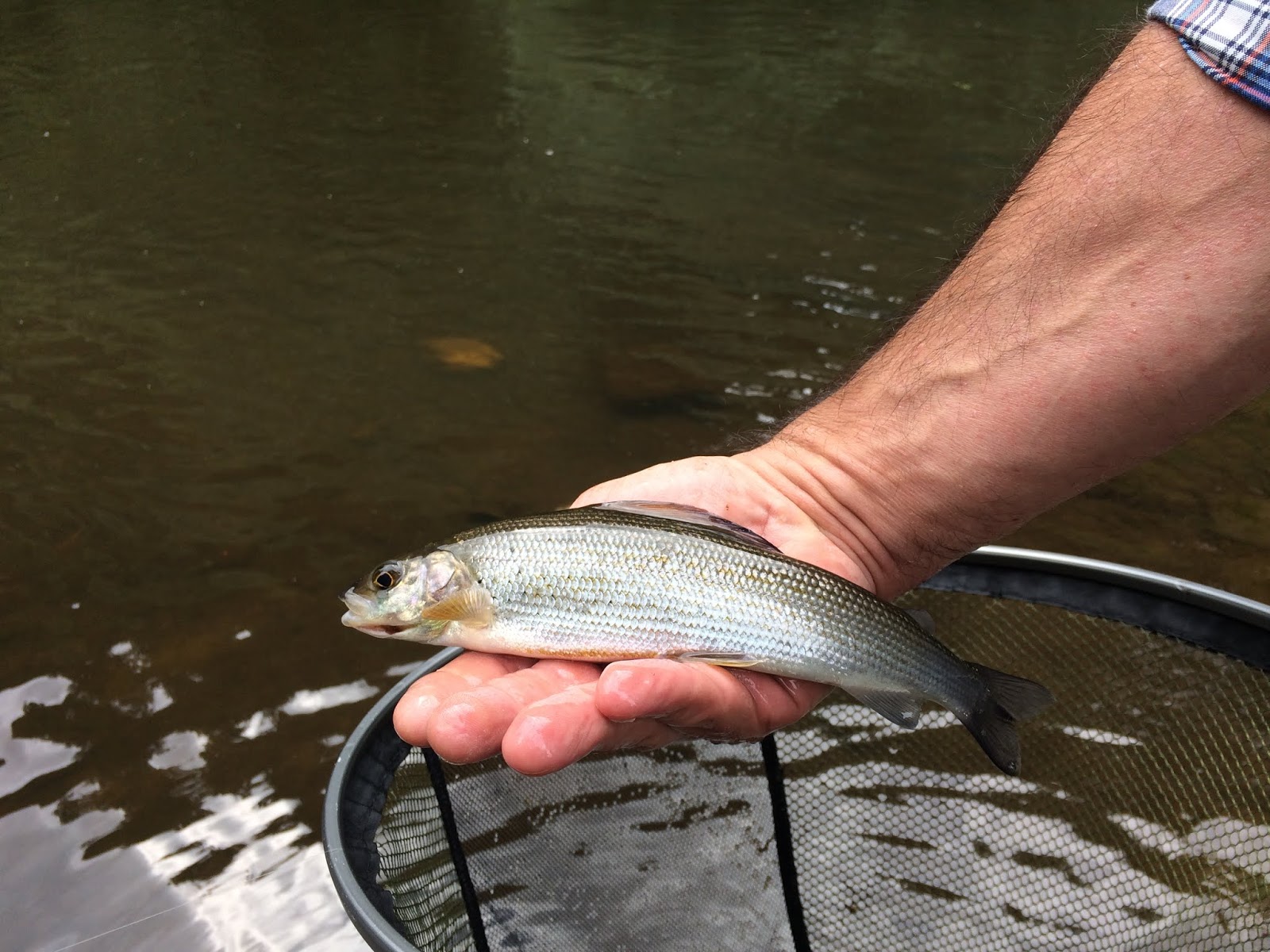 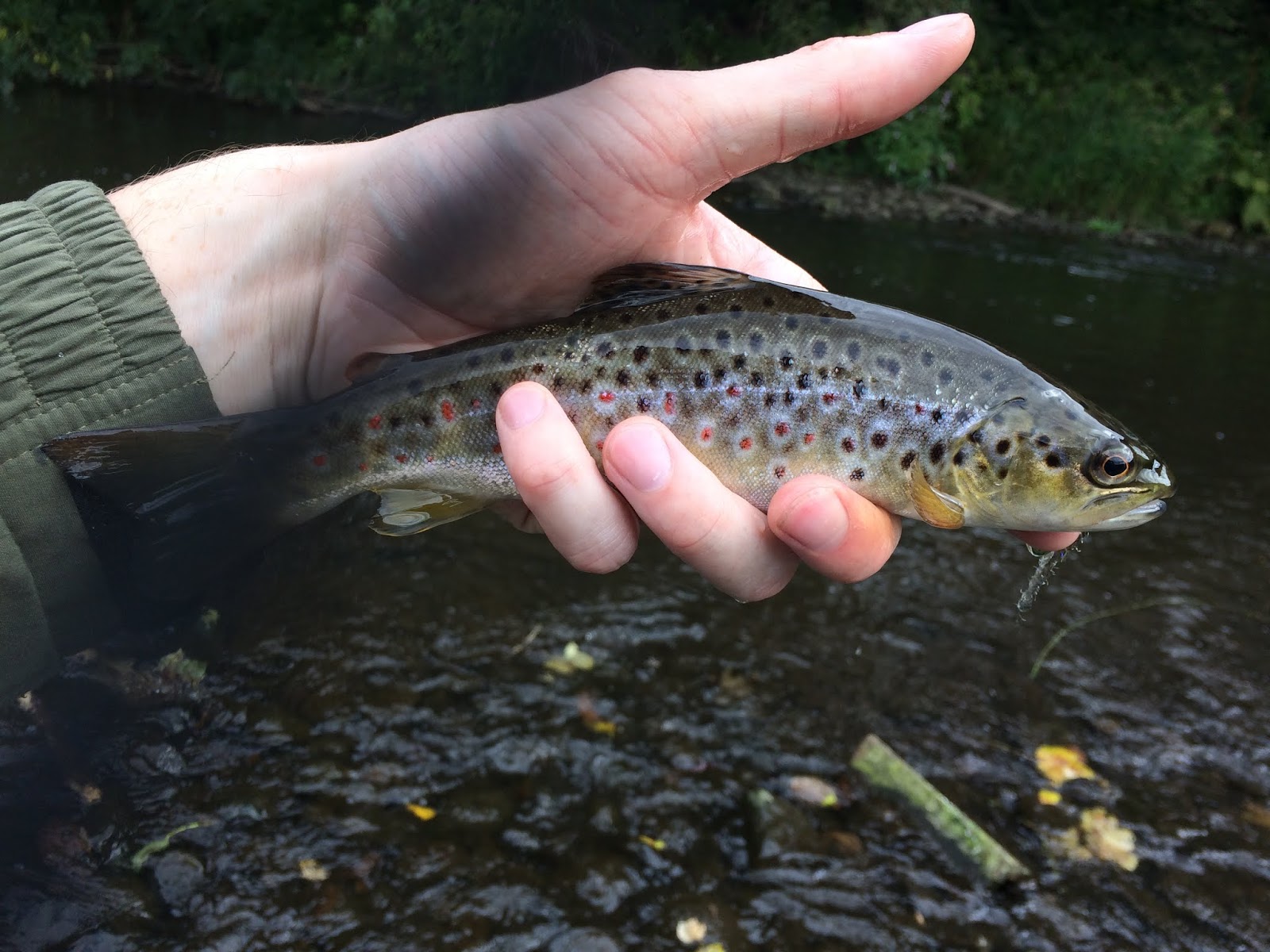 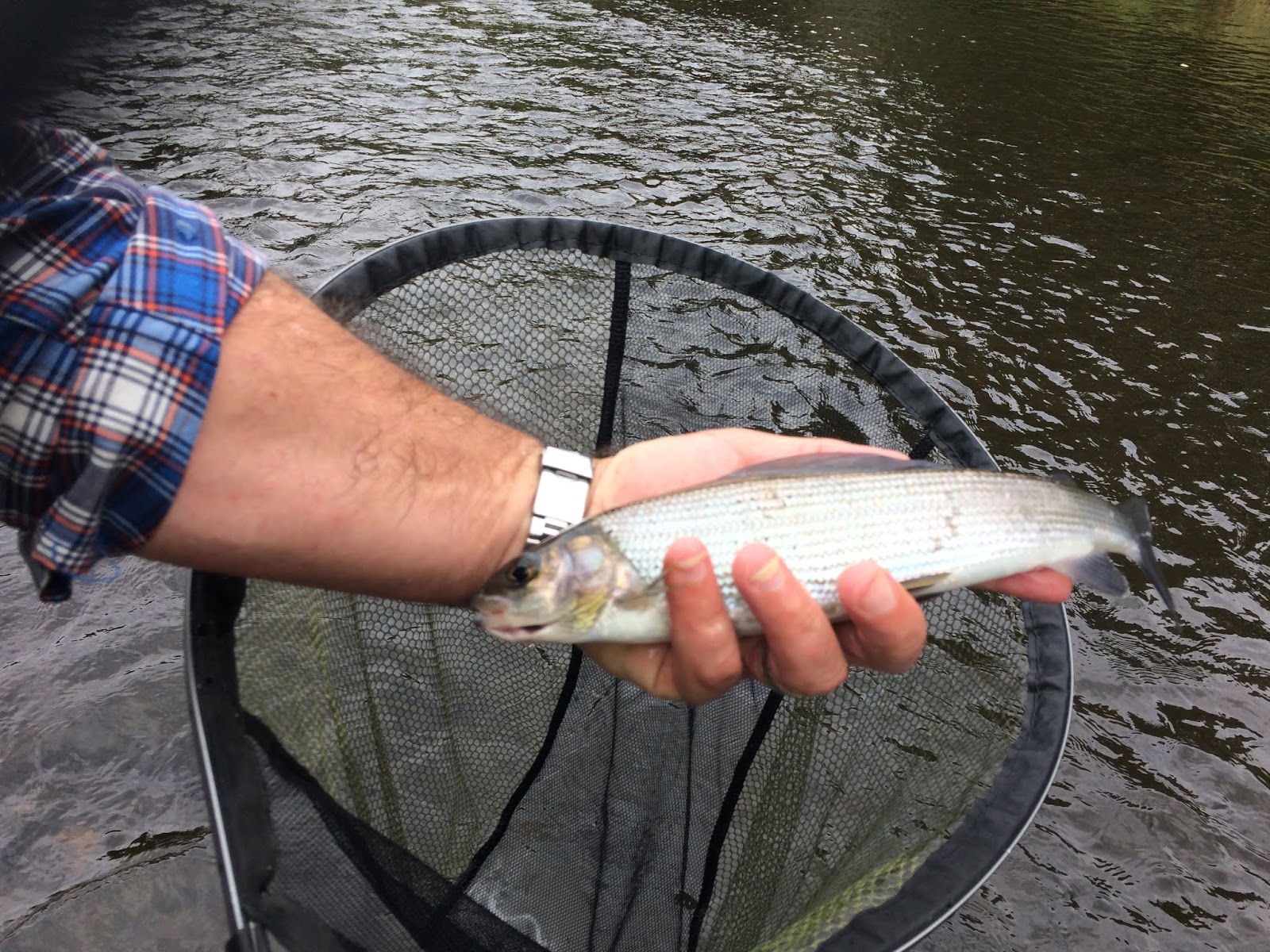 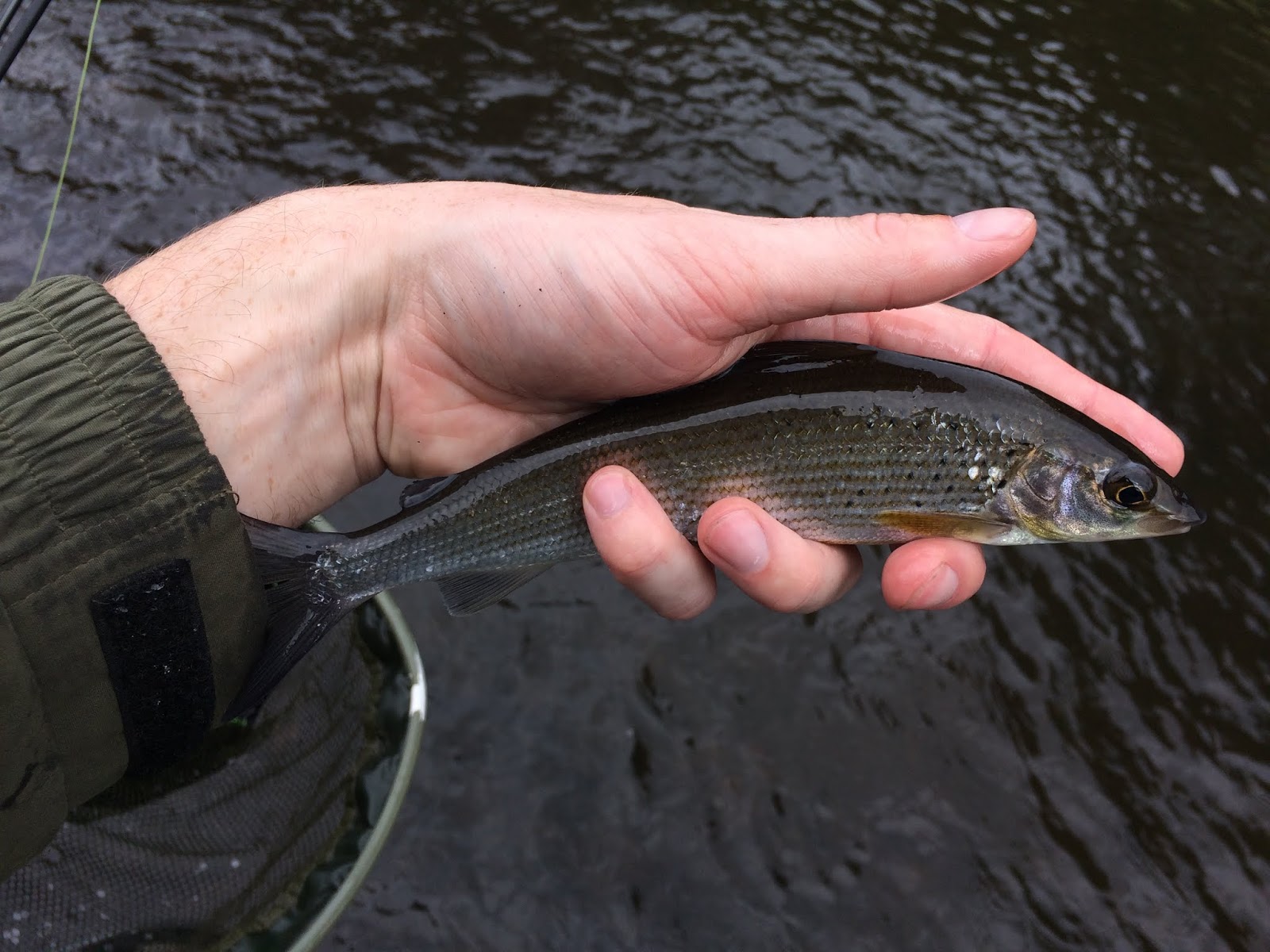