It's almost the start of the trout season but me and good friend Mike France had a date planned with some ladies for a couple of week only for Mother natures Doris to ruin our fun. The river levels had dropped but with it still being 3 times as high as it was 2 days prior it was still carrying substantial water and would no doubt be running brown. However we wouldn't be put off and decided on a trip to Wales, in fairness the Welsh streams had cleared up quite quickly but in comparison to the rivers we fish they don't have tonnes of crap being washed into them. The fishery of choice was Chirk Fisheries and this would be the first one i would have fished on.

Upon arrival there was a steady breeze, bright sunlight warmed your face until the cold wind stole it away. There was a couple of people starting up when we got there and myself and Mike where soon fishing ourselves. We chose the bottom end of the lake where the wind was blowing towards, fishing left to right using the wind as the movement mixed with a retrieve. Now it was all a new experience for me so it was all experimental, i opted for a lightly weighted and an unweighted duo and fished an arc, changing my speed of retrieval to find the fish. The water was very choppy so despite the clear water, spotting anything subsurface was practically impossible.

We were seeing rises and fish jump out on the opposite side and it became more common as it warmed up, so i switched to a klink and dink to target the fish near the surface and after seeing a rise to the right of my fly i amended the length of my line and allowed the wind to drift my fly across. The unmistakable shape of the underside of a fish rising up under the water almost made me strike but i waited that important second and it took the scud i had put below the klinkhammer. Fish on, it was a slow take at first but as it got closer to the bank it soon started to fight but with a long handle net it was quickly landed. A blue trout, some form of mutated rainbow, a pretty fish nonetheless. 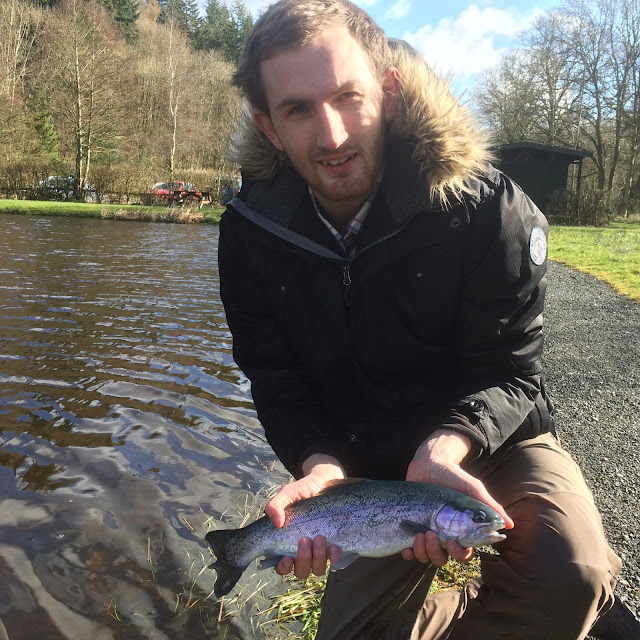 The second take i fell to the mercy of my own watercraft, i was caught watching for tell tale signs of fish when i reacted slow to the rise of another bluey and i missed the take. Not wanting to be caught unawares again on the second take on the klinkhammer i struck to hard and pinged the klinkhammer off.

It was soon dinner time and myself and Mike had a chat bankside, the wind started to drop and we spotted 2 groups of 7 and 8 swimming round in between myself and Mikes peg, who had gone to the opposite bank.  As i rerigged one of the lads who was fishing streamers sensed an oppurtunity and nipped in between myself and Mikes spot, now i did find this funny, we were on sporting tickets and to be this desperate to catch fish you must be paying to take one home. Now i had the option of saying like 'woo woo come on, at least ask if you want to cross swords first' or going irrate, even his dad was telling him he shouldn't really and he kept looking over at me too see what i was doing.

But i thought the best treatment to his constant slap slap slap of the water with his poor stripping, was to catch a fish. I missed a take on the nymph on the reed bed to my right and after working my arc i lifted to cast again when the nymph was taken again, i wasn't ready as i was inundated with slack ready to cast and somewhere inbetween trying to keep tension and reel the slack in the hook popped out. Only for Mike to then hit into a fish! It was another bluey and in perfect condition too, mine had a few scales missing. The harsh lesson of being patient with fish rather than a rush to catch them showed and the father and son went home. 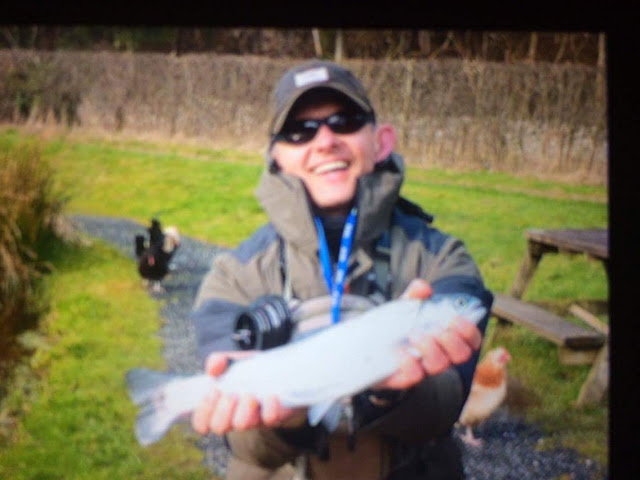 Mike warned me if i ever did that he'd never take me fishing again but he knows i am an honorable person! The wind picked back up and Mike headed to the top end where the father and son had started off, he was soon in again, third cast i think he said, on the dry, again. Another bluey!  The shoals had started to become bigger and there were some very big fish in them but they all seemed to interested in chasing each other. So i decided to make the most of a living target and used them as casting practise, if they took the fly it would be a bonus. Trying to improve your accuracy on your dries ready for the trout season to open is never a bad thing and it gave me confidence that i'd be ready for March 14th.

There can only be more! 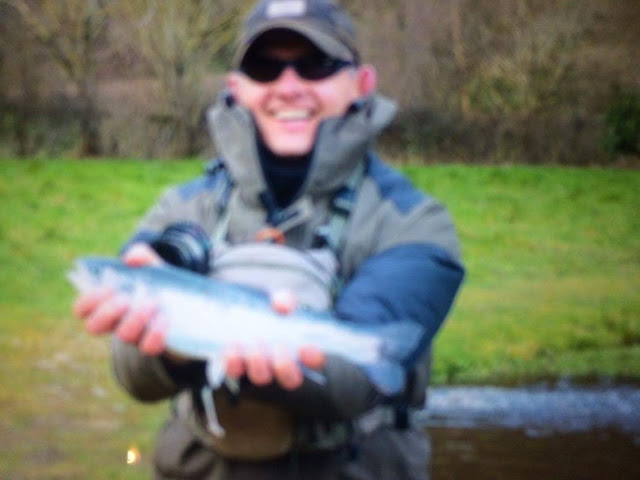