With the sight of 'Big Barry' in the previous trips fishing with my Daughter Emily i opted to try and hunt for him on my own. It was an early afternoon but with rain clouds looming i decided to venture out rather than wait till late noon where he has been showing.

Upon reaching the river it wasn't too promising, with nothing rising i stood and waited. A solitary rise after 5 or so minutes and i set up the dry rod just incase. More waiting, nothing.  So i cast a few exploratory casts to try to initiate a rise but nothing, so out came the nymphing rod and i walked downstream as far as the bottom of my run. If i fished slow i knew by the time late noon came i will be back up there.

The deep pools showed nothing but i hit into 4 trout in the faster water, dropping the french leader into the small pockets of calm, throughout the run in the more rugged white water i lost 5, none of notable size but trout none the less. 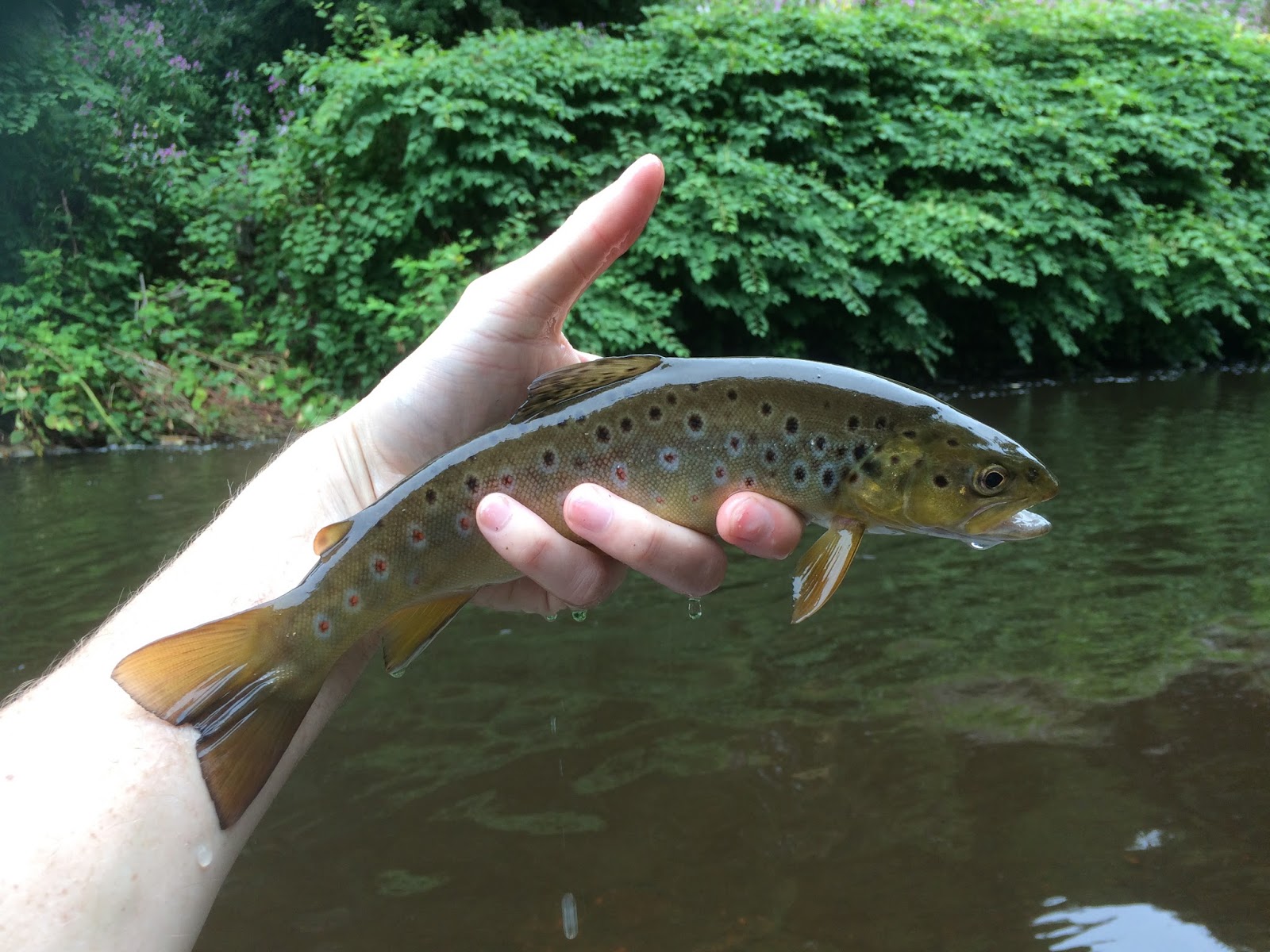 The head of the pool above the riffles yielded a decent trout, they seem to be fattening up for winter already as, though not the biggest, it was carrying some weight. In fact in all but the smallest of trout did they seem paunchy. Further upstream i hit into a few more trout and again landed another 4, a few of these were i missed the take, fed it back through the run and got it second time.

The first of the good fish then followed, a foam line against the bank feeding into a deeper pool provided a good fat trout with a strong fight for good measure. It's a shame i lost my camera as the fight and aerobatics these trout were giving was all great fun. 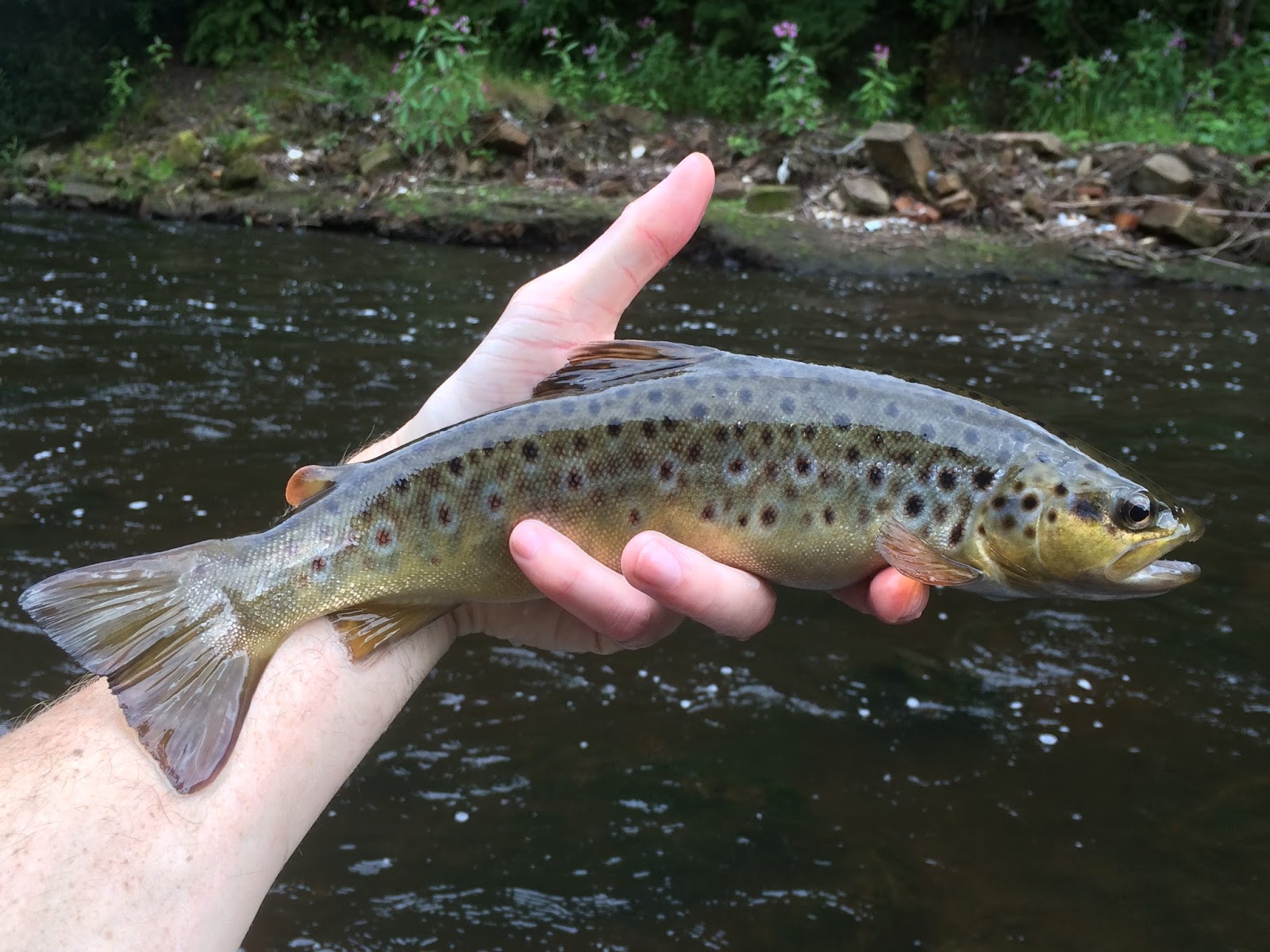 That was funnily followed by a tiny minnow, surprisingly only my 4th of the season compared to last years 31. Moving into the long run that has been hit and miss this season, were i got 2 great trout early in the season, a half dozen or so on one particular trip yet nothing else here other than the odd one at a push. However today proved lucky and after a small trout i hit into my second good trout and to top it off it was a beautifully marked trout. 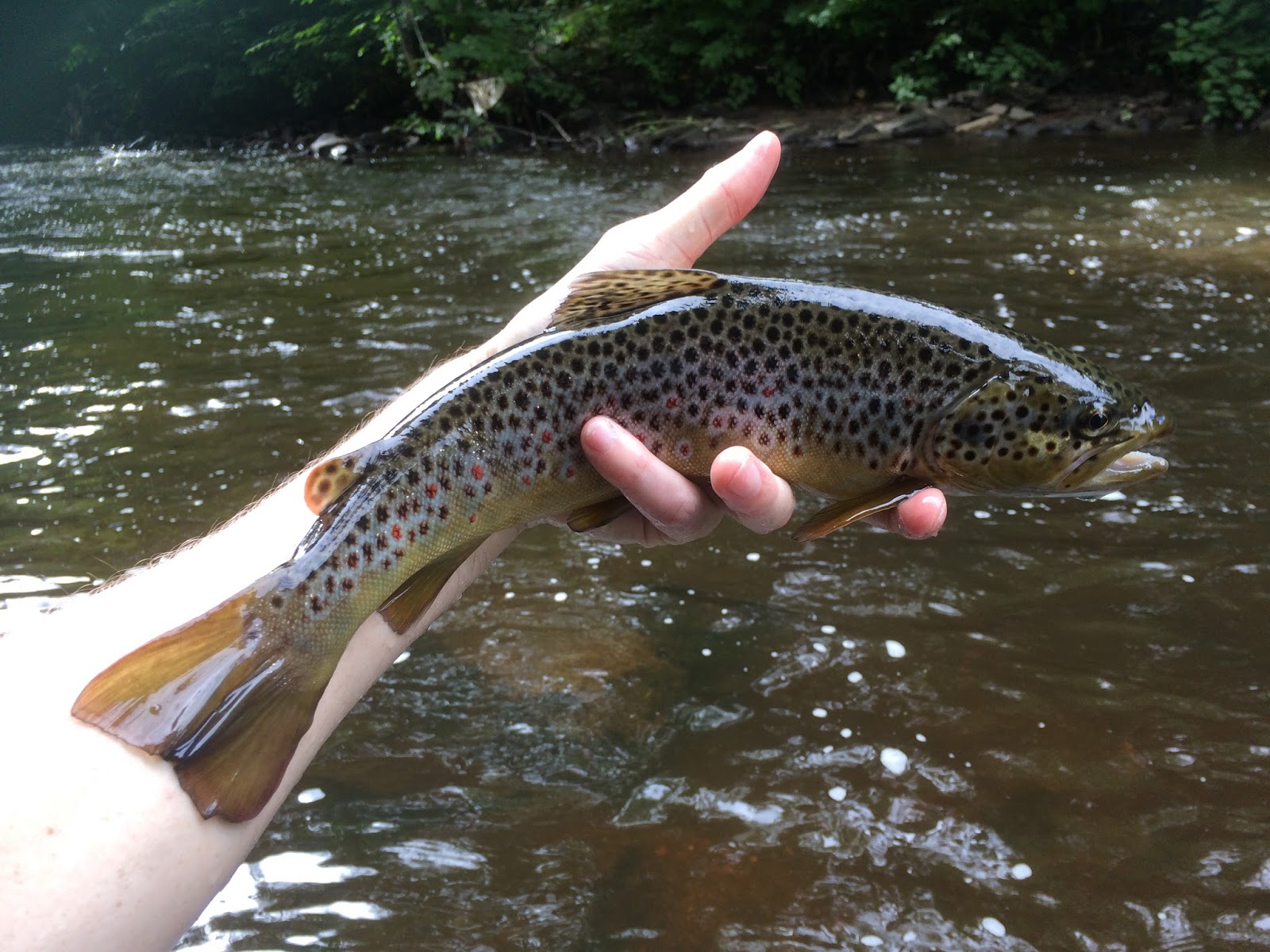 The run above this you may know from my blogs was a hive for dry fly fishing last season but this season rises have been few and far between. Despite this i was willing to explore the foam line and was shocked that on my false cast to strip line out a trout rose up for the fly, my slow reactions with the surprise of what happened missed it however. 1, 2, 3 casts before it came back up for it, a cast to the right of where it rose brought it back up and it was a small trout. 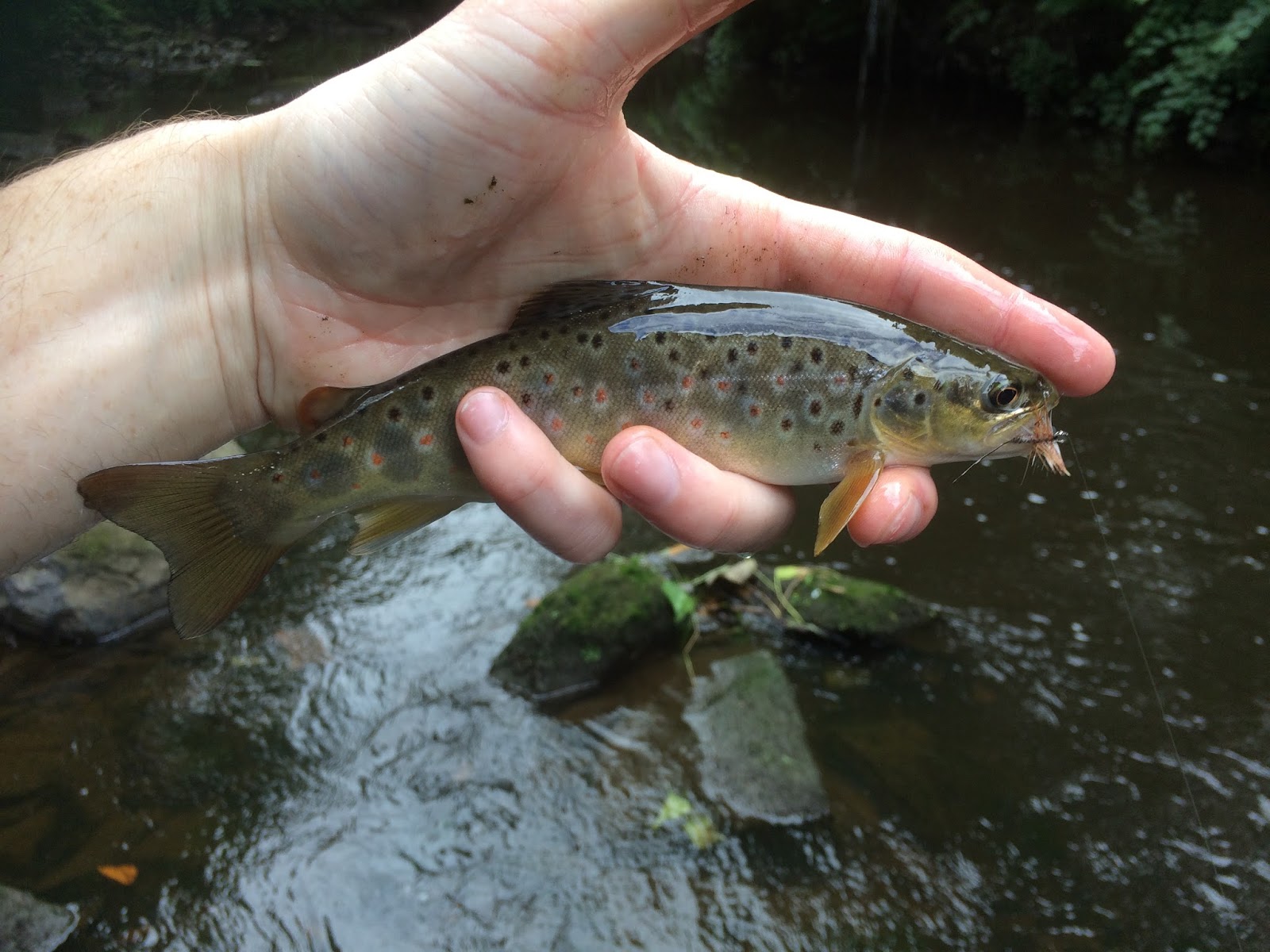 As i unhooked it i saw a single rise above 'the rock', a huge boulder midstream that is perfect for presentation. Any cast over the top of it allows your line not to cause drift when the line lays on top. The first cast was a little to much to the left but as i plucked my fly back, bare in mine i'm 30-40feet away at least, i spotted the head of a trout move towards the fly. I was already mid 'pluck' when i spotted it but my brain registered it instantly and i spoke allowed 'it blood turned for it'. Second cast again a bit to the left but this time i saw the trout swim towards it and sip it off the top.  I struck and it was up in the air, a fish of 2-3lbs, in no less than a second of it hitting the water it started storming off upstream stripping line when the loud twang of the line snapping rattled the air.  I inspected the damage, it was a mid line snap, probably a weak spot caused from a snag or something, but either way the fish was gone, which reiterates why we should always use barbless hooks. There's a chance i'll hit that trout again this season.

I re-rigged and surprisingly seen a small rise in the same spot, then again! Did it want me to get the hook out for it? I cast and the fly was taken, a small trout. Regardless it was on the dry again. I spent the next 1 or 2 hours, standing around waiting, watching. A small trout leapt out of the water, a couple of single rises but nothing else. 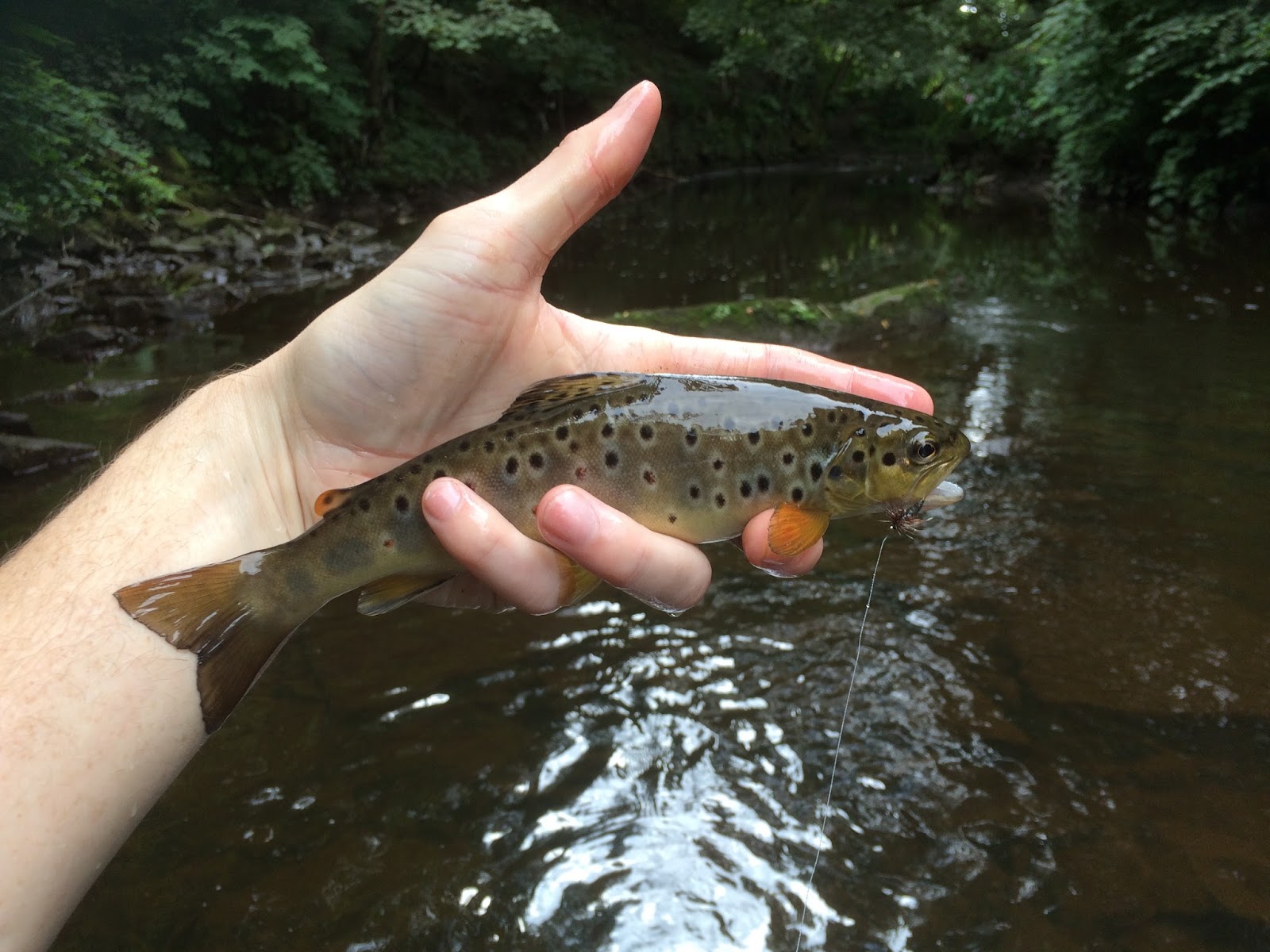