With the close season in full effect and a couple of hours to spare before last light i decided to put some chub chasing research into action. There isn't much about fly fishing for chub on the internet, but the general gist of it is to allow a nymph to swing in an arc from directly in front of you to 90' downstream, then a slow retrieve. With this in mind and the water being high and dirty after the much needed rain i looked towards the deep pools at the end of faster water. Basically well oxygenated pools were food would accumulate.

It was 5pm when i first started out so the dark was already drawing in, with 4 pools in mind to fish, i decided half hour on each was fair game. Pool one was where i hooked and lost the biggest trout i had seen personally, yet alone landed but knew i had lost that fish due to snags. It was only a couple of flies i'd be losing this time, with my new wading stick i was able to salvage most of the flies by getting closer. I know one snag is a huge pine tree branch as only the smaller branch would come up the weight of it too much for the wading stick and too deep for me to grab it.  No hits here.

Moving to the second run i knew this had the odd snag, and it wasn't long till i found out how large the piece of metal was that popped up above the water. Surely it's an aeroplane wing or something? Regardless the barbless hooks allowed most of the snags to ping off with counter directional pull. Again here nothing. I decided to head to the next run but failed to compensate the time it takes me to get to each pool in my fishing time, so i was running out of light fast and would only be able to fish one more pool.

The last pool has been productive for trout in September with several 14 and 15 inch trout coming out. Would it be the same for the chub? 10 minutes went by until i got my first hit and it was a slow heavy take. Initially thinking it was a moving snag as it gently flowed downstream, it suddenly bolted down. It was a fair weight and i knew it was a decent fish, was it the chub i was after? I'd seen a few knocking around these runs in the summer of a good few pound but so far they'd eluded me. It wasn't swimming fast, mainly using its weight to hug the bottom, then it decided to bolt to the far bank, dragging line of the reel i stopped it dead in a risky line grab as it headed straight for the far side, i know there is a sunken tree branch on that side. The momentum caused the fish to pendulum up through the water column and out of the water. It was a trout.

That was its power, yet it didn't want to use it, it was a still a strong fighter and resistant to turn but i could constantly feel a downward pull rather than a pull up or downstream. After around 2 minutes the constant turning and retrieving of line i had it on it's side, after one squeaky bum moment at the net when it decided it had a short sprint left, i had it soon back in. It slowly plopped into the net. Barely. I have a 16 inch diameter net and it was bigger than that!  It was the offseason however so joys and frustration were mixed. No fancy photoshoot for this old girl. I presume it was female as she was as fat as my arm. A belly of gold and grey. A quick picture in the net before i set her for release, a quick measure against my arm as i laid her in the water showed she was from the tip of my finger to the crease in my arm.  A good 18 inches once i measured at home. She swam off in only a couple of seconds and i packed up set for home.

Turns out my chubbing technique avoids all fish except my new personal best trout. Who i couldn't give the full glory of the camera. 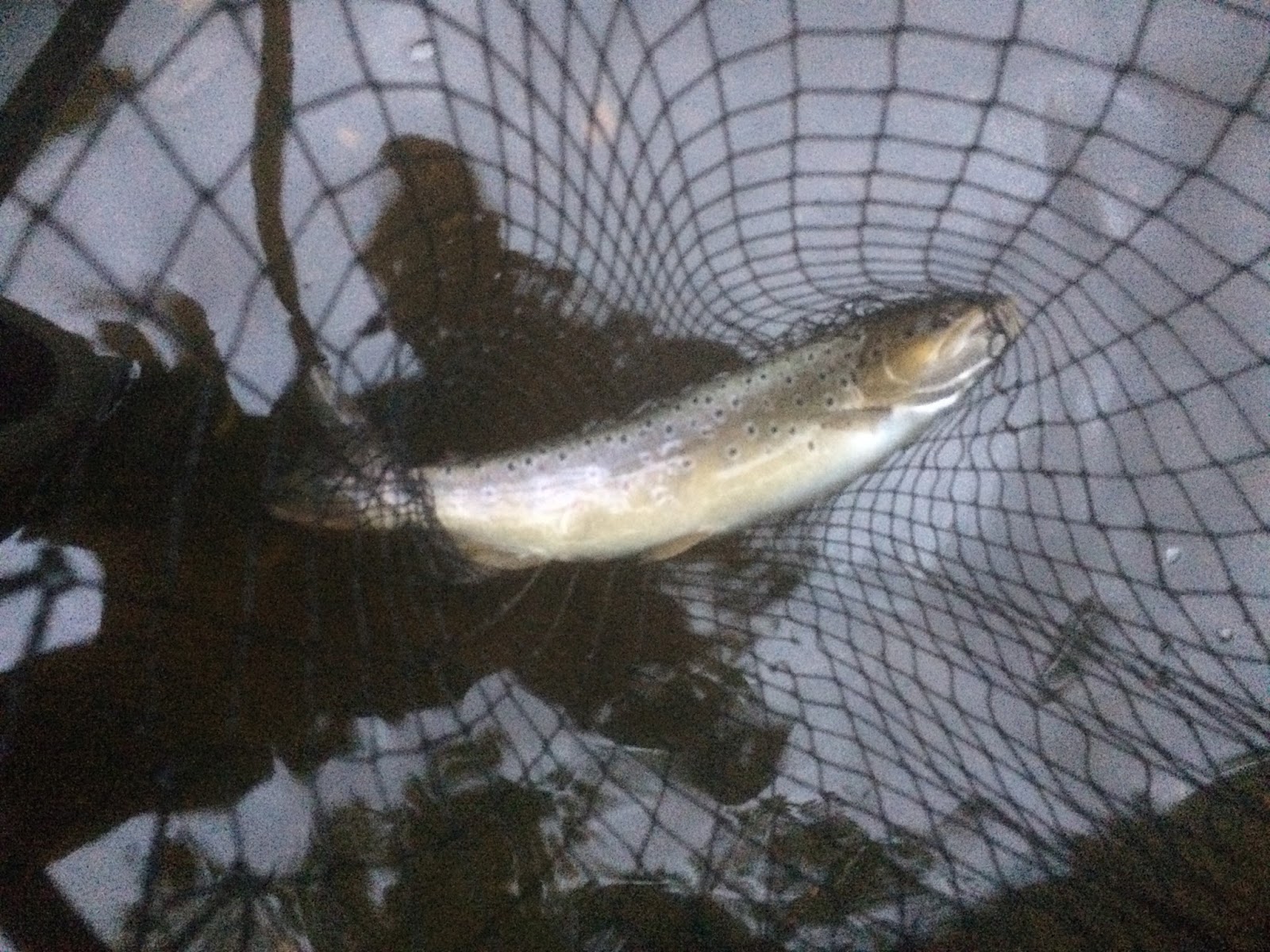